Standing Up to Hate in Donald Trump's America

Under Donald Trump, who used his campaign for hateful indoctrination, it is important for different racial and religious minorities in the US to come together. 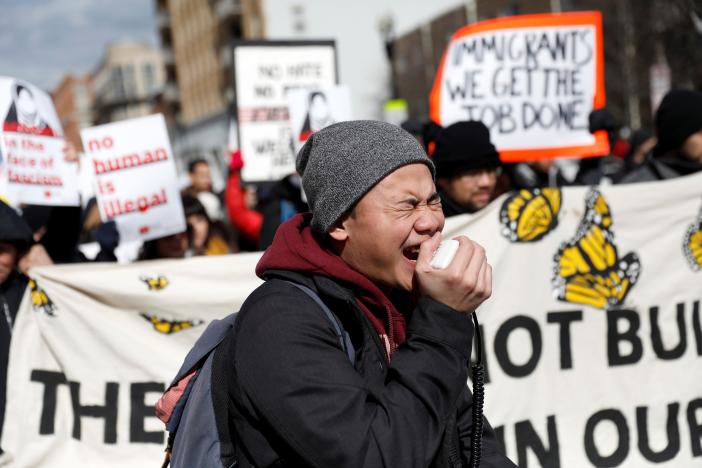 This week, a friend who lives 20 minutes from my home shared that she encountered a hate incident in the middle of a dark street. The incident occurred in California, an American state where one in every five persons is foreign born or an immigrant. Thankfully, the incident did not escalate into a physical fight or crime. But she called the local police anyway, just to inform them in case he were to reappear or threaten her. She could have easily been the Sikh man repairing his car on a driveway who was shot. But it got me thinking about a very important question: how are we going to deal with such encounters?

I arrived at the Justice Department’s website after an extensive online search on ‘reporting hate’. It said that if it is a hate crime, then I should contact the local FBI office. After a couple of operators, an FBI agent was finally on the line with me. I told him right at the start that I was not a victim of any crime but I was just wanted to be prepared about where to report it if a crime were to occur. The agent was quick to clarify that a black man robbing a white man would not necessarily be a hate crime and I told him I understood that part already. He also told me that only incidents involving bodily injury or vandalism with a racial/ethnic or a religious bias would be taken up by the FBI and for other incidents the local police would be my best bet.

But whom should we talk to about incidents like the kind my friend experienced? Do we have any community space to talk about this? For years, the Jewish, Muslim and Sikh communities have held workshops for members on how to deal with hate. The premise then was that hate was specifically targeted. This might be a great moment to expand it beyond specific communities to deal with the sudden ‘outsiderness’ gripping the immigrant communities across the country.

Back in November, a young woman in Fremont, California, went on a hike and by the time she returned to her car, the window was broken, her purse stolen and a hate note left on the seat. 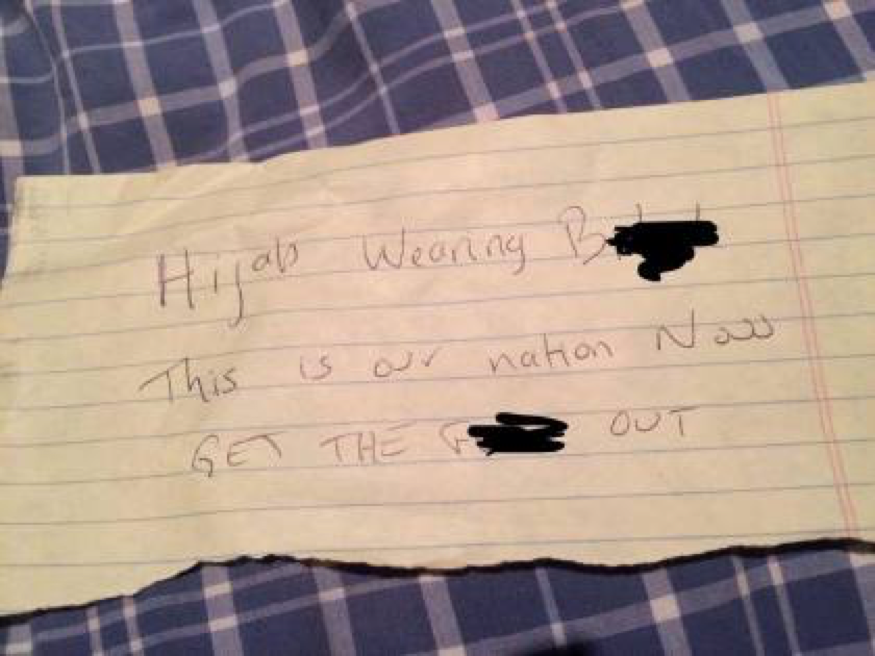 It turns out the woman is not even Muslim and was just wearing a scarf to protect her head due to a skin condition. When asked what she thought had caused the people to vandalised her car, she said, “Fear. I believe they’re being controlled by fear. I believe that fear has consumed them.”

She was absolutely right. US President Donald Trump’s biggest weapon was his ability to create fear and capitalise on fears that have been buried in many American hearts and minds. He associated rape with Mexicans, terror with Muslims, and unemployment with Indian and Chinese technology workers. Trump even got people to believe that all the country’s problems were in immigration control. They believed him because of their own social, financial and religious insecurities.

The US in the 1990s had around 19 million immigrants, a figure that now stands at over 40 million immigrants. Even as the US elected Trump as their president, five Indian-Americans – Kamala Harris, Ro Khanna, Raja Krishnamoorthi, Pramila Jayapal and Ami Bera – were elected to the US Congress. Before them, only one Indian-American had ever served in the US Congress at a time. The landscape of some regions has drastically changed; with immigrant communities came their vibrant extravagant cultures and irresistible cuisines, perhaps causing distress among some Americans who see this as a threat to everything that is American.

On February 22, 2017, 51-year-old Adam Purinton shot Srinivas Kuchibhotla and Alok Madasani, two Indian aviation engineers in Olathe, southwest of Kansas City. Purinton even shot a young American who tried to stop his attack. The shooter was allegedly escorted out of the Bar & Grill after he was seen harassing Kuchibhotla and his co-worker with racial slurs. But 30 minutes later he returned with a gun, allegedly yelling, “Get out of my country”. Hours later, he told a bartender in another restaurant that he had shot two Iranian-looking men. Kuchibhotla died after sustaining bullet injuries.

But did this start with Trump?

Three days after the World Trade Center attack on September 11, 2001, 31-year old Mark Storman shot and killed Waqar Hasan, a Pakistani convenience store clerk in Texas. Six days later, he shot Rias Bhuyian, a Bangladeshi cash clerk at a mini-mart. On October 4, 2001, weeks after the previous shootings, he shot Vasudev Patel, an Indian clerk at another Texas gas station. Storman knew nothing about the men he shot. He had later confessed that he was looking for some Arab-looking men to take revenge for the 9/11 attacks.

The Kansas and Texas incidents are 16 years apart, but it seems like déjà vu. It is not hard to see parallels in the incidents. Purinton and Storman are white American men who were carrying guns as masculine duty – an answer to their social and religious insecurities. Both mistook South Asian men for Middle Eastern or Arab men. Both were racist, misinformed, Islamophobic and ignorant. Both acted in rage, which was constantly fed and reinforced with messages of hatred for people from specific national origins and religious communities as being responsible for terrorism, unemployment and crime. Both killed strangers in public places.

Unlike Storman, who seemed to have derived his motivation from anger post 9/11, Purinton’s anger seems to have stemmed from an election that constantly legitimised racial and religious discrimination, an election and a president that patronised white supremacy by his comments, actions and choice of staff.

Bhuyian, the sole survivor of Storman’s hate crime, said this in his December 2015 blog about Trump’s election campaign: “Your vitriolic, hate-filled rhetoric and ignorance is not only causing others to lose their civil and human rights and dignity, but in some cases, also inciting such abhorrence and violence that innocent people are losing their lives. Freedom of speech is one of the most cherished rights we enjoy, but was not fought for to be used as a blank check to ruin other peoples’ freedom.”

The Southern Poverty Law Center, a non-profit organisation that is known for its hate watch and civil rights work, reported 867 hate incidents between November 8 (election day) and November 18, 2016, through written online submissions and verified media accounts. They also reported that hate incidents were extremely common in two settings where strangers are likely to encounter one another – on the street and in retail establishments, and that schools and college settings were found most vulnerable locations for hate incidents.

Hate incidents against immigrants is not a new phenomenon nor is the constant rise of hate groups in the US. But now it feels apparent. It seems like there is a sense of entitlement in acts of hate. Trump’s campaign had the effect of an indoctrination hate camp where he propagated, replenished and reinforced the idea of intolerance. He brought the devil out of the closet, renewed its vigour, and gave new sense of blame and purpose to the miserable self. He marketed it as a group project, a project that would ‘make America great again’. And those who found their calling dawned a new group identity, an identity that would probably mask their helplessness and loneliness. And while he was finding like-minded partners, the immigrant community switched off their television sets and continued to obtain their degrees, save the hard-earned dollars and try hard to be as American as they can be with the brown skin and thick accents. Kuchibhotla could not be more American. He was sitting at a steakhouse bar watching a basketball game with a co-worker.

Not this time. Looking the other way will not help us this time. We need to recognise and organise. We need to stand up to hate. Our diversity in culture, religion, language and regions never seemed so much like a liability than it seems now. By our own divisions and boundaries, we are isolating each other instead of standing by each other. The other day I received a message about how wearing a bindi on my forehead will protect me from somebody mistaking me for a Muslim. What makes us think that a man with gun who is full of rage, blinded by hate and robbed of logic will see my bindi and abort his madness? When can we open our eyes and see that the Republican Hindu Coalition and Hindus Love Trump was nothing but an attempt to play us against each other and pave away to kill our collective power? I hope Trump’s desi manager Shalabh Kumar is watching that the first organisation to condemn the Kansas shooting was the Center for American-Islamic Relations. That attacking a Jewish cemetery, a woman in a hijab or a South Asian man in a bar is all the same. It kills them and death has no dominion.

It is time to build community groups beyond our faiths but rooted in our fears and dreams. It is time to create advocacy resources that educate and busts the myths about immigrant communities. We need to step in and take up local leadership roles beyond our Bollywood nights and Diwali parties. Remember, divide and rule is an old trump card. We can’t fall for it all over again in a different country.