If there is no material justice and investment in healing the harm enacted onto South Africans over generations, the rot in the country's wounds will bear them down. 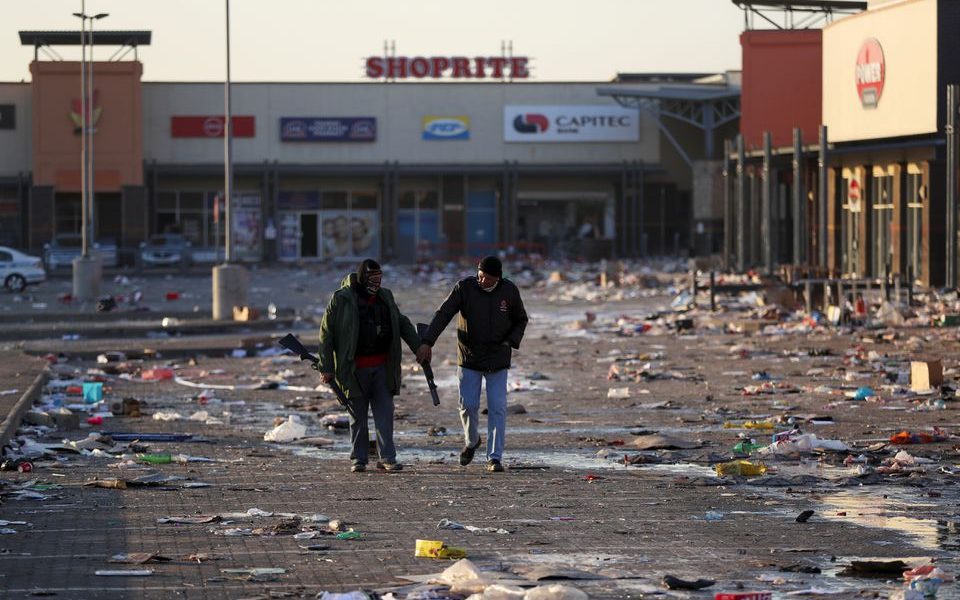 Social unrest”– though others may prefer “riots and looting,” “food riots,” or “insurrection”– have swept South Africa since early July. It’s unsettled an already unsettled nation. And as with all South Africa’s heightened moments, our historic fault lines have been re-exposed. Racial and ethnic divisions, class antagonisms, xenophobia, questions of violence and its use. These are some of our wounds that have never been treated.

Over the last decades we’ve covered them with patriotic bandages, unity slogans and surface-level performances of a shared national consciousness. But the wounds have opened again now and as the country bleeds, the rot is open for all to see. Flashing moments tell an incomplete but tragic story of the reality unfolding in our country.

Impoverished communities with limited prospects rejoice as they leave megastores with stolen food and essential resources. Elderly women are seen taking medication that they otherwise could not afford. A father exits a store with nappies (diapers) for his child. Families that have struggled with eating daily meals suddenly have food for a month.

Elsewhere, in the historically Indian community of Phoenix, an elderly man is surrounded by people from a nearby  informal settlement. He is commanded that he needs to hand over his home or otherwise will face attacks on his family in the dead of night. In the night, drive-by shootings claim lives as stray bullets shatter family homes.

Armed Indian and white “vigilantes” drive around shooting African people they assume are looters. Hunting them down while recording vicious videos, beating them with sjamboks (heavy leather whips) as the person begs for their lives.

These videos are shared and watched repeatedly across social media, racially charged viewers salivate with a carnal sense of pleasure as one racial group watches the other suffer and bleed.

At least 15 people are killed by armed community members of Phoenix. They blockade roads entering the community, racially profiling people, preventing them from access to functioning supermarkets. Bodies are found in the night. #PhoenixMassacre trends on twitter echoing disgust and outrage at the anti-black sentiment within the South African Indian community.

Thapelo Mohapi, the spokesperson of Abahlali BaseMjondolo, the shack dwellers movement in KwaZulu-Natal that safeguards working-class interests, had his home burnt down on Wednesday morning. Mohapi, like most in Abahlali, is outspoken against ANC corruption and political violence in the country, with Abahlali members often the targets for political killings. The excitement of people getting access to expensive TVs, furniture, alcohol and commodities they would not be able to access otherwise. Because in South Africa we know that nice things are reserved for a minority – and you either have to be crazy lucky and gifted or crazy devious and connected, to escape the poverty cycle.

This is the status quo of our neo-colonial, violent and divided country. Every snapshot from the riots reveals a new layer of a tragedy we’re all too familiar with but have made no substantial material effort to address to this point. And now the rot in our open wound has become septic.

In the midst of all this mess and complexity, many are now left trying to make sense of where they stand regarding these riots with the mask of a shared national consciousness being ruthlessly peeled back. Some who thought they understood their political standings are having to rethink their position after being thrust into a violent situation where racial and class perceptions pre-determine their position for them.

Also read: Unrest Is Being Used To Subvert South Africa’s Democracy: Giving In Is Not an Option

A central question on people’s minds is who is responsible for the unfolding events. How much of it is orchestrated as part of the #FreeZuma campaign that sparked this moment with former President Zuma’s arrest and how much is simply an overflow from the desperate situation a majority of South Africans find themselves in. The reality is, of course, complex. Reports from activists on the ground and observers indicate the riots are likely made up of multiple forces.

Some are believed to be political agents of the pro-Zuma faction of the African National Congress (ANC), using chaos to fight their battle against President Cyril Ramaphosa. These agents are known to have organised the initial demonstrations and are believed by some commentators to continue funding transport for rioters and operating in the background to hamstring the local economy. Some now attribute this orchestrated terror with the targeted burning of key distribution centres, factories, network towers and trucks.

Others involved are not politically linked to a factional ANC agenda or desire to destabilise the country. They are there because the moment has presented families with access to food under dire circumstances and the opportunity for temporary relief from the dredges of poverty.

One may say that their situation is being purposefully manipulated by political agendas, but the material reality of their situation is no less real. Individuals from well-known working class organisations that are strongly anti-ANC in all forms have reported taking part in looting as the moment allowed for sorely needed aid to struggling communities.

And of course, with any mass gathering, there are simply those criminal elements who use the moment with malicious intent, stirred by past and present grudges, looking to impose power and fear on those they see as “other.” Yet, these malicious sentiments exist on both the “sides” of the rioters and those responding to them.

It is every person’s right and entitlement to defend themselves, their family and personal property from harm against malicious forces. But much of this defence and protection of what is dear  has morphed into older desires to harm, dehumanise and kill those considered “other.” How much of our violence in the name of defence is rooted in the historic rot we’ve left untreated from colonialism, apartheid and a world that hates poor people?

Many are in support of the President Cyril Ramaphosa’s position that the army be deployed to quell the riots, looting and violence. They argue for an armed, militant and potentially lethal response.

Part of this rationale is in response to the signs of orchestration and mobilisation by pro-Zuma political forces. As some of the actions show signs of being organised and targeted strikes, they will not subside organically and so the use of intelligence and organised force would be necessary to intervene. This tactical move acts in support of the President Cyril Ramaphosa and preserving the current status quo of South Africa.

The other reason is that the racial conflict between communities has reached such a heightened state that many fear an echo of the Durban Riots of 1949. With armed vigilantes enacting destruction, racial profiling and vicious killing onto those they brand “looters”– and the responsive revenge cycles this opens up – there can be no road that does not lead to further death. And right now, there is no Steve Bantu Biko and his dear friend Strini Moodley to lead us back on the path towards a more human face.

However, even in the face of this leadership vacuum, military intervention is short sighted, ahistorical and temporary at best. The wounds are all open now, the military cannot heal, only repress.

Ultimately the scale and intensity of these riots have very little to do with political infighting within the ANC and the tensions between communities could not be set alight if there was not already kindling of unresolved tensions. The material conditions of South Africa indicate that it’s been ripe for mass political uprising for years now.

With grants cut under lockdown, youth unemployment over 70%, service delivery a mess or none existent, trust in government, media and political parties at record lows, there seems to be meagre hope for South Africans on the wrong side of the poverty line – and very little to lose.

Whether it’s an orchestrated plot by devious political agendas, a student throwing poop on a colonial statue or an increase in bread prices as was seen in South America, a spark is all that’s needed to set alight a desperate people.

The best case scenario with military intervention this time is further repression of people’s material frustrations. If people die, the situation becomes further inflamed. When the next spark goes off the riots will be more organised, with living memory of the injustices of this moment. And if not organised by our dysfunctional Left, it will be led by reactionary forces.

Most dangerous of all is, as with other examples from history, as military forces play a greater role in a country’s internal policing, they become more used to enacting power over its populace and ambitious autocrats rise up their ranks in military command.

With military intervention, we admit that the violence and death that will be enacted on the working class populace is worth a return to South Africa’s abnormal normal. The violence of this moment simply transferred back to those who held it silently a week ago.

Repression and military enforcement of a violent status quo is not the answer. Material conditions need to change, people need to be fed, grants need to be returned and our septic wounds that have laid open for centuries need urgent attention.

If there is no material justice and investment in healing the generations of harm enacted onto us – and by us –the rot in our wounds will overcome us. And we will become the rot.

This article was first published on Africa Is a Country and is being republished via Progressive International.