The protestors distributed leaflets and rang the fire alarm, forcing participants to evacuate the venue. 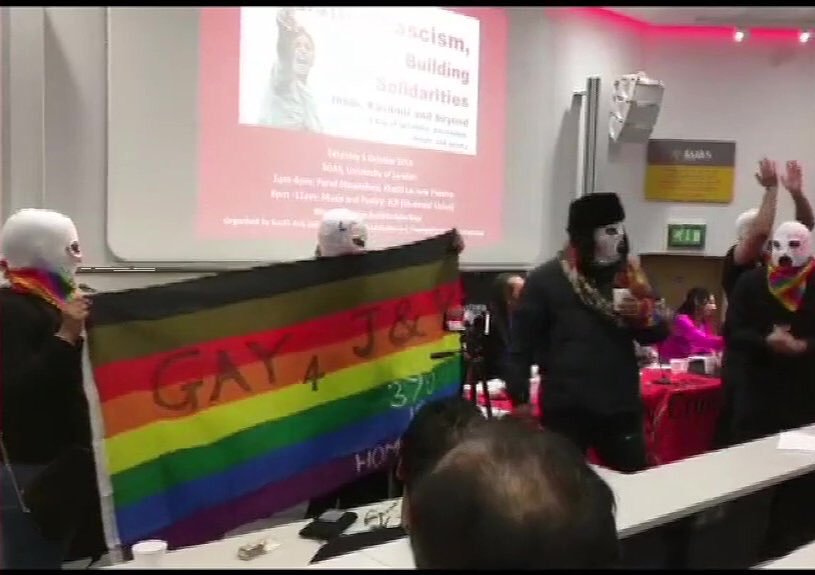 New Delhi: On October 5, an event held at the School of Oriental and African Studies at London University in solidarity with the people of Kashmir was disrupted by masked protestors chanting, “Gay for J&K”.

The event – ‘Resisting Fascism, Building Solidarities: India, Kashmir and Beyond’ – was organised by the South Asia Solidarity Group, which intended it to be a day-long affair designed to draw attention to the situation in Kashmir and the ‘slide into fascism’ in India.

Panelists included Communist Party of India (Marxist-Leninist)-Liberation leader and feminist activist Kavita Krishnan, who recently returned from a fact-finding mission in Kashmir with a report outlining allegations of torture.

According to Krishnan, the event was disrupted by the entry of approximately five protestors wearing masks, and holding aloft a rainbow flag on which was written, ‘Gay for J&K’. The protestors distributed leaflets saying, ‘Regressive Left, Don’t Betray Us Please’. They then rang a fire alarm after being asked to leave, forcing the participants at the event to evacuate the venue. The organisers and their audience then continued the event outdoors.

The speakers decided to continue their speeches outside! Audible to ALL! Here is @kavita_krishnan continuing her speech on how BJP govt is treating Kashmir & why we need intl support to fight fascism in India. (Was reminded of her first speech I heard in Delhi, inspiring as ever) pic.twitter.com/XEPcPFgR0X

The masked protestors at the event appear to have been operating on the premise that Article 370 of the Indan constitution excluded any amendments made to Indian law, thereby rendering Section 377 of the Indian Penal Code – which outlawed homosexuality till the Supreme Court struck it down last year – operational in its former iteration.

So proud of my #LGBT brothers & sisters in london who called out #Article370 for the vile homophobic trash it is at the communazi Kavita Krishnan & Nitasha Kaul event SOAS #Gay4JandK pic.twitter.com/KTmX6cWuKC

Section 377 of the IPC is a colonial-era law that criminalised ‘carnal intercourse against the order of nature’ and was used to penalise homosexual relationships. This was read down by the Supreme Court on September 6, 2018, in a landmark judgment that was widely seen as a step towards ensuring equal rights to citizens regardless of their sexual orientation.

Article 370, which granted special constitutional status to Jammu and Kashmir within India until it was read down in August, was called ‘homophobic’ by the protestors – presumably under the impression that the legal autonomy it gave Kashmir extended to the state being able to ignore the Supreme Court’s verdict. Before both houses of parliament voting to amend Article 370 so as to render it a dead letter, criminal law in Jammu and Kashmir operated under the Ranbir Penal Code, which was framed along the same lines as the Indian Penal Code in 1932.

Right-wing narratives have pushed this argument, with an op-ed in OpIndia asking, “Why was homosexuality still a crime in J&K despite the SC judgement last year? Because of Article 370. Now that gay people have rights in J&K, how are liberals trying to block them?”

Two great leaps for India’s LGBTQIA community in the last one year.
One, consensual gay sex decriminalised. Two, end of #Article370 means now that law applies same-sex couples in Jammu, Kashmir and Ladakh.
Both under a ‘Hindutva’ government. #StandWithPride

However, legal experts have explained that these claims were inaccurate.

Justice Hasnain Masoodi, who retired as a judge of the Jammu and Kashmir high court in 2016, said that the diluted version of Section 377 did indeed apply to J&K because regardless of Article 370, Article 171 states “the law declared by the Supreme Court to be binding on all courts within the territory of India”. Others also pointed to a 1995 ruling by the Jammu and Kashmir high court which said that if the Supreme Court invalidated a law that was mirrored in the state’s books, this would be directly applicable to the state.

Also Read: The False Link Between Article 370 and Queer Rights

Protestors at the event also seemed to suggest that the scrapping of Article 370 in and of itself, would guarantee rights to LGBTQ citizens – despite the fact that the Indian government, unlike the judiciary, has been far from supportive of LGBTQ issues. 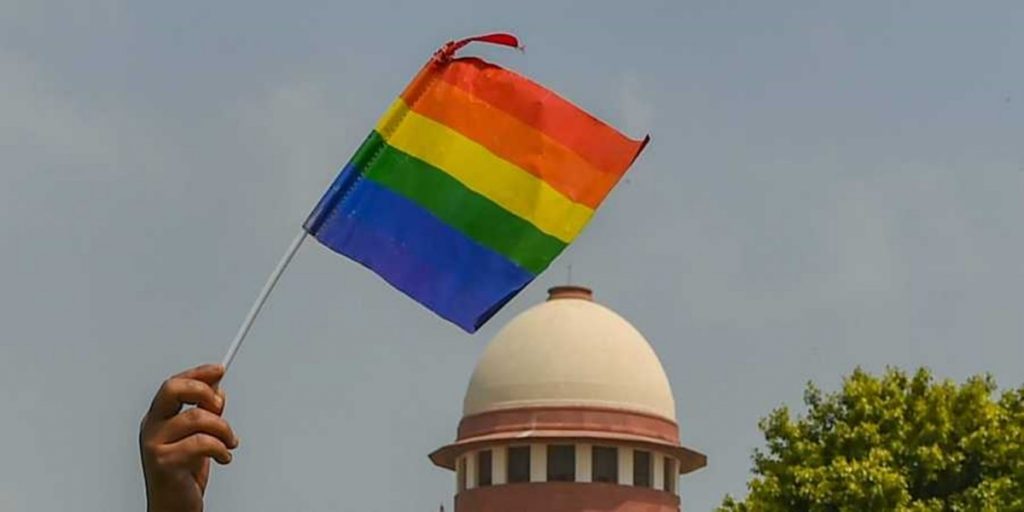 In fact, in its submissions to the apex court on the issue, the government explicitly requested the court to restrict itself exclusively to the constitutionality of Section 377 and abstain from passing judgment on any other issues or rights pertaining to the LGBTQ community. In 2015, Congress MP Shashi Tharoor had also attempted to move a Bill in parliament to decriminalise homosexual intercourse, which was not allowed to be tabled, after vociferous opposition by members, predominantly the BJP, the Economic Times reported.

The Indian Army, which has seen a huge increase of boots on the ground in Kashmir following the reading down of Article 370, has also gone on record earlier this year to say that the decriminalisation of Section 377 may not be implemented by the army, with army chief General Bipin Rawat saying that  “such actions” (i.e. homosexual relations) were forbidden in the Army, and “We will not allow this to happen in the Army.”

Protestors also seemed unaware of the fact that one of the main speakers of the panel that was disrupted was Professor Dibyesh Anand, a queer activist who focuses on queer intersectionality.

I am indeed proudly queer, anti fascist, in solidarity with occupied people. Maybe these masked disruptors claiming to be #Gay4JandK should come to my class on Queer Now and intersectionality that I will take in a couple of hours https://t.co/B4ivvsjlu9

He said, “I can bet these disruptors are not queers; if they were, they would be in solidarity with all oppressed,” India Today reported.

Kavitha Krishnan also claimed that the protestors belonged to the RSS and were ‘masquerading as queer activists’, though there is no evidence that this is indeed the case.

Curiously, many media organisations in India joined the masked protestors in questioning the motives of the SOAS event’s organisers.

NewsX described the event as part of an ‘anti-India lobby’, with newscasters going on to refer to Krishnan as a ‘known Modi baiter’ and repeatedly referred to the event as a ‘closed-door meeting’ despite it being advertised as being free for entry.

Writing in The Wire last month, Anish Gawande noted the “irony … that the repercussions of this government’s removal of Article 370 have hit the LGBTQ+ community in Jammu and Kashmir hard”, especially the loss of access to the internet – one of the predominantly safe spaces afforded to LGBTQ+ youth in the state.