Quebec Mosque Killings Are Horrific, But Not Surprising

Quebec has its share of extreme right groups and trash radio that spew out hate against immigrants, particularly Muslims.

A woman holds a sign reading "let's unite against hate!" as people attend a vigil in support of the Muslim community in Montreal, Quebec. Credit: Reuters/Dario Ayala Montreal: Sunday evening seemed headed for a quiet end when a news headline caught my eyes as I was getting off the internet: there had been a deadly shooting in a mosque in Quebec (City), the capital of the French-speaking Canadian province, Quebec.

When I conveyed the information to my French-Canadian partner, he said, “It’s terrible, but unfortunately not that surprising. There have been these radio stations doing anti-Muslim propaganda and spewing hate for ages.”

He was referring to what some call “la radio-poubelle” (trash radio), like CHOI-FM, that fill the airwaves with blood, gore, sex scandals, while denouncing the Left, intellectuals, the bureaucracy and immigrants, particularly Muslims.

The shooting that killed six, gravely injured five and affected 12 others took place at 7:45 pm on Sunday, January 29. Soon after, Philippe Couillard, the prime minister of Quebec, Canadian prime minister Justin Trudeau and Régis Labeaume, the mayor, issued statements. Around 12:45 pm, Quebec citizens spontaneously assembled in front of the mosque and several supportive hashtags sprung up on Twitter.

By next morning, a notice for a vigil in Montreal had appeared on Facebook and by 10 am, 8,700 said they planned to attend. There were many shares. Someone had put up a map on the same page announcing vigils in many provincial towns – Sherbrooke, Boucherville, Québec City, Saguenay, Trois-Rivières – in Quebec, as well as in Ontario, and even Paris and Hong Kong.

The killings appear to be the work of what has become the typical “lone wolf” killer. Alexandre Bissonnette, 27, described as having “pro-Le Pen and anti-feminist positions”, was charged with six counts of first-degree murder and five counts of attempted murder while using a restricted firearm.

Many racist incidents have taken place in Canada post Donald Trump’s win in the US presidential election and there has been a temptation to point south.“… I hold Trump partly responsible,” said MP Amir Khadir, who represents Québec Solidaire, a Quebec Left party most sympathetic to immigrants.

Others pointed out that this might be too facile. A post on Facebook said, “Islamophobia, racism and xenophobia live here in Québec, so let’s refrain from pointing the finger south of the border and blame others for that which we are responsible. It’s time we all stood up and denounced this hatred.” 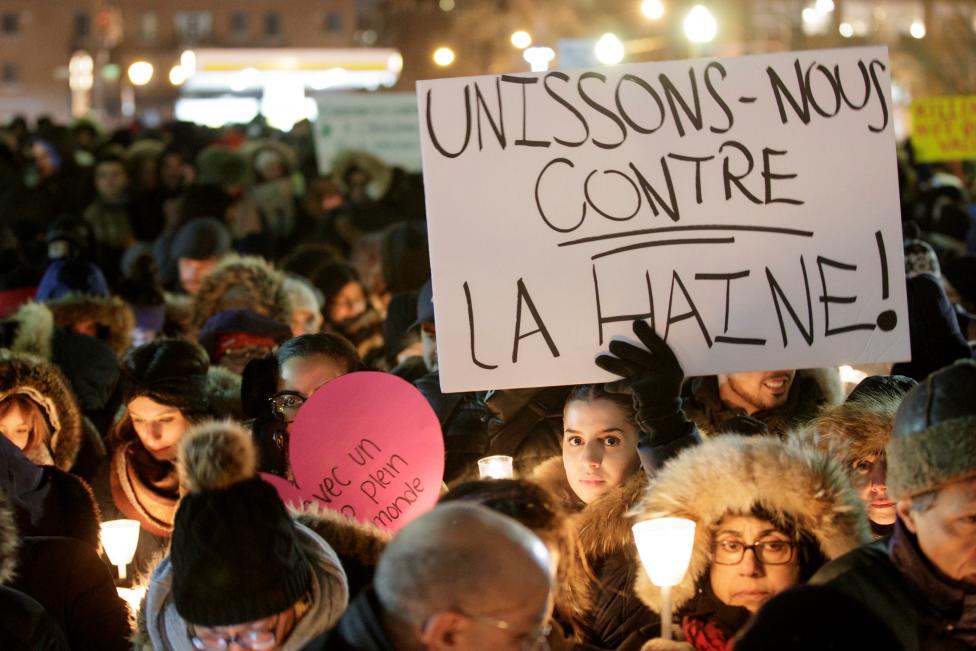 A woman holds a sign reading “let’s unite against hate!” as people attend a vigil in support of the Muslim community in Montreal, Quebec. Credit: Reuters/Dario Ayala

The mosque where the killings took place has been the target of Islamophobia more than once. Seven months ago, someone left a pig’s head in a bag there with the words bonne appétit (enjoy your meal). And, along with other mosques in Quebec City, it was targeted with a message saying, “Islam, get out of my home,” in 2014. Many other incidents of this sort are reported across Quebec and Canada, along with hate crimes aimed at Muslim individuals.

Darryl Leroux, associate professor, department of sociology and criminology, Saint Mary’s University, Halifax, Canada, pointed to systemic factors like the Hérouxville Code of Conduct (2007), the Bouchard-Taylor Commission’s reasonable accommodation of religious minorities (2007-2008), the “Quebec values” immigrant contracts (2009), the City of Gatineau’s Guide for Immigrants (2011) and the Québec Charter of Values (2012). All these were ways to work out a framework of local values with distinct implications for immigrants, particularly Muslims. All became controversial.

Meanwhile, Michel Juneau-Katsuya, former Canadian Security Intelligence Service agent said in Journal de Montreal, a Montreal-based newspaper, that “some media” and “the rise of populist politics” are not unrelated to the shooting at the Grand Mosque in Quebec City on Sunday. Other commentators echoed this sentiment.

There has been a rise in extreme right groups like the secretive La Muete (with reportedly 43,000 members), Justiciers du peuple, PEGIDA Quebec, Soldats d’Odin and Atalante Québec, allied to the Fédération des Québécois de Souche (FQS). They all espouse “Quebec values,” and anti-immigrant sentiments, patrolling Muslim neighbourhoods to ensure security, among other acts. Some of them say they fear the imposition of Sharia here. Atalante openly advocates a “renaissance of the neo-French in Quebec.” The FQS, founded in 2007 by Maxime Fiset, aims to unite the province’s fragmented skinhead community. Rejecting traditional conservative political parties, these groups draw inspiration and justification from American and/or French extremist groups.

The Quebecois have emerged from the vice-like grip that the Catholic Church had on nearly all aspects of their lives in the 1960s. This has left the province with a strong distrust of religion. Quebec also believes in the French tradition of strict separation between church and state more firmly than does the rest of Canada. While more social-democratic in its views, its relationship with its immigrants is complicated by its perpetual fear of its distinct identity being swallowed up by the Anglophone North America.

In the aftermath of the shootings Muslim immigrants talked about how the way they are viewed changed after 9/11. While some maintained that they would strive to live in Quebec, in harmony, others felt that it was getting unsafe enough to contemplate returning to their home countries, despite living here for decades.

There are a couple of bright spots. A 2015 survey by the Quebec Human Rights Commission showed that while some of the older people were prone to express Islamophobic or racist attitudes the young people are essentially blind to colour and race.

The solidarity displayed in the vigils across Quebec, Canada and beyond also shone bright. I attended a massive one in Montreal with banners, speeches and collective slogans, all of which helped. It was a heartfelt call to reject divisiveness, hatred and violence and stand strong and resilient, together.

Veena Gokhale is a Montreal-based writer and journalist