According to a ship-tracking service, the MV Ever Given is seen surrounded by at least six tugboats, with more on the way. 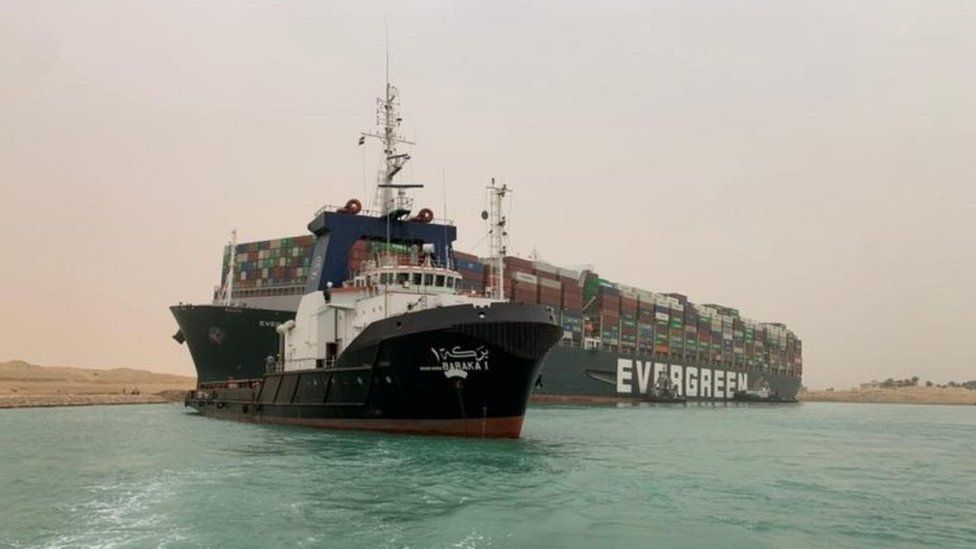 This story was first published on March 24, 2021 an 1440 IST and has been updated as of 1425 IST on March 25, 2021: Marinetraffic.com satellite map shows the ship is still stuck, with tug boats trying to move it. The Cairo-based newspaper, Al Ahram, quotes an expert at the Norway-based quality assurance company DNV GL Ashraf Belal as saying operations to free the ultra-large container ship “may take several days”.

New Delhi: While Bengaluru and New Delhi are notorious for traffic jams that can last for a few hours, especially if it’s raining, they don’t really affect global oil prices or cause a logistical nightmare worth millions of dollars. But some traffic jams can, like the one currently going on in the Suez Canal – the narrow waterway connecting the Red Sea to the Mediterranean Sea which saves ships from Asia and East Africa going around the Cape of Good Hope in South Africa to enter the Atlantic.

For the two days  now, a vessel named Ever Given has been wedged sideways in the Suez Canal, holding up dozens of ships behind it and pinching the supply of important goods between continents. According to shipping news website gCaptain, Ever Given is one of the world’s largest ultra-large container vessels in operation, with the capacity to carry 20,000 containers (20 ft x 8 ft x 8 ft) at a time. And right now, it looks like this: 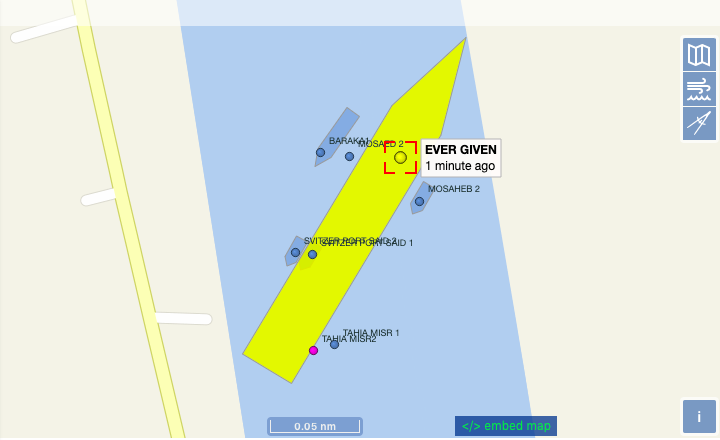 As of 2:35 pm IST, the Ever Given was still holding up traffic through the canal, causing a pile up of ships behind it. According to various accounts on Twitter, including photographs, its efforts to wriggle free could be impeded by a strong wind blowing through the canal as well as thanks to the ship’s bulbous bow having run aground, becoming a literal sticking point. On ship-tracking service VesselFinder, the Ever Given is seen surrounded by at least six tugboats, with more on the way.

How big is this #SuezCanal plug? Ultra big.

One of the largest container ships in operation. pic.twitter.com/rJunpJrAKE

AFP also reported more than a hundred ships were waiting to enter the canal while, according to another source, nine others that had already entered the canal were in for a wait.

The Suez Canal is operated by Egypt. It was built in a decade from 1859 and became operational on November 17, 1869. Its termini are marked by Port Tewfik and Port Said. After a series of enlargements and upgrades, the canal was 193.3 km long, 24 metres deep and 205 metres wide in 2010. Ships moving through can have a maximum width of 77.5 metres.

Until 2010 at least, the official data indicated the canal hosted 47 ships a day. The Egyptian government reportedly made more than $5 billion from the trade route in 2020 alone.

Cairo24, a local Egyptian news website, quoted a worker at the Suez Canal saying that a “sudden technical failure” of the ship’s “machines” caused the vessel to hit land on both sides of the canal, jamming it. The worker also said canal authorities had deployed cranes to move the sand where the ship had breached land. If this didn’t suffice, authorities would try again after reducing the ship’s load and will finally, attempt to move Ever Given out of the canal entirely, according to Cairo24.

Vessel details on MarineTraffic say the MV Ever Given was built in 2018, is 400 m long, 59 m wide and flies under the flag of Panama. (‘MV’ stands for ‘merchant vessel’.)

Also Read: What Do the Coastal Disasters of Beirut and Mauritius Have in Common?

As it happens, most ships sail under the flag of Panama in order to skirt marine regulations in force in most other countries and to avail tax benefits. This is why the small country of Panama – which also hosts the Panama Canal between North and South America – has over 8,000 ships under its flag, versus around 4,000 for China. Ever Given itself is operated by a Taiwanese company called Evergreen Marine Corp.

According to VesselFinder, Ever Given set off from China and called at Port Tewfik at 9:47 am IST on March 23. It was slated to reach Rotterdam, in the Netherlands, at 7:30 am on March 31.

According to S&P Global, the Suez Canal is a “strategic route for crude oil, petroleum products and LNG shipments” and that “almost 10% of total seaborne oil trade and 8% of global LNG trade passes through” it. So thanks to Ever Given‘s ill luck, Bloomberg reported that the price of oil futures in New York had climbed 1.3%, although experts conceded this is likely to be temporary.