Not only do they have similar news, all these 265 outlets have coverage of the same anti-Pakistani events and also republish content from the wider influence network, an EU NGO has observed. 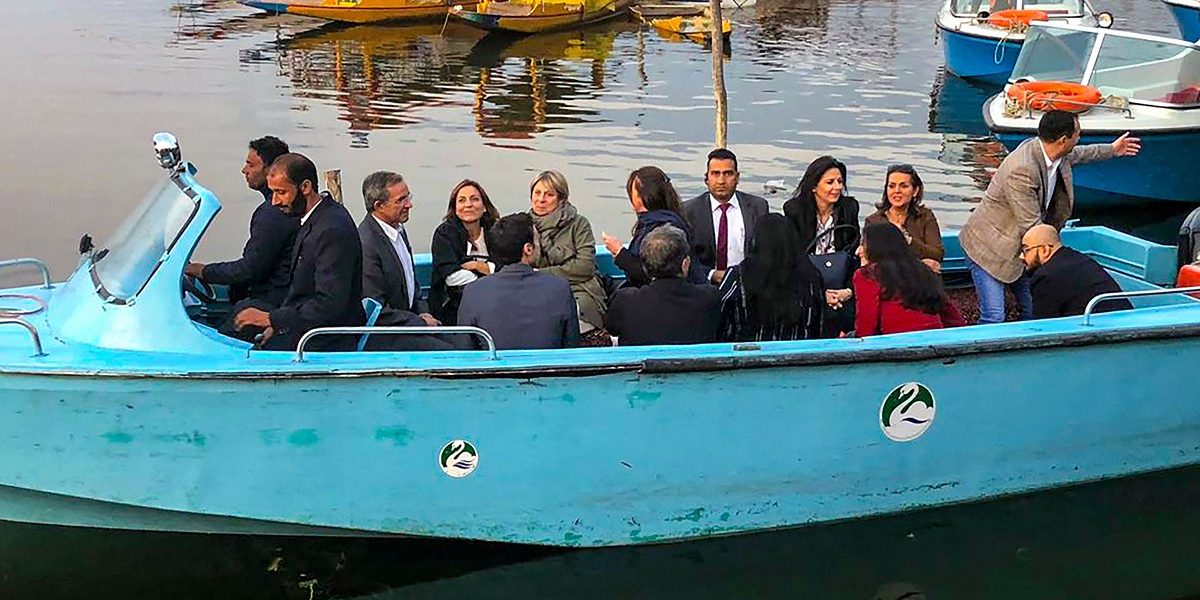 The MEPs take a ride on the Dal Lake on October 29. Photo: PTI

New Delhi: An EU non-profit group researching disinformation campaigns has said that the controversial European parliamentarians’ visit to Kashmir is linked to a network of fake local media networks and think-tanks across the world.

Last month, the Indian government allowed a group of Members of European Parliament, a majority of whom were from far-right parties, to visit Kashmir for the first time since the state was put under lockdown following the reading down of Article 370. It turned into a political controversy, with opposition parties questioning the decision to allow foreign visitors to Kashmir when Indian members of parliament are being forced to return from Srinagar airport.

It was soon revealed that the MEPs were invited by a UK-based NGO, Madi Sharma, with the written guarantee of meeting with the Indian Prime Minister Narendra Modi. A leaked invitation letter also showed that the sponsor of the trip was a Delhi-based ‘think tank’, International Institute of Non-Aligned Studies (IINS).

As per IINS’s website, the institute is backed by the little-known business house called the Srivastava Group. The Wire had revealed that filings with the Registrar of Companies show that the firms in the Srivastava group do little or no business.

The Srivastava group also runs a publication, New Delhi Times, which is based on the same address as IINS, in South Delhi’s Safdarjung Enclave.

Also read: Doval’s Dog and Pony Show for MEPs Is a Disaster for Indian Diplomacy

Earlier in October, much before the MEP visit, European External Action Service’s East StratCom had found that a website, EPtoday.com, which purports to be a magazine for European Parliament, had been republishing articles from state-run Russia Today.

Following the report on EP Today, an independent Brussels-based non-profit, EU DisinfoLab found intriguing cyber fingerprints to link the website that targets European parliamentarians with the New Delhi-based Srivastava group. They also noted that the website could be described as largely about “how to hide your Indian interests behind American and Russian content”. EPToday.com was also republishing articles from Voice of America.

Fast forward one month – and EUDisinfoLab asserts that EPtoday.com was just the tip of the iceberg. In a new study, the group has claimed that it has uncovered “265 fake local news sites in more than 65 countries are managed by an Indian influence network”.

The non-government organisation said that it started further investigations by looking into the antecedents of ‘timesofgeneva’.com’ which had got the same content as EP Today and also reported on anti-Pakistan demonstrations.

Last week, EUDisinfoLab had tweeted a thread to show how Times of Geneva was part of the same network that includes Srivastava Group  and NGOs like Pakistani Women’s Human Rights Organisation and European Organisation for Pakistani Minorities. Both their websites, as listed by EUDisInfoLab, are currently non-functional.

The non-profit group said that digging into EP Today and Times of Geneva also led to a ‘fake news agency’, 4newsagency.com. It found that the agency’s tweets and YouTube videos were largely about covering events and demonstrations highlighting the plight of minorities in Pakistan.

Looking more into the servers that hosted EP Today and Srivastava group, EUDisinfoLab found out that there were additional “265 resurrected media in more than 65 countries”.

As per the European NGO, all them had some common elements. For example, they are named after an extinct local newspaper or spoof real media outlets.

They republish content from several news agencies, including Voice of America, Russia’s Interfax and North Korea’s state-run agency KCNA. The presence of KCNA among the other two agencies may be due to the long-standing association of the late founder of Srivastava group with the hermit state, as reported by The Wire.

Not only do they have similar news, all these 265 outlets, whether pekinggazette.com or theseattlestar.com and timesofpyongyang.com, have coverage of the same anti-Pakistani events and also republish content from the wider influence network, EUDisinfoLab observed.

The group proposed multiple aims for creating this network of fake outlets – ranging from influencing international institutions and elected representatives to creating layers of sourcing which make it “harder for the reader to trace the manipulation”. It also suggested that another possible motivation could be to “influence public perceptions on Pakistan by multiplying iterations of the same content available on search engines”.

“We will publish an extensive report in the coming next weeks,” said EU DisinfoLab