Manhattan: A Walk Through Chinatown's Forgotten History of Struggle, Resistance

Although it is exoticised in popular perception, Chinatown in Manhattan has indeed been a site of long-drawn labour movements and mass struggles by Chinese immigrants. 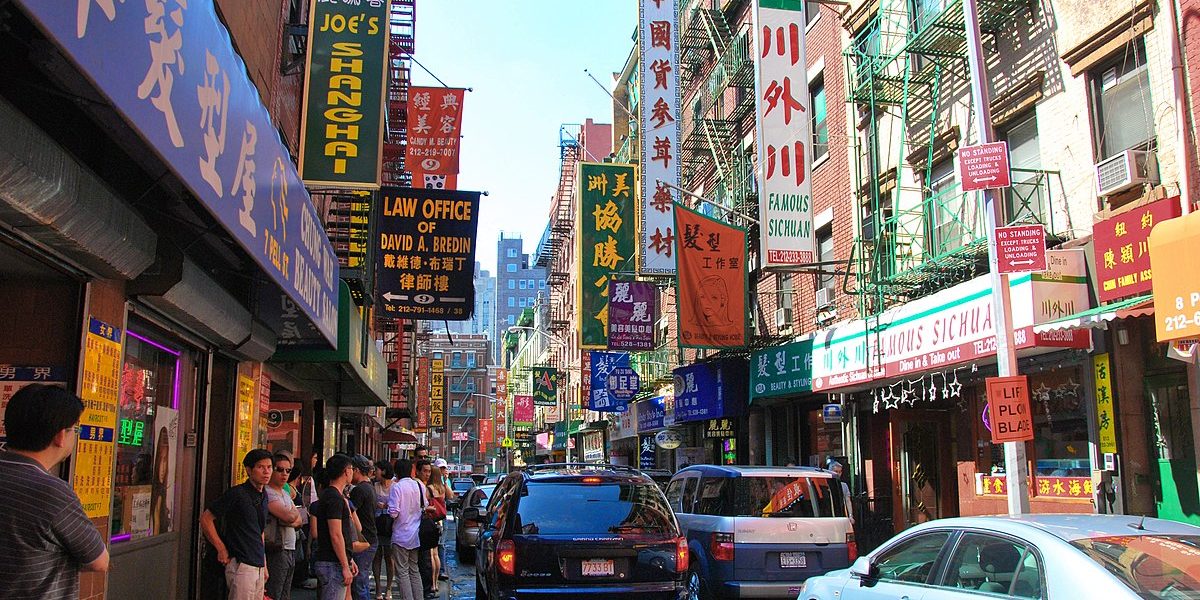 A couple of months ago, standing on the densely packed corner of Doyers and Pell streets, the oldest part of Manhattan’s Chinatown, I stopped for a few minutes to eavesdrop on a walking-tour guide talking to a group of tourists about the “bloody angle,” a bend in the two-hundred-foot-long block in front of the old Chinese Opera House on Doyers Street where Chinese tongs, family-controlled gangs, fought and died over control of gambling, prostitution, and opium in the early 1900s.

The Chinese Exclusion Act of 1882 and other laws made even illegal immigration by all but a few women impossible, leading to an enormous gender imbalance in Chinese communities in the United States and the creation of a bachelor society. That did not begin to change appreciably until the opening of immigration in 1965. Before they became more elaborate, dim sum restaurants, with small plates and communal tables, emerged to serve single men. So did a trade in Chinese sex workers, many of whom were sold into sexual slavery. That was the story this tour guide told.

All true. But the violent and salacious anecdotes the guide chose to tell, standing alone, fit into a narrative of exoticism, giving the impression that the Chinese immigrants were strange and savage. The story he ignored was sitting in plain sight, one that was both more inspiring and complicated in the longer history of Manhattan’s Chinatown. A group of scholars, history professionals, and labour and social justice activists set out to tell that story.

This year marked the beginning of a new project I cofounded called ‘People’s Heritage Tours’. In partnership with several social justice organisations, we offer walking history tours that highlight specific events and social movements related to the ongoing work of our partners. A portion of each ticket sold goes to those groups that also help promote the tours. The tours are based on current scholarship and primary source research and, when possible, involve veterans of historical moments.

Our Chinatown tour was created in partnership with Labor Arts, an online exhibition space and repository for documents and art related to working-class struggles, and it was developed with May Chen, a former vice president of the Union of Needletrades, Industrial, and Textile Employees (UNITE). The tour centres on a strike by thousands of garment workers in the summer of 1982, a strike organised largely by immigrant women who helped change the course of labour relations in the industry, the role of Asians in the American labour movement, services to the Chinese community, and their own lives.

On loan from the Hotel Employees and Restaurant Employees (HERE) union (which merged with UNITE in 2004 to form UNITE HERE), Chen had been an organiser of that strike. No one expected these women to mobilise in a sustained militant show of strength — not the employers, not their union, not even themselves. So why did they?

We begin our tour across the Bowery from Doyers Street at Confucius Plaza, a massive forty-four-story New York State – subsidised cooperative apartment building housing nearly eight hundred families, which was completed in 1975. In less than a decade after Chinese people were able to immigrate in large numbers, their political power in the city and state grew to the point that they could demand the project. But the developers refused to hire Chinese workers. A group called Asian Americans for Equal Employment (AAEE) formed in 1973 and began to organise demonstrations in 1974, when negotiations with the developer broke down. By the spring of 1974, more than 50 people had been arrested in increasingly militant actions, and construction stopped. The developer relented and hired more than two dozen Chinese construction workers, opening the door to Asians in construction throughout New York City.

We talk about the long history of Chinese immigration to the United States and settlement in New York City. We also discuss the rise of the garment industry that became increasingly important to the Chinese after World War II, especially after 1965. As we walk along Doyers Street, we talk about local and national events and social movements that inspired or led directly to that summer of resistance.

At the southern end of Doyers Street, where it intersects with the Bowery, a blue and white mural depicts the life of Corky Lee, a Queens-born photographer who recorded daily life and political movements among Chinese immigrants like his parents. In 1975, Lee documented the mobilisation of thousands of Chinatown residents who marched on City Hall to protest the brutal beating of Peter Yew by NYC police and years of police harassment.

Lee also documented the garment workers’ strike in 1982. And he sought to correct the historical record. The mural revolves around a rendering of the meeting of east- and westbound trains of the Transcontinental Railroad in Promontory Point, Utah, in 1869.

One of the most enduring photographs of that moment depicts the owners and builders who gathered around the golden spike that joined the Union Pacific and Central Pacific railroads. That engineering feat (along with the annihilation of Native Americans) was crucial to the United States’ accumulation of wealth and power.

The photograph was missing members of one key group who were responsible for building the railroad: the many thousands of Chinese labourers who risked life and limb taking the dirtiest and most dangerous jobs to construct the railroad. Hundreds died. In one of his most enduring photographs, Lee assembled scores of descendants of those “coolie” labourers at Promontory Point to recreate the 1869 triumphal image. He called it “an act of photographic justice.”

The next building over is the Chinatown post office named for Mabel Ping-Hua Lee, the first Chinese woman to earn a Ph.D. in economics in the United States (from Columbia University). Lee came to New York from Guangzhou with her family at nine years old. In 1912, at sixteen, she mounted a horse to lead a Chinatown contingent of suffragists in a parade up Fifth Avenue to demand the vote for women.

Mabel Lee joined the Women’s Political Equality League, working with wealthy reformists and socialists, like garment workers’ organiser Rose Schneiderman, to achieve the passage of the Nineteenth Amendment in 1920, even though Lee herself would not get the right to vote until 1943. The Chinese Exclusion Act of 1882 barred Chinese immigrants and their descendants from obtaining US citizenship, until it was repealed during World War II.

Around the corner at 21 Pell Street stands the First Chinese Baptist Church that Lee founded in 1926 and led until she died in 1966, providing social services to the Chinese community just as it began to swell with new immigrants.

Across from the post office on Doyers, the tour guide to whom I was listening pointed out the old Chinese Opera House. After a theatrical performance in 1905, four members of one tong were shot to death by members of a rival tong. What he did not talk about was a drama of interethnic solidarity just a few years earlier.

When the Chinese Exclusion Act was permanently extended in 1902, Jewish liberal and socialist voices objected publicly. The following year, during Easter 1903, in Kishinev, Moldova, then a province of the Russian Empire, nearly 50 Jews were killed and thousands more were displaced in a pogrom that shook the entire Jewish world. Jewish communities of the Lower East Side mobilised. They called for relief for the victims and to help what would be the greatest wave of Jewish refugees to leave Russia. Among them we militant socialists and organizers for the International Ladies’ Garment Workers’ Union (ILGWU), such as Schneiderman, Clara Lemlich, and Fannia Cohn.

The Chinatown community, numbering only about 7,000 people, responded with compassion and solidarity. They filled the 500-seat opera house raising hundreds of dollars in a benefit during which actors forewent their wages. They raised more in a subsequent banquet at the fine Mon Lay Won restaurant at 24 Pell Street.

As we wend our way through Pell Street toward Mott, we talk about how the Chinese came to create a small enclave here at the western edge of the Five Points neighbourhood, the poorest section of New York at the time. In the 1830s and 1840s, recent Irish immigrants mixed with newly freed slaves and others “down on their luck.” Throughout most of the 19th and into the 20th centuries, it had the worst housing, the worst sanitation, and the most lax enforcement of laws meant to protect the most vulnerable.

It was also always a tourist destination. Wealthy New Yorkers and tourists knew they could take advantage of desperate men and women left with no alternatives to selling drugs and their bodies in the dilapidated flophouses, beer halls, and brothels that lined the crowded, fetid streets. With regular payoffs, police and Tammany Hall politicians turned a blind eye to all manner of vice.

This was the original destination for the term “slumming,” as to go to the slums for illicit entertainment. It is here that the Chinese were allowed and could afford to establish a foothold.

Today a number of buildings still stand that were erected before the 1901 New York State Tenement House Act, mandating indoor plumbing and at least one window in each room that could open to fresh air and light. Even the many buildings in the neighbourhood built between 1910 and 1920 that Chinese immigrants lived in saw neglect over time.

In the 1960s, ’70s, and ’80s, garment workers complained that there were too few affordable daycare centres. They were forced to bring their young children to work in the shops, amid the fiber dust, the loud and dangerous moving machinery, and the needles, scissors, and other hazards. Or they could leave the children at home alone. In these buildings, unattended children were known to fall down broken stairs, out of windows, and down elevator shafts — sometimes to their deaths.

On Mott Street, we pass by the Catholic Church of Transfiguration that hosted union-sponsored English classes for Chinese immigrants as early as the late 1960s and opened its doors for union planning meetings around the 1982 strike. At 26 Mott Street, at the top of Mosco Street, stands a fifth-generation-owned porcelain shop called Wing on Wo & Co that has been there since 1925.

Daniel Katz teaches history at the City University of New York School of Labor and Urban Studies. He is the author of All Together Different: Yiddish Socialists, Garment Workers, and the Labor Roots of Multiculturalism.

This article is republished from Jacobin. Read the original article here.