Assam state police chief Bhaskar Jyoti Mahanta said the Hublot watch, which carried the signature of the Argentinian soccer legend, was seized from the suspect's home in the district of Sivasagar. 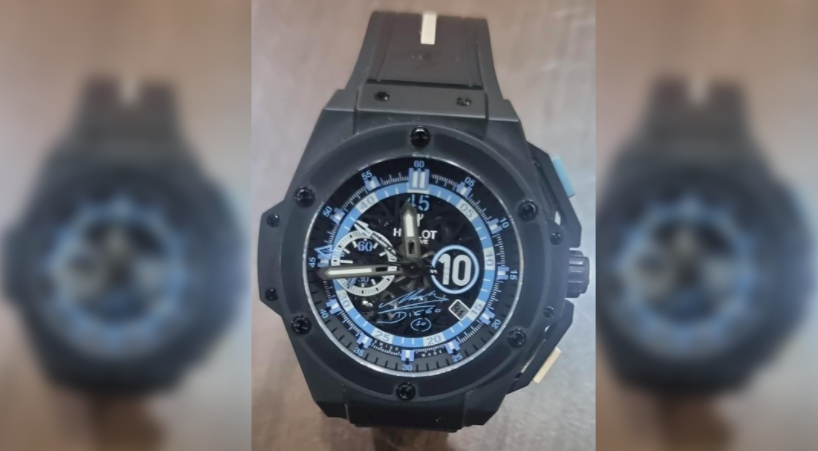 Police have recovered a stolen watch customised for Diego Maradona and arrested a suspect behind the alleged theft, officials said on Saturday.

Assam state police chief Bhaskar Jyoti Mahanta said the Hublot watch, which carried the signature of the Argentinian soccer legend, was seized from the suspect’s home in the district of Sivasagar, some 350 kilometres  east of Guwahati.

Hand of the law

Police said they detained Wazid H. and recovered the luxury Swiss-made watch after he fled to India following an alleged theft in Dubai.

The 37-year-old suspect had been working as a security guard at a Dubai-based firm where memorabilia relating to Maradona were kept, according to authorities.

Also read: Diego Maradona: The God of Football Who Fought for Social Justice

The single-edition timepiece, valued at $26,500, has a photo of the star, with arms aloft wearing the number 10 jersey that is now indelibly, engraved on its back.

A costly Hublot watch… Maradona… Dubai… Assam Police
Looks like random words, don’t they?
But today all these words came together nicely, stating a story of successful International Cooperation between #DubaiPolice and @assampolice . pic.twitter.com/oMRYgpX3HH

Former Napoli and Boca Juniors forward Maradona died of heart failure in November last year at the age of 60, sparking three days of national mourning in his homeland.

Maradona will be remembered as the man who single-handedly — quite literally when taking into account his “Hand of God” goal against England — captained Argentina to World Cup glory in Mexico in 1986.