Recent Protests in Jordan Shouldn't Come as a Surprise to Anyone

Fiscal austerity is wreaking havoc in the region and causing the current spate of economic unrest. The latest flare-up of anti-government protests in Jordan, in response to yet another proposed tax, should come as a surprise to no one.

From Egypt to Tunisia to Iran, the West Asian and North African region has been rife with anti-government protests in the recent past. This most recent series of “bread protests” (where the motivating cause is linked to the rise in the price of staples such as bread) have been analysed by some observers as isolated and unlinked in cause and consequence. This couldn’t be further from reality. The economic unrest in Egypt, Tunisia, Iran and Jordan are very clearly linked, and are representative of a troubling situation brewing all over the region. To understand how, we must go back almost a decade to the Arab Spring movement.

The 2010-12 Arab Spring movement was an unprecedented display of mass political protest in the West Asian and North African region (Iran’s own Green Movement protests ran parallel to the Arab Spring movement, but were no less massive in scope and intensity). The images from Sidi Bouzid, Tahrir Square and other centres of protest captured the imagination of not only citizens, but also the global community. Many spectators fostered hope that a stable, peaceful, democratic future would eventually arise from the passions of the people.

A closer look at the developments that occurred post-2011 show how these hopes were betrayed, and explain why economic unrest is once again rampant in the region. In their desire to usher in an era of freedom and democracy, a great deal of emphasis was laid at the time (by the press, academics and public officials) on instituting socio-political reforms. This took many forms in different countries. In Jordan, King Abdullah’s response included dismissing a succession of prime ministers, reworking the share of power between the crown and the parliament, and initially clamping down the rights of journalists (though later retracting this somewhat). In Iran, President Hassan Rouhani (mindful of the general mood during President Mahmoud Ahmadinejad’s rule) promised social and political reform. In Tunisia and Egypt, the most pressing concern was holding fair, democratic elections so as to move away from the earlier long-standing authoritarian rule of Presidents Ben Ali and Hosni Mubarak. In focusing on socio-political reforms, however, a key fact was ignored: most of the protests in the region were either sparked or fuelled by the economic struggles of the masses.

Jordan, Iran, Egypt and Tunisia all suffered from fragile economies, poor macroeconomic indicators and demonstrable economic inequality at the time of their respective protests. This despite all four countries having begun the arduous process several decades back of shifting (at least on some level) from a mixed to a more market-oriented economy, in line with recommendations from the International Monetary Fund. Jordan, for instance, experienced a 12% unemployment rate and a 14.4% poverty rate. Tunisia, despite being the fifth richest African country in GDP per capita terms, had a 15% unemployment rate. Egypt and Iran were similarly placed in terms of fragility. The final triggers that saw people taking to the streets were similarly economic in nature. In Jordan, this trigger was a regressively high tax introduced by parliament that disproportionately affected the purchasing power of the poorest strata. In Tunisia, it was the self-immolation of Tarek el-Tayeb Mohamed Bouazizi following the confiscation of his apple cart. Bouaziz’s story of police harassment due to his inability to pay fines resonated with the masses.

A mass movement with such strong economic roots would naturally require deft, nuanced and system-appropriate macroeconomic responses. The actions taken by the international community as well as political leaders was sadly the exact opposite of this. Overall, the post-movement macroeconomic decisions from 2011 to 2018 centred largely around two things: either simply continuing the trajectory of IMF-endorsed neoliberal reforms that existed pre-movement, or bringing in such reforms where they were lacking (a crucial and most vicious reform being the imposition of fiscal austerity). Egypt, Jordan and Tunisia’s post-movement macroeconomic decisions can trace their lineage to the Deauville Partnership with Arab Countries in Transition, a coalition of G8 countries, Turkey, Arab Gulf countries, the World Bank and the IMF that would extend massive foreign loans in exchange for economic reforms. Iran’s trajectory, while separate, was nevertheless similar; to capitalise on its increasing integration with the international economy, Iran was urged to adopt similar reforms. Chief amongst these reforms was a fiscal contractionary stance. In other words, fiscal austerity. 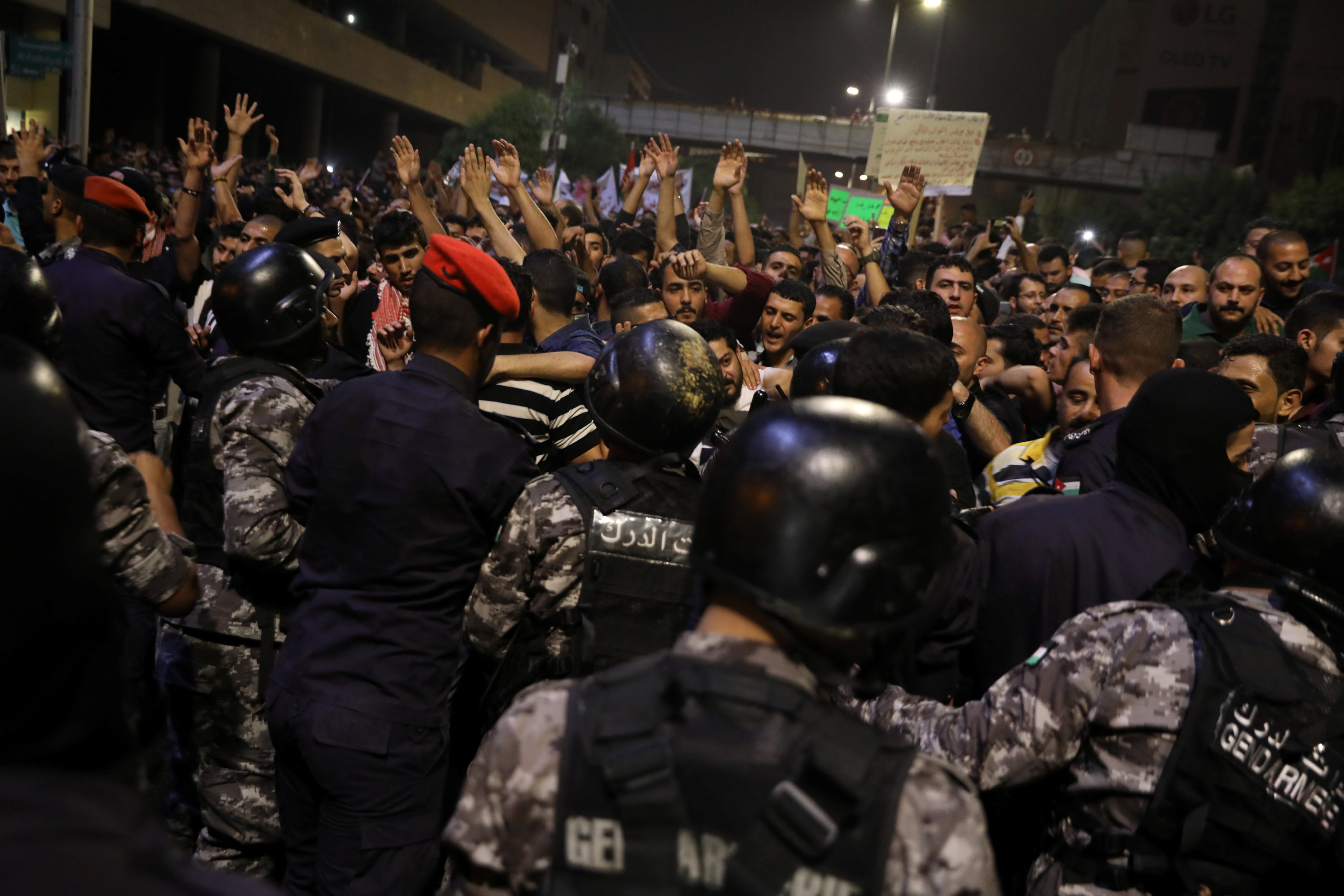 Demonstrators clash with police during a protest near the Prime Minister’s office in Amman, Jordan June 6, 2018. Credit: Reuters/ Ammar Awad

It is this fiscal austerity that is wreaking havoc in the region and causing the current spate of economic unrest. Jordan already faced bread protests earlier in the year following a 50-100% increase in taxes and a reduction in public spending aimed at reducing its 95% debt-to-GDP ratio. Iran’s most recent budget saw the reworking of its highly successful universal cash transfer scheme as well as an overall 11% increase in tax rates to generate about $55 billion, an amount higher than its projected oil revenues of $50 billion. This is again in line with IMF suggestions in its 2017 Article IV mission to Iran. In Egypt, the IMF’s recommendations proved disastrous to its middle class and poor population. In order to receive an IMF loan package of $12 billion in November 2016, Egypt was required to (among other things) float its pound for the first time. The consequent spike in inflation to 30% left large swathes of the country financially insecure. To address this, austerity measures including reducing state subsidies on fuel and electricity were enacted. The result has been a near-tripling of middle-class food bills. In Tunisia (considered the “success story” of the Arab Spring), a $2.9 billion IMF loan in 2015 came at the cost of cuts to public sector jobs as well as a reduction of subsidies (most crucially to bread). Presently, upwards of 30% of its youth and 15% of its total workforce are unemployed. In the words of Jihen Chandoul of the Tunisian Economic Observatory, “The IMF has choked Tunisia. No wonder the people are protesting.”

The standard response to these protests is that fiscal reforms of the type advocated by the IMF are unpleasant in the short term but necessary in the long term to ensure sustained and equitable growth. The simple reality, however, is that there is little evidence to support the idea that fiscal austerity is viable as a standardised response to flagging growth and economic instability. A recent special ‘Assessing Austerity’ edition of the Cambridge Journal of Economics discusses in great detail a number of fallacies that exist in the arguments of austerity advocates. Methodological flaws are highlighted in the Reinhart-Rogoff paper ‘Growth in a Time of Debt’ that links GDP growth and debt (a backbone of the pro-austerity argument). The notion that singular austerity success cases (such as that of Germany’s) are easily replicable in other nations has been demonstrated to be false. Historical instances are shown in 11 OECD countries, where fiscal contraction policies actually exacerbated demand problems and negatively affected economic recovery. The list goes on.

A major failure of the 2011 protests was the manner in which the initial demands by protesters for economic reforms were quietened in favour of broader demands for socio-political reform. In separating the two, the seeds were sown for a repeat of protests sooner rather than later. It is highly telling that, this time around, a number of Jordanian trade groups have refused to back down despite the resignation of Prime Minister Hani al-Mulki and promises by the parliament to address protesters’ concerns. Socio-political reforms and half-measures towards the economy will not be enough this time around; until the status quo approach to economic reforms is challenged, the international community can expect bread protests in West Asia and North Africa to continue.

Karthik Manickam is an economics researcher and a graduate of JNU and BITS-Pilani.