The Delusions Driving Israeli Thinking Have Been Exposed as Never Before

Sooner or later, severe oppression rebounds against the perpetrator. In Israel, when that happens, the answer is always and inevitably to use more violence. 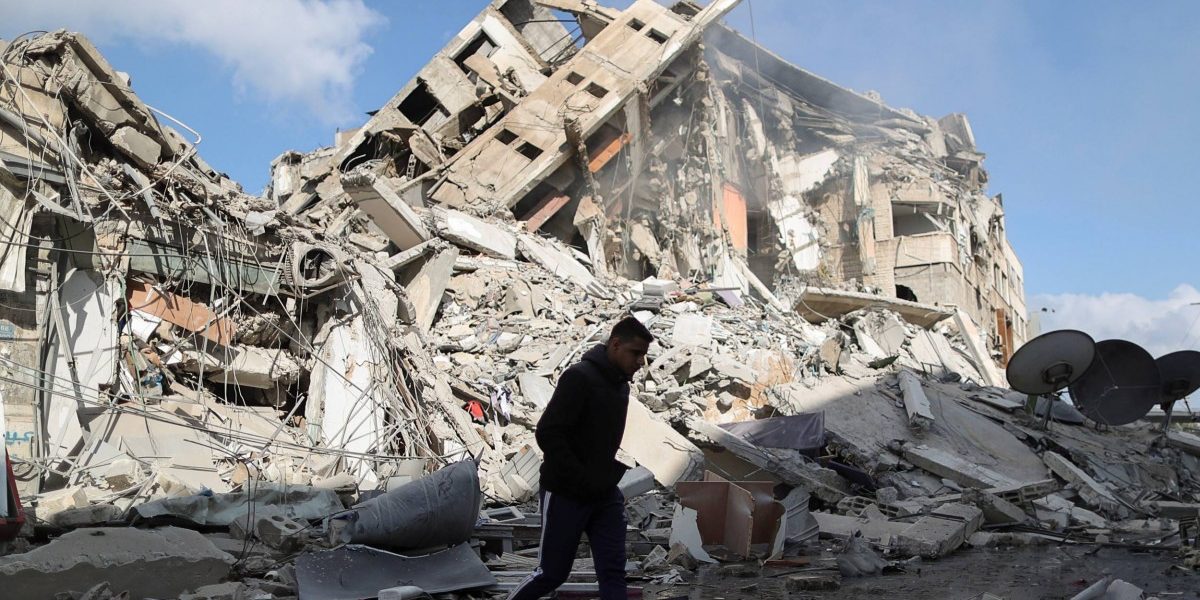 A Palestinian man walks past the remains of a tower building which was destroyed by Israeli air strikes in Gaza City, May 13, 2021. Photo: Reuters/Suhaib Salem

Something important happened in Israel in May 2021. Not just the fact that Hamas in Gaza surprised the army and the intelligence services, not to mention the government, by its ability to take command of a volatile situation, to hit deep into Israel with precision rocketry, and to impose its agenda on an overwhelmingly more powerful enemy. Not only the fact that the government and police have lost control of much of the country, especially mixed Arab-Jewish cities such as Lod, Ramleh, Jaffa,  Acre and east Jerusalem, where conditions close to civil war are now in evidence. Not only the acute failure of the Benjamin Netanyahu government to restore some semblance of normalcy, to say nothing of articulating a viable policy for the future.

All these are there for all to see. But the crucial point is that the deeper currents of life in Israel-Palestine, and above all the regnant delusions that have driven Israeli thinking for the past many decades, have been exposed as never before. What we will witness over the coming weeks is a desperate attempt to reestablish these self-destructive axioms as political norms, despite the disaster they have, unsurprisingly, brought about.

It is not difficult to trace the stages through which the current round of violence evolved. One particularly foolish move was the decision by the new police commissioner, Kobi Shabtai, to barricade the wide steps leading into the Damascus Gate of the Old City in Jerusalem. During Ramadan, these steps are a favourite place for families to celebrate the evening iftar meal. There was no apparent logic to closing them off apart from a wish to humiliate Muslim Palestinians at a particularly sensitive moment. Fiery protests erupted. Eventually, the police removed the barriers. By then other processes had been set in motion.

Also read: Palestine Is Witnessing the Daily Brutalities of an Occupying Power

In the Sheikh Jarrah neighbourhood of east Jerusalem, the Israeli courts have recently declared the impending eviction of several Palestinian families from their homes to be legal. I know those families well. For many years Israeli human rights activists have accompanied their struggle to save their homes and their lives, and we have had some success in at least delaying the evictions, often for years. Parts of Sheikh Jarrah were once – before the State of Israel came into being – owned by Jews; Palestinian refugees from the 1948 war were settled there by the Jordanian government in the 1950s, and they have been living there ever since. But Israeli settlers from the extreme nationalist right have been trying to reclaim these lands for the Jews, and the courts have sadly, and cruelly, gone along with them. I won’t go into the legal niceties here. Let me just note that easily a third of the properties in Israeli west Jerusalem belong to Palestinian families who lived there before 1948; under Israeli law, Palestinians have no hope of recovering their lost homes.

With the evictions in Sheikh Jarrah, which affect some 300 people, about to happen – unless the Supreme Court steps in to stop them, an unlikely move – the protests in the neighbourhood came back to life. Young Palestinians, including some from Arab villages in the north of Israel, joined in. Wild-eyed Jewish settler thugs, who now have their own party in the Knesset since Netanyahu brought them back from the limbo to which they had been consigned by law in 1988, descended upon Sheikh Jarrah in order to terrorise the Palestinian residents. Night after night, the neighbourhood turned into a battle ground, the police often siding with and protecting the settlers, as I saw with my own eyes. As so often, the attempt to violently suppress peaceful protest has boomeranged. Sheikh Jarrah is now a rallying cry for Palestinians everywhere in Israel and the West Bank, also for the Arab world beyond Palestine.

The height of madness was reached in the Haram al-Sharif during the final days of Ramadan, when tens of thousands of worshippers come to the Al-Aqsa mosque. Some of them threw stones at the police, who responded with extraordinary brutality. Hundreds of Palestinians were wounded, along with some 20 policemen. The Al-Aqsa mosque, mentioned in the Qur’an, is sacred to over a billion Muslims. It takes truly unusual degrees of imbecility to send policemen throwing stun grenades and tear gas at worshippers inside the mosque during Ramadan. Moreover, since the very beginning of the conflict in the early 20th century, Palestinian Muslims have seen the Zionist enterprise as aimed, first and foremost, at destroying the Haram so the Jews could rebuild their temple there. For many Palestinians, the Israeli police have now, not for the first time, substantiated this false notion. 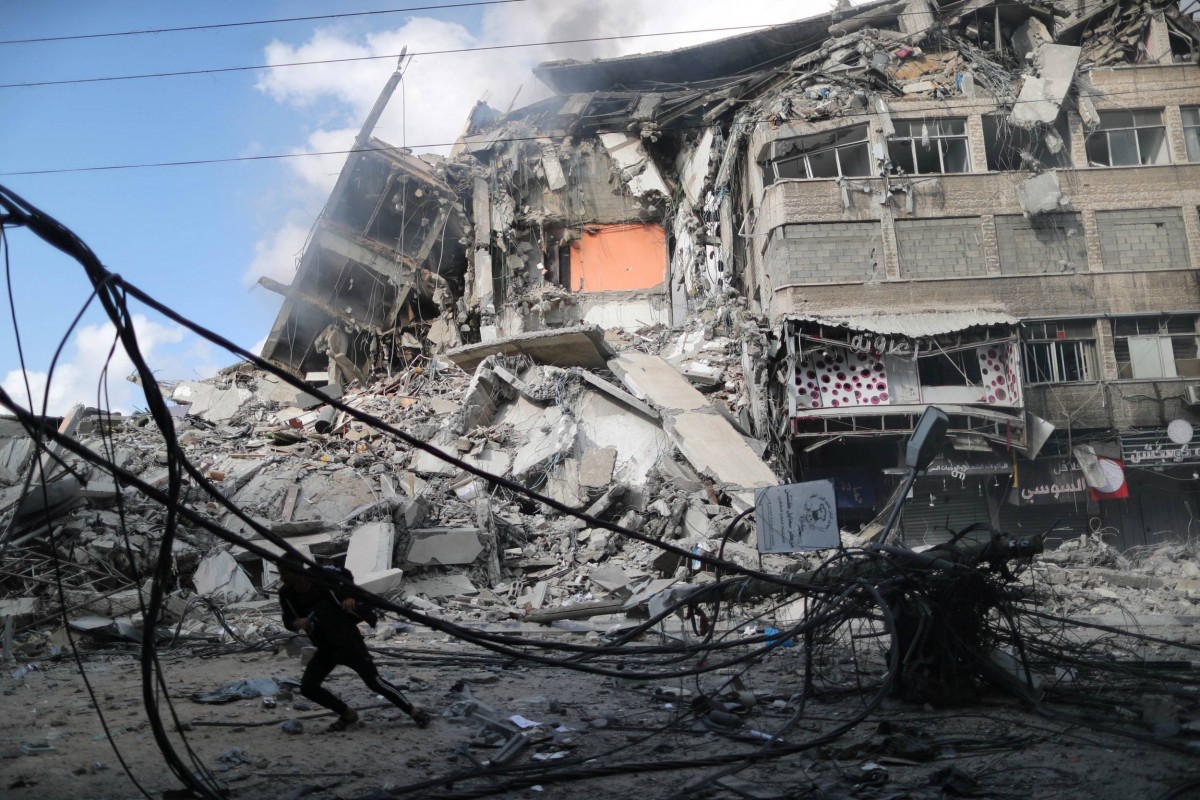 A Palestinian man runs for cover during an Israeli air strike near the ruins of a tower building which was destroyed in earlier strikes in Gaza City, May 13, 2021. Photo: Reuters/Suhaib Salem

There were other factors in play. Elections were supposed to take place in Palestine this spring; the Palestinian Authority cancelled them, fearing they would lose ground to Hamas. It’s a reasonable fear; the PA has failed miserably to deliver anything of lasting value to the Palestinian national movement. Hamas, furious at President Abu Mazen’s decision, eagerly took over the role of defending Jerusalem, the Haram, Sheikh Jarrah and the West Bank, the latter languishing for the last 74 years under a regime of state terror and institutionalised theft of Palestinian land for Israeli settlement.

And there is one more far from negligible element. It cannot be by chance that this crisis developed, to the point of war, just as the Israeli opposition parties seemed to be close to establishing a government in the wake of the last Israeli elections. Netanyahu, who has driven the country through four indecisive elections in the last two years for the sole purpose of evading the criminal charges pending against him in court, was likely to lose power. The new government-that-almost-was is now on hold, possibly ruled out. The reader can draw her own conclusions about Netanyahu’s role in running this politically useful catastrophe.

All of this story has been told by others. For most Israelis, the causal chain is either invisible or forgotten, as the war unfolds. And Hamas has its own lethal actions to account for. But the core of the matter lies in the axioms I mentioned in the opening paragraph. It isn’t possible to enslave forever a population of millions, to deny them all basic human rights, to steal their lands, to humiliate them in a thousand ways, to hurt them, even kill them, with impunity, to create a regime meant to ensure permanent supremacy of one population over another, and all this by the exercise of  massive military force. In fact, “forever” is an overstatement. A tiny state like Israel can apparently get away with such a policy for some decades, using, actually mis-using, the memory of the Holocaust as its moral capital. Sooner or later, severe oppression rebounds against the perpetrator. In Israel, when that happens, the answer is always and inevitably to use more violence. Most of the country, and especially its elected leadership, suffers from a chronic learning disability.

During these dark days and nights, one can hear a host of Israeli generals speaking, ad nauseam, about “deterrence,” the alleged goal of this war, a goal they think can be achieved by inflicting vast destruction on Hamas in Gaza. It is, I think, fair to say that this fantasy of deterrence has never worked. Only a nation haunted by a fundamental sense of impotence could cultivate such a delusion, even turning it into the cornerstone of its worldview and the guiding compass of its policies toward others, including the intimate Palestinian other who shares this land with the Jews.

In the midst of so much mindless destruction, one searches desperately for some tattered scraps of hope. I used to think I would live to see the change that must happen here – to see the elementary principle of equality for all, enshrined in Israel’s Declaration of Independence, begin to take root in Israeli minds; to see Israelis and Palestinians embrace the many ties that bind them. I’m no longer so sure I’ll get to see that day.