The strikes came after Israel arrested Bassam al-Saadi, a senior leader of the Palestinian Islamic Jihad group, during a raid in the occupied West Bank city of Jenin on August 1. 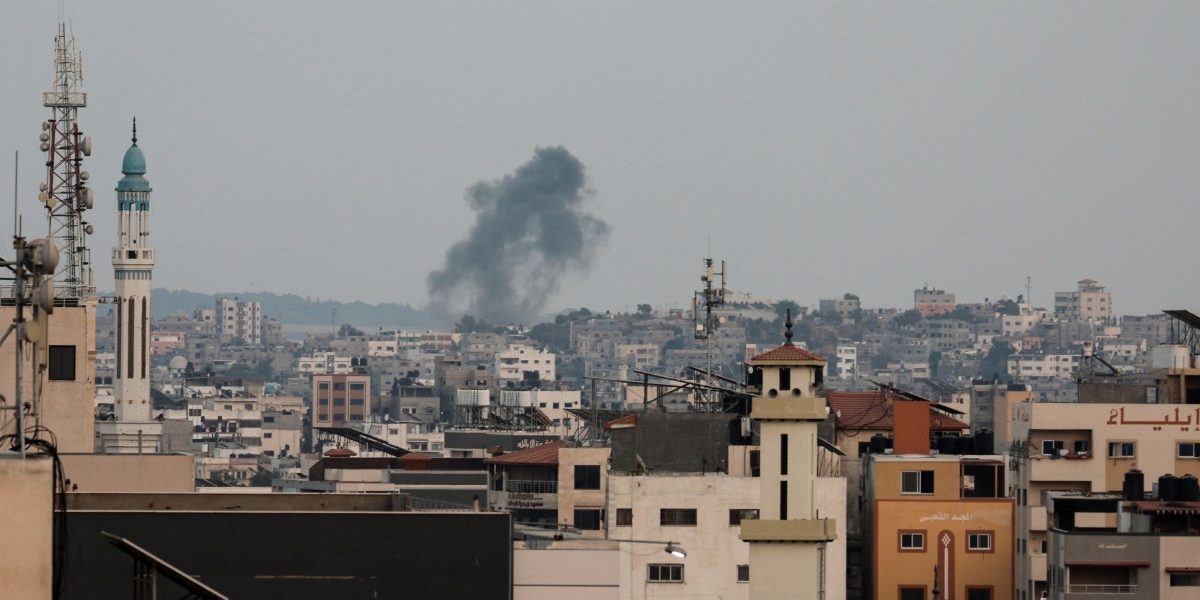 New Delhi: Israeli airstrikes hit targets across Gaza on Friday, killing a senior commander of the Palestinian Islamic Jihad movement and prompting vows of retaliation from the militant group, which said it could hit Tel Aviv in response.

Local health officials said at least nine people, including a five-year-old child, had been killed and 44 wounded in the strikes, which came after days of escalating tensions following the arrest of a Palestinian militant leader during the week.

An Israeli spokesperson said the military estimated it had killed around 15 “terrorists” but said it did not have a final casualty total.

“The IDF (Israel Defense Forces) is currently striking in the Gaza Strip. A special situation has been declared on the Israeli home front,” the military said in a statement.

Israel’s Army Radio reported that Israel was calling up military reservists for the region near Gaza, which has been ruled by the militant Hamas movement since 2007.

An Islamic Jihad official confirmed that Tayseer al-Jaabari, whom the Israeli military described as the main coordinator between Islamic Jihad and Hamas, had been killed in the strikes, which hit several targets around the densely populated strip.

Smoke rose from a building where al-Jaabari was apparently killed and glass and rubble were strewn across the street amid the sound of ambulances racing to other sites.

As mourners prepared to hold funerals for those killed in the attacks, hundreds of people, some holding Palestinian flags, marched through the streets of Gaza.

The strikes came after Israel arrested Bassam al-Saadi, a senior leader of the Islamic Jihad group, during a raid in the occupied West Bank city of Jenin earlier this week.

It subsequently closed off all Gaza crossings and some nearby roads over fears of retaliatory attacks from the group, which has a stronghold in Gaza, further restricting Palestinian movement.

“The goal of this operation is the elimination of a concrete threat against the citizens of Israel and the civilians living adjacent to the Gaza Strip,” Prime Minister Yair Lapid said in a statement.

“There are no red lines in this battle and Tel Aviv will fall under the rockets of resistance, as well as all Israeli cities,” he said.

Hamas’ armed wing issued a statement saying: “The blood of our people and our mujahideen will not go in vain.” 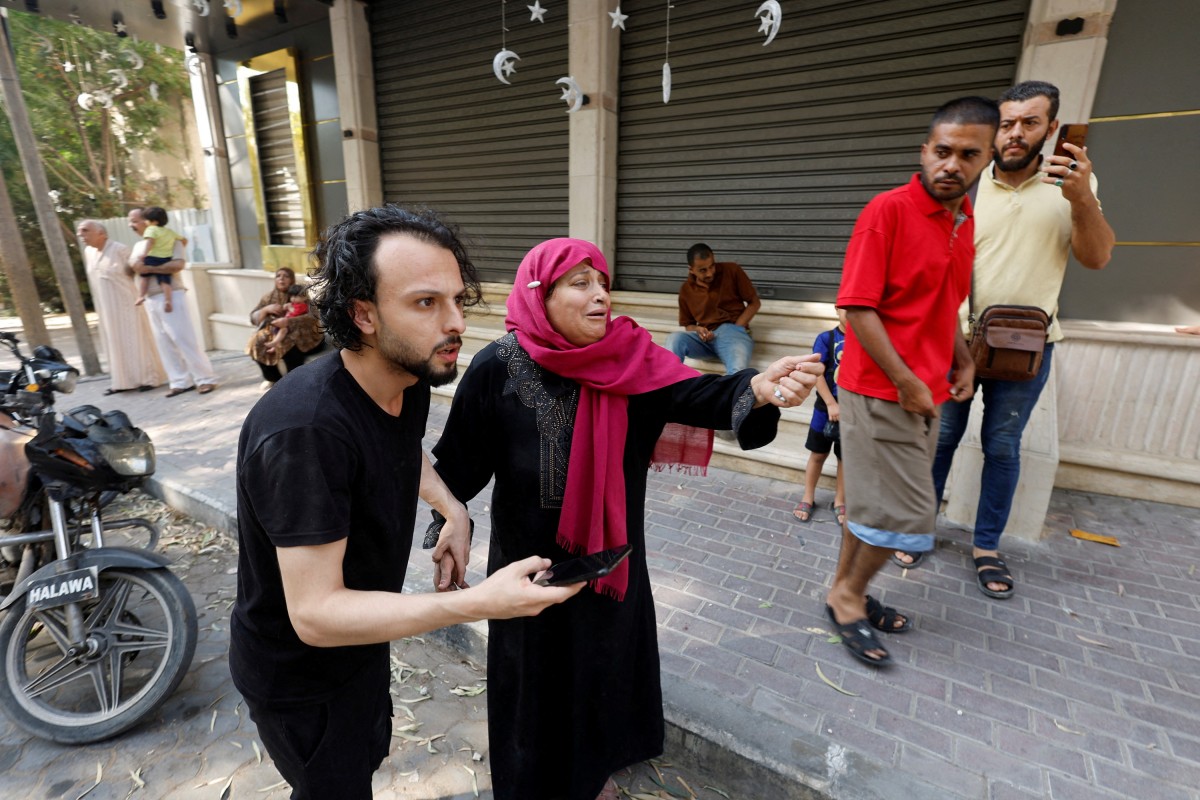 Palestinians react as they gather at the site of an explosion, following Israeli strikes in Gaza, in Gaza City August 5, 2022. REUTERS/Mohammed Salem.

Islamic Jihad, one of a cluster of Palestinian militant groups, was founded in Gaza in the 1980s and opposes political dialogue with Israel.

Considered close to Iran, it is separate from Hamas but generally cooperates closely with the movement.

The Israeli military spokesperson said authorities expected there would be rocket attacks against the centre of Israel but said Iron Dome anti-missile batteries were operational. He said special measures had been imposed in Israeli areas 80 kilometres around Gaza.

He said plans to allow fuel trucks into Gaza to keep the area’s sole power plant operational had been dropped at the last minute as intelligence picked up movements that indicated attacks on Israeli targets were imminent.

Friday’s attack came as Egyptian officials were seeking to mediate between Israel and Hamas, and an Islamic Jihad statement said the strikes appeared aimed at undermining mediation efforts.

Gaza, a narrow strip of land where some 2.3 million people live on a patch of 365 square kilometres (140 square miles), has been a constant point of conflict ever since Hamas took control.

The area has since been under blockade, with Israel and Egypt tightly restricting movement in and out.

“We have not yet been able to reconstruct what Israel had destroyed a year ago. People didn’t have the chance to breathe, and here Israel is attacking again without any reason,” said Mansour Mohammad-Ahmed, 43, a farmer from central Gaza.

Israel has fought five conflicts with Gaza since 2009, the most recent 11-day war in May 2021, when Hamas fired thousands of rockets into Israel, killing 13 people and Israel pounded the strip with airstrikes that killed at least 250 Palestinians.

Israel closed off all Gaza crossings and some nearby roads over fears of retaliatory attacks from the group, which has a stronghold in Gaza. The shutdown, which entered its third day on Thursday, has prevented Palestinian workers from crossing into Israel. It has affected 50 patients a day in need of healthcare outside of Gaza, according to the World Health Organisation.

“The enemy has begun a war against our people and against us and we will defend ourselves and our people,” the Islamic Jihad said in a statement.

Since Hamas started governing Gaza in 2007, Israel has maintained a land, air and sea blockade of the strip, citing security concerns.

The recent closures have cut off access for fuel trucks that supply Gaza‘s sole power plant, which will have to shut down within 48 hours if the crossings are not reopened, officials warned on Thursday.

Already facing cuts that leave them with just 10 hours of electricity a day, Gaza residents would face further blackouts if the plant stopped operating, leaving the enclave’s only external source of power a daily feed of 120 megawatts that comes from Israel.

“That would have a grave impact on the daily life of over two million people and vital services,” said Mohammad Thabit, of Gaza‘s power distribution company.

Residents on the Israeli side have also complained of restrictions on movement.

“We are in contact with Egyptian officials but so far there is no satisfactory result, therefore, the full alert status remains,” said Daoud Shehab, an Islamic Jihad spokesman.

Abdel-Latif Al-Qanoua, a spokesman for Hamas, the militant group that rules Gaza, condemned Israel’s closures and said his group had also been in talks with mediators.

“We will not accept the continued closure of crossings and the policy of collective punishment,” he said.