Palestinians, many of whom had spent 11 days huddled in fear of Israeli shelling, poured into Gaza's streets. 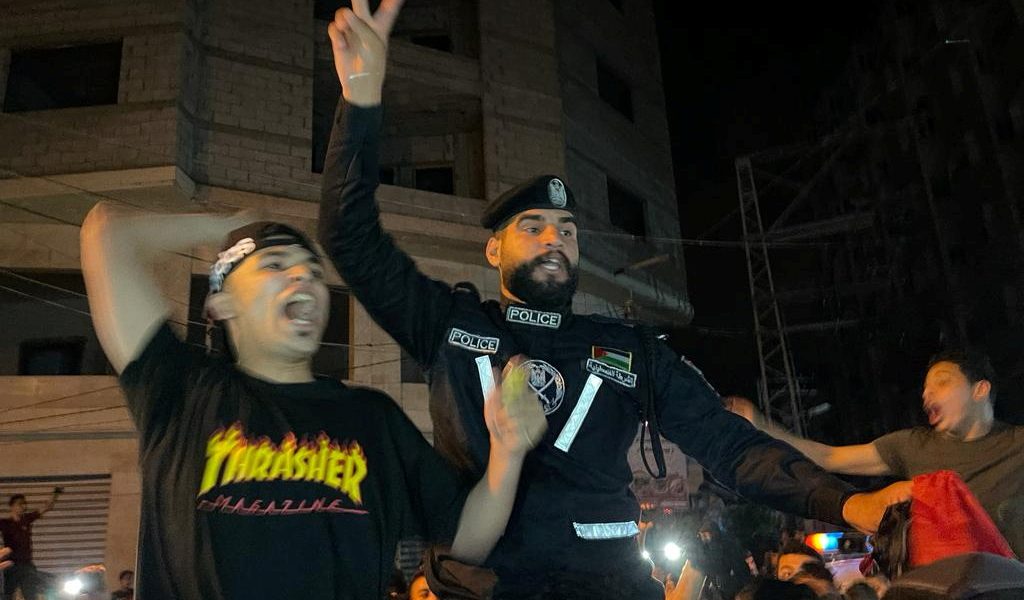 Palestinians celebrate in the streets following a ceasefire in the southern Gaza Strip, May 21, 2021. Photo: Reuters/Ibraheem Abu Mustafa

Gaza/Jerusalem: An Egyptian-mediated truce between Israel and Hamas began on Friday, but Hamas warned it still had its “hands on the trigger”. It demanded Israel end the violence in Jerusalem and address the damages in Gaza Strip after the worst fighting in years.

Palestinians, many of whom had spent 11 days huddled in fear of Israeli shelling, poured into Gaza’s streets. Mosque loud speakers feted “the victory of the resistance achieved over the Occupation (Israel).”

In the countdown to the 2 am (Thursday, 23:00 GMT) ceasefire, Palestinian rocket salvos continued and Israel carried out at least one air strike. Each side said it stood ready to retaliate for any truce violations by the other. Cairo said it would send two delegations to monitor the ceasefire.

The violence erupted on May 10, triggered by Palestinians’ anger at what they saw as Israeli curbs on their rights in Jerusalem. This included police confrontations with protesters at Al-Aqsa mosque during the fasting month of Ramadan.

The fighting meant many Palestinians in Gaza could not mark the Eid al-Fitr festival at Ramadan’s conclusion. Instead, postponed Eid al-Fitr meals were held on Friday throughout Gaza.

In Israel, radio stations that had carried around-the-clock news and commentary switched back to pop music and folk songs.

Gaza health officials said 232 Palestinians, including 65 children, were killed and more than were 1,900 wounded in aerial bombardments. Israel said it had killed at least 160 combatants.

Authorities put the death toll in Israel at 12, with hundreds of people treated for injuries in rocket attacks that caused panic and sent people rushing into shelters.

Hamas, the Islamist militant group that rules Gaza, cast the fighting as successful resistance of a militarily and economically stronger foe.

“It is true the battle ends today but (Israeli Prime Minister Benjamin) Netanyahu and the whole world should know that our hands are on the trigger and we will continue to grow the capabilities of this resistance,” said Ezzat El-Reshiq, a senior member of the Hamas political bureau.

He told Reuters, in Doha, that the movement’s demands also include protecting Al-Aqsa mosque in Jerusalem and ending the eviction of Palestinians from their homes in East Jerusalem, which Reshiq described as “a red line”.

“What comes after the battle of ‘Sword of Jerusalem’ is not like what came before because the Palestinian people backed the resistance and know that the resistance is what will liberate their land and protect their holy sites,” said Reshiq.

In Israel, relief was bittersweet.

“It’s good that the conflict will end, but unfortunately I don’t feel like we have much time before the next escalation,” Eiv Izyaev, a 30-year-old software engineer, said in Tel Aviv.

In a televised address on Thursday, Biden extended condolences to bereaved Israelis and Palestinians, saying that Washington would work with the United Nations “and other international stakeholders to provide rapid humanitarian assistance” for Gaza and its reconstruction.

Biden said that aid would be coordinated with the Palestinian Authority – run by Hamas‘ rival, President Mahmoud Abbas, and based in the Israeli-occupied West Bank – “in a manner that does not permit Hamas to simply restock its military arsenal”.

Hamas is deemed a terrorist group in the West and by Israel, which it refuses to recognise.

Analysts saw a key goal of Hamas‘s rocket campaign to be marginalising Abbas by presenting itself as the guardian of Palestinians in Jerusalem, whose eastern sector they seek for a future state. Making the link explicit, Hamas named the rocket operation “Sword of Jerusalem”.

Abbas, 85, remained a marginal figure during the 11-day conflict. He secured a first telephone call with Biden during the crisis – four months after Biden took office. But his western-backed Palestinian Authority exerts little influence over Gaza, and he made no public comment after the truce was announced.

Prime Minister Mohammad Shtayyeh, an Abbas appointee, said in comments published by Palestinian media, “We welcome the success of the international efforts led by Egypt to stop the Israeli aggression against our people in Gaza Strip.”

In perhaps a worrying sign for Abbas in his West Bank heartland, some Palestinians waved green Hamas flags in Ramallah, the seat of his government.

Hamas previously demanded that any halt to the Gaza fighting be accompanied by Israeli drawdowns in Jerusalem. An Israeli official told Reuters there was no such condition in the truce.

The State Department said that secretary of state Antony J. Blinken planned on travelling to the Middle East, where he would meet with Israeli, Palestinian, and regional leaders to discuss recovery efforts.

UN secretary general Antonio Guterres said, “Israeli and Palestinian leaders had a responsibility beyond the restoration of calm, to address the root causes of the conflict,” he told reporters with serious dialogue.

“Gaza is an integral part of the future Palestinian state and no effort should be spared to bring about real national reconciliation that ends the division,” he said.