'Sirens on Since 4 AM': Indians Describe Chaos, Confusion in Ukraine After Invasion

“People are hoarding food, petrol and dollars and leaving Kyiv for Lviv and even Odesa. We were also thinking of the same, but we have no idea of how dangerous it can get.” 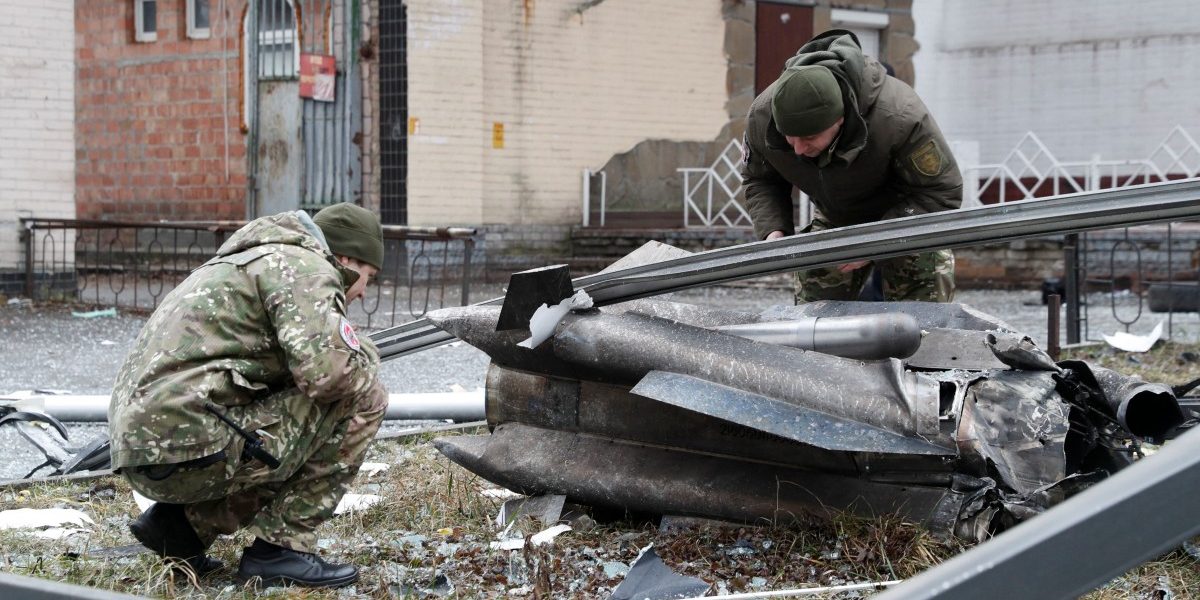 Police officers inspect the remains of a missile that fell in the street, after Russian President Vladimir Putin authorized a military operation in eastern Ukraine, in Kyiv, Ukraine February 24, 2022. Photo: Reuters/Valentyn Ogirenko

New Delhi: On Thursday (February 24), Yashika Sethi, a 27-year-old Indian teacher in Kyiv, woke up to the sound of multiple explosions. With charcoal smoke colouring the sky above her city, she saw people from her building rushing to the open lawn downstairs.

After the explosion, panic has gripped the Kyiv, the capital of and most populous city in Ukraine. The Ukrainian authorities have been making announcements asking people to stay inside.

Yashika, who arrived in Kyiv in 2020 from Delhi, never thought that Ukraine would become unsafe for her. She says, “We have packed the emergency goods but we are still thinking whether we should move or stay here, I don’t know what exactly is to be done.” 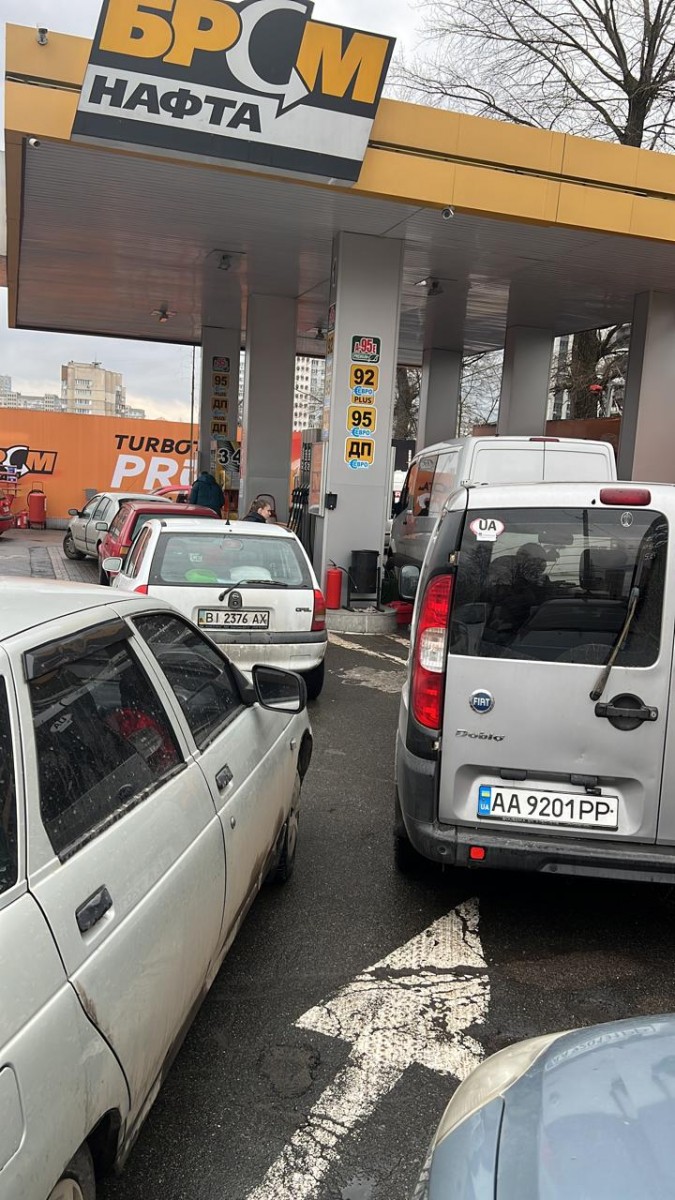 Yashika has been trying to fill gas in her car for three hours now. Photo: Yashika Sethi

Yashika had recently filled out a form shared by the Indian Embassy in Kyiv, but, she says, “I have received no communication about any evacuation drive that the form was for. Last I heard, even the evacuation flight was cancelled.”

Russia and Ukraine tensions have reached a boiling point for the second time now. When Russia had invaded Ukraine in 2014, rebels backed by Russian President Putin had grabbed large areas of eastern Ukraine and have regularly gotten involved into skirmishes with Ukraine’s army since then. At that time, Russia had annexed Crimea.

Dr Jasbir Singh Chauhan, a practicing doctor in Kyiv, which is about 380 km from the Russian border, was not worried about the attacks a week ago. Now, he explains, “People are in utter confusion as nothing is clear, news channels are not showing a clear picture (of what is happening).” Chauhan, 41, a Punjabi who has been in Ukraine since 2003, has no plans to leave the country. He was in Lugansk during the Crimean annexation, and said, “I have no plans to leave, if anything like 2014 happens here, we will firstly help students to evacuate.”

Pradeep Singh, a 23-year-old student at the Mariupol State Humanitarian University, is anxiously following the television news in his flat full of Indian students in Kyiv. Hailing from Karnal, Haryana, Singh’s family is extremely worried as flights have been cancelled to and from Ukraine. “Kyiv to Delhi flights cost usually $350, but these days, they cost $800, and even those now stand cancelled,” Singh told The Wire.

“People are hoarding food, petrol and dollars and leaving Kyiv for Lviv and even Odesa. We were also thinking of the same, but we have no idea of how dangerous it can get.”

Just as The Wire was speaking with a 21-year-old Indian student, air raid sirens went off in the background. “The sirens have been going on since 4 am,” said Sahil, who didn’t want to reveal his surname. A third-year medical student in Ternopil, a western Ukrainian city, he said that the situation in his area was still calm.

After his university declared online class on Wednesday, his group of around 20 Indian students bought a March 3 ticket for Delhi on Air Arabia via Sharjah. “We are not going anywhere right now, as our departure date is still some days away.” But with the airspace closed, he knows that it is unlikely that their flight will operate as scheduled.

Two of his friends had already brought tickets for an Air India flight for February 24. But once they reached Kyiv airport, they learnt that it had been cancelled. One of the messages from their friends on Thursday early morning had photos of Ternopil railway station, where the tracks were filled with wagons carrying Ukrainian military equipment.

Another Indian student in a western Ukrainian city described how he woke up to the news of the Russian military operation.

“I’m from Ivano-Frankivsk, which is located far away from the Ukrainian Russian border,” Saad Ansari, a 23-year-old third-year medical student, told The Wire via text. “I was sleeping normally with my phone on silent. But I woke up and got news of the (Russian) attack. Every person of my class was already awake and panicked. We are worried.”

He stated that his friend living near the local airport felt “a shock wave and boom” at around 7:30 am. “Later we saw smoke coming out. We don’t know what is happening but situation is getting worse.”

Noting that most locals have started to get cash from ATMs and stock groceries, Ansari added that he was also standing in line to get money out while speaking with The Wire. “I am in queue to collect cash. So that I can convert that into US dollars in case of any emergency.”

He had bought a flight ticket for India for February 28, but that may not be valid anymore.

“We have an option to go to Poland which is 200 km (away). But we’ll need diplomatic contacts for visa/entry. That’s the only possibility for now,” he told The Wire.

On social media, Indian students also complained about being stuck at the airport or in railway stations, while trying to leave. They said they were unable to get a response from the Indian embassy in Kyiv, and were unable to find taxis or buses to go back home.

“We are not saying take us back to India immediately. But at least give us a safe place to go,” one of them said in a video taken at Kyiv airport.

The Indian ambassador has issued a statement asking Indian students to look for safe lodgings with friends, family or their university. While the embassy is still functioning and able to help with emergencies, he said they were “inundated with calls”.

In another advisory, the embassy said, “For those students who are stranded without a place of stay in Kyiv, Mission is in touch with establishments to put them up.” The advisory also links the official list of bomb shelters, for those hearing air sirens and bomb warnings.