Though ICJ judges do not officially represent their countries, Dalveer Bhandari is one of two judges to have voted for the majority judgment by going against their countries' respective ballots at the UN resolution on Ukraine. 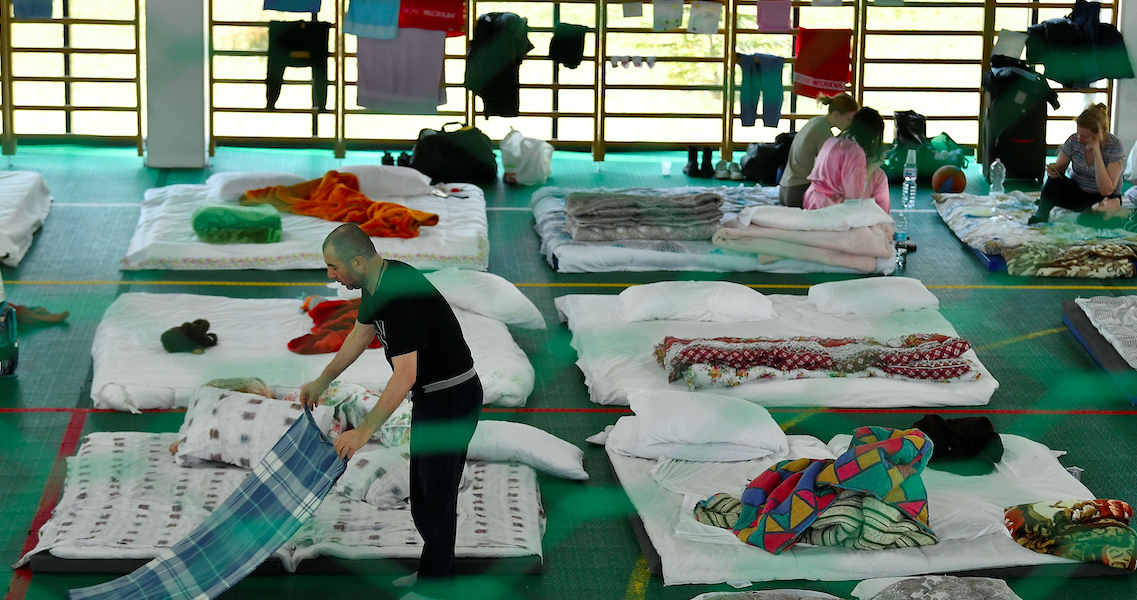 A man fixes his blanket at Dumbraveni sports arena which has been converted to a temporary shelter, after he fled Ukraine through a border crossing in Romania, following Russia's invasion of Ukraine, in Suceava, Romania March 15, 2022. Photo: Reuters/Clodagh Kilcoyne

New Delhi: The United Nations’ judicial body has called for Russia to immediately halt its military operations in Ukraine in a 13-2 judgement, with India’s Dalveer Bhandari joining the majority, while the Russian and Chinese judges voted against the order.

Although the rulings of the International Court of Justice (ICJ) are binding, it has no direct means of enforcing them, and in rare cases, in the past, countries have ignored them.

“The Russian Federation shall immediately suspend the military operations that it commenced on February 24, 2022 on the territory of Ukraine,” said the ICJ order on Wednesday.

They added that Russia must also ensure that other forces under its control or supported by Moscow should not continue the military operation.

“The Russian Federation shall ensure that any military or irregular armed units which may be  directed or supported by it, as well as any organizations and persons which may be subject to its control or direction, take no steps in furtherance of the military operations…”.

The second direction was added by the 15-member bench, based in the Netherlands, in line with Russian permanent representative to the United Nations informing in a letter that the two Ukrainian breakaway provinces, “Donetsk People’s Republic” and the “Lugansk People’s Republic” had turned to Russia for military support. 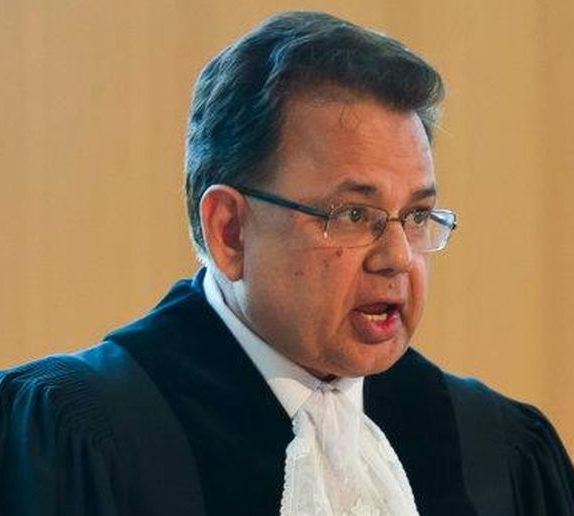 The two ICJ judges who voted against the orders to Russia to stop its military activities in Ukraine were Vice-President Kirill Gevorgian from Russia and China’s Xue Hanqin.

All 15 judges unanimously voted for the third and last provisional measures – “Both Parties shall refrain from any action which might aggravate or extend the dispute before the Court or make it more difficult to resolve”.

Though ICJ judges are nominated by their governments and do not formally represent their countries, all judges supporting the majority judgment have voted in line with their respective countries’ ballots at the March 2 UN General Assembly resolution on Ukraine, except for two countries. India and Uganda had abstained, while Morocco had been absent during the UNGA voting. China had also abstained.

Ukraine filed its case at the ICJ two days after Russia’s invasion began on February 24, saying that Moscow’s stated justification, that it was acting to prevent a genocide in eastern Ukraine, was unfounded. 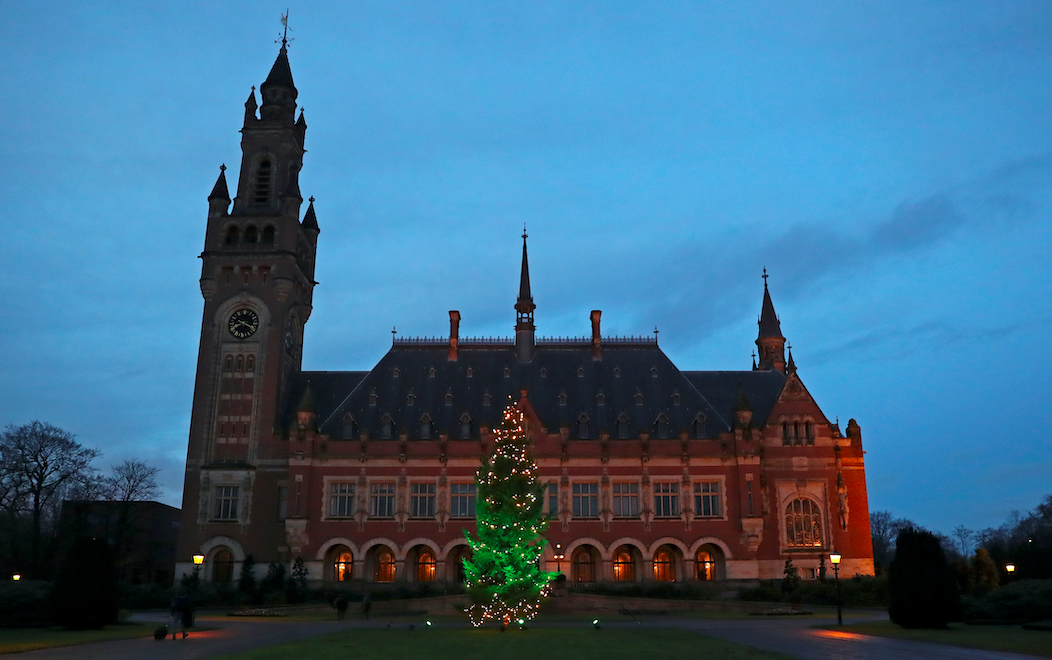 a) Adjudge and declare that, contrary to what the Russian Federation claims, no acts of genocide, as defined by Article III of the Genocide Convention, have been committed in the Luhansk and Donetsk oblasts of Ukraine.

(b) Adjudge and declare that the Russian Federation cannot lawfully take any action under the Genocide Convention in or against Ukraine aimed at preventing or punishing an alleged genocide, on the basis of its false claims of genocide in the Luhansk and Donetsk oblasts of Ukraine.

(c) Adjudge and declare that the Russian Federation’s recognition of the independence of the so-called ‘Donetsk People’s Republic’ and ‘Luhansk People’s Republic’ on February 22, 2022, is based on a false claim of genocide and therefore has no basis in the Genocide Convention.

(d) Adjudge and declare that the ‘special military operation’ declared and carried out by the Russian Federation on and after 24 February 2022 is based on a false claim of genocide and therefore has no basis in the Genocide Convention.

(e) Require that the Russian Federation provide assurances and guarantees of non-repetition that it will not take any unlawful measures in and against Ukraine, including the use of force, on the basis of its false claim of genocide.

(f) Order full reparation for all damage caused by the Russian Federation as a consequence of any actions taken on the basis of Russia’s false claim of genocide.”

In addition to disputing the grounds for the invasion, Kyiv also asked for emergency “provisional” measures against Russia to halt the violence before the case was heard in full. Those measures were granted on Wednesday.

Russia informed the ICJ in a letter dated March 5 that his government had decided not to participate in the oral proceedings. No Russian officials were present in the hearings.

Then after the hearings closed on March 7, Russia sent another letter which asserted that the ICJ lacked jurisdiction and requested the “the Court to refrain from indicating provisional measures and to remove the case from its list”.

During hearings earlier this month, Ukraine said there was no threat of genocide in eastern Ukraine, and that the UN’s 1948 Genocide Convention, which both countries have signed, does not allow an invasion to prevent one.

Ukrainian government forces have been battling Russia-backed separatists in the Donbass region of eastern Ukraine since 2014. Kyiv and its Western allies reject Moscow’s claims of any genocide being perpetrated against Russian speakers there.

Ukrainian President Volodymyr Zelenskiy on Wednesday welcomed the ruling by the ICJ on emergency measures as “a complete victory” in its case against Russia.

“The (ICJ) order is binding under international law. Russia must comply immediately. Ignoring the order will isolate Russia even further,” Zelenskiy said on Twitter.

Reading out Wednesday’s ruling, presiding judge Joan Donoghue said the court was “profoundly concerned about the use of force by the Russian Federation in Ukraine which raises very serious issues of international law”.