The Palestinian leadership were quick to condemn the agreement as a “betrayal”, with Palestine president Mahmoud Abbas recalling the ambassador to UAE. 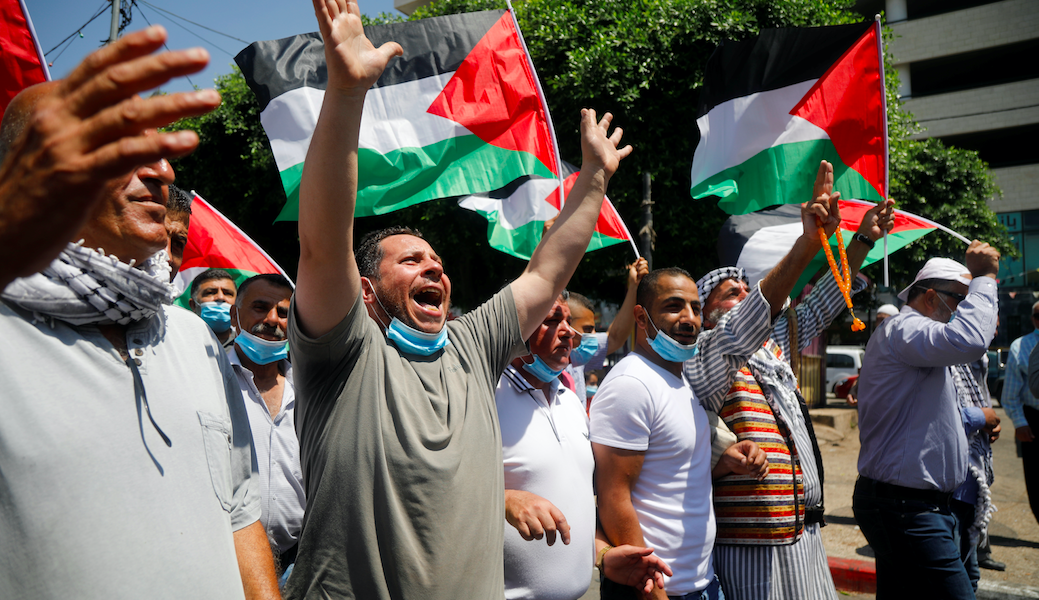 Palestinians take part in a protest against the United Arab Emirates' deal with Israel to normalise relations, in Nablus in the Israeli-occupied West Bank August 14, 2020. Photo: Reuters/Raneen Sawafta

New Delhi: A day after US President Donald Trump made the surprise announcement, India has welcomed the ‘full normalisation’ of ties between Israel and the United Arab Emirates, an agreement brokered by in exchange for Tel Aviv suspending its annexation of Palestinian territories.

On Thursday, the White House released a joint statement signed by the three countries, which stated that Gulf kingdom will work towards establishing diplomatic links with Israel. Due to this “diplomatic breakthrough”, Israel has agreed to “suspend” Prime Minister Benjamin Netanyahu’s plan to declare sovereignty over West Bank.

Joint Statement of the United States, the State of Israel, and the United Arab Emirates pic.twitter.com/oVyjLxf0jd

In the press briefing, Trump described the agreement as a “truly historic moment”, comparing it to the 1994 Israel-Jordan peace treaty. Once the pact is implemented, UAE will become the third Arab country to recognise Israel, after Egypt and Jordan.

Articulating India’s position, MEA spokesperson Anurag Srivastava said, “India has consistently supported peace, stability and development in West Asia, which is its extended neighbourhood. In that context, we welcome the full normalisation of ties between UAE and Israel. Both nations are key strategic partners of India”.

He added that India continued with its “traditional support for the Palestinian cause”. “We hope to see early resumption of direct negotiations to find an acceptable two-state solution,” said Srivastava.

The Palestinian leadership were quick to condemn the agreement as a “betrayal”, with Palestine president Mahmoud Abbas recalling the ambassador to UAE.

“The Palestinian leadership considers this step to blow up the Arab Peace Initiative and the decisions of the Arab and Islamic summits, and international legitimacy, as an aggression against the Palestinian people, and as neglecting Palestinian rights and sacred things, especially Jerusalem and the independent Palestinian state on the borders of June 4, 1967,” said the statement, which called on Arab League to denounce the pact.

India’s statement on the agreement is not surprising as all the three nations signing the statement have become close partners of the Modi government.

When contacted, there was no response from the Palestine embassy in New Delhi to India, on the agreement.

Deal not entirely a ‘surprise’

Retired Indian foreign service officer Navdeep Suri, who had been India’s ambassador to UAE till September 2019, told The Wire that the trends towards the normalisation of ties between Israel and UAE had been clearly discernible in the last couple of years. The two countries were “driven by their joint antipathy towards Iran,” Suri said.

In July 2015, Iran and a group of six nations led by the US reached a deal to limit Iran’s nuclear weapons programme in exchange for lifting of economic sanctions. Five months later, Israel was opening its first ever diplomatic mission in a Gulf nation, with a representative posted at the Abu Dhabi headquarters of International Renewable Energy Agency. At that time, Israel had claimed that this was neither a consulate nor a mission, but the presence of an Israeli diplomat in UAE gave out an unmistakable signal.

Suri also recalled the visit of the Israel sports minister Miri Regev in October 2018, ostensibly to attend a judo tournament. She visited the Grand Mosque in Abu Dhabi and wrote in the guest book in Hebrew. “The fact that Emirati media was covering her visit and publishing her photographs indicated that the rapprochement was in the offing,” he said.

There were more signs of active Arab-Israeli backchannel links, with Emirati officials publicly laying ground of an imminent change.

“Many, many years ago, when there was an Arab decision not to have contact with Israel, that was a very, very wrong decision, looking back,” UAE minister of state for foreign affairs Anwar Gargash told Abu Dhabi based daily The National in March 2019.

He forecast, according to the newspaper report, a “strategic shift” in relations between Israel and Arab nations.

Despite the clear willingness of Emirati leadership, it took more than a year for UAE to formalise its already extensive links with Israel.

Role of US election

The timing, believes Suri, was clearly due to the forthcoming presidential election in November. “Both Israel and the Emiratis want to help Trump politically. They want him back in the White House,” he said

UAE’s aversion of the previous Barack Obama administration had been publicly articulated after Trump’s surprising win in 2016. In remarks published in the official news agency in November 2016, Gargash described the Obama administration’s tenure as “eight years of weakened American engagement in the region, which many feel has created a disconcerting vacuum”.

Even if Trump loses the elections, UAE is not likely to face any major diplomatic repercussions. The Democratic presidential candidate, Joe Biden, who had been vice-president in the Obama administration, welcomed the agreement as a “historic step to bridge the deep divides of the Middle East”.

Meanwhile, Trump with an eye at branding the agreement as a diplomatic victory in the election campaign, stated that the pact will be called “Abraham accord” as Abraham was “father of all three great faiths”. U.S. President Donald Trump receives applause after announcing that Israel and the United Arab Emirates have reached a peace deal that will lead to full normalization of diplomatic relations between the two Middle Eastern nations in an agreement that Trump helped broker, at White House in Washington, U.S., August 13, 2020. Photo: Reuters/Kevin Lamarque

In West Asia, all the Arab countries, except for Saudi Arabia, swiftly welcomed the agreement. Oman, which hosted Netanyahu on an official visit in 2018, backed UAE’s initiative to normalise ties with Israel, with Egyptian President Abdel Fattah el-Sisi also tweeting his appreciation.

On the other side of the aisle, Iran described the deal as an act of “strategic stupidity”.

Joining Tehran, Turkey stated that “history and the conscience of the region’s peoples will not forget and never forgive this hypocritical behaviour of the UAE, betraying the Palestinian cause for the sake of its narrow interests”. Turkish president Tayyip Erdogan said that he was considering snapping ties with UAE.

However, Saudi Arabia, which had led the Arab world against Iran, remained conspicuously silent, largely reflecting the domestic criticism of the deal among its citizens. According to Reuters, the Arabic hashtag “Gulfis_Against_Normalisation” was trending in third place on twitter in Saudi Arabia

Among the permanent members of the United Nations Security Council, UK, France and China also cheered the pact. Russia, which has balancing its ties between Israel and Iran, is the only P-5 to not issue a statement, even 24 hours after President Trump announced the agreement in Washington.