In Al-Hamme, Palestinian Shepherds Are Being Driven Away

Blocked from their traditional grazing grounds, the shepherds will eventually starve or – as the government hopes – pick up and leave.

The Israeli settlers from the outpost called Shirat Ha-Asavim, “Song of the Grass,” that sits just above al-Hamme, can take their sheep and goats deep into the firing zone whenever they want. Palestinian shepherds who try to graze there are regularly driven off by these settlers, or by police, or soldiers, or all of the above. Credit: Reuters

Once there was just the firing zone, largely fictive. It spreads over thousands of acres in the northern Jordan Valley, and it’s been in place, on paper and plastic-wrapped military maps, for maybe 40 years. This is not the only one in the Valley; a huge percentage of the land here has been declared either a military zone or a nature reserve, or both. But until recently, Palestinians were still grazing their herds in the firing zone just west of al-Hamme. On the two or three days in the year when the army was about to carry out training exercises there, the soldiers would let the Palestinian residents know a few days in advance, and for those days the shepherds would keep away.

Now it’s changed, since the appearance in the Valley of the new crop of Israeli outposts. We’ve watched them grow from scratch. Suddenly the firing zone has become a weapon. The Israeli settlers from the outpost called Shirat Ha-Asavim, “Song of the Grass,” that sits just above al-Hamme, can take their sheep and goats deep into the firing zone whenever they want.* Palestinian shepherds who try to graze there are regularly driven off by these settlers, or by police, or soldiers, or all of the above. In theory, they are now supposed to coordinate grazing times in the zone; in practice, it is next to impossible to do that, as our experience today shows. In short: The master race of the Jews, that is, members of the tribe in good standing, nationalist and religious Jews, not leftists, have free access, and inferior Palestinians have none. Blocked from their traditional grazing grounds, the shepherds will eventually starve or – as the government hopes – pick up and leave. 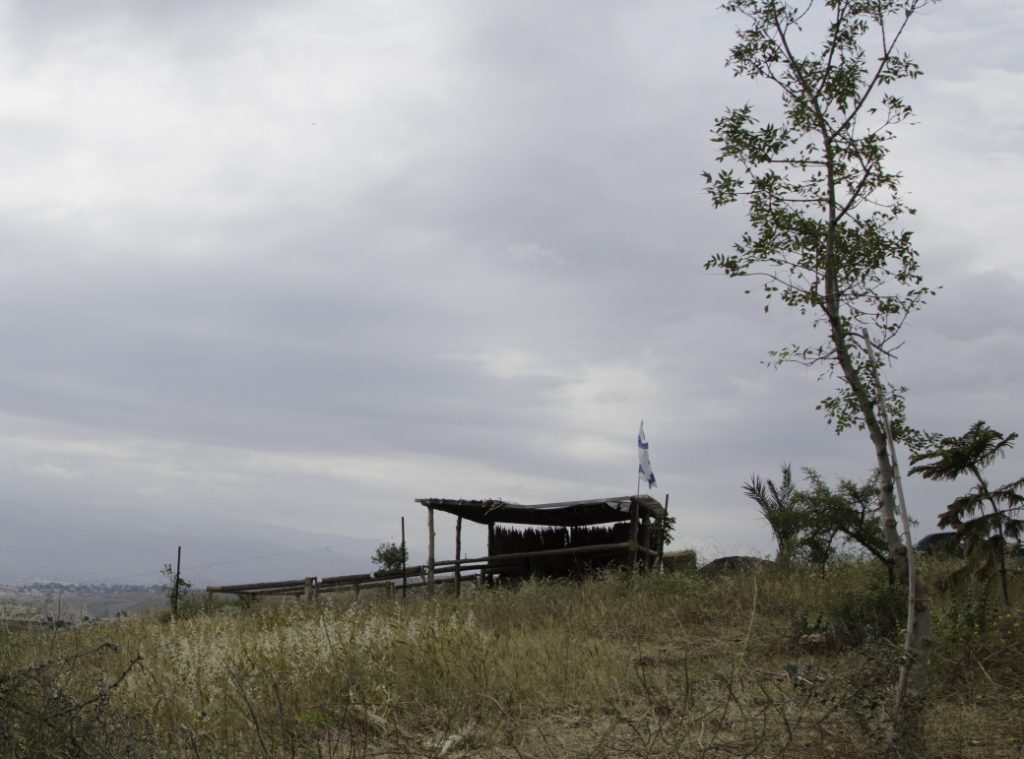 This government of the settlers, by the settlers, and for the settlers has a tripartite plan. First, colonising the territory and stealing the land. Second, slow ethnic cleansing by whatever means are at hand: denial of water, demolitions, arrests, threats, terror, physical violence. Third, annexation. There will probably be elections in Israel within less than a year; if the extreme right wins, as is likely, they will annex Area C – over 60% of the West Bank, where all the settlements are, including all of the Jordan Valley. The government lawyers have long been preparing the paper work for this move. What will happen to the Palestinians who live in Area C? Some will be driven out. Whole communities will vanish. The rest will be reduced to an existence even more abject than what they have now. Annexation means apartheid in the full light of day and the deep darkness of night.

Actually, the final stage is already in progress. Al-Khan al-Ahmar, the Bedouin village on the eastern outskirts of Jerusalem, is still waiting for destruction and expulsion. On Sunday morning, September 23, the day before Sukkot, the army sent officers there to read out a printed notice. The people of al-Khan al-Ahmar are ordered to demolish their own homes with their own hands. The army kindly offered to provide any help if they wanted it. If they fail to do this by October 1, according to the notice, the homes and school will be forcibly demolished. If this sounds to your ears like gratuitous cruelty mixed with supercilious insult, coming on top of the cruelty of the demolition plan itself, then we couldn’t agree more. We start the day at al-Hamme. Tea at sunrise. Abu Rasmi is already out with his herd on the mountain. To the south, another herd is visible on the distant horizon. Settlers, probably. Let’s go see. We park near the main road and start walking uphill. It is steep, rocky, a bit slippery, and above all long and hot, even early in the morning. We pass the junkyard that is Song of the Grass. More steep incline. After some time we reach a vantage point where both herds are visible, still far away. North-northeast, the cows of al-Hamme and their shepherd, mounted on a donkey. They don’t need us today, as far as we can see. The cows are strolling, somnolent, heavy with leaves and thorns, down toward their pen. South-southwest: settlers. Another young settler, whom we know well, strides past us and joins the herd. We figure they’ll probably call the soldiers. Maybe it’s a good idea, since we have plenty to tell them. 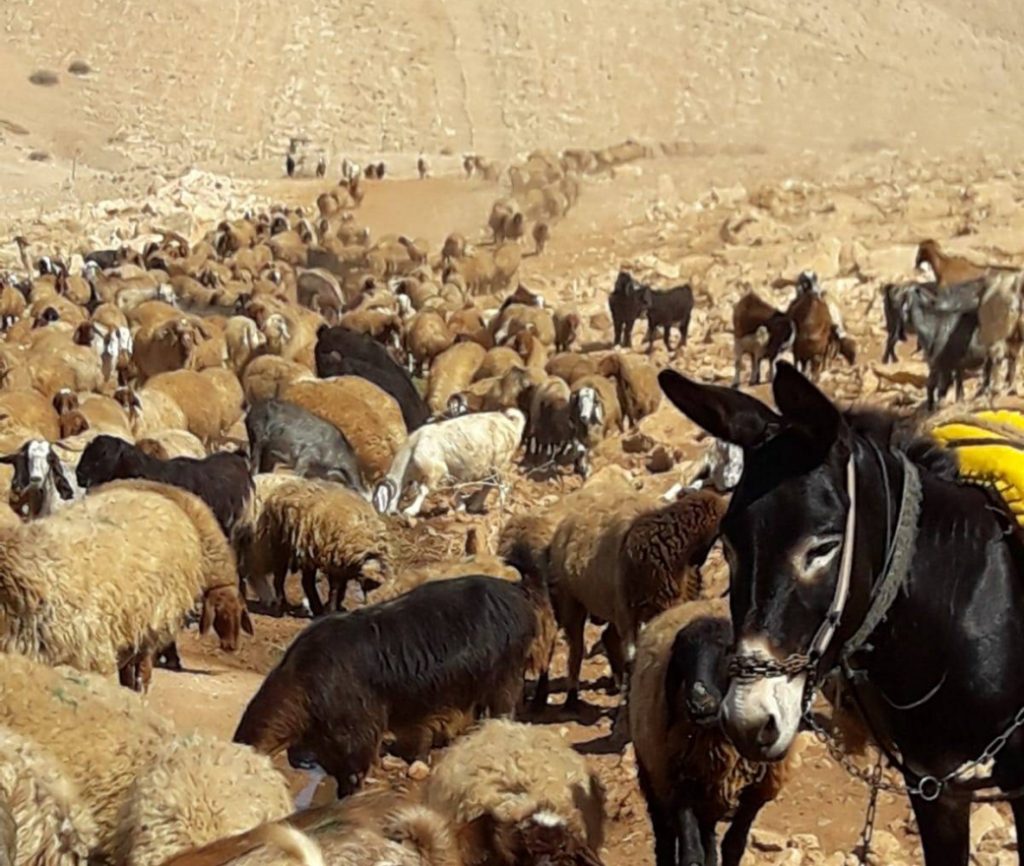 Meanwhile, we’ve been trying to reach the Matak, the officer of the Civil Administration in charge of serious matters like coordinating entrance to the firing zone. He doesn’t answer. We send him messages on WhatsApp, SMS, voice messaging. No sign of life. We try all the numbers we have. After an hour or so someone does pick up the phone. He says to call the lower-ranking officer of infrastructure, who also handles coordination. He, too, doesn’t answer. We ask someone in the office of the Matak if the settlers have permission to graze in the firing zone. We give him the coordinates of the settlers’ herd and offer to send pictures. The Matak’s office doesn’t know and doesn’t care. 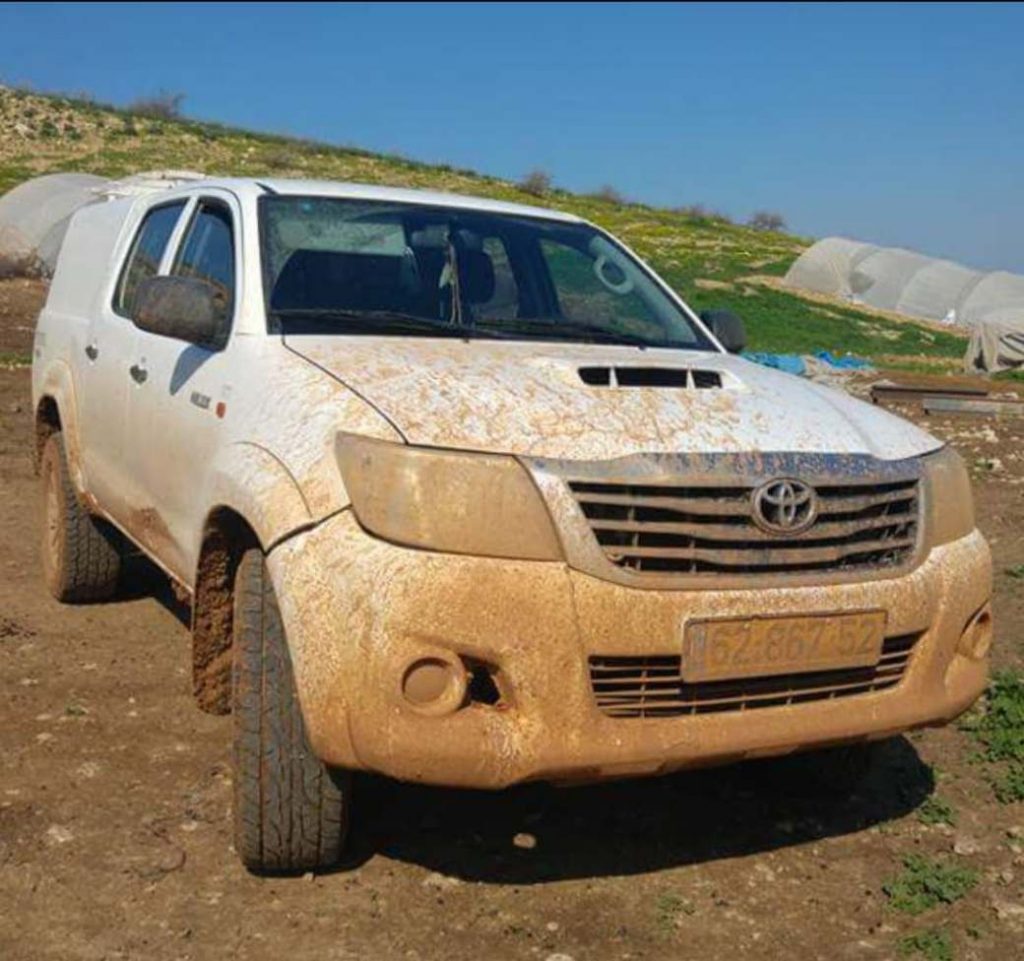 It’s not an idle question. On Tuesday, Guy, Arik and one of the Palestinians were arrested here on precisely this charge – entering the firing zone without permission. The settlers, needless to say, were also there, and the soldiers didn’t doubt for a minute their right to be there. For good measure, the army impounded Guy’s car, which, though an inanimate being, more or less, had also violated the new rule and therefore had to be punished. It’s still in some military parking lot. We’ll get it back and, I suppose, pay some fine. But Guy was so incensed by the blatant injustice and the soldiers’ casual, axiomatic solidarity with the settlers that he suddenly developed severe chest pains. He had a heart attack and angioplasty some three years back when he was arrested, right next to me, in the south Hebron hills, on a hot day very much like today. This time he refused to let the army evacuate him. Arik took him to a Palestinian clinic, where the pain subsided. Take it from me, climbing those high hills in the heat is nothing compared to the rage you feel in the face of impassive evil. 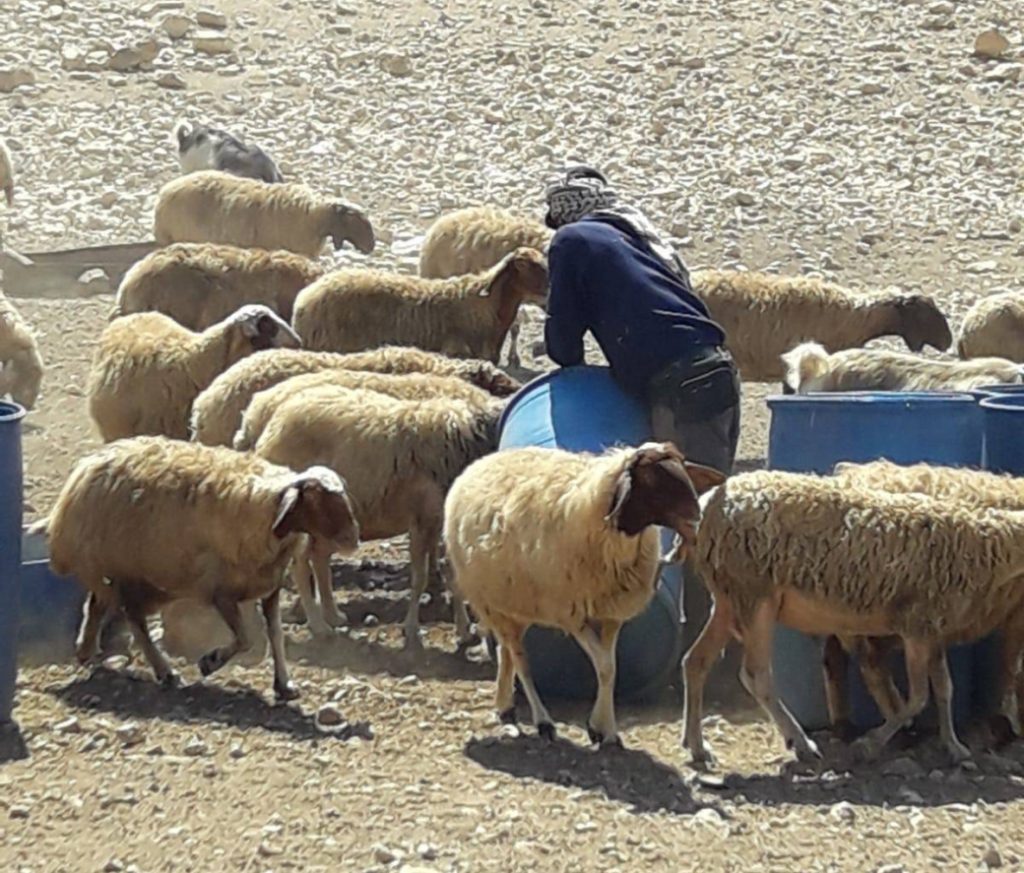 Guy’s all right today, but he scared us. We have an appointment with Burhan, a few kilometers down the road. He survives, alone with his father and brothers, in a rocky wadi just underneath the military camp at Ein Zuqa and the far more ominous settlers’ outpost next to the camp. Despite impossible odds, Burhan is a going concern. His herd is fruitful and multiplying. He makes the best white cheese in the world. He brings in water in tankers except for the weeks when the pipeline on the hill overflows. There’s another overflowing pipeline across the main road. We meet Tahsin and Hamudi there, on their way home to Burhan. The sheep and the donkeys, parched by the sun, gulp the bounty of water with the joy of sheep and donkeys. I know just how they feel. Earlier in the morning, the soldiers turned up to threaten and harass these shepherds with the joy that soldiers feel. When it’s not the soldiers, it’s the security officer of the Hemdat outpost. Sometimes he, or the soldiers, chase the shepherds and sheep over the hills. Burhan, terminally vulnerable but indomitable, now has activists who accompany his herd five times every week. 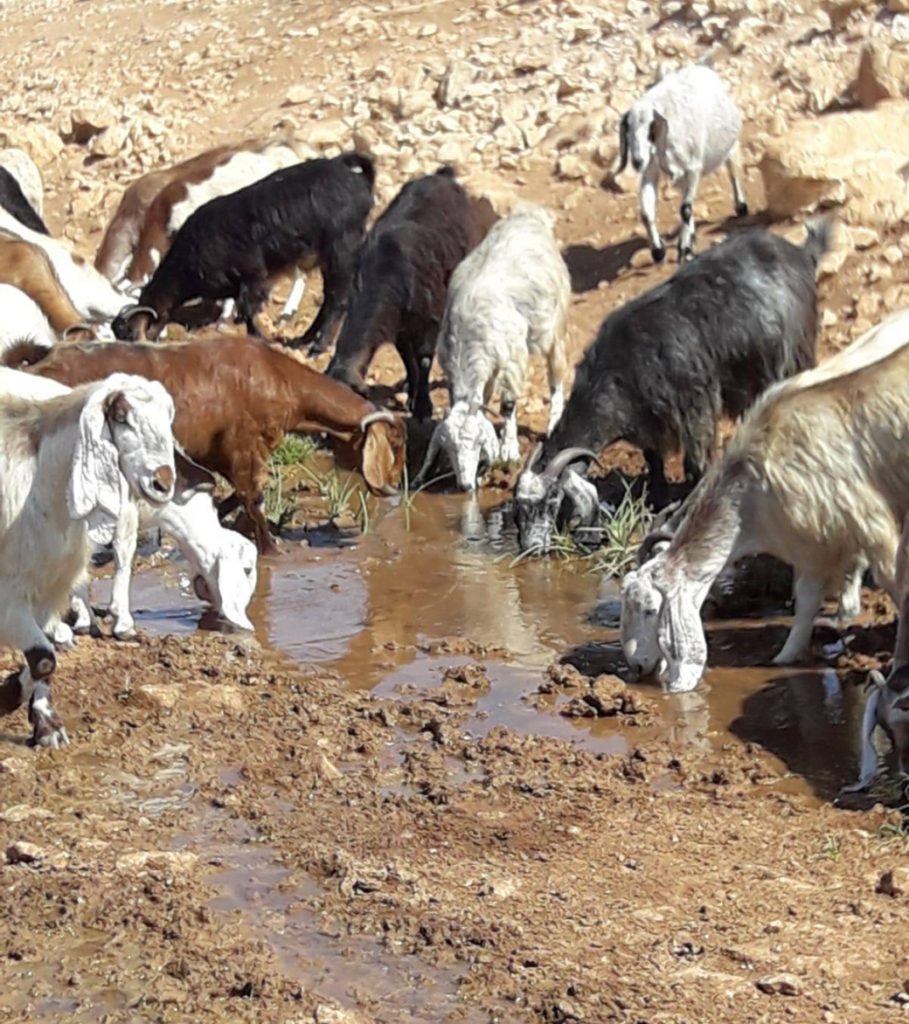 So it was a good day as our days go. No one attacked us, no arrests, the cows ate their fill, as did the sheep and the donkeys, we have fresh pictures and documentation, and there were the good moments at al-Hamme and with Burhan. But waiting for my ride before dawn, I was thinking. Isn’t it ridiculous, this thing that we do? A fearsome machine, remorseless, inhuman, on autopilot, is poised to drive these people out. It has wheels within wheels; often, usually, the smaller wheels aren’t even aware of the machine that drives them. Like the smaller wheels, the bigger wheels follow orders. Anyone can stand back and see it for what it is. And we, a ragamuffin bunch of some twenty-five or thirty volunteers who come down a few at a time when we can to snap, here and there, at the edges and sometimes at the rusty underbelly of the machine – do we stand a chance of stopping it? Of even of slowing it down a little?

Then I thought, yes, we stand a chance, and there is a way. I know the way. Then it was time to go.

*Shirat Ha-Asavim is a famous song by Naomi Shemer, with words by Reb Nahman of Bratslav. We believe he would have been horrified to see what these settlers have made of his thought and feeling. His love of the land of Israel had nothing to do with armies, flags, postage stamps, expulsions, and coercive and exclusive possession. Listen to it, with English and German subtitles, here.

This article was originally published on Touching Photographs. Read the original article.