Jewher Ilham speaks about her father, imprisoned Uighur academic Ilham Tohti, and the possible consequences of the third big leak from Xinjiang. 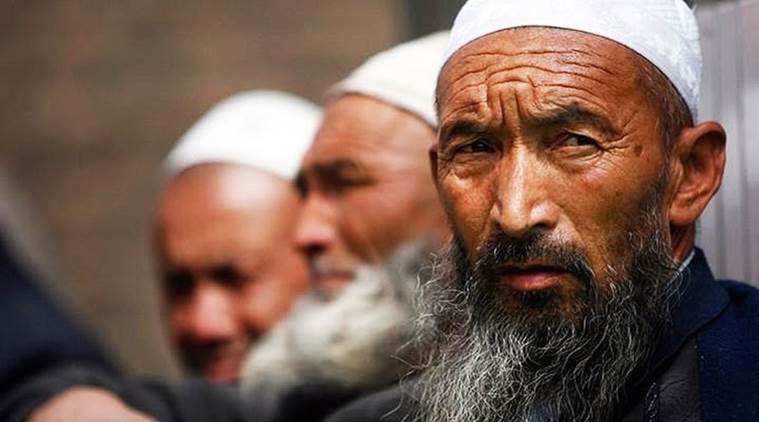 An official list of detainees, leaked to DW and other media, proves how China is tracking every face, every family and every movement of Muslim minority Uighurs in Xinjiang. People have been arrested for innocuous reasons that include growing beards, wearing veils, calling family members abroad, applying for a passport and having “too many” children.

DW’s Esther Felden asked Jewher Ilham about possible consequences of the third big leak from Xinjiang. She is the daughter of imprisoned Uighur academic Ilham Tohti, who was awarded the European Parliament’s Sakharov prize in 2019. Ilham Tohti is an economist who until 2014 lectured at Beijing’s Minzu University of China. He has been imprisoned since his 2014 life sentence on charges related to “separatism.”

Deutsche Welle: How did you feel when you learned about the Karakax List, which proves that China is imprisoning Uighurs based on their faith and culture?

Jewher Ilham: A lot of the information, I was not surprised. I had the chills when I first heard of the re-education camps, and this time, reading the leak, made the chills come back even stronger. Even though I have heard most of the information from camp survivors and was aware of how bad the situation is. But it is shocking to actually see proof for how someone can be targeted just because someone’s family member is overseas. It is very unacceptable and tragic.

Do you think there are still missing pieces to the puzzle or do we have an overall picture by now?

I think there is a lot of information still waiting to be found. This is not only happening in one county or one city, it is happening to the entire province. There are hundreds of camps throughout the Uighur region, and over one million people have been sent to camps. I am very sure that there are more things we can learn about.

In your opinion, what impact will the leaked document have? How much pressure can it potentially put on the Chinese government?

I do request an immediate response from the Chinese government. And I do hope that they stop claiming that this is a fake. Apparently, there are signatures and everything. It is a leak from inside China, so we can confirm the legitimacy of the document. And I do hope they can give an explanation. The first page of the Karakax List of detainees from Xinjiang

You said you expect an immediate response by the Chinese. What do you expect from the international community, Germany in particular?

Unfortunately, I think so many people are still not aware of the situation. They still have no idea who the Uighurs are. I recently was in Europe to accept the Sakharov award, and I spent a day in Berlin. Even though there was so much media coverage of the award, people that I talked to still had no idea about it.

That makes me really sad. People should be aware of such tragedy like the one that happened with the Uighur community. This high security facility in Xinjiang is supposed to be a re-education center, officially referred to as voluntary ‘Vocational Training Centers’ by the Chinese government

Didn’t the so-called China Cables — which were published in November 2019 — change anything?

Well, finally the leak helped China admitting the existence of the camps, which I was pleased to see. But also it makes me sad that China only did so after we had provided so much proof. Before, they were refusing to admit the existence of those camps. When they finally did, they said they were just re-education centers. But the new leak shows that it’s not just a re-education center. It is not only helping with vocational training. It is also targeting every individual family that is living there.

In the list, DW also found dozens of cases that seemed linked to forced labor.

Yes. The Chinese government claimed that many Uighurs have graduated from those re-education-centers. But the fact is: Yes, they possibly — quote unquote — “graduated” from those camps, but they’ve been transferred to labor camps. A lot of them are forced to work. Some may have a PhD or a Masters or already had a decent job in the past. But they were forced to go to work in a factory to make cartons or clothes. I assume most of the people would not want to be forced to work in a factory, especially with being paid very little. Ilham Tohti, a former economics professor, is one among many Uighur intellectuals who have disappeared from public view.

Your own father was imprisoned in January 2014. Do you have any new information concerning his whereabouts and his physical and psychological state of being?

I haven’t heard about my father since 2017. Family visits were banned since then. Some family members were also afraid to go back to the Uighur region. Other family members who are still in Uighur region are afraid to reach out and find out about the reason why the government is not allowing them to visit my father again. Everybody’s terrorized and horrified with the fact that they could be sent to a camp.

So you still have relatives in the region?

Most of my relatives actually still live in the region, but my stepmother and my two brothers are living in Beijing. They were always living there.

Are you in contact with any relatives in Xinjiang?

(Editor’s note: At this point, Jewher Ilham interrupts the interview briefly and points out that she does not want to talk about her family for security reasons.)

When did you last have the opportunity to speak to your father?

Do you have any information where he could be kept? What is his last known location?

That was in Urumqi’s first prison. There, my family were last able to see him, before 2017.

Do you have any information about the well-being of your relatives in Xinjiang, and about how they are being monitored?

My cousin has been sent to prison and charged for 10 years for having my father’s photo and his article in her phone. She is a nurse, just a few years older than me. She was arrested on the street at one of the checkpoints. In the Uighur region, there are many checkpoints, every few blocks.

There is a desk with two policemen. You have to hand in your phone to let them put tracking devices and an application to it. She refused to do so, but they tried to do it anyways. So they found my father’s photo and his article in her phone. They asked her why she has it. She said:”He’s my uncle.” Then she was arrested.

My father is in an official prison, but I’m not sure about my cousin, because we cannot even find her case on the website for China’s legal system. And there’s so many others who have been charged or sentenced or detained without legal process, without due process.

What can you do from abroad to try to find your father?

I’ve been trying every way — to talk to US delegations, to the US government, European Parliament, the UN. I’ve been trying in every way, but so far I haven’t received any positive information yet.

When your father was first arrested at the airport you went to the States alone and stayed until today. Did you ever return to China since then?

No, I never went back to China. If a person like my father — someone who has such a moderate voice, who has been simply trying to help the Chinese government to relieve the tensions between the Han Chinese and the Uighurs — can be arrested and sentenced to life, I am sure I would be sent to a camp. And I like to have my freedom.

Are there any indicators that you are being monitored by the Chinese in the US?

I am sure of that. I have been suspecting for many years, but now I have proof. For example, there is a website with which you can find out who has been trying to access you mail. Most of the IP addresses I found were from China.

One time I was invited to attend a Uighur wedding. I shared this with my family in China and asked them: What kind of dress should I get? Soon after, the family of this newlywed couple was contacted by the Chinese police in the Uighur region and told they shouldn’t invite someone like me to their weddings or their sisters and brothers could be at risk.

Do you take any precautions to protect yourself in everyday life?

To be honest: I’m not. These monitoring things, they are not unusual to me. I’m very used to it. I experienced it since I was in high school in Beijing. We had recording devices in our living room. So whenever I said anything like “Why does the Chinese police always come?” my father would shush me and point at our lamp or our light in the dining room. At that time I thought my dad was being paranoid and suspicious of everything. But now, everything makes sense.

Did the Chinese authorities ever try to intimidate you in any way?

No, they’ve never reached out to me personally. I’m very surprised about that, actually.

How do you manage to keep up hope that your father will get out of prison one day?