In Mexico, Gas is Fuelling the Flames of Revolt 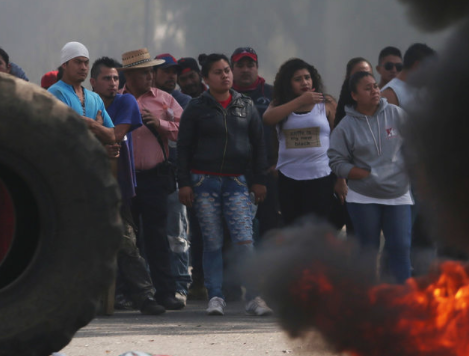 Protesters block the entrance to a Pemex gas station as they burn tires during a protest against the rising prices of gasoline enforced by the Mexican government. Credit: Reuters/Edgard Garrido

It is already clear that 2017 will be a difficult year for Mexico – and not just because it will (or won’t) have to pay for a “big, beautiful wall”.

On New Year’s Day, gas prices in the country jumped 14% to 20% after the Mexican government’s decision to eliminate state oil subsidies.

US politics have also unleashed what Mexico’s central bank president has described as an economic “hurricane”. Immediately after Donald Trump’s election, the Mexican peso dropped 12% against the US dollar, a sign of uncertainty about the future of Mexican exports, such as automobiles and oil.

The spike in fuel prices, or “gasolinazo” (gasoline blow), coupled with the weakened currency, has sparked discontent across the country.

Angry Mexicans have taken the streets in at least 25 states, blockading roads, gas stations and fuel facilities. Looting has led to thousands of arrests.

Is this just a “zero-degree protest” – Slovenian cultural critic Slavoj Žižek’s term for violent actions demanding nothing? Or, as Mexican journalist Carmen Aristegui has suggested, are we witnessing a “Mexican Spring” – a protest movement that could blossom into an organised force for political change?

Under the 2013 overhaul of energy laws, last year Mexico enabled the private sector to import gasoline and open service stations, realms formerly monopolised by the state-run Petróleos Mexicanos. Price controls will be gradually lifted throughout 2017.

These changes are intended to improve the competitiveness of Mexico’s economy. But today Mexicans pay for gasoline almost as much as Australians and Canadians – in a country where the daily minimum wage is currently $3.60.

The Mexican government claims that this domestic privatisation process has simply, and unfortunately, coincided with an increase in the price of international oil.

In a televised address, President Enrique Peña Nieto asked for understanding, saying that if the government hadn’t raised petrol prices, it would have been forced to cut social services.

“I ask you,” Peña Nieto said, “what would you have done?”

Among serious responses, combating corruption is a favoured proposal. Peña Nieto recently apologised for the conflict of interest surrounding his wife’s purchase of a $7 million home from a government contractor. And several high-profile members of his Revolutionary Institutional Party are facing criminal charges, including Javier Duarte, the ex-governor of Veracruz who went missing after being accused of embezzlement.

Cutting government expenditure, some of which is spent on outrageous benefits for public officials, was another popular suggestion.

Though Peña Nieto declared that the government had already cut expenditure by $8.8 billion before raising gas prices, this information was false – in 2015, the government was over budget by $8.6 billion.

The shortfall isn’t necessarily due to expensive social programs. In a country where the average household income is $12,806 a year, Peña Nieto’s government pays out “Christmas bonuses” of $11,000 per senator and $6,500 per congressman.

As the rallies calling for his resignation multiplied, Peña Nieto belatedly outlined measures that he said would help families mitigate the impact of the increase in petrol prices. He promised, for example, to police price increases for staple goods and invest in modernising public transportation.

Mexicans, however, will not be easily appeased this time. A recent opinion poll across the country has shown that 87% of surveyed people believe these measures will not make up for the overnight 20% increase in the price of gasoline.

Upping gas prices thus seems to have been the last straw. Over the past week, gasoline has fuelled the flames of revolt, as deeply discontented Mexicans lash out against a culture of corruption, stagnant politics and a decade of unceasing violence.

It is a surprising moment to announce a cabinet reshuffle, and especially mystifying that Peña Nieto would, on January 4, appoint former finance minister Luis Videgaray to lead Mexico’s foreign ministry.

Not only do Mexicans blame Videgaray for much of the country’s economic woes (as finance minister, he promised that gas prices would not increase), but he is also the person who advocated for then candidate Trump’s August 2016 visit to Mexico.

This strategic error – a public relations embarassment for Peña Nieto and legitimacy booster for Trump – forced Videgaray to resign his post as finance minister.

Videgaray has acknowledged that he is no diplomat, saying – with apparent humility – that he’s “here to learn”. A social media backlash also came quickly after that statement.

Mexico has plenty of career diplomats and ambassadors. But Videgaray is tied to Jared Kushner, Trump’s son-in-law. Peña Nieto may believe that having an amigo in the White House will help temper the Mexico-US relationship under Trump.

Either way, Peña Nieto has sent Trump an apprentice (pun intended!) at a delicate political juncture for Mexico, and the government’s apparent meekness and gullibility in the face of Trump’s aggression has enraged the Mexican people.

Last year, Slavoj Žižek infamously declared that he would prefer Trump win the US election because his brazenly discriminatory and oppressive policy proposals could motivate global resistance and spur change.

Is this what’s happening in Mexico?

In tweet after tweet, Trump has destroyed what Mexicans thought they knew about their nation’s relationship with the US. Not since Woodrow Wilson invaded Veracruz in 1914 has the US shown any interest in openly and extensively destabilising Mexico.

This is basically a matter of prudence: if you set your neighbour’s house on fire, you risk reducing your own home to ashes.

But US’s president-elect seems quite satisfied by the misfortune he is causing down south. “This is just the beginning – much more to follow”, he bragged about Ford revoking its Mexican investments.

Like Karl Marx’s revolutionary bourgeoisie, for Mexico Trump has made all that is solid melt into thin air and all that is holy profane.

The Mexican government’s demonstrated inability to manage the social and economic repercussions of Trump’s election – not to mention whatever happens once he actually takes power – has compelled its citizens, no strangers to revolution, to revolt. Marx would be disappointed if they didn’t.

Looting will not reshape society, of course. As Polish sociologist Zygmunt Bauman says, it is simply an expression of the “defective and disqualified consumers” borne of global capitalism’s failures.

Will Mexico’s gas riots and social media protests develop into real social and political change, a “Mexican spring” to follow this winter of discontent? That’s for the people to decide.