Nearly 50 people took to the streets at Times Square and the UN headquarters in New York with placards and slogans demanding speedy investigation and trial of the perpetrators and justice for the victim's family. 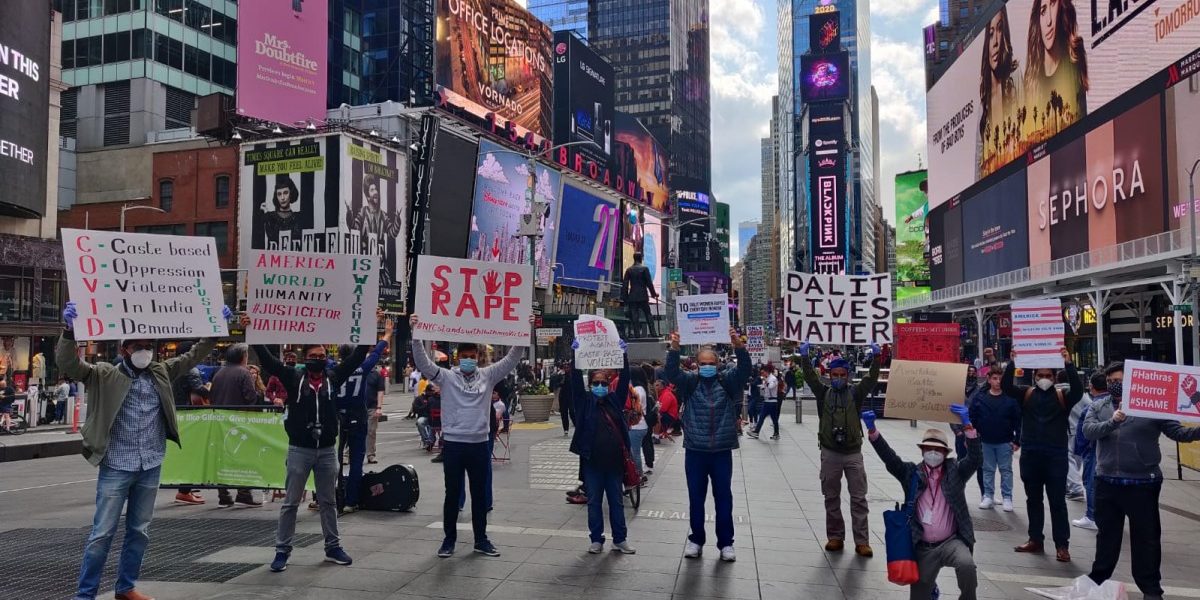 A group of NRI Ambedkarites protest against the Hathras gangrape, on October 4, 2020, at Times Square, New York. Photo: AIM

New Delhi: A group of NRI Ambedkarites on Sunday staged peaceful protests at many places in the US, including New York, New Jersey, Pennsylvania and Michigan, demanding justice for the 19-year-old Dalit woman who was allegedly gangraped by four Thakur men in Hathras, Uttar Pradesh.

The group came together under the banner of Ambedkar International Mission (AIM) to protest against this atrocity and demand justice for the victim and her family through a fair and speedy investigation and trial of the perpetrators. It also demanded stringent action against the officials who are protecting the accused and the government entities complicit in this cover-up.

Nearly 50 people took to the streets at Times Square and the United Nations headquarters in New York with placards and slogans demanding justice for the Dalit woman. Similarly, 20 people in front of Independence Hall in Philadelphia and 20 people in Detroit, Michigan joined in the protest.

“This barbaric incident of Hathras, further compounded with unabashed complicity from police and the government, has enraged and shaken the NRI Dalit community. The immediate and long-term consequences of this savagery, namely, institutionalising a dystopian callousness towards the safety and survival of the Dalits in India, compelled us to come out and express our outrage and apprehensions. Through this protest, we also appeal to the international community and the United Nations Human Rights Council for their support in the struggle against rampant atrocities on Dalits in India,” the AIM said in a press release.

“One of the remarkable aspects of this event was when the local Americans approached with curiosity about the protest. When protesters explained the grim situation in India to them, it was heartening to see them spontaneously join the protest and lend their support to it,” it added.

The group has submitted petitions to the International Human Right bodies like the United Nations, Amnesty International, demanding their intervention into the issue of caste-based violence and atrocities in India.