After decades of murderous attacks on migrants and leftists, on Wednesday, a Greek court ruled that Golden Dawn is a criminal organisation. The verdict is a triumph for victims, and for the minorities targeted by the neo-Nazi party. 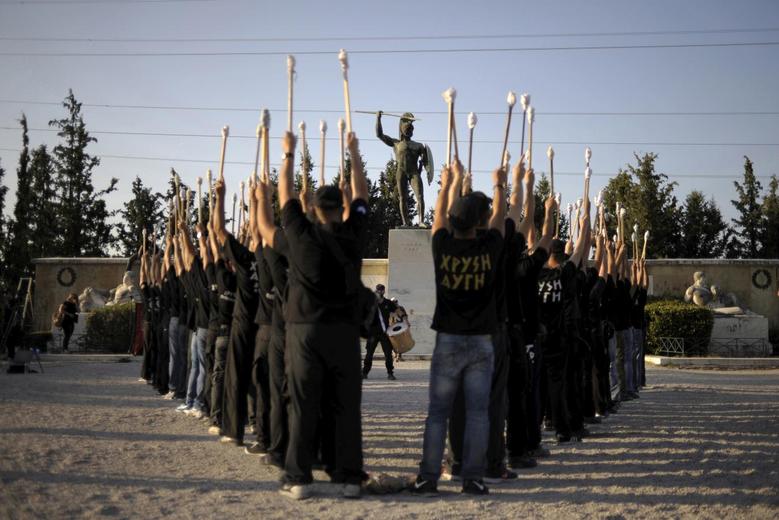 Magda Fyssas exited the Athens courtroom after the verdict, raising her fists. “You did it! My son, you did it!” she shouted, her voice hoarse. Around the court, a crowd of tens of thousands chanted the name of her late son: “Pavlos lives! Smash the Nazis!”

The verdict in the criminal case against Greece’s neo-Nazi Golden Dawn party was announced on Wednesday morning, after a trial that spanned five and a half years. The party was found guilty of an attack on members of a trade union, the attempted murder of a group of Egyptian fishermen, and, most famously, the murder of anti-fascist rapper Pavlos Fyssas — the son that Magda Fyssas invoked on the court steps. The case culminated with the ruling that Golden Dawn was founded and operated as a criminal organisation. As news filtered out of the courtroom, a cheer ripped across the crowd. 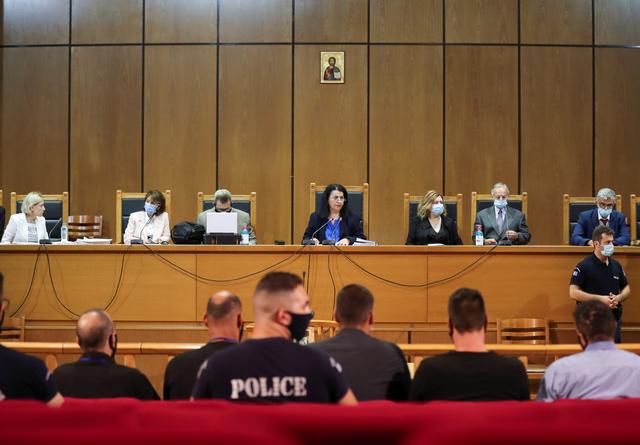 “This is a historic decision from the justice system,” said Lefteris Papagiannakis of Golden Dawn Watch, a court observatory that has tracked every twist and turn in the half decade of trial. “It recognises something that many of us have said for many years. And that the anti-fascist movement has been saying for decades — that Golden Dawn is a criminal organisation.”

The case against Golden Dawn captivated Greece, partly because of its vast scale. There were 69 defendants (18 of whom were former members of Parliament) charged with more than a hundred violent incidents, in a trial involving 120 witnesses and taking up 454 days in court. But the case also illuminated the fault lines in a country facing crushing economic crisis, the rise of the far right, and an influx of migrants. For decades, Golden Dawn positioned themselves in the centre of these forces — arguing that their fascist ideology and violent actions could solve Greece’s problems. The ruling has now come as a welcome blow, but it is unclear if it truly marks the end of the movement.

Golden Dawn was created in 1980, as a propaganda magazine that frequently praised Adolf Hitler and other fascists and antisemites. The organisation grew, was recognised as a political party in 1993, and began to gain traction amid Greece’s far right by pushing itself into the centre of debates about the Macedonian name dispute and fomenting fear of migrants. In the late 2000s, as Greece weathered a debilitating economic crisis followed by years of austerity, Golden Dawn positioned itself as the only advocate for downtrodden Greeks. In 2010, party leader Nikolaos Michaloliakos, called the “Supreme Führer” by party members, was voted into the Athens city council. In Greece’s 2012 parliamentary elections, the party won 7% of the votes, and thus eighteen seats in Parliament.

A constant through these decades was Golden Dawn’s brutal use of violence. The key to Golden Dawn’s structure was its battalion squads, which — under the specific direction of party leaders — patrolled neighbourhoods with the aim to beat, torture, and kill anyone who stood outside of their worldview, particularly focusing on migrants. Attacks were rarely reported to the police, both due to victims’ concerns about their immigration status, and the well-known fact that Golden Dawn enjoyed police support. After the 2012 elections, several Greek newspapers and television stations estimated that more than 50 percent of special service police officers in Athens voted for the neo-Nazi party. In neighbourhoods like Athens’s Agios Panteleimonas or the Port of Piraeus, Golden Dawn squads beat and knifed migrants with impunity.

Also read: Greece Is Dropping Migrants into the Sea – And Europe Is Turning a Blind Eye

“It was an atmosphere of fear,” said Naim Elghandour, the president of the Muslim Association of Greece. “We told people not to hold more than 20 euros on them. To carry photocopies of your ID, not the real one, don’t go outside alone, have someone stationed outside during prayers.”

When, in 2012, Elghandour received a call from a group of Egyptian fishermen beaten within an inch of their lives by a Golden Dawn squad in their own homes, he was not surprised. As a witness in the recent trial, he gave testimony about this attack, along with several mosque burnings, beatings, and instances of torture. Elghandour has himself been threatened by the group.

“They had strength and they had power,” he said. “They used populism, and the crisis helped them.”

After the 2012 election, the group’s violent attacks became bolder. “In 2012, when they first entered the parliament, many thought they would change and become a normal political party, far right, of course, but normal,” said Dimitri Psarras, a journalist who has reported on Golden Dawn since the 1980s. “But this did not happen. On the contrary, they gained courage and began to be more violent and more criminal.”

On September 18, 2013, a Golden Dawn squad executed the planned murder of anti-fascist rapper Pavlos Fyssas, beating and then stabbing him. In a video reconstruction of the night created by the Forensic Architecture research team at London’s Goldsmiths University, it becomes clear that a convoy of motorcycles arrived from the Golden Dawn regional headquarters to a bar where Fyssas and his friends were watching a football match. “We can see Pavlos being attacked in waves,” said Stefanos Levidis, the coordinator of the investigation. “They held him there until the killer arrived. All this points to something that was organized.” 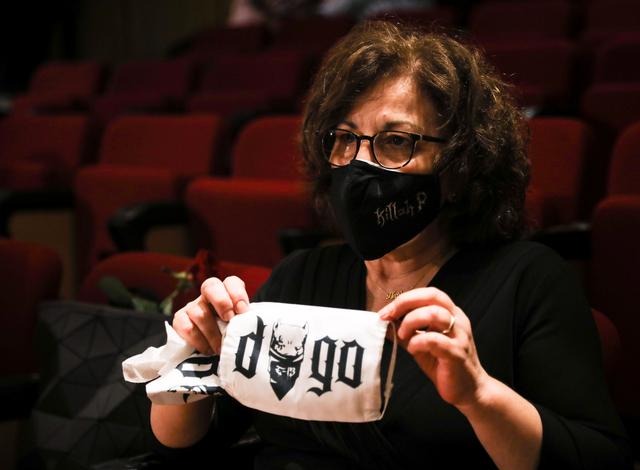 The investigation also revealed that the Greek police had been present at the time of the murder, despite their testimony that they arrived too late to do anything. “It’s not my role to say if that is criminal,” said Levidis, “but it is clear they could have done something.”

The murder of a young Greek man, already well known for his music, created an outrage in Greece — and catapulted discussions of Golden Dawn’s violence to the forefront of public conversation. Ten days after Pavlos’s murder, the leader and several other prominent members of Golden Dawn were arrested on charges of directing a criminal organisation. In February 2015, a judicial council announced that sixty-nine individuals would be tried.

The evidence in the trial was vast and overwhelming. Lawyers proved that the violence was directed from the very top of the organisation, with a specific and obsessive Nazi ideology. Magda Fyssas has attended every single day in the winding court case, bereaved but firm, becoming a beloved symbol of anti-fascist resistance among Greeks.

Through years of proceedings, Golden Dawn’s popularity began to wane. In 2019, it did not get enough votes to enter Parliament, and it had to close its central Athens office. The decision this Wednesday looks to be the final nail in the coffin. “It chills the face of Golden Dawn and gives a strong signal to whoever wants to take the place of Golden Dawn,” said Papagiannakis of Golden Dawn Watch.

To be sure, there are many who want to take Golden Dawn’s place. In 2019, as the neo-Nazi party was voted out, the far-right Greek Solution party gained ten seats in Parliament. In the past year, two prominent former Golden Dawn Members started their own far-right parties: called “National Popular Consciousness” and “Greeks for the Fatherland.” The party has also created a multifaceted network of far-right fanatics from Germany, Belarus, Hungary, Ukraine, and beyond. Their tactics inspire racists internationally — in 2017, a white nationalist at the violent Charlottesville rally specifically noted that they used organising tactics modelled by Golden Dawn.

And though Golden Dawn’s battalion squads no longer patrol the streets of Athens, hate crimes against migrants are ongoing. Vassilis Tsarnas, a researcher for the Greek Helsinki Monitor, an organisation that tracks hate speech and violent crimes in Greece, said that since last year, he has seen an increase in hate crimes. “However, this ruling is a really vital minimum, showcasing that the rule of law in the country isn’t completely broken.”

Psarras, who has dedicated almost the past forty years of his life to documenting the crimes of Golden Dawn, remained cautiously optimistic. “Of course, this does not mean this is the end of the far right, or of racism,” he said. “It does not mean these will not exist in Greek society, or that they will not make another party. No. But we will not have a political party that enters in the night and murders, smashes, and beats people it deems subhuman.”

The case against Golden Dawn has provided a rare moment of unity in Greece. For the past month, Greek social media has been overwhelmed with posts stating, “They are not innocent.” The leaders of the country’s largest political parties — usually loath to agree on anything — both finally put out statements condemning the neo-Nazi party. Athens has been covered with banners and signs, whether hoisted by anarchist groups or esteemed art museums — all pointing to the case.

On Wednesday morning, a crowd of around twenty thousand gathered outside Athens’s Supreme Civil and Criminal Court, anxious and hopeful. Word of the ruling was announced on a loudspeaker and met with instant cheers. Amid hugs, people lifted fists into the air, defiant.

Elghadour waited all morning just outside the doors of the courtroom. Previously, he had spoken at length about the burgeoning far right in Greece and the need for ongoing vigilance. But the ruling was an undeniable moment of victory. When he heard the verdict, he began to cry, and he held his wife, and they cried together. “We did it,” he told me on the phone. “After so many years of struggle. Against the fascism, the racism, the hate. We did it.”

Moira Lavelle is an independent reporter based in Athens, Greece. She covers migration, borders, gender, and language.