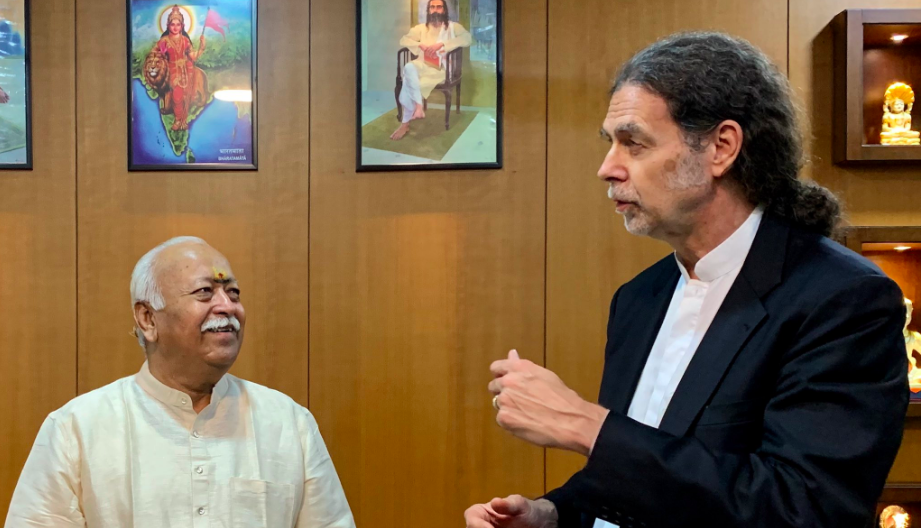 The Rashtriya Swayamsevak Sangh has never made any secret of its love for Adolf Hitler. Both its first sarsangchalak M.S. Golwalkar and one of the organisation’s (and in general, that of Hindutva followers’) heroes, V.D. Savarkar, were admirers of Hitler, mainly for his “cultural nationalism” and his persecution of the Jews — the latter even warning that one day Muslims of the “League type” would “play the part of German Jews”.

The German ambassador to India, Walter J. Lindner, would not have been unaware of this – to use his own double negative terminology – when he made a trip to Nagpur, to meet Mohan Bhagwat, the RSS chief. He would have surely read in his briefing notes that the RSS has been banned twice, once in the aftermath of Mahatma Gandhi’s assassination, and has been accused of violence and much more.

Visit of Headquarters of RSS (Rashtriya Swayamsevak Sangh) in Nagpur and long meeting with its Sarsanghchalak (Chief) Dr Mohan Bhagwat. Founded 1925, it is world’s largest voluntary organization – though not uncontroversialy perceived throughout its history… pic.twitter.com/B5cFUpw1ml

Given how carefully Germany in the post-War years has worked to eliminate Nazism and all its manifestations, he also would have known what signals his visit would send. Yet, he went anyway and is now being criticised on social media. So was it an educational trip, a simple outreach to a key player in India or a diplomatic gaffe? Did they discuss Hitler, life in Nazi Germany, the Holocaust or the Nuremberg Trials?

Diplomats are supposed to represent their countries in foreign lands, and during their term, reach out to all kinds of people to get an understanding of the societies they are posted in. A good diplomat will meet not just government officials or politicians from the ruling party, but also leaders of the opposition, academics, media, cultural figures and representatives from the corporate sector. Beyond official business, many diplomats also try and explore facets of the country they are interested in, be it history, nature or traditions. I knew of one who set out to walk in the city on the weekends, to get a flavour of the city and to practice her Hindi. 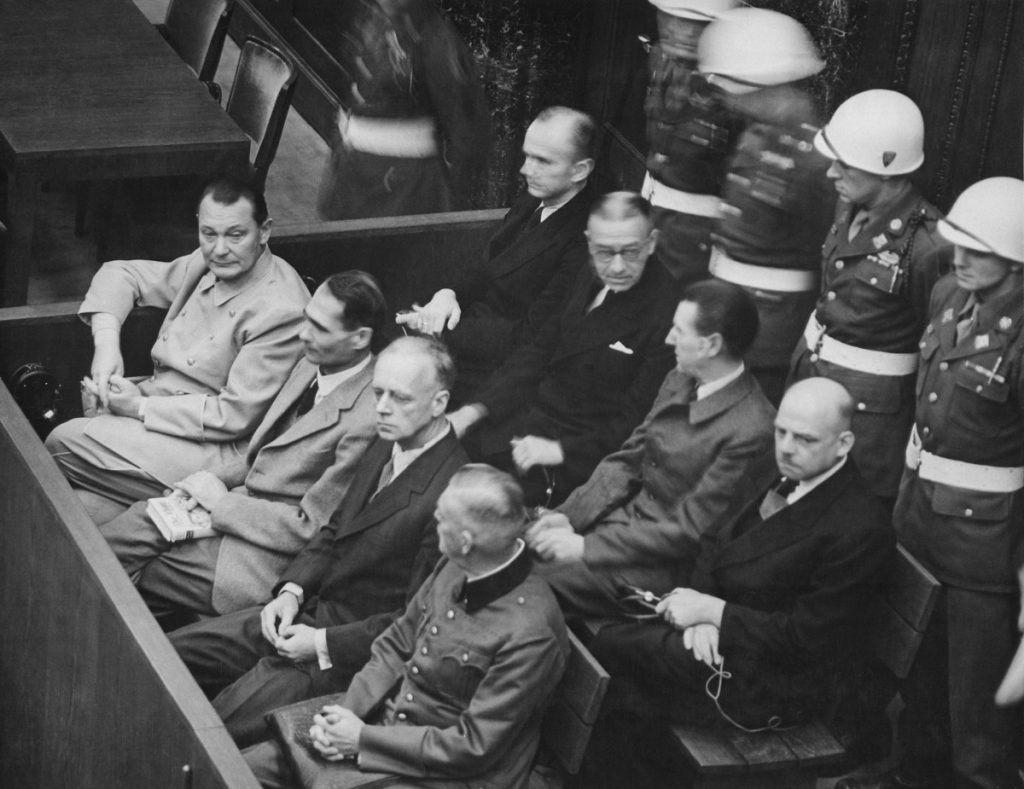 Defendants in the dock at the Nuremberg trials. The main target of the prosecution was Hermann Göring (at the left edge on the first row of benches). Photo: Work of the United States Government, Public Domain

But how does one read the visit of German ambassador Lindner to the headquarters of the RSS, the self-proclaimed “cultural organisation” that is the font of the Hindutva ideology proclaimed not just by the ruling party and the government but also a large number of organisations that are spread throughout the country?

The obvious interpretation is that Lindner wanted to meet the chieftains of the organisation that exercises a lot of power but has no official status or, indeed, responsibility. Occasional protestations notwithstanding, it is hardly a secret that the RSS is fully involved in not just influencing political strategy but also economic, social and cultural policy. Narendra Modi and Amit Shah are powerful no doubt and may also at times pay little heed to what the apparatchiks of Nagpur think, but they are steeped in RSS culture and thinking and small differences of opinion apart, there is not going to be much deviation in their own long term view.

Even Atal Bihari Vajpayee and L.K. Advani were RSS-groomed, but they ran a coalition and there were constraints on how far they could go. But assessments that Vajpayee was “his own man” are over optimistic — the RSS got its way in some cabinet appointments and its socio-cultural policies did find expression in the Vajpayee government. But with no coalition partners to act as a check, the Narendra Modi government is rapidly reshaping institutions and the country itself in line with Hindutva. Never has the RSS been stronger in its 90 plus years.

By itself, there is scope to take a charitable view of Lindner’s trip for the ambassador wanting to see for himself what the RSS is all about. Diplomats are not whimsical people, especially at the level of an ambassador in an important country. They are seasoned professionals, educated and astute, and moreover, backed by vast resources and research, and with their country’s interest uppermost in their minds. 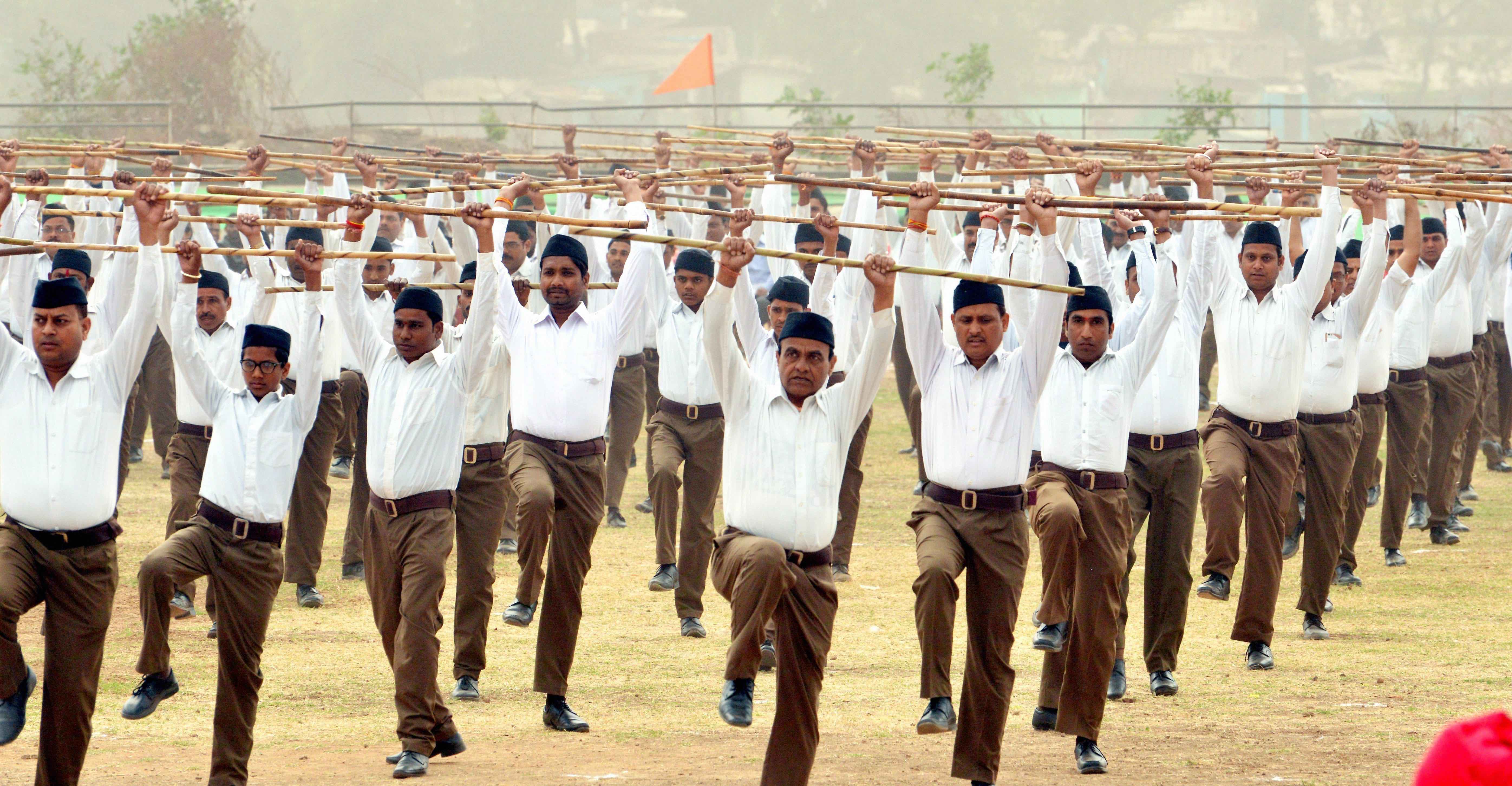 The German ambassador would have not only taken the decision to visit the RSS headquarters with due consideration and a lot of thinking, he would have also cleared it from his own government. It is reasonable to conjecture that he would have done his reading about the RSS. It is important to keep that in mind when assessing his visit, which has drawn so much negative attention, especially on social media. There is even a petition to get him recalled, which is likely a non-starter because his government is not going to take such drastic action based on some Twitter criticism.

But had he just gone and confined himself to sending his own confidential report to his bosses, the matter would have not assumed the profile it has; there would not even have been much criticism. But Lindner chose to attract attention to it with a startling tweet about his visit, calling the RSS “the world’s largest voluntary organisation — though not perceived uncontroversially throughout its history”.

Also read: The RSS Stands for Principles That Are in Violation of the Indian Constitution

His Excellency may have thought he was making a point with customary diplomatic tact, but it ends up sounding like an apology of a comment, at one level anodyne and diplomatic, at another — given what we know about the RSS — an understatement to end all understatements.

Imagine Donald Trump’s ambassador meeting neo-Nazis in Germany and stating that this bunch of white supremacist thugs hold “some unconventional views”, or describing skinheads in Britain — where a large population of South Asian origin lives — as people “occasionally express themselves with great force.” Or indeed saying that a victim of a particularly horrendous accident appeared to be “not in inconsiderable pain.” With the ‘perceived to be’, he puts the onus on the beholder, rather than on empirical evidence.

The British are known for euphemistic comments—this way they add an extra emphasis to what they want to actually say. The Germans are more direct and the language is known for its precision, with words that mean what they say. Had he exerted himself, Herr Lindner would have surely hit upon the exact German word to describe the RSS — one could suggest a few English ones in case he needs them.

As for “voluntary organisation”, this is technically a correct description. The RSS does not pressure anyone into joining. But again, that portrays them as some kind of cuddly group of do-gooders with a benign agenda, which we know it is not.

The RSS would be very pleased at the visit—it has been trying to get tacit mainstream approval and respectability, and in recent years has hosted former president (and a long standing Congress man) Pranab Mukherjee and Ratan Tata. There may have been other, less high profile visits. The German ambassador’s tour would have been welcome, in that it gives brownie propaganda points beyond Indian borders.

After the Gujarat killings in 2002, many foreign diplomats stayed away from Gandhinagar. The Americans declared they would not give a visa to Narendra Modi and other western governments followed its lead. Once the Vibrant Gujarat jamborees began, however, the diplomats started trickling back.

A few countries had already made contact with Modi — he had visited Japan in 2007 when other countries were shunning him. This began his international rehabilitation and soon enough foreign investors and diplomats were beating a path to his office. All of them were attracted by business possibilities and had fully bought into the Gujarat model. It will not be surprising if other western diplomats now head to one of the most important power centres in India in Nagpur to establish links with the RSS.

Consider the possibility — and the irony — if Bhagwat visits Germany and makes a trip to the Holocaust Museum.

It is unlikely that ambassador Lindner will be recalled by his government, unless he has gone beyond his remit and taken a step without consulting his superiors. And the Indian government is not likely to declare him PNG (persona non grata) as it might if he went and visited some chauvinist Muslim or Sikh group; why should it? But while it may not have direct repercussions on him or on Indo-German relations, His Excellency must know that he has taken a step which is fraught with implications in a country that fears for its future. The RSS not just admires Hitler and the Nazis, it is putting in place structures and processes, and unleashing spirits, that were seen during those terrible times in his own country. Germany has not fully exorcised those ghosts; India is well on the way to getting its own nightmare.