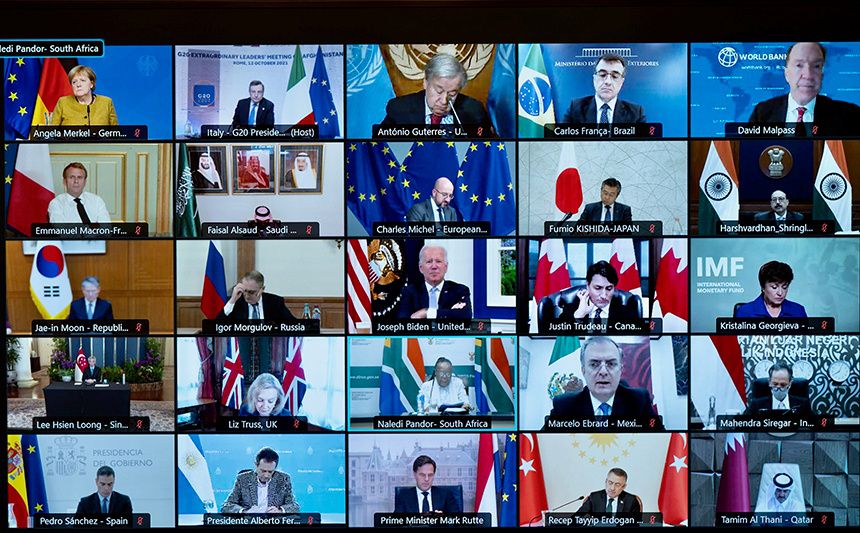 New Delhi: With Afghanistan hurtling towards a humanitarian catastrophe, major global economies agreed on Tuesday, October 12, to jointly back the United Nations in sending urgently required assistance without formal recognition of the Taliban. Indian Prime Minister Narendra Modi asserted that the war-ravaged country should receive an “immediate and unhindered” relief supply from the international community.

On Tuesday, Italian prime minister Mario Draghi hosted an ‘extraordinary leaders’ summit’ to discuss the looming humanitarian disaster in Afghanistan after the Taliban took control over the entire country on August 15.

Following the collapse of the Afghan republic and the Taliban walking into the capital, the United States had frozen access to over $9 billion of international reserve funds. The International Monetary Fund had also suspended the distribution of $400 million in currency reserves.

With the Taliban scrambling for measures to deal with the capital shortage, the Afghan economy is on its knees and the banking system is near collapse. Thousands of government employees have not been given their salaries, which has, in turn, paralysed all economic activity.

The Taliban has been seeking humanitarian aid urgently but asserted that it should not be conditional.

The closed-door virtual meeting on Tuesday was touted by G-20 chair Italy as the first multilateral response to the developing Afghanistan crisis.

The Russian President Vladimir Putin and Chinese President Xi Jinping – both key backers of the Taliban – skipped the special summit. Russia is holding its own conference on Afghanistan on October 20, with Iran announcing a similar initiative with Afghanistan’s neighbours.

At the end of the hour-long G-20 conference, Italian PM Draghi told reporters that there was a consensus to tackle the humanitarian emergency.

“Nearly everyone agrees that we need the take a unified stance vis-à-vis the goal that we have set ourselves…There is a general mandate for the UN to coordinate the reply and mandate that will allow UN to take the direct action,” he said. Similarly, he added that Kabul airport would also have to be operationalised to ensure supplies can be brought in safely.

The White House statement on the summit said that the leaders “reaffirmed their collective commitment to provide humanitarian assistance directly to the Afghan people through independent international organisations”. In the same sentence, there was reiteration about commitment to promoting “fundamental human rights for all Afghans, including women, girls, and members of minority groups”.

In the post-summit press conference, Draghi also said that addressing the humanitarian crisis would require contacts with the Taliban. “There is no alternative to having contact with them…that does not imply recognition. For recognition, Taliban will be judged by what their deeds are, not words”.

He also asserted that the Taliban government was “not really inclusive” and women’s rights were “going back 20 years”.

“Recognition by most of the G-20 countries means progress has been made along the lines of the words and commitment made by the Taliban a few days ago,” said Draghi.

He acknowledged that the “near term” priority was to save “whatever is left of the banking system. “If it (banking system) collapses, it will be very difficult to provide humanitarian aid. So both go hand in hand”.

In his four-minute-long speech, Modi underlined “the need for the international community to ensure that Afghanistan has immediate and unhindered access to humanitarian assistance”, as per a media release from the Prime Ministers’ office.

At an UN-backed donor conference last month, India had also called for a “non-discriminatory distribution of humanitarian assistance across all sections of the Afghan society”. India has not announced any new aid contribution towards Afghanistan, with the expectation that it would do so “as the picture becomes clear in respect of the legitimate concerns”.

During the G-20 conference, Modi also reiterated India’s support for an “inclusive administration in Afghanistan, which includes women and minorities”. He also supported the role of the UN and called on the G-20 to recommit to the “message contained in UN Security Council Resolution 2593 on Afghanistan”.

“The Prime Minister called on the international community to forge a unified international response without which it would be difficult to bring about the desired change in Afghanistan’s situation,” said the press note.

The Italian G-20 chair also said that the leaders agreed that Afghanistan should not become a haven for terrorism. Modi also underlined this point while calling for strengthening the joint fight against “the nexus of radicalisation, terrorism and the smuggling of drugs and arms in the region”.