The former White House chief strategist's return signals the intensification of the bare-knuckle methods and messaging that may make the 2016 campaign seem mild by comparison. 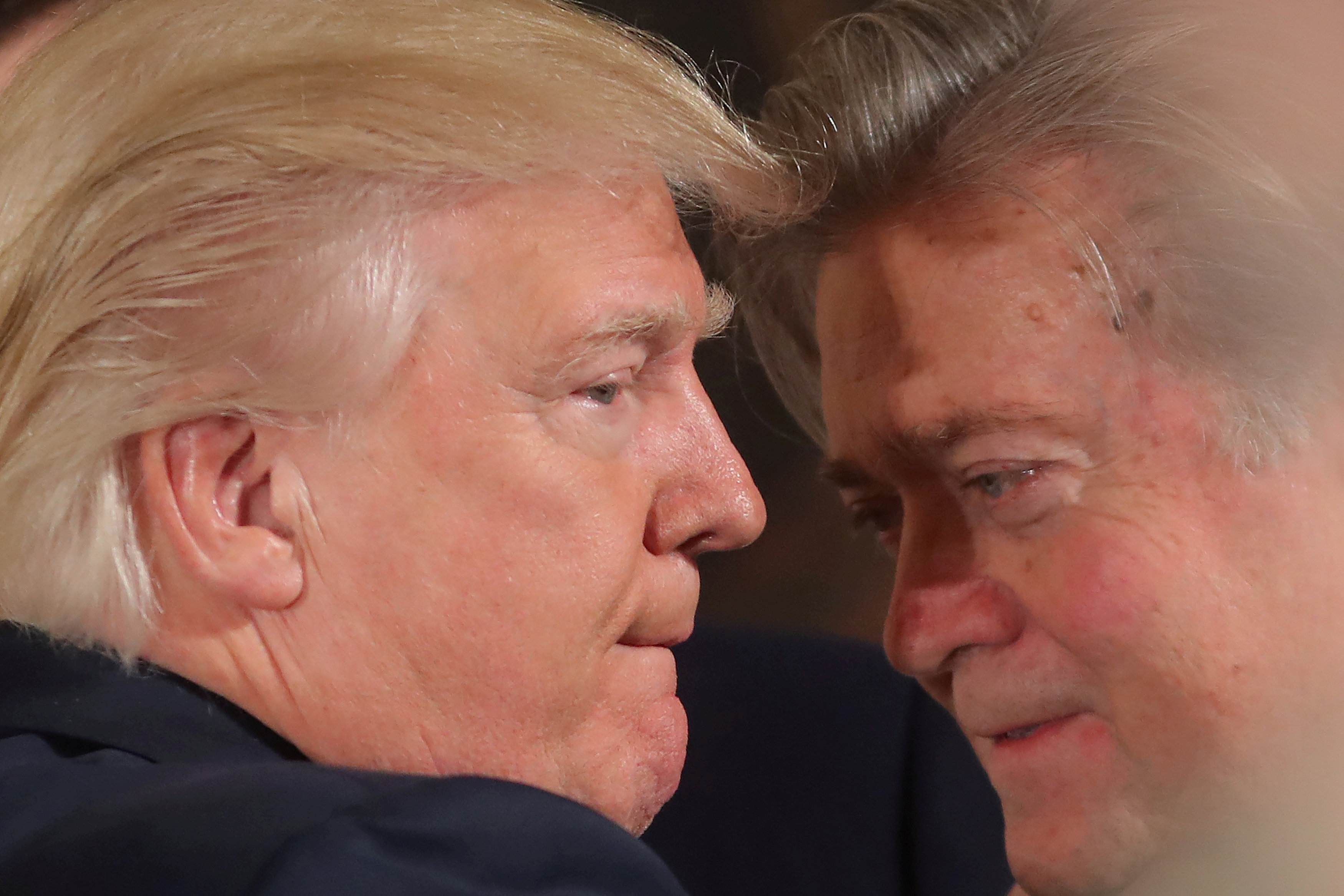 Stephen Bannon, Donald Trump’s erstwhile chief strategist, is reportedly returning to rescue the American president from defeat in the November 2020 elections, due largely to mishandling the COVID-19 pandemic and an economy that’s heading towards the deepest depression since the 1930s. In early March, Bannon declared the global pandemic Trump’s ‘Churchill and FDR moment‘. Instead, it has turned into a political and economic disaster of historic proportions as tens of thousands of Americans have lost their lives to the coronavirus. President Trump’s tardiness, incompetence, political divisiveness, and rejection of scientific and expert advice are widely seen as exacerbating the crisis.

Bannon, CEO of Trump’s 2016 shock election victory, is reportedly close to several senior White House staffers – especially Stephen Miller – and may be recalled to have assisted Trump in digging himself out of a hole largely of his own making. President Trump, contrary to Bannon’s prediction, appears to be snatching defeat from the jaws of victory. Nevertheless, Bannon’s obsession with China’s growing stature and his support for alt-right (i.e., fascistic) positions on non-white immigration suggests he is tailor-made for the final months of Trump’s 2020 effort to remain in the White House.

But the ‘miracle’ of 2016 – when Trump won with a minority of the popular vote – occurred under quite specific conditions which, in the main, do not apply in 2020. Nevertheless, the return of Bannon – unofficial or official – signals the intensification of the bare-knuckle methods and messaging that may make the 2016 campaign seem mild by comparison.

The struggle is to shore up Trump’s loyal base, to win over a majority of independents, and slice away Democratic voters unhappy with Biden’s likely presidential nomination. And Trump, and his extreme, and alt-right supporters are not particularly concerned with the ‘collateral damage’ in the process to the American people and system. They are already citing the necessity of bloodshed to nourish the ‘tree of liberty’ – which we have seen the stirrings of in the heavily-armed ‘liberate Michigan’ etc movements orchestrated by the GOP, its billionaire backers, and the Trump administration. 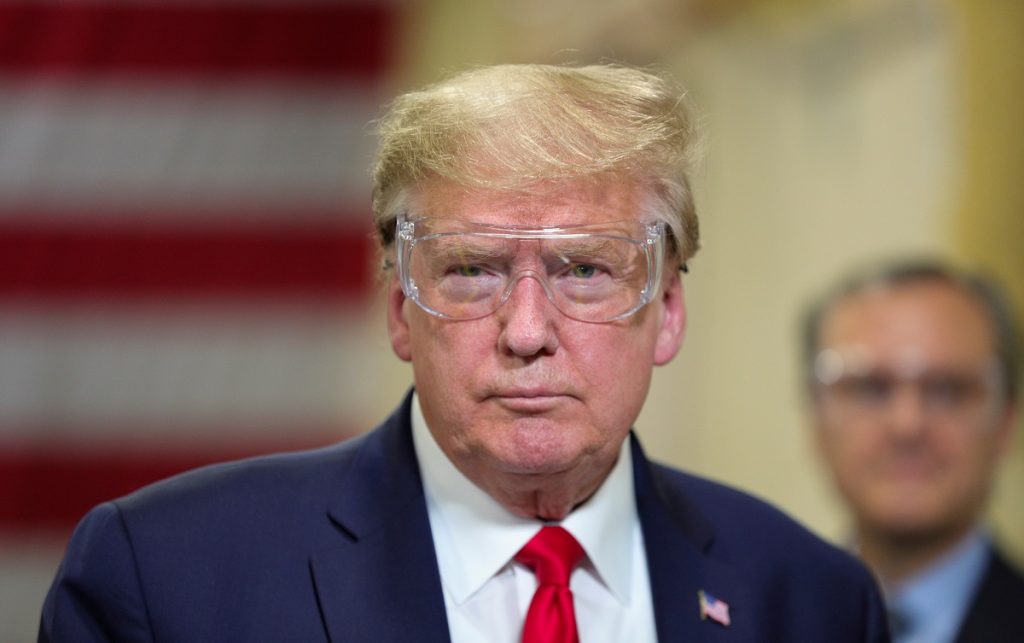 US President Donald Trump looks at an assembly line during a tour of Honeywell’s facility manufacturing protective face masks for COVID-19 in Phoenix, Arizona, US, May 5, 2020. Photo: REUTERS/Tom Brenner/File Photo

The 2019 resurrection of the Committee on the Present Danger – China (CPD-C) is instructive. Bannon is among the leaders of the ultra-hawkish advocacy group. It indicates a renewed desire to contain and pressurise China, to foment regime change via the delegitimisation of the Communist Party. This is in line with official US policy that designates China a ‘strategic rival’ aiming to displace the United States from its hegemonic positions in east Asia and globally. CPD-C is reportedly funded by a billionaire Chinese businessman, Miles Kwok (aka Guo Wengui), a Bannon ally. CPD-C’s target is the Chinese Communist Party’s rule which, it claims, is oppressing the Chinese people, threatening the liberal norms of the international order, and the security and primacy of the West.

It is the CPD’s fourth incarnation: first formed during the Korean War in 1950, it was thoroughly networked with the most hawkish militarists within and beyond the Truman administration. It helped militarise George Kennan’s political ‘containment’ strategy against alleged Soviet expansionism. The CPD, which was linked with the authors and supporters of NSC-68 (including Dean Acheson and Paul Nitze), inflated the Soviet threat and demanded a massive increase in the US military budget. Written in April 1950, NSC-68 was dismissed as wildly unrealistic by President Harry S. Truman as Congress debated cutting the military budget. With the outbreak of the Korean War in June 1950, however, and its definition by Acheson and Truman as the opening shots of a Soviet bid for world domination, the message of NSC-68 was driven home. Its result was the boosting of NATO, the rearmament of West Germany, and the rise of the ‘military-industrial complex’ that President Dwight Eisenhower warned Americans about as he left office in 1961.

Also Read: 75 Years After Fascism’s Defeat, Trump and Others Have Thrown Its Main Lesson to the Wind

The mid-1970s saw the revival of the CPD, this time against US-Soviet détente, to counter the ‘Soviet threat’ across the world and reverse the ‘decline’ of American power in the wake of the defeat in Vietnam and Watergate scandal that brought down President Richard Nixon. Ronald Reagan rode the wave and swept into power, defeating Jimmy Carter in 1980, to ‘make America great again’. Again, over two dozen CPD members were appointed to senior positions in the Reagan administration – George Schultz as secretary of state and William Casey as CIA director. The Reagan administrations presided over a massive expansion of military power to ‘rollback’ alleged Soviet expansionism, fuelling a second cold war, and bringing the world alarmingly close to a much-feared nuclear war.

The post-9/11 war on terror inspired the third iteration of the CPD: to run a neo-conservative led campaign that defined ‘Islamic terrorism’ or ‘Islamofascism’ as the equivalent of the communist threat that had to be destroyed. It was backed by Senator Joe Lieberman, James Woolsey (Bill Clinton’s CIA director), and Paul Nitze – who had been present at the creation in 1950.

The focus on China in the fourth coming of the CPD unifies the Trump administration and key networks that see China as a threat to US and western power. As Trump’s former head of policy planning at the state department stated, US rivalry with China is particularly intense because “it’s the first time that we will have a great-power competitor that is not Caucasian.” It revealed, according to University of Connecticut political scientist Paul Musgrave, “the racist, and dangerous, lens of the new U.S. statecraft.”

Bannon is a warrior preparing for inevitable global violence. He genuinely believes that a global religio-racial war between the West and the rest is inevitable and that the West, especially the US, has been weakened by liberals’ tolerance of diversity – which, to his alt-right mind equates to “white genocide” – and that Muslims, Chinese and pretty much the entire non-white world are on the march against Judaeo-Christian civilisation. He thinks that American history specifically is heading towards a so-called ‘fourth turn’ – with each previous turn ending in massive violence – from the Revolution, through the Civil War, and WWII.

Bannon is a hardcore racist opponent of immigration, nostalgic for a golden age of white, male dominance, who has added a few Italian fascist intellectuals’ dark fantasies to his lexicon.

But before world war, there is business closer to home for the Bannon-Trump axis – to liquidate the “enemies of the American people” in preparation for a battle royale for Western global supremacy. After destroying liberals and Democrats, Bannonites aim to eliminate the Republican party’s leadership and shift the party even closer to the fascistic right. The new-look GOP will then become a thinly-veiled white supremacist organisation at the core of which is a corporate-military hyper-nationalism, an authoritarian state headed by an imperial presidency.

The CPD-C, then, is an important step in that strategy, making essential Trump’s re-election.

The CPD-C’s networks include the right-wing Washington Times – numerous of the CPD-C’s supporters and members contribute articles and columns to the nativist newspaper. Its current opinion editor is Charles Hurt who also contributes to Fox News and Bannon’s old perch, Breitbart News. Bannon referred to Breitbart as a platform for the ‘alt-right’ i.e, American racists and fascists. 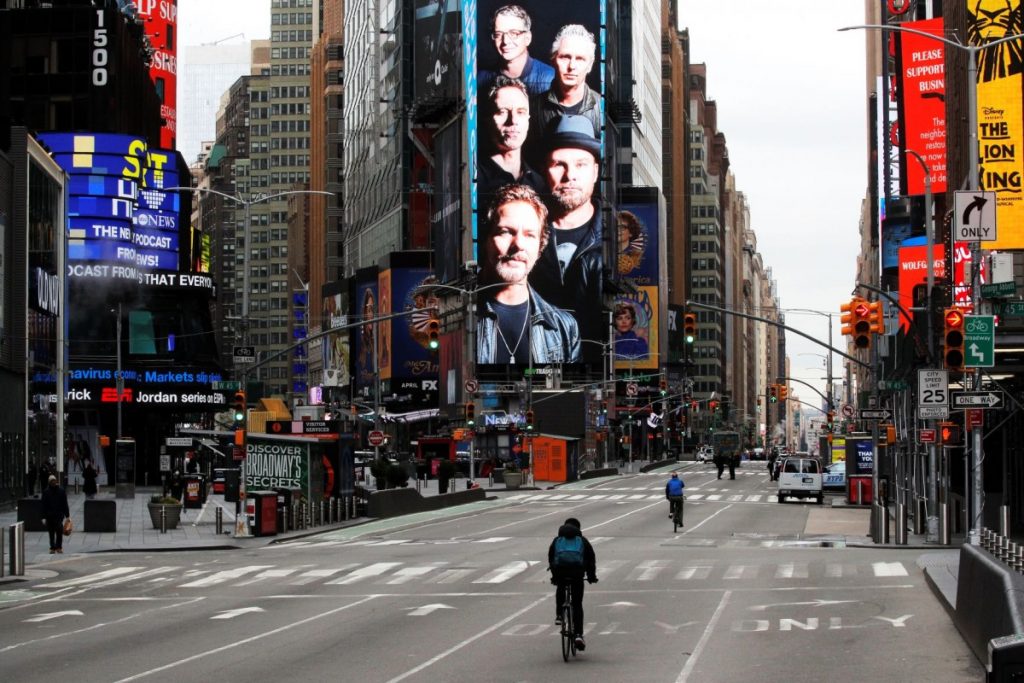 It was the Washington Times that ‘broke’ the story (on January 26, 2020) that the coronavirus was either accidentally or deliberately leaked from the Wuhan Institute of Virology in China – based on an interview with a former Israeli intelligence officer. No evidence was provided to support the allegations but the message was picked up and amplified by Steve Bannon’s podcast programme – War Room – and, subsequently, moved all the way up to the Trump administration. Trump had previously heaped praise on President Xi Jinping for his handling of the Covid-19 crisis.

Bannon is also close to Mark Meadows, who replaced Mick Mulvaney as White House chief of staff at the end of March 2020. And he is very close to Stephen Miller who is the quiet architect of President Trump’s immigration policies, Muslim travel bans, and coherent legitimiser of Trump’s broadly white nationalist or white supremacist ‘America First’ views.

The Southern Poverty Law Center recently revealed Miller’s extensive private email correspondence with a reporter at Breitbart News that exposed the former as promoting the most backward racist theories including ‘white genocide’. That is, the idea that the Euro-American white race is facing extinction and replacement by non-whites.

The revelations brought forth a congressional resolution calling for Miller’s removal from the White House: “…a known white nationalist and believer of white supremacist ideology in a position of power and influence over federal policy,” declared Texas congressman Joaquin Castro. “Americans…will never forget it was President Trump and Stephen Miller’s hateful rhetoric that helped inspire the deadly attack in El Paso where 22 individuals were killed for being Latino…” California Congresswoman Judy Chu stated that “..Miller…has been more than willing to disseminate and amplify white supremacist and neo-Nazi propaganda…” 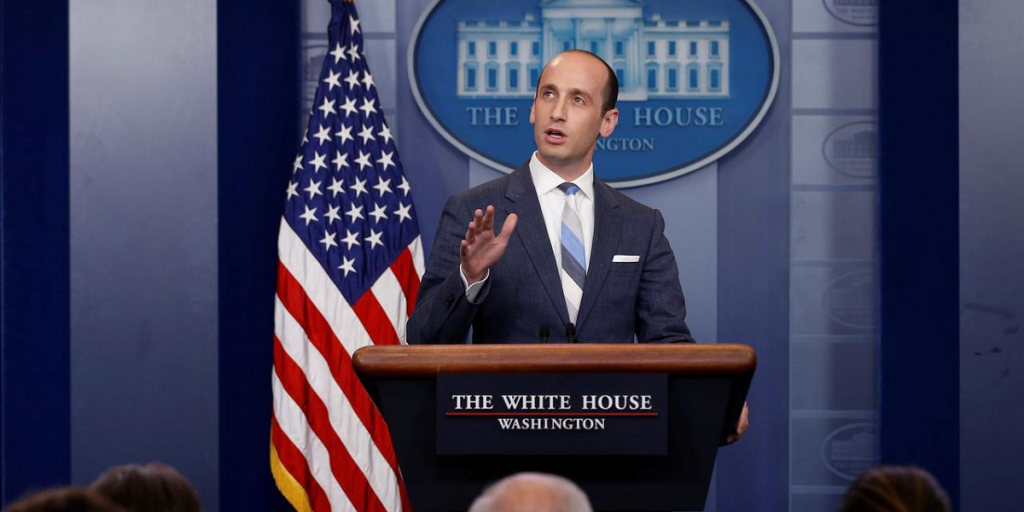 But things are very different this time – the global pandemic may yet claim the life of the Trump administration. There is a massive death toll, and it is still rising; some suggest the final tally may number in the hundreds of thousands. And death is reaching all parts of America’s political map, including GOP-dominated states which had previously appeared remote and exempt. Ironically, the Trump-backed “liberate Michigan” protestors – some of whom travelled hundreds of miles to join the rallies and to storm the state capitol, spread the coronavirus on returning to their rural communities. And a desperate desire especially of the economy-obsessed President Trump to reopen businesses threatens a dreadful ‘second wave’ that, according to experts, maybe even more devastating than the initial phase.

Worryingly for President Trump, 70% of Republican voters, and a staggering 88% of Democrats, support the continuation of restrictions to protect lives.

And Joe Biden is not Hillary Clinton – who was a divisive and polarising figure. Biden’s ahead of Clinton among white males of college and non-college educational levels, including in battleground states. If the election were today, Trump would most likely lose, according to detailed analysis by The Economist. Among voters over 65 years of age, private GOP polls show Trump’s lead slipping, especially in key swing states. Over 80% of all COVID-19 deaths in the US are among this age group.

With healthcare a key election issue, even before the COVID-19 crisis, and Biden’s leftward shift under political pressure from Senator Bernie Sanders, young voters may yet turnout more strongly for Biden this time.

And four years of Trump in office means he is no longer an outsider; he has an impeachable record to defend – and deepening pandemic, economic, political crises to manage.

In ‘deconstructing the administrative state,’ as Steve Bannon declared at a C-PAC conference in 2017, Trump may well have won friends opposed to regulation, expertise, experience and science. That combination of pathologies has directly impacted Trump’s failures to unify and lead the US against the coronavirus.

But the act of bringing Bannon into the re-election campaign and, in so doing, re-legitimising him as a major political player, may also be seen as yet another in a long series of signs indicating the gradual deconstruction of the Trump presidency itself – and a further downward spiralling of what increasingly resembles a failed state.