Cornell University analysed over 3.8 crore media articles related to misinformation on COVID-19 and identified the US president as 'likely the largest driver of the COVID-19 misinformation “infodemic”'. 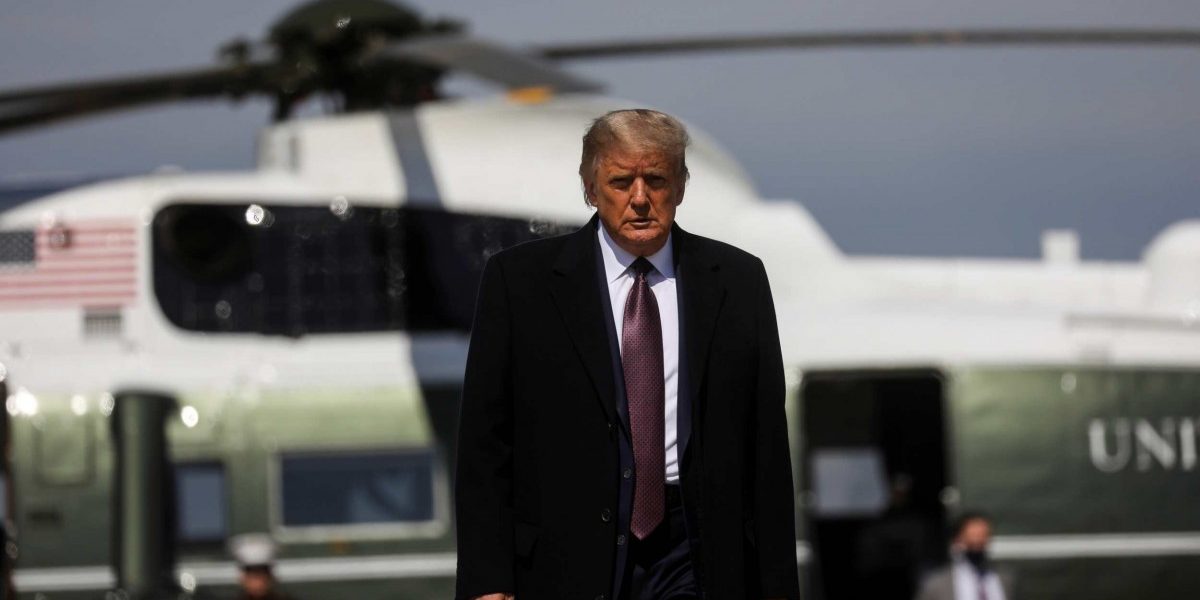 US President Donald Trump walks from Marine One to board Air Force One as he departs Washington on campaign travel to New Jersey at Joint Base Andrews, Maryland, US, October 1, 2020. Photo: Reuters/Leah Millis

New Delhi: The astonishing first key finding of a study by the Ithaca, New York-based Cornell University says United States President Donald Trump was “likely the largest driver of the COVID-19 misinformation “infodemic””. The study said that not only did “Trump mentions [comprise] 37.9% of the overall misinformation conversation”, but that this was “well ahead of any other topics”.

The term “infodemic” was introduced by World Health Organisation director-general Tedros Adhanom Ghebreyesus while criticising the spread of false information about the pandemic, including about miracle cures and COVID-19 being a bioweapon that was released or somehow escaped from a laboratory in Wuhan, China, where the first COVID-19 cases emerged in late 2019.

The US president has repeatedly tried to tie the spread of the coronavirus – which he insists on referring to as ‘the China virus’ – to China to deflect blame from his administration’s handling of the pandemic, which made the US the country with the maximum number of cases in the world (over 7.2 million on October 2). China had just 90,000 cases on the same day. Trump is 32 days away from facing the US general election.

The second of the Cornell study’s three key findings places more responsibility for spreading misinformation at the US president’s door, saying that “a substantial proportion” of other misinformation “was also driven by the president’s comments”. Effectively, Donald Trump is mentioned in 48.2% of misinformation conversations about COVID-19 (see figure below). 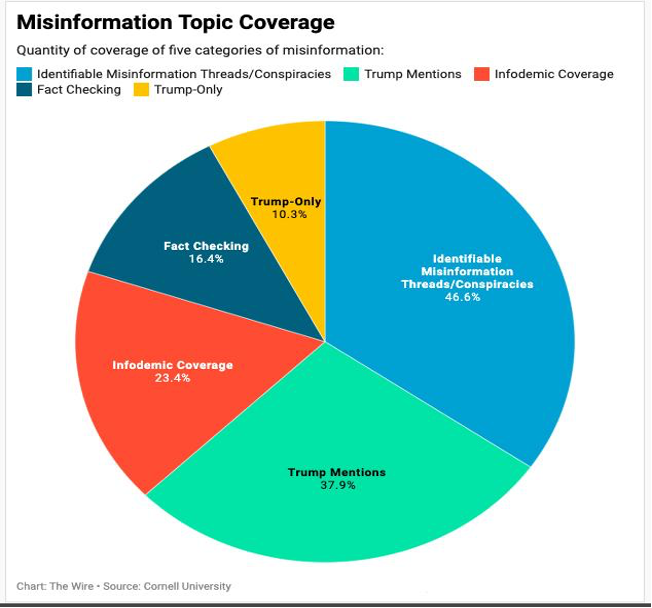 Cornell’s third and last key finding points a finger at the media for conveying COVID-19 misinformation “without question or correction”, because only a meagre 16.4% of the misinformation coverage was ““fact-checking” in nature”.

Watch: ‘I’m Optimistic About Fall in Active Cases, but It’s Clear Lockdown Was a Terrible Mistake’

The university identified and examined over 3.8 crore articles related to the pandemic published in English-language media across the globe over five months, starting near the beginning of the pandemic on January 1 and ending on May 26. It identified just under 3% as carrying coronavirus misinformation. This equals a shocking 11 lakh articles contributing to the coronavirus infodemic carried in English media publications alone, worldwide.

Cornell identified 11 main conspiracy theories or misinformation sub-topics about the pandemic, and ranked these in order of frequency in discussion (see figure below). 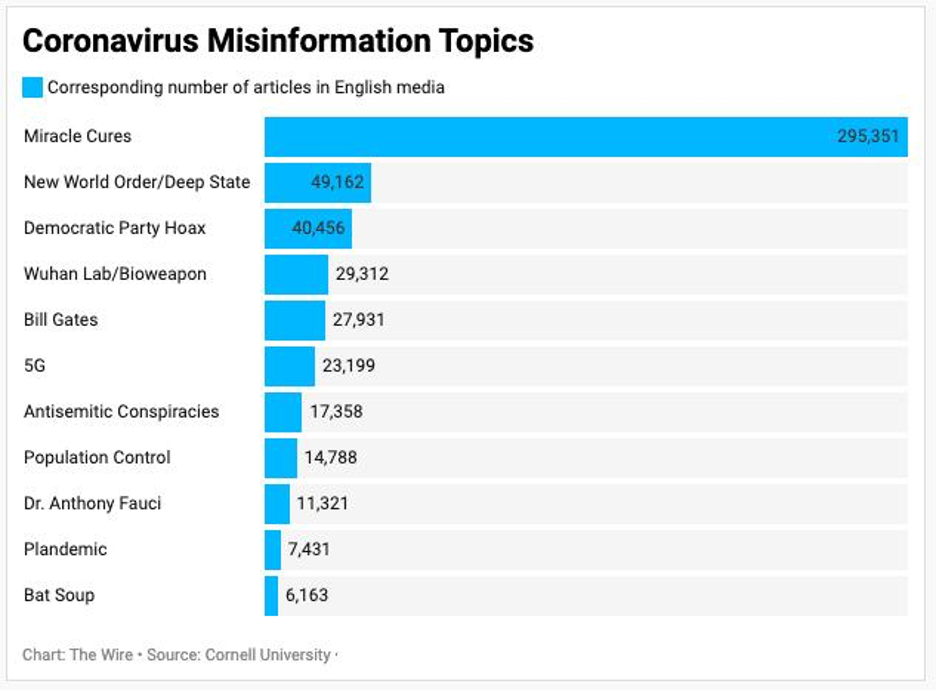 Discussions on miracle cures ranked as the number one misinformation topic. There are no cures for the novel coronavirus as of October 2, 2020, but plenty have tried to advertise some. Such as when India’s AYUSH ministry recommended on March 6 that coronavirus patients take homeopathic drug Arsenicum album 30C “daily once in empty stomach [sic] for three days”. Unfortunately, AYUSH minister Sripad Yesso Naik himself contracted the coronavirus in August. An even more dangerous ‘cure’ was suggested by Trump, when he wondered at a press conference whether injecting bleach and disinfectants could kill the virus. The president later claimed he was being sarcastic.

Other conspiracy theories uncovered by the Cornell Study include the ‘Democratic Party Hoax’, a claim eagerly pushed by President Trump’s son Eric that the Democratic Party rival to Trump’s own Republican party, had manufactured the COVID-19 pandemic to bring the president down during his impeachment trial.

Another widely spread theory claims that Microsoft founder and philanthropist Bill Gates wants to use COVID-19 vaccines, some of which his foundation is funding, to embed microchips in people to control their actions.

Then there is the 5G/COVID-19 conspiracy theory. Believers claim 5G, or 5th generation mobile network technology, degrades the immune system. Chinese phone-maker Huawei has produced the equipment for much of the United Kingdom’s 5G network. The controversy exploded after 5G towers were vandalised in the UK. The Journal for Medical Internet Research highlighted the role of social media platforms in aiding the spread of misinformation, after the #5GCoronavirus hashtag trended for a week starting March 27 in the UK.

Cornell identified US National Institute of Allergy and Infectious Diseases director Anthony Fauci, who has often been at odds with his boss, the US president, when it comes to statements on the coronavirus, as becoming a topic of misinformation early in April. Fauci has become increasingly popular in the US with his insistence on science leading the response to the virus, a popularity which has irritated the increasingly unpopular Trump. Conspiracy theorists claim Fauci has exaggerated the number of deaths from COVID-19, or accused him of “being a beneficiary of pharmaceutical efforts to find treatments and a vaccine”, says the study.

“Plandemic” has also become a term popularly used by conspiracy theorists after an eponymous 24-minute “pseudo-documentary” was uploaded on YouTube on May 4. The video made “numerous false claims” about the virus and was eventually removed.

The study makes clear the imperative for governments and international organisations to combat coronavirus misinformation, pointing out that the WHO has said that the ““infodemic” of misinformation is undermining efforts to combat the ongoing COVID-19 pandemic”.

It concludes that “if people are misled by unscientific and unsubstantiated claims about the disease”, such as the 11 deadly conspiracy theories identified, they may harm themselves by attempting to take so-called ‘miracle cures’, or “be less likely to observe official guidance”, such as taking a vaccine for the coronavirus once one or more of many vaccine candidates being developed is approved.