Most of the claims, of course, are as misleading as the statements Trump himself has made about coronavirus over the past eight months. 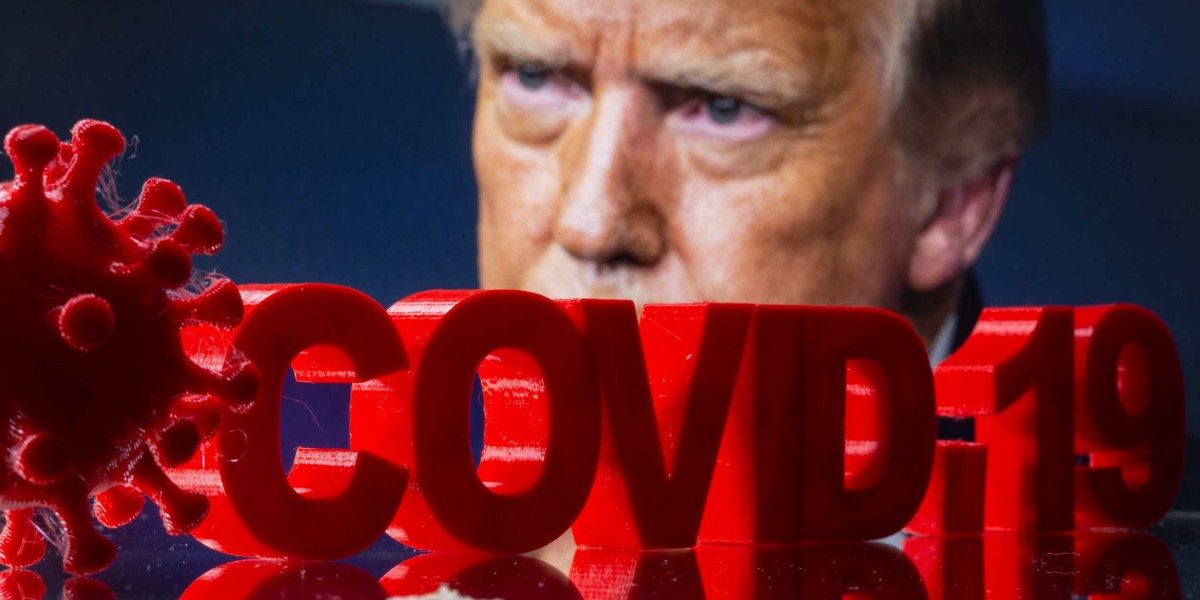 A 3D printed COVID-19 sign and the coronavirus model are seen in front of a displayed image of U.S. President Donald Trump in this picture illustration taken October 3, 2020. Illustration: Reuters/Dado Ruvic

New Delhi: After news broke in the wee hours of October 2 that United States President Donald Trump and his wife Melania Trump had tested positive for COVID-19, social media was quickly awash with conspiracy theories from both right- and left-wing users. Throughout October 2, ‘hoax’ trended on US Twitter. Most of the claims, of course, are as misleading as the statements Trump himself has made about coronavirus over the past eight months.

That the president is clearly symptomatic, having now been hospitalised at Walter Reed National Military Medical Center in Bethesda, is unlikely to calm the hoaxers, given the secrecy surrounding Trump’s past health check-up at the same military-run hospital. In fact, this was ‘predicted’ before Trump even fell ill. And if you think it’s only ‘losers’ and ‘suckers’ making these kinds of posts, the distrust goes much ‘higher’. Here, follow some of the ‘standouts’.

There are lakhs of posts about this but the most prominent among those claiming Trump was faking his coronavirus-positive diagnosis is left-wing activist and documentary film-maker Michael Moore. On his Facebook page on October 2, Moore claimed, “There is one absolute truth about Trump: He is a consistent, absolute, unrelenting, fearless, and professional liar.… Trump has a history of lying about his health… He may have it. But it’s also possible he’s lying. That’s just a fact.”

Moore went on to claim that Trump badly needed to change the conversation after a string of bad press, particular about the president’s tax returns, and may use his illness to “push for delaying/postponing the election” – something which by even Moore’s admission is not possible under the US constitution – or use his illness as an excuse for losing.

Others on Twitter variously claimed the president is faking his diagnosis to “milk quarantine for all it’s worth” to improve his favourability ratings, or avoid facing Joe Biden in another presidential election debate.

One US citizen who was ‘awoken in 2016’ claimed “…I think he didn’t test positive and just said so. He will then show miraculous “recovery” to say, “See? Nothing to it!” Or take Hydroxychloraquine [sic] to boost sales…”

But the IgNobel award for science must go to John Cammo, who predicted a whole two weeks before Trump tested positive that “Trump’s October surprise will be the announcement of “his infection.” Fake, but quite dramatic…. Then, 14 days later, Trump will emerge, 100% cured by hydroxychloroquine.”

The blame for these claims should probably go to Trump, who has regularly promoted the drug and said he had used it himself.

To be fair to the following fine people, this conspiracy theory was first pushed by Trump’s own former lawyer and fixer Michael Cohen, who claimed earlier in September that Trump would “arrange to be federally indicted”, then pardon himself if he loses the presidential election. This of course lit many fires online after the president fell ill.

Except, there are no convictions as yet for which a presumed President Pence can pardon Trump. Remember what Cohen said?

4. Trump purposely got infected so that he can grandly announce a new coronavirus vaccine just before the election

This theory has gained a lot more hot air after presidential debate moderator Chris Wallace revealed that President Trump arrived too late to the September 29 debate to get tested and co-hosts Cleveland Clinic and Case Western Reserve University decided to use “the honour system”, meaning they allowed people arriving late from both campaigns to claim that they had already tested negative. While it is indeed fascinating that they decided to believe a man who has repeatedly spread misinformation about the coronavirus, there is a big difference between reckless behaviour and intentionally endangering someone.

Also read: How Hindutva Politics in the Indian Diaspora Could Help Trump in Texas

@mets_therapy: ‘Conspiracy Theory: Maybe there’s a new radical middle that was trying to infect both Trump and Biden at the debate.’