With the World on Edge, So Much Is at Stake

This is not the time for geopolitical jousting or the drawing of swords. 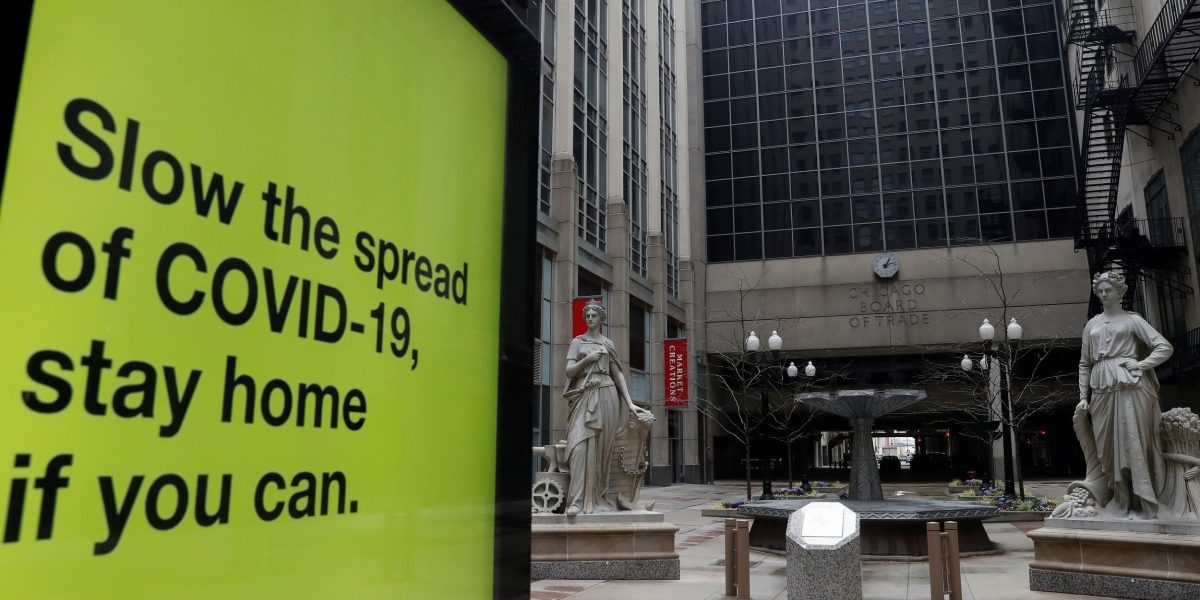 A sign warning of the spread of the coronavirus disease (COVID-19) is seen in front of the closed Chicago Board of Trade in Chicago, Illinois, US, April 23, 2020. Photo: Reuters/Shannon Stapleton

“I no longer guess a future.
And do not know how we end
nor where.

Though I know a story about maps, for you.”

The coronavirus pandemic that every part of the world is now the victim of comes at a period in global history when the post-Cold War world order, dominated by the United States, was already being shaken at the foundations.

The mutual attrition between China and the US is manifest in numerous arenas, economic and strategic; no longer is the US the ascendant presence driving the destiny of the modern world; globalisation had generated a train of discontents, inequality in human society had grown to worrisome levels; and the victory of  democracy that Francis Fukuyama suggested was the end of history has receded with the emergence of nativist nationalism, populism and distrust of the outsider, the immigrant, the ‘other’.

Our world today is interconnected and at the same time disconnected. Multiple pathways converge but also diverge. Why is there so much dissatisfaction with the world as we see it today? Greater levels of international integration have also produced domestic disintegration – disintegration of livelihoods, local communities and homegrown economic networks.

A populist backlash was inevitable. The outsider, the immigrant, the refugee, the religious minority became the enemy, the target of fears and insecurities. This dislocation is multiplied several times in the period we are going through today during the coronavirus pandemic. And there is no golden sky after the storm. We are on the verge of a figurative war of many colliding worlds.

Multilateralism is another facet of globalisation – almost a twin. Even prior to the pandemic, multilateralism was seen as entering a dark phase. The pandemic is the latest threat. President Emmanuel Macron of France calls it an anthropological threat. He also concedes that multilateralism came under threat because it was submissive to the “hegemony of the powerful”.

But can we abandon multilateralism?  It has a basic grammar that should rightfully underwrite global connectivity and interaction on health, biodiversity, trade and economic cooperation even if we cannot ignore the elements of sovereignty and strategic autonomy that are the preserve of nation states.

Also read: As China ‘Trumps’ US in Coronavirus Response, Global Power Game is Going Its Way Too

The US, typified for long as the leader of the democratic world, is suffering from a big crisis of polarisation within. Fukuyama feels American democracy has been decaying for a generation, affected adversely over time by a thousand cuts, with the public space being captured by several interest groups and lobbies, and with democratic checks and balances are eroded. A significant section of the population sees progress as having abandoned them, they blame liberal elites. Identity politics has raised its head, immigration becomes an issue, hostility and conspiracy theories become the order of the day.

How will the  pandemic affect the world order? Analysts call this a G-zero world where there is a power vacuum, a leadership deficit. The US seems reluctant to provide world leadership. And China, the other world power, is still to get there. But China is exploiting opportunities, trying to push its concept of a Community of Shared Future for Mankind, even if its leadership is at times “diffident” as The Economist recently termed it.

China’s early handling of the coronavirus outbreak in Wuhan left much to be desired regardless of the later steps it took to control the situation. Its government suppressed news, opinion and scientific data on the disease with tragic implications for the rest of the country and the world. Can China legitimately claim to be a global influencer given such a clumsy and flat-footed and fumbling response?

But at the same time,  the incapacities inherent in the US handling of the coronavirus crisis have damaged  American interests both on account of lives lost and wounds to the image of a country which was always seen as the first responder in such situations around the world, not just within its own borders.

Strong adversarial lines have been drawn between China and the US in recent years, particularly during the lifespan of the Donald Trump administration. The pandemic and its aftermath will only deepen these tensions. Interdependence between the two countries will fray as trust further diminishes and as their economies decouple. The images of Nixon in China will pass into legend, the stuff that operas are made of and not how diplomatic détente is played out.

Anti-China rhetoric and tactical moves will resonate with significant sections of the electorate in the presidential election year. Trump operates with agility in this space. The Chinese, now that the virus situation has eased within the country, have launched a medical and health diplomacy offensive across the world, coupled with megaphone propaganda about the gifts they come bearing for the world as an expression of their ‘do good’ benevolence.

In a world where American leadership is absent, smaller countries may slip into the sphere of Chinese power and influence or at least hedge towards them, as Ian Bremmer recently observed – their choices are limited. And the fact that China has resumed manufacturing, that it will command the supply chains (at least till other countries create their own outside the Chinese orbit) will be to the country’s advantage.

Ideally, given the severity of the pandemic situation, the US and China should cooperate. Organisations like the World Health Organisation cannot be the target of blame-mongering at this time. We need the WHO if we are to come up with sensible strategies to combat the pandemic and to develop global protocols for mitigation, treatment, and prevention of the disease as also future such biological threats. Neither China nor the US should do anything that circumscribes the effectiveness of the WHO or curb its ability to deliver on the global public health goals that constitute its mandate. Today, more than ever, multilateral international cooperation built on humility and determination as Mr Macron puts it, is a necessity to combat the pandemic that threatens humanity.

The pandemic will not end soon, according to all available indications. This is not the time for geopolitical jousting or the drawing of swords. As for India, our foreign policy choices should not be constrained in a manner that draws us irrevocably into taking sides in the many tensions and confrontations that arise between the US and China. The multi-dexterous foreign policy that is called for will test our skills in a post-pandemic world.

Our priorities should be the resuscitation of our economy, to revive our development momentum, address the loss of livelihoods, the interests of our workers, ensure internal stability,  and further consolidate our democratic space. The world will watch how we leverage our influence and diplomatic skills with our immediate neighbourhood, manage the relationship with China, how we create a middle ground in an entropic world that is polarised, that is growing increasingly insular and in danger of losing the core values that hold humanity together.

What is certain is that the world will not be the same, a reversion to business-as-usual will not happen, because we have been hit by a crisis of a sort we have never encountered before, an anthropological threat that throws all previous linear strategic calculations off course. Business, society and politics will be affected. When that post-pandemic world dawns, it is only pragmatic diplomacy and a clear, focused conception of the domestic and external  priorities that the country must safeguard and ensure, as well as an enduring trust in multilateralism, that can help us negotiate the post-trauma world that we will be faced with.

Nirupama Rao is a former Foreign Secretary, Ambassador to China and the United States.