Sri Lanka has asked Beijing to defer the arrival of the Chinese space and satellite tracking research vessel 'Yuan Wang 5'. 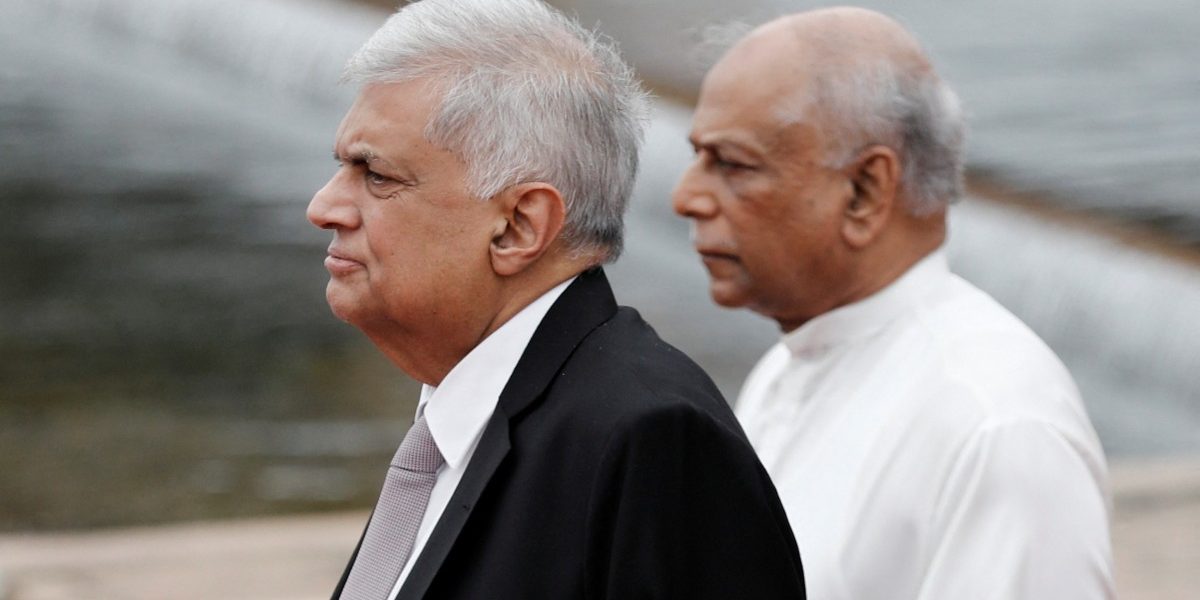 Sri Lanka's President Ranil Wickremesinghe and Prime Minister Dinesh Gunawardena look on after attending the inauguration of a new session of parliament and the first policy statement by Wickremesinghe, amid the country's economic crisis, in Colombo, Sri Lanka August 3, 2022. Photo: Reuters/ Dinuka Liyanawatte

New Delhi: Riled by Sri Lanka’s request to delay the planned docking of a high-tech Chinese research vessel at the strategic Hambantota Port, China on August 8 took a dig at India, saying it was “completely unjustified” for certain countries to cite the so-called “security concerns” to pressure Colombo and “grossly interfere” in its internal affairs.

According to reports from Colombo, Sri Lanka has asked Beijing to defer the arrival of the Chinese space and satellite tracking research vessel ‘Yuan Wang 5’ which was scheduled to dock at the Hambantota Port from August 11 to 17 due to security concerns expressed by India.

Responding to the reports, Chinese Foreign Ministry spokesman Wang Wenbin told a media briefing here that Beijing has taken note of the reports and asserted that Sri Lanka is a sovereign country. It has the right to develop relations with other countries based on its development interests .

To have normal cooperation is the independent choice made by our two countries. It serves the shared interests of both sides and does not target any third party. It is completely unjustified for certain countries to cite the so-called security concerns to pressure Sri Lanka, he said.

“As Sri Lanka grapples with economic and political difficulties, to grossly interfere in Sri Lanka’s normal exchange and cooperation with other countries is to exploit its vulnerability, which is morally irresponsible and against the basic norms governing international relations, Wang said in updated comments posted on the MFA website.

“We urge the relevant parties to see China’s marine scientific research activities in a rational light and stop disrupting normal exchange and cooperation between China and Sri Lanka, he said.

Sri Lanka is a transportation hub in the Indian Ocean. Scientific research vessels from various countries including China have made port calls in Sri Lanka for replenishment, Wang said.

China always exercises freedom of the high seas in accordance with law and fully respects coastal countries’ jurisdiction over scientific research activities in waters under their jurisdiction, he said.

Reports from Colombo on Sunday said China’s embassy in the country sought an urgent meeting with senior Sri Lankan authorities after Colombo sought deferment in the planned docking of the research vessel.

On July 12, amidst the political turmoil in Sri Lanka, the previous government approved the Chinese vessel’s docking at the Hambantota Port.

The Chinese vessel was expected to dock at the Sri Lankan port for “refuelling and replenishment’ and to conduct satellite control and research tracking in the northwestern part of the Indian Ocean region through August and September.

The southern deep-sea port of Hambantota is considered strategically important for its location. The port, located in the hometown of the Rajapaksa family, has been developed largely with Chinese loans.

The ties between India and Sri Lanka came under strain after Colombo gave permission to a Chinese nuclear-powered submarine to dock in one of its ports in 2014.

China is the main creditor of Sri Lanka with investment in infrastructure. Debt restructuring of Chinese loans would be key to the island’s success in the ongoing talks with the International Monetary Fund for a bailout.

India, on the other hand, has been Sri Lanka’s lifeline in the ongoing economic crisis.

India has been at the forefront of extending economic assistance of nearly USD 4 billion to Sri Lanka during the year as the island nation is grappling with the worst economic crisis since independence in 1948.

As the new Sri Lankan president looks at pulling the country out of its economic crisis, India has said that it will continue to assist the island nation and support its people in their quest for stability and prosperity.

Prime Minister Dinesh Gunawardena recently said Sri Lanka was looking forward to settling the issue of the vessel’s visit with an “approach of friendship”.

India’s concerns have been focused on Hambantota port in particular. In 2017, Colombo leased the southern port to China Merchant Port Holdings for 99 years, after Sri Lanka was unable to keep its loan repayment commitments, fanning fears over the potential use of the port for military purposes.