This is good news for India. Not so much for the US. 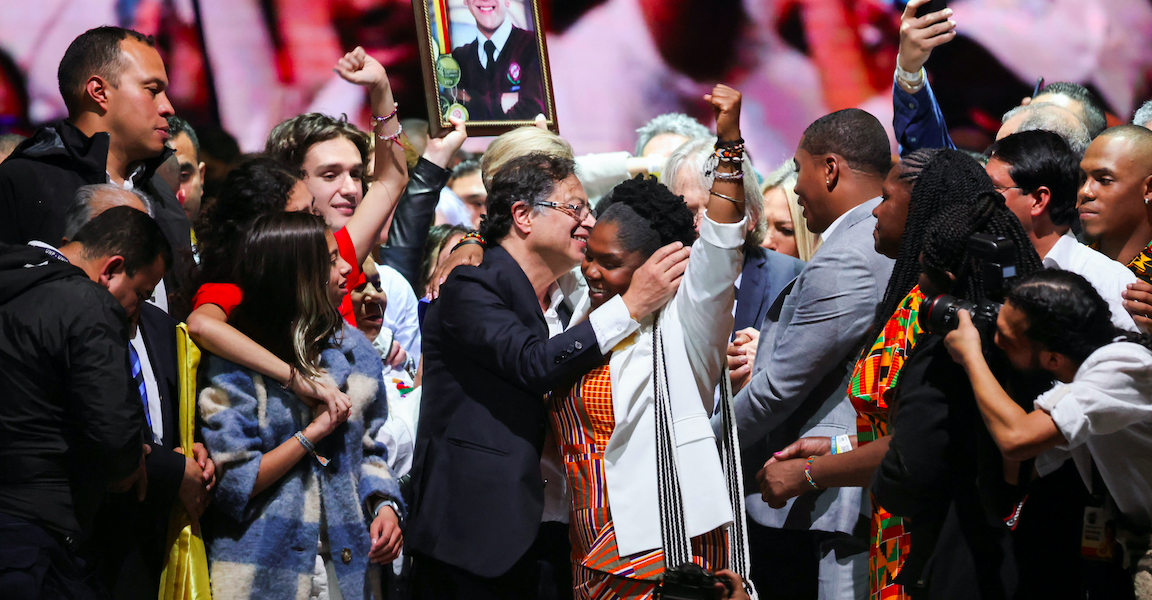 Colombian left-wing presidential candidate Gustavo Petro hugs his candidate for Vice-President Francia Marquez of the Historic Pact coalition after Petro's victory in the second round of the presidential election, at the Movistar Arena, in Bogota, Colombia June 19, 2022. Photo: Reuters/Luisa Gonzalez

Leftist Gustavo Petro won the presidential elections of Colombia held on Sunday, June 19. This is the first time in recent history that a Leftist has become President of Colombia, one of the most politically conservative societies in Latin America.

The Left had been marginalised in the last several decades because of the stigma attached to their perceived association with guerrilla groups who had waged wars against the governments. The end of the war with the FARC (Fuerzas Armadas Revolucionarias de Colombia or Revolutionary Armed Forces of Colombia) after the 2016 Peace Agreement has since then opened the space in the political discourse for left-wing movements and leaders.

Petro is not just a leftist. He was member of the M-19 guerrilla movement which he joined at the age of 17 as a student.

The M-19, formed by university students, activists and artists, sought to seize power through violence including holding hostage of the Supreme Court and the embassy of the Dominican Republic. In 1985, Petro was arrested by the army for the crime of illegal possession of arms. He was convicted and sentenced to 18 months in prison where he was tortured.

After his release, he went back to the university and completed studies in economics. M-19 demobilised in 1990 and transformed itself as a political party. Petro took to civilian politics since then and was elected as member of the Chamber of Deputies in the 1991 elections. Later he was elected as mayor of Bogota city and as senator. 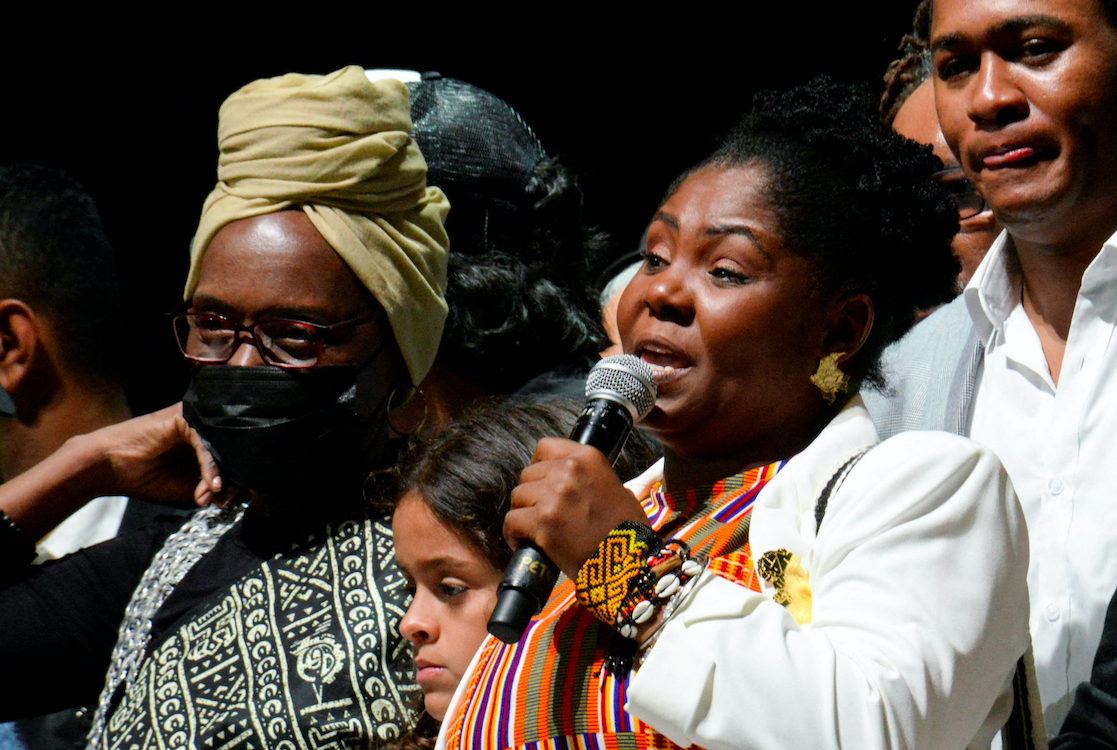 Petro’s vice presidential candidate Francia Marquez, has also made history as the first black woman to become vice president. She is an activist for causes such as social justice, environment, empowerment of women and equal rights for indigenous and people of African-origin, who form 10% of the population.

Born in a poor rural family, she became pregnant at 16, and went to work in the local gold mines and as domestic worker during her law studies. She had faced numerous death threats from the mining mafia during her environmental campaign.

Petro has an ambitious and progressive agenda to reduce poverty and inequality. He has proposed pension, tax, health and agricultural reforms. He has promised free university education and high taxes on the rich people, unproductive land and on the extractive industries. His agenda includes basic income for poor, single mothers and pensions for women who are stay-at-home mothers.

He has proposed creation of a Ministry of Equality under Vice-President Marquez to address the issues of disparity. As part of his environmental policy, Petro has proposed a ban on new oil projects and advocated moving Colombia away from dependence on fossil fuels. He has also pledged to fully implement the 2016 peace deal with FARC and seek talks with the still-active ELN (Ejército de Liberación Nacional or National Liberation Army) guerrillas.

Petro’s election was helped by widespread discontent of the people frustrated by decades of poverty and inequality under conservative leaders. The young and poor were at the forefront of last year’s protests which were crushed by heavy-handed security forces. Around 40% of the population are poor while the unemployment rate is above 11%.

Petro’s election confirms the recent trend of the anti-establishment wave in Latin America. His opponent Hernandez is not affiliated with any major political party and had rejected alliances. His main agenda was anti-corruption.

It is important to note that President Petro will not be able impose any extremist leftist agenda unilaterally and forcefully like Hugo Chavez or Daniel Ortega. The conservatives continue to have majority in the Congress and Petro’s own party does not have enough strength. This means that Petro has to seek compromise and show flexibility on his legislative proposals with the right wing and centrists. This is an effective check on Petro who tends to go overboard sometimes with his leftist rhetoric and is accused of arrogant and despotic tendencies at times.

Petro will be a challenge for the US which has counted Colombia as its strongest ally and part of its security policy in Latin America.

“Colombia is the keystone of US policy in Latin America and the Caribbean,” US President Joe Biden has said on more than one occasion. Last month, the US made Colombia as its 17th “Major Non-NATO Ally.”

The US has poured billions of dollars into Colombia in the past decades forcing the Colombian governments to give top priority to halt the production and supply of cocaine. The American pressure on the Colombian governments to extradite drug traffickers had provoked the cartels who had, in turn, unleashed more brutal violence in the country. The Americans had also forced the Colombian authorities to spray harmful chemicals on coca plantations causing anger among peasants whose livelihoods had been hurt.

But Petro will not be obediently implementing the American agenda unlike his predecessors. He proposes an update to the existing bilateral Free Trade Agreement with US to make it “more just.” He has proposed legalising marihuana and is against aerial fumigation and militarisation of coca eradication. He has promised to reassess the collaboration with the Americans on the drug issue. 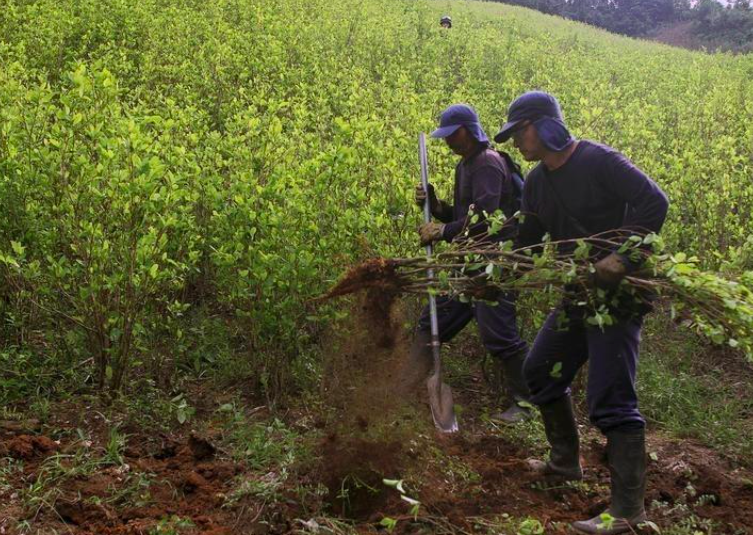 Workers hired by the Colombian government destroy coca plants during an eradication operation at a plantation in Yali, northeastern Antioquia in 2014. Photo: Reuters/Fredy Builes

Despite the killing of Pablo Escobar and extradition of other drug traffickers to US, the consumption of drugs in US has not reduced. Americans refuse to recognise the reality that drugs are yet another demand-driven multibillion dollar business in the US. $80 out of every $100 spent in the drug business stays within US leaving only 20% to external traffickers and coca growers.

The failure of the war on drugs has been recognised even within US where some 19 states have legalised recreational marijuana. Petro will add voice to the other Latin Americans who have been calling on the US to stop the war on drugs and seek other solutions including decriminalisation and legalisation. But the multibillion dollar US drug war industry is addicted to its profitable drug war business and is forcing the US government to continue the war on drugs.

Colombia has also been in the front line for the US war on the leftist government of Maduro and is the only South American country that is fully enforcing America’s policy of “maximum pressure” on President Maduro. Juan Guaidó, the American-anointed interim president of Venezuela has been operating mainly from Colombia. The mercenaries who made an attempt to invade and overthrow the Maduro government in 2020 launched their invasion from bases in Colombia. 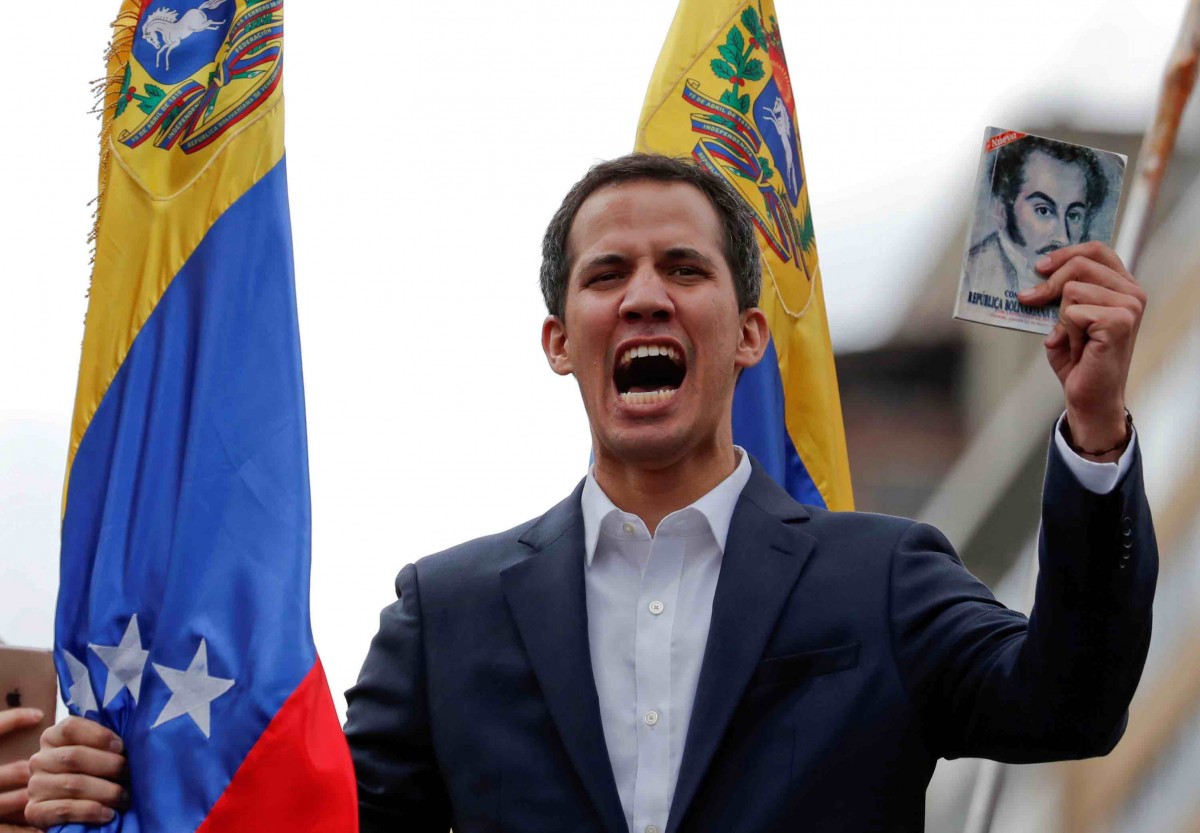 Petro will not allow his country to be used any longer for attacks against Venezuela. He will discontinue collaboration with the US’s efforts to destabilise and isolate Venezuela. He will also join the other leftist governments in recognising the Maduro government and in opposing the US policy of sanctions and isolation of Cuba and Nicaragua, besides Venezuela.

Petro’s ascent to power has confirmed the resurgence of the Pink Tide in Latin America.

Many Latin American leftists had won the presidential elections in the first decade of this century, riding on the wave of revolt against the neoliberalism and Washington Consensus imposed on the region and which had worsened poverty and inequality.

Iconic leaders like Brazil’s Lula (Luiz Inácio Lula da Silva), Venezuela’s Hugo Chavez and Ecuador’s Rafael Correa had challenged the hegemony of US. They had started integration of the region with formation of regional groups such as CELAC (Community of Latin American and Caribbean States) and UNASUR (Union of South American Nations) to acquire collective strength vis-à-vis
the US which had treated the region as its ‘ backyard’ and had destabilised democracies with support to rightwing military dictatorships.

But the Pink Tide of the first decade lost its momentum after the electoral setback to the left in some countries such as Brazil and Argentina as well as the collapse of Venezuela under the Chavista regime. But now the Left is on a comeback trail consequent to the excesses of extreme rightist Jair Bolsonaro (of Brazil) and the failure of other rightwing governments to deliver on their promises.

The Left has already come back to power in Argentina, Bolivia, Honduras and Chile. Even Mexico has elected its full-fledged leftist Lopez Obrador as president. He has discontinued the pro-American policies of his predecessors and boycotted the recent Summit of the Americas hosted by President Biden to show his opposition to the US policy of isolation of the leftist-ruled Cuba, Nicaragua and Venezuela.

In Brazil, Lula is expected to come back to power in the elections to be held in October this year. Bolsonaro is trailing Lula by double digits in the opinion polls. Latin America, which has the highest disparity among regions, needs leftist governments who give priority to tackle poverty and inequality.

Petro’s election and Lula’s expected victory will complete the Latin American circle of the left. This is the first time that the seven largest and most important Latin American countries with the biggest markets – Brazil (expectedly from January 1, 2023) Mexico, Argentina, Colombia, Chile, Peru and Venezuela – will all be ruled by leftist governments.

This is unprecedented in the history of the region. Even in the time of the first Pink Tide in the last decade, Colombia and Mexico were outliers with pro-US governments. This means that the US will become isolated in the Americas for the first time. This should hopefully make the Americans give up on their failed policies of interventions and devise a new constructive and positive agenda for the region. The Chinese are quietly increasing their clout in the region with billions of dollars of investment, credit and trade while the US has been relentlessly lecturing and bullying the region on democracy, human rights, migration, drug trafficking and corruption.

Colombia is the fourth largest trading partner of India in the region with $ 4.34 billion of trade last year. India’s exports were $ 1.38 billion and imports, $ 2.96 billion. For many years, Colombia was the third largest destination of India’s exports to Latin America, ahead of Argentina which just took over the third rank last year.

Colombia is also the second largest global market for Indian motorcycles with $ 309 million last year. Some years ago, Colombia was the number one destination. Indian motorcycle brands are market leaders in Colombia. Under President Petro’s agenda for inclusive development, India’s exports are likely to increase.

The resurgent Pink Tide in Latin America is good news for India since the leftist governments, in general, seek closer cooperation and partnership with India to address common developmental challenges in a democratic way. They are keen to import more Indian generic medicines to reduce the cost of health care too.

They invite Indian IT companies to open more software centres in the region to help with employment and skilling of their human resources. India’s success stories in poverty alleviation, affirmative actions for empowerment of underprivileged and emergence as an IT powerhouse resonate more with the leftist leaders.

It is time for India to intensify its engagement with the region which accounted for $ 19 billion of exports last year. There is scope to increase the exports to $ 30 billion in the next three to four years. Latin America has emerged as a source of energy and food (especially edible oil and pulses), fitting in with India’s strategic policy of diversification in energy and food security.

The leftist governments would be more willing to collaborate with India in the United Nations, World Trade Organisation and other multilateral fora in the spirit of south-south solidarity.