China has tested an advanced hypersonic fractional orbital bombardment system which will allow it to deploy nuclear weapons against the US and bypass the Pentagon's missile defence shield. 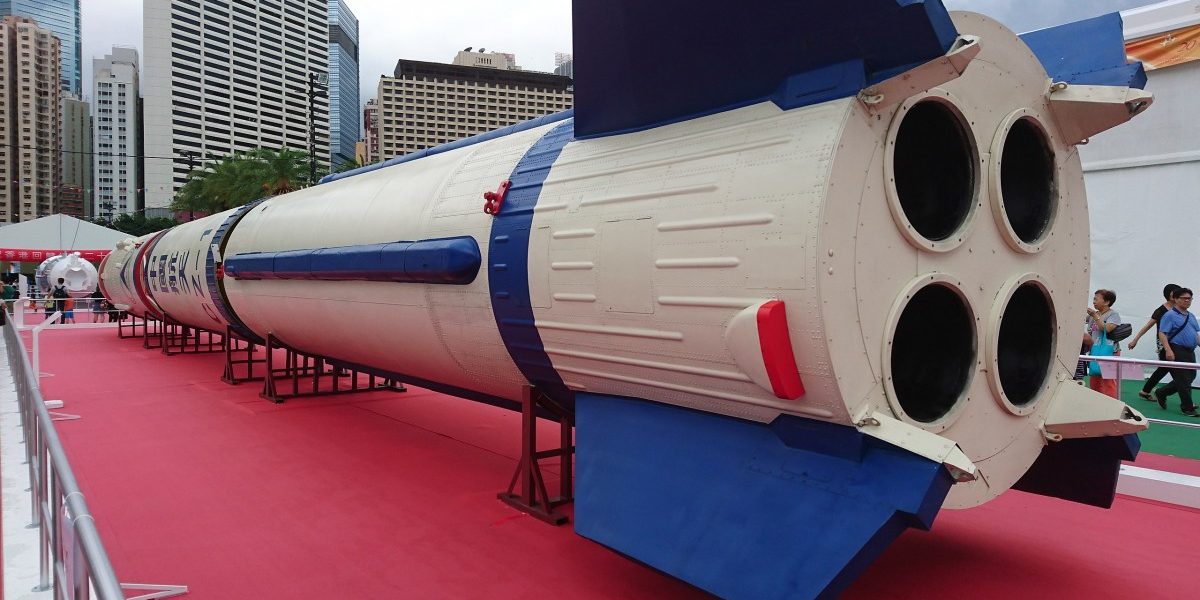 Financial Times reported that China is thought to have tested its FOBS weapon with a Long March rocket, whose engine is picture here. Photo: Ceeseven/Wikimedia Commons, CC BY-SA 4.0

Bengaluru: China’s decision to test an advanced hypersonic fractional orbital bombardment system (FOBS) in August this year – a capability the United States still does not have – has not just caught the US intelligence community by surprise but has demonstrated for the first time that the military technology gap between the two superpowers is smaller than the Pentagon has so far assumed.

Scientists and engineers in the erstwhile Soviet Union developed FOBS in the 1960s. It involves launching a nuclear weapon into lower low-Earth orbit – around 150 km – where it will stay as it floats above the planet, before de-orbiting back down over the intended target. The Soviets were motivated by the US’s then-formidable missile warning network, all of whose observation outposts were pointed north – since the shortest path of a missile launched from anywhere in the Soviet Union (during the Cold War) would likely have been in the northern hemisphere.

However, FOBS would allow a missile to be launched into a pole-to-pole orbit above Earth, fly up over the mainland US from the south, and wreak its destruction.

Fortunately the Soviets never built this weapon, thanks to the US upgrading its early-warning systems to include space-based surveillance for missile heat-signatures. This said, we know that many countries in the world – including the US and Russia – are attempting to build such a system today. But on October 17, the  Financial Times published a report that has set the cat among the intelligence-community pigeons: that China built and tested a FOBS in August this year.

According to the report, a missile China’s defence establishment tested attained a speed of 33,800 km/hr – more than 27-times the speed of sound in air – and circled the planet once before descending on a target in China, missing it by just around 40 km. The fact that the vehicle flew so fast makes this weapon a hypersonic FOBS, which would make it even harder to track and/or intercept.

“Hypersonic glide vehicles … fly at lower trajectories and can manoeuvre in flight, which makes them hard to track and destroy,” Taylor Fravel, a professor at the Massachusetts Institute of Technology and an expert on China’s nuclear weapons, told Financial Times.

However, missile experts have contended that in this day of increasing satellite use and ground and atmospheric sensors, FOBS may not be any more advantageous than the ‘conventional’ intercontinental ballistic missiles (ICBMs).

As their name suggests, ICBMs can be launched from one continent and strike a target on a distant one – just like FOBS – but they don’t enter orbit per se. Instead, ICBMs follow a parabolic trajectory, sometimes climbing to heights of 1,200 km, before descending on the target.

But Marco Langbroek, an expert on (among other things) space situational awareness, has written in light of the Financial Times report that while the US Space Force’s Space-Based Infrared System would still spot a FOBS launch, the FOBS might be able to evade the country’s Ballistic Missile Defence (BMD) system. That is, one of FOBS’s few remaining advantages is that it may be able to beat the BMD and strike targets within mainland US. This is why the Chinese test is expected to have spooked the US.

Fravel did tell the Financial Times that simply testing a missile doesn’t have to mean China has a functional hypersonic FOBS. But other, unnamed intelligence community officials quoted in the report have said just the fact that China has been able to test such a weapon should have jolted the US, which has underestimated the extent to which China has modernised its military before. As one unnamed official told the newspaper: “We have no idea how they did this.”

“It is meaningless to discuss the credibility of the FT report. But it is important to note the unstoppable trend that China is narrowing the gap with the US in some key military technologies as China is continuously developing its economic and technological strength. China doesn’t need to engage in an ‘arms race’ with the US – it is capable of weakening the US’ overall advantages over China by developing military power at its own pace.”

The test is also understood to be a statement that the US shouldn’t think it can attack China assuming that its BMD will protect it from retaliation. Langbroek added in the same article that the Chinese FOBS’s advantage over the BMD could persist “unless [the US] chooses to continue to ignore China with regard to BMD, as they did until now”. According to him, the US’s logical course of action now could be to extend the BMD’s coverage and install anti-satellite missiles to counter the FOBS threat.

Aside from the North American missile defence system, there is another major problem with using FOBS to deploy nuclear weapons: it violates the Outer Space Treaty (OST). The OST entered into force on October 10, 1967. India is one of the signatories to the treaty, and in fact courted condemnation against its controversial anti-satellite test in 2019 because the test violated the spirit of the OST, as did the ASATs by othe countries, including China. A functional FOBS, if designed to deliver a nuclear payload, would violate the OST on the same ground: for placing nuclear weapons in orbit.

However, as far as the US alone is concerned, it may not fight back with the OST as an argument against China’s plans. In early 2018, Russia’s president Vladimir Putin shared some details about weapons systems Russia was interested in, seemingly in an effort to provoke the US. One of the weapons was designated RS-28 Sarmat – a super-heavy ICBM reportedly capable of delivering multiple warheads to multiple targets.

Imagine an ICBM that has reached its peak altitude and is now descending over its target. But instead of striking a single point, it has multiple warheads that separate from the missile, fan out and strike multiple points. Such weapons are classified as multiple independently targettable reentry vehicles, or MIRVs.

According to analyst Taunton Paine, the US government didn’t object to the RS-28 on the OST’s grounds because it had argued in 1967 that a Soviet FOBS wouldn’t violate the OST. Why? In Paine’s words:

“… violation would need to entail space-based nuclear weapons, not ground-based systems that temporarily placed prohibited weapons into orbit. This interpretation owed more to the administration’s other needs – in particular, the need for Soviet cooperation to finalise the far more consequential Nuclear Non-proliferation Treaty – than to a close reading of the text or concern about space-based weapons.”

Later the same year, then defence secretary Robert McNamara also contended that a Soviet FOBS test hadn’t violated the OST because the weapon had de-orbited before completing a full orbit. In fact this is also how FOBS got its name: the ‘fractional’ is supposed to indicate that it doesn’t enter a full orbit.

But many experts, including Langbroek, have dismissed this argument of McNamara’s as an opportunistic technicality at best. The difference between entering orbit and being in orbit is trivial, plus, to echo Langbroek, the FOBS vehicle needs to deliberately de-orbit to begin a downward trajectory. McNamara’s other argument carried more weight – that the Soviet Union’s test didn’t include a nuclear warhead and therefore didn’t contravene the OST.

The same argument could apply to the new Chinese FOBS test, but there’s more to it than that. The demostration of Chinese military technology comes amidst rising tension on its borders – from Taiwan to India.

For four days from October 1, China flew fighter aircraft into Taiwan’s air defence identification zone, not so subtly asserting its claim to Taiwanese territory. The US and Canada responded by sailing the USS Dewey, a missile destroyer, and the HMCS Winnipeg, a frigate, through the Taiwan Strait – which separates China from Taiwan – on October 14-15. Two days later, the Financial Times reported that China had tested a hypersonic FOBS in August. What will the US do?