Containing the pro-democracy protests in Hong Kong has increasingly been a cause for Beijing's concern, so much so that it has bypassed the special administrative region's legislature. 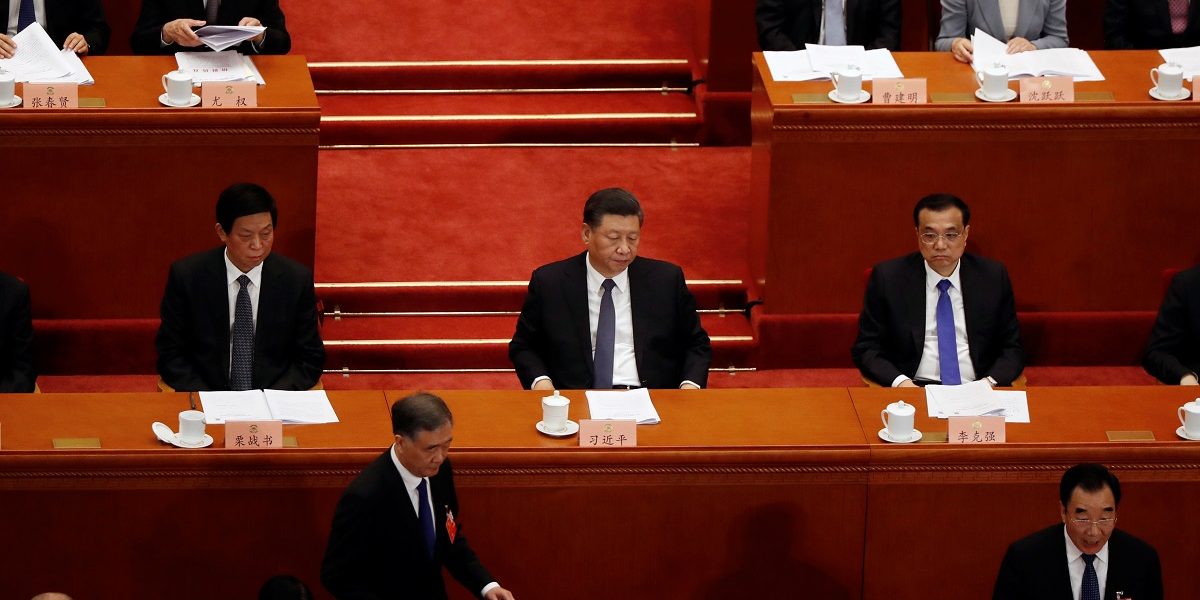 The Chinese Prime Minister Li Keqiang in his opening speech to the National Parliament on Friday noted that this was a time of ‘great uncertainty,’ and refrained, as is usual, from announcing a GDP target for the Chinese economy. However, the uncertain time did not prevent him from calling for a new national security law for Hong Kong, an Act that ignores the right of the Hong Kong Legislature.

The Chinese premier said, “We will establish sound legal systems and enforcement mechanisms for safeguarding national security in the two SARs, and see that the governments of the two regions fulfil their constitutional responsibilities.”

The special administrative regions (SAR) are Hong Kong and Macau. This announcement, with the ominous promise of fulfilling the constitutional responsibility of the regions, as if they have not been doing what they were constituted to, has been greeted with alarm in Hong Kong. The Chinese premier has gone against the Basic Law under which the territory is governed. In fact, Li did not even make a reference to the Basic Law, something that is usually done. The resolution can be rejected or modified, but the Chinese parliament is not known for doing such things, and the fact that it has been presented means that there is consensus behind this move. The Bill could become law as early as June, after the normal process of going through committees is carried out. 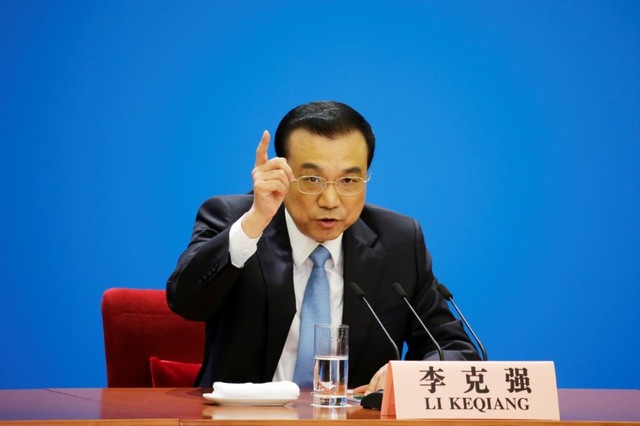 How to tackle the Hong Kong popular protests and the desire for a democratic government they represent has been a concern for Beijing. Even as it handles the ongoing pandemic, which has caused unprecedented economic disruption and will no doubt exacerbate existing tensions, the Chinese leadership has announced this controversial move. It has been greeted with international concern but Xi Jinping and the Communist Party of China (CPC) must have taken that into account.

The argument that Hong Kong is an integral part of China mobilises public opinion in the mainland, and the well organised online trolls will vociferously support the move. However, framing it as threatening China’s independence deftly sidesteps the real question of political participation and the demand for responsible government.

Also read: With the World on Edge, So Much Is at Stake

Governments, even democratic ones, across the world are using ‘national security’ to undermine democratic rights. The CPC, with its ‘democracy with Chinese characteristics’ rhetoric, has under the leadership of Xi worked assiduously to create a ‘harmonious society’ and the way it defines ‘national security’ clubs all opposition, peaceful and violent, and invites repression in a variety of ways. Critics can be silenced, sent for ‘re-education‘, exiled, or sent to prison. High tech surveillance and facial recognition softwares allow unprecedented ability to monitor and regulate. The government has even been working on giving citizens points for patriotism, low marks will exclude you from social services like buying tickets for trains. Regulation is not just confined to citizens on the mainland but covers all Chinese living abroad as well.

The Hong Kong protests have been cast as anti-national. But the protestors have not been questioning being part of China. The Occupy movement that began in March 2013 was for electoral reform. It grew because of the growing problems in education, housing policies and growing poverty. The attempt to pass a law that could potentially allow political prisoners to be extradited to China was met with massive opposition as the people of Hong Kong would then be subject to a different legal system.

The Basic Law is like a constitution that laid down the laws that would govern Hong Kong. It came into force in 1997, when Hong Kong was handed over to China. Hong Kong’s autonomy is guaranteed under the law, though over the years there have been changes. For instance, under Article 18, only national laws listed in Annex III, such as foreign affairs, defence and those that are related to matters outside the territory, can be applied to the territory.

Under Article 23 of the Basic Law, the territory must enact its own national security laws. The local government attempted this in 2003, under pressure from Beijing, but had to face widespread opposition. Some half a million people came out in opposition to the proposed national security law. It was felt that this would restrict freedom of speech. The government was forced to withdraw the Bill and finally Chief Executive of Hong Kong Carrie Lam conceded that a new national security law would be brought in only when there was support for the Bill.

The opposition to the extradition law has grown into a wider civil movement to protect liberties, bringing all sections of society together.

Despite the disruption, the fluid and highly mobile agitators have enjoyed widespread support. Beijing has been keeping a close and careful watch and only made threatening noises about a possible intervention. Now it seems to have decided to press on and enact a national security law that will bypass the Hong Kong legislature.

The announcement has been greeted with consternation and leaders of the democratic opposition, such as the legislator Dennis Kwok has said that ‘this is the end of Hong Kong’. Groups of demonstrators have come out and spoken out against the move though so far in small numbers. It seems unlikely that either side will back down. The protestors, because of the COVID-19 restrictions, have been low key but they have strong support in society. In elections last November, they won 17 out of 18 local districts. But they face difficult odds. Beijing has been painting the protesters as terrorists who wave ‘foreign flags’ and demand independence. Anti-national and anti-sedition laws have become a common tool to silence any democratic opposition.

Perhaps even if the pandemic had not happened, China would have taken steps to bring the Hong Kong movement under control. The example of India putting the state of Jammu and Kashmir under lockdown on August 5, 2019, diluting Article 370, and converting it into a union territory is before us. While not exactly the same, the arbitrary change in existing arrangements, the painting of opposition as anti-national, and the use of sedition against students and civil society activists, is similar. Perhaps, just as the J&K situation has been ignored, internationally and domestically, the Hong Kong protests may also be silenced.

But there are differences. Hong Kong is a major economic hub and the protestors have carved an image of a peaceful democratic protest. China is seen as authoritarian and repressive and the current pandemic has further tarnished China’s image. A lot will also depend on how industry and business respond to government policies in the coming days and months.

Economic growth in China is shrinking for the first time since the 1990s. And with rising unemployment, the government will be hard-pressed to meet its economic targets and deliver on its promises. The decision on Hong Kong may have been taken as a way to divert attention from this and other troubles.

How will the international community respond? The move has been condemned but the follow-up remains to be seen. The US is currently caught in battles on many fronts with China. Trade issues have been continuing, particularly from 2018, when the US imposed heavy tariffs on Chinese imports. The COVID-19 pandemic has led to a full blown war of words. The US blames China for what it says was a cover up in the early days of the virus being detected. Timely sharing of information in December and January would have saved countless lives, contained the spread and saved from the humanitarian and economic global disaster it faces today, the US argues.

US President Donald Trump even suggested that the virus was made in a military lab near the food market of Wuhan, the epicentre of the virus, and leaked accidentally. Scientists have dismissed the idea that it the virus is man-made, but the idea sells well to Trump’s’ local audience and to many around the world. Prejudices come to the fore in such times and in some places, Chinese people have been targeted as responsible for the virus. Trump has built on this prejudice to cover his own mishandling as well. The question of responsibility for the pandemic has become a football in the geo-strategic game. 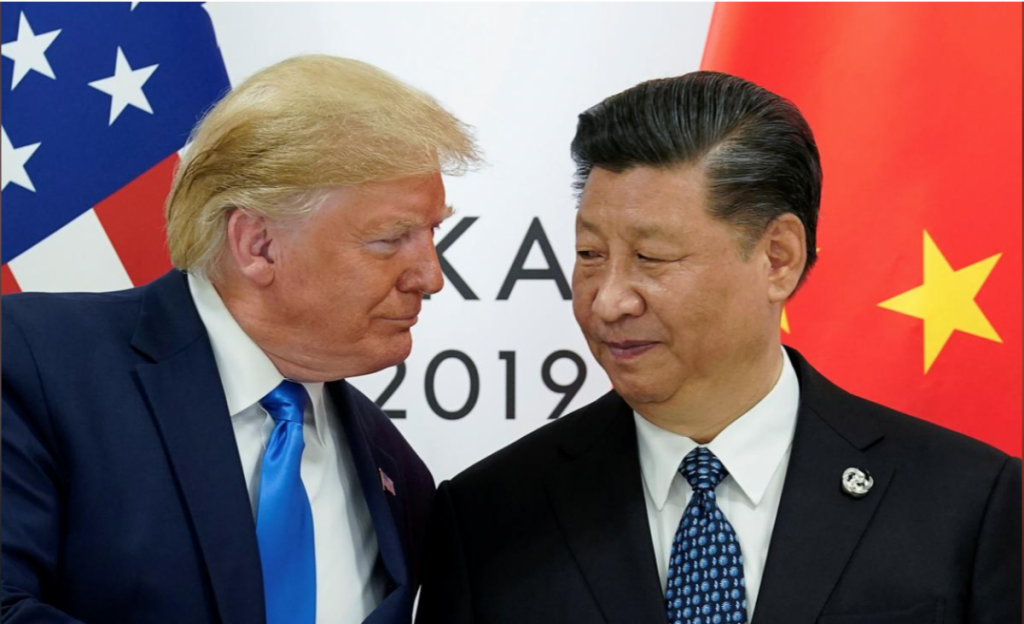 China has responded in kind, with aggressive rhetoric in the official media and through direct statements by its diplomats. This ‘wolf warrior’ diplomacy has ratcheted up the media virulence. ‘Wolf warriors’ refers to popular Chinese action movies about operations by special agents. China has projected these attempts by foreign media, or instances of anti-Chinese incidents as motivated by opposition to China’s growing importance in the world. They have sent highly publicised medical teams and masks to countries such as Italy as part of a charm offensive. On the other hand, they have threatened cutting trade and mocking critics and, in turn suggested that the virus may not have originated in Wuhan at all but in a US lab!

The pandemic has put the Chinese economy under severe strain, as it has that of other countries, but the danger that this may bring out the social tensions that so far remain under the surface but may come out to threaten the control of the CCP. This fear may underlie the move to clamp down on Hong Kong.

Xi Jinping, much like Trump is playing to his domestic audience and Hong Kong may turn out to be the sacrificial lamb on the altar of Chinese nationalism.