In Life, Canadian Sikh Ripudaman Malik Was an Enigma; His Killing Has Only Added to the Mystery

He was charged with – but later acquitted of – the crime of placing a bomb aboard an Air India flight in 1985 that killed over 300 people, a crime whose full dimensions remain a puzzle in Canada and India. 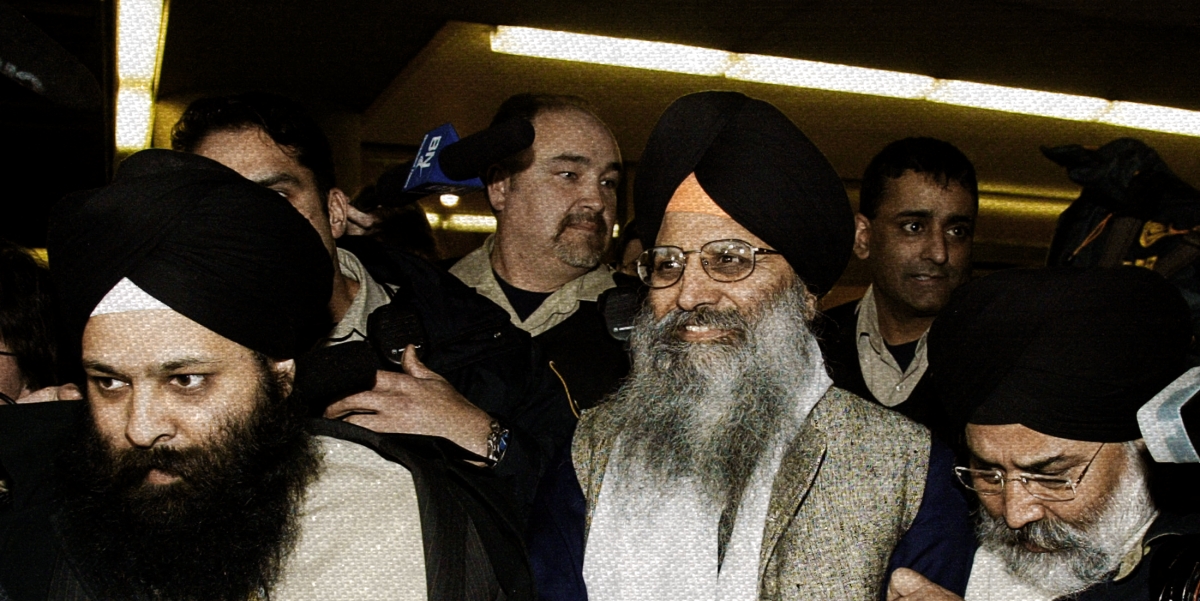 Sikh activist Ripudaman Singh Malik (C) smiles as he leaves a Vancouver court March 16, 2005, after being found not guilty in the 1985 bombing of an Air India flight off the Irish coast. Photo: Reuters/Lyle Stafford/File

Jalandhar: Ripudaman Singh Malik, the Sikh activist who was shot dead in Canada on July 14, was always embroiled in controversies and the Sikh diaspora in North America is deeply divided over his legacy.

The 75-year-old was accused of involvement in the terrorist bombing of  flight AI182 on June 23, 1985, which took the lives of 329 passengers and crew who were on board. However, he was acquitted by a Canadian court in 2005.

One of the deadliest attacks in the history of Canada, the Air India bombing took the lives of 268 Canadians, many of whom were of Indian origin, 24 Indian citizens and 27 British nationals. The flight was a Boeing 747 wide-bodied jumbo jet, christened Emperor Kanishka.

Malik and two others – Inderjit Singh Reyat and Ajaib Singh Bagri – were the main accused in the case. While Reyat was convicted – and released from jail in 2016 – Bagri was acquitted. All three were Canadian citizens.

A wealthy businessman, Ripudaman recently came to the limelight after he wrote a letter to Prime Minister Narendra Modi on January 17, 2022, a month before the Punjab assembly elections, praising him for taking initiatives to redress pending demands of the Sikh.

In the letter, he thanked Modi for removing the names of some Sikhs from the blacklist which prevented them from visiting India. He also accused certain “anti-India members” of the Sikh community of running an “orchestrated campaign” against Modi.

Back in Surrey in British Columbia, his praise for Modi prompted a section of Sikhs to accuse Ripudaman of treachery towards the Sikh ‘qaum‘.

On June 23, 1985, a bomb exploded aboard Air India 182 operating on the Montreal-London-Delhi-Bombay route. The bomb was placed in a suitcase – checked in by an unidentified man at Vancouver airport – and loaded on a Canadian Pacific flight to Toronto for transfer to AI 181, destined for Montreal. From there, it stayed on the aircraft, which was renumbered AI 182 for the flight to India.

Another bomb was checked in at Vancouver on a Canadian Pacific flight to Narita, Tokyo, which was meant to be transferred to Air India flight AI 310, destined for Bangkok and then India. This bomb exploded prematurely in the baggage handling room of Narita airport, killing two baggage handlers. Since the two bombings were related, they were known as the Kanishka bombings.

The bombings were carried out by the Sikh separatist group Babbar Khalsa in retaliation for Operation Blue Star, during which the Indian Army had stormed the Golden Temple in Amritsar in June 1984 to flush out militants led by Jarnail Singh Bhindranwale.

Ripudaman Singh Malik was closely associated with Talwinder Singh Parmar, who was the alleged mastermind of the Kanishka bombings. Parmar was killed by the Punjab Police in an encounter in 1992.

Surrey-based journalist Gurpreet Singh said that when he questioned Malik during an interview about giving funds to the Babbar Khalsa, he had said, “It wasn’t a banned organisation back then.”

Malik and Bagri were arrested in Vancouver in 2000. Reyat, who was a dual British-Canadian national, was arrested from Coventry in the UK. Reyat pleaded guilty to manslaughter and was sentenced to 15 years in jail for assembling the bombs which exploded on board AI 182 and at Narita airport.

On July 14, 2022 at 9:26 am (local time), the Royal Canadian Mounted Police (RCMP) responded to a report of a shooting in Surrey, British Columbia. By the time first responders attended the location, Malik was dead.

In its July 14 statement, Sergeant David Lee of the Surrey RCMP said the police are aware of Malik’s background and are working to determine the motive. “We can confirm that the shooting appears to be targeted and there is not believed to be any further risk to the public. Having occurred in a residential area, we are confident that witnesses exist who could help us further this investigation. We urge them to come forward immediately and without delay,” the statement said.

A burned vehicle was also located nearby, which is believed by investigators to be associated with the killing, the statement read.

Soon after the killing, Malik’s son, Jaspreet Singh Malik, said that although the media will always refer to him as someone charged with the Air India bombing, he was “wrongly charged and the court concluded there was no evidence against him”.

Born in Pakistan and raised in the Ferozepur district of Punjab, Malik initially went to the UK but soon moved to Canada. While his financial clout and social standing in the Sikh community grew, he remained embroiled in various controversies.

According to the Vancouver Sun, Dosanjh also did the legal work pro bono to help Ripudaman set up his first two charities, the Satnam Trust and the Satnam Education Society.

“He was a ganja-smoking hippie who had a ponytail and then he turned into an extremist warrior. It’s hard to explain”, Dosanjh said. “Something happened to him.”

The newspaper said Dosanjh believes Malik’s recent support of the Indian government which “he once reviled” could be the motive for the murder.

Speaking to The Wire from Surrey, senior journalist Gurpreet Singh Sahota of Chardi Kala newspaper said that the Punjabi diaspora, particularly the Sikhs, were divided about Ripudaman Singh.

“While the moderate Sikhs feel that he had some role in the Kanishka Bombing, Sikh hardliner groups suspected he was ‘pro-India’ – or that he was planted by Central agencies right from day one. This is the reason why the diaspora would not like to comment much,” he said.

On Malik’s business ventures, Sahota said he was known as a shrewd businessman. He ran the import and export business of the designer clothing brand Papillon. He also owned the Khalsa Credit Union with assets over Canadia $110 million, a banking and investment venture aimed at serving the Sikh community of British Columbia. He ran Khalsa Schools in Surrey and Abottsford under his Satnam Educational Society and “set up a vast network”. “It was also an open secret how he chucked out the founding members of these ventures and took entire control in his hand”, Sahota said.

Sahota added that initially, when Ripudaman came to Canada in 1972, he used to sell Sikh religious literature and items at the Gurdwara Khalsa Diwan Society on Ross Street, Vancouver. Later in 1986, he set up the Khalsa Credit Union with various stakeholders from the Sikh community.

Though Malik claimed to be a devout Sikh, the Akal Takht – the highest seat of Sikh religious power – prevented him from printing saroops (physical copies) of the Guru Granth Sahib at his printing press in August 2020.

A team of the Canada-based British Columbia Gurdwara Council had issued a notice to Malik and Balwant Singh Pandher for violating the 1998 edict by the Akal Takht forbidding any institution other than the Shiromani Gurdwara Parbandhak Committee or the Delhi Sikh Gurdwara Management Committee from publishing the Guru Granth Sahib.

Insisting that Malik not be made a ‘false hero’, Gurpreet Singh, the Surrey-based journalist, wrote: “I had a chance to meet his (Ripudaman’s) aunt and his college mates in his hometown of Ferozepur in Punjab, where I was posted as a staff reporter with The Tribune, when he was arrested in Canada in 2000. From what they told me, he wasn’t a very religious man before the ugly events of 1984 and was a changed person after that, like any ordinary Sikh.”

Gurpreet Singh also said, “A book titled Soft Target: The Real Story Behind the Air India Disaster on the Kanishka bombings written by Zuhair Kashmeri and Brian McAndrew has mentioned how Ripudaman was given an interest free loan of 1 million Canadian dollars by the State Bank of India, Surrey branch, Canada in 1985. However, this incident has always remained shrouded in mystery.” 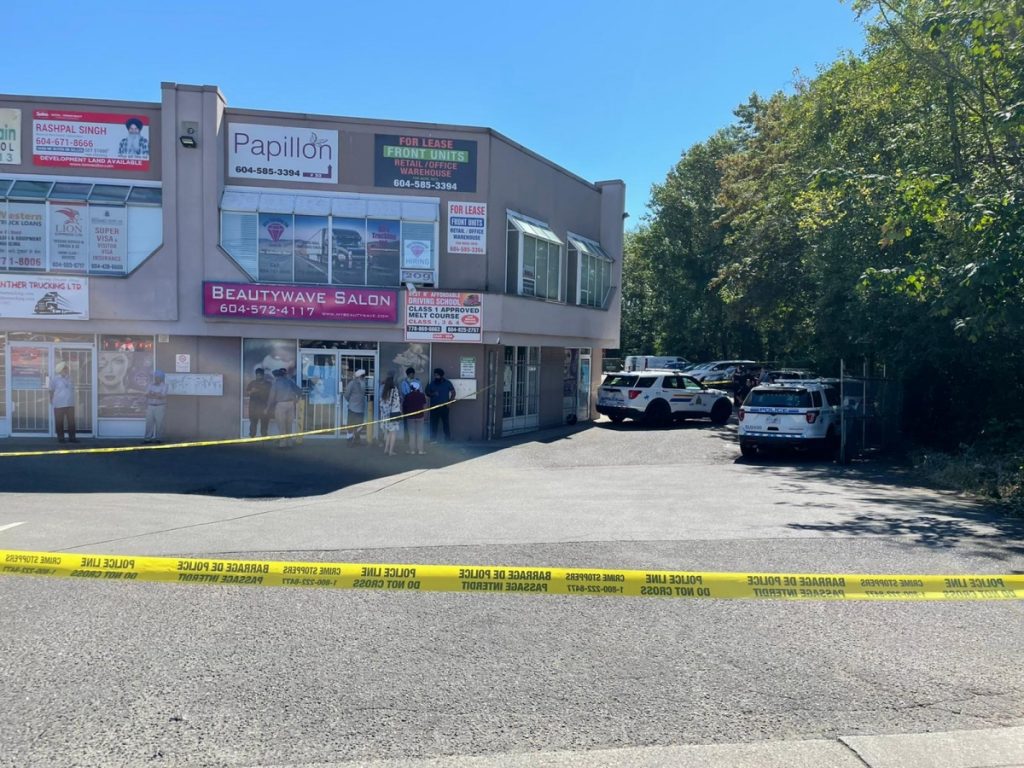 A view of Ripudaman Singh Malik’s store Papillon, situated in a shopping complex in Surrey, British Columbia, Canada, where he was shot dead on July 14 morning. Photo: By arrangement

Noted human rights lawyer, advocate Rajvinder Singh Bains from the Punjab Human Rights Organisation – who along with another lawyer Sarabjit Singh Verka had conducted an independent probe into the AI 182 case – told The Wire, “Despite our honest probe, trial papers, books, we presented as a witness a retired DSP of Punjab Police whom we took to Canada in 2007 to testify before the John Major Commission of Inquiry, and the confessional tape of kingpin Babbar Khalsa militant Talwinder Singh Parmar, the inquiry remained inconclusive. Neither the Indian Police nor the Canadian Police supported a fair investigation. We were disheartened.”

Bains said, “Talwinder certainly knew something crucial, that’s why he was killed. We met a large number of people, after which a murky picture emerged both at the official and unofficial level. While the DSP went missing in Canada, Talwinder Singh Parmar was killed in a police encounter in 1992.”

Bains says many suspect the Kanishka bomb was a multi-national ‘espionage game’ originally designed to undermine the influence of Sikh diaspora groups in Canada and the UK who were enraged post-Operation Blue Star.