Can the World Rescue Afghanistan from Mass Starvation, Bypassing the Taliban?

As per UN estimates nearly 23 million people are expected to face acute hunger in the coming months. Aid agencies are working on ways to distribute aid to Afghans without the involvement of the Taliban.

The fall of the Afghanistan government to the Taliban has presented the world with some stark choices. In recent weeks, the international community has raised alarm about the rapidly escalating humanitarian emergency in the country, calling for an influx of aid to reach millions of Afghans ahead of the winter.

In the meantime, the new Taliban regime has systematically disenfranchised the Afghan people and severely restricted their fundamental human rights – most notably those of women and girls to education.

In the short term, the failure of the Taliban and the international community to respond adequately to the country’s urgent humanitarian needs is likely to lead to famine.

Already, the UN estimates nearly half the country’s population – or about 23 million people – is facing acute hunger in the coming months. And 3.2 million children under the age of five are expected to suffer from acute malnutrition by the end of the year.

However, the long-term needs of the country cannot be so easily disentangled from these more acute concerns.

The international community must find a way to address the humanitarian emergency without emboldening the Taliban or neglecting its appalling human rights record. The threats of ethnic cleansing and gender apartheid are real – and will be just as detrimental to the future of the civilian population of Afghanistan.

Afghanistan was facing a major humanitarian crisis before the Taliban took control in August. Nearly half the population was living below the national poverty line last year. This was due to a combination of years of insurgent violence, a severe drought in parts of the country and the disruptions caused by the pandemic.

The crisis was accelerated by the fall of the government to Taliban. Afghanistan’s foreign assets – amounting to nearly US$9.5 billion (A$12.8 billion) – were immediately frozen in the United States. This led to a near-complete breakdown of the country’s financial and public sectors.

According to the International Monetary Fund, the country’s economy is expected to contract by 30% this year, further plunging people into poverty. The UN estimates 97% of Afghans could fall into poverty by mid-2022.

Concerns over allowing the Taliban to distribute aid

The Taliban has demanded recognition by the international community and the unfreezing of Afghanistan’s financial reserves held in the United States.

The European Union has also cut off its development funding to the country, while the IMF suspended access to more than US$400 million (A$540 million) in funds and the World Bank froze its disbursements of US$800 million (A$1.08 billion) in pledged aid this year.

Even with Afghanistan on the precipice of a humanitarian disaster, there are major concerns about whether emergency aid could be distributed in a transparent and impartial manner without strengthening the Taliban’s repressive and exclusionary regime. 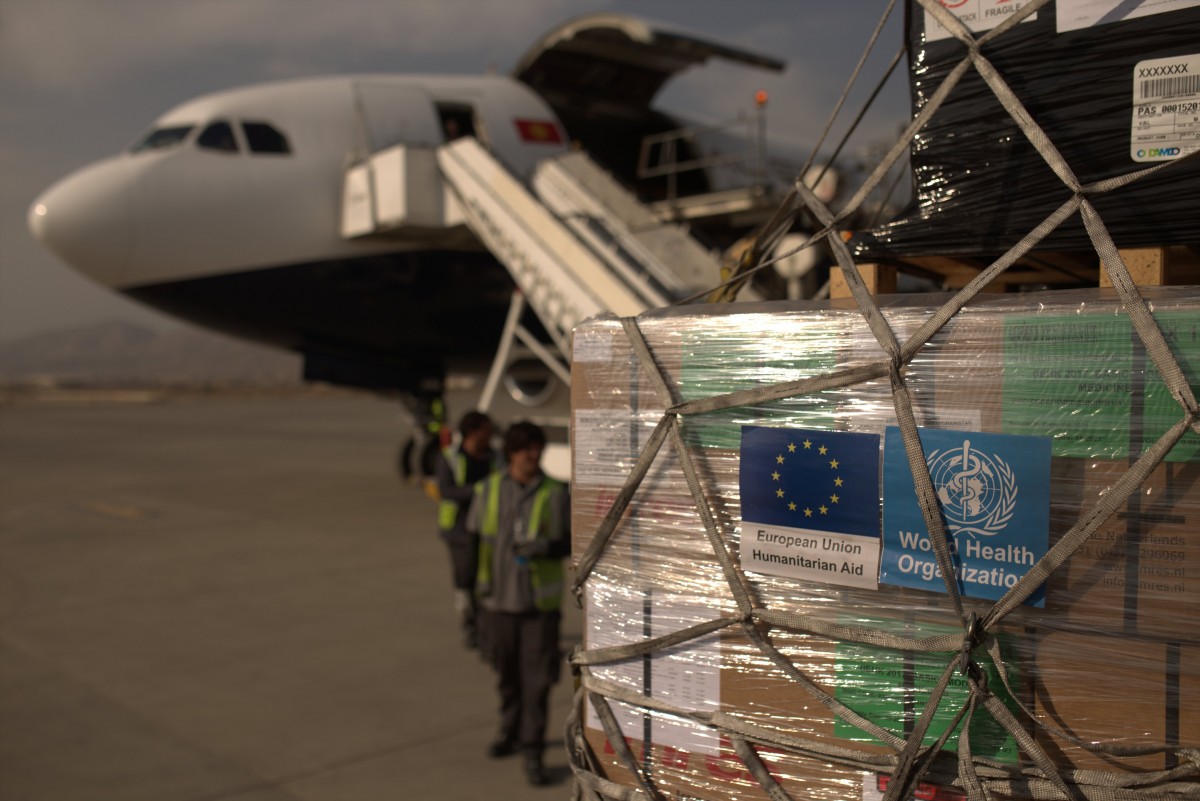 Contrary to its earlier promises of forming an “inclusive” government, the Taliban’s all-male caretaker cabinet is dominated by hardline and radical factions. The leader of the Haqqani militant network, Sirajuddin Haqqani, is the new minister of interior, while his uncle, Khalil Haqqani, is the minister for Afghan refugees.

As such, the IMF warns any funds going to Afghanistan may be used to finance terrorism and launder money.

The group’s aims for gender segregation, for instance, have effectively pushed women out of the workforce. Except for some essential roles in primary education and health care, most women have been forced out of public sector jobs, depriving countless families of their income. Millions of Afghan girls have also been banned from attending schools and universities.

These policies are affecting the most marginalised sections of society, which are also the most likely to be in greatest need of humanitarian assistance.

The Taliban’s severe restrictions on female aid workers have also limited the reach of aid to women across much of the country.

Furthermore, the Taliban is engaging in mass land grabs by forcibly evicting members of the Hazara minority from their homes and farms. Human Rights Watch says other people associated with the former government have also been targeted as a form of “collective punishment”.

Many observers have raised alarms that these incidents of mass dispossession, as well as gruesome attacks on the minority group by the local affiliate of the Islamic State, may amount to genocide.

There are also multiple reports of summary executions and torture of groups and individuals who supported the previous government across Afghanistan. In Panjshir province, where the Taliban faced fierce resistance, for instance, the group is accused of killing and torturing civilians.

What can be done to help?

In the short term, it is vital international donors respond to the humanitarian crisis by immediately providing life-saving support ahead of the long and cold winter. But the world must do this without offering the Taliban the recognition and legitimacy it desires, or allowing the group to directly control the funds.

The G20 countries are currently exploring ways to do this. It would require an agreement with the Taliban to allow aid to be delivered without going through the group’s direct authority, although it remains unclear how this would work.

As Italian Prime Minister Mario Draghi said last month, “It’s very hard to see how one can help the Afghan people […] without some sort of involvement of the Taliban government.”

While Taliban cooperation is necessary for delivering some emergency aid, donor countries and institutions must understand the limits of aid as a leverage in encouraging moderation.

UNICEF has negotiated an agreement with the Taliban in which the UN agency pays teachers’ salaries directly, without the funds going through Taliban-controlled institutions. If successful, this can potentially offer a model for other sectors to replicate, such as health and agriculture.

For the delivery of humanitarian assistance, donors and NGOs can also use many existing community networks. The European Union has pledged 1 billion euros (A$1.5 billion) in immediate aid to Afghanistan, with about half to be channelled through international organisations working in the country.

Western countries have made clear that any influx of cash would not lead to recognition of the Taliban government.

While the diplomatic recognition of states under international law is not always conditioned on respect for human rights, the Taliban must not be allowed to use the humanitarian emergency as a bargaining chip to achieve international recognition.

In the absence of a genuine commitment by the Taliban to address the growing international concerns, the world must engage with the group on purely pragmatic and humanitarian grounds, without extending formal recognition.

This article is republished from The Conversation under a Creative Commons license. Read the original article here.