The MPs were concerned about the possibility of 'mass disenfranchisement' in India. 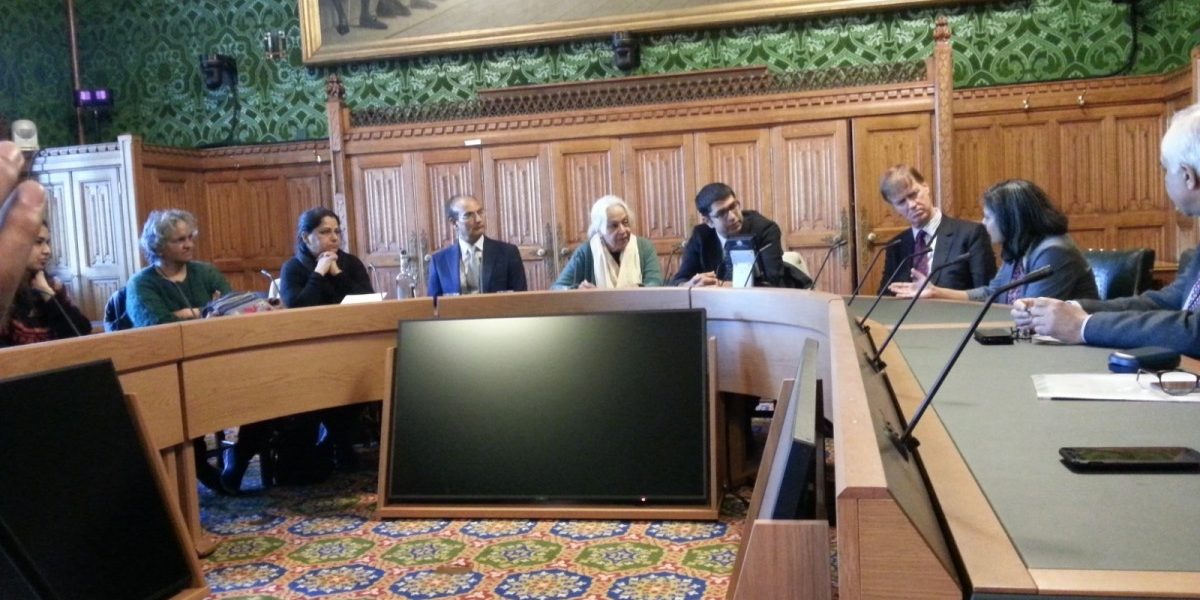 London: Labour MPs in the United Kingdom promised to soon table an Early Day Motion in Parliament that will discuss the concerns about India’s Citizenship (Amendment) Act (CAA) and the National Register of Citizens (NRC) that has seen widespread protests across India and also in cities across the world including in the United Kingdom.

On Monday afternoon, the committee room 6 in the Palace of Westminster saw Stephen Timms, MP from East Ham along with his colleagues Rupa Huq, MP for Ealing Central and Acton, Claudia Webbe, MP for Leicester East and Pat McFadden, MP for Wolverhampton South East intently listen to the concerns expressed by the South Asia Solidarity Group, Catch Watch UK and Gautam Bhatia, a legal expert who helped draft a petition challenging the CAA in the Supreme Court of India.

The British parliamentarians were concerned with the possibility of mass disenfranchisement of the minorities in India. Bhatia also took queries from the MPs.

Huq was concerned with how the rights of British citizens holding Overseas Citizens of India (OCI) status would be affected. Bhatia’s response showed that with the passage of CAA and NRC, the Indian government would also be able to cancel the OCI status should they be displeased with criticism from the diaspora. There are fears that the CAA has very wide provisions that can lead to cancellation of OCI card, he said.

Impressed by the solidarity in protests

Timms, who hosted the event, was impressed by the solidarity he observed in the mass protests in India which have brought together people from all walks of life and with various religious and political views. The participation of women in large numbers across India has also generated a lot of interest in the movement against CAA and NRC. Timms said that the diversity among the protestors was also seen in his own constituency. “Hindus, Muslims and Sikhs are all coming together,” noted Timms, whose constituency has a large number of Indian-origin families.

Timms has already written to the Foreign Office urging them to make a statement on the issue and also to the High Commission of India in the UK. Claudia Webbe, concerned with possible human rights violations, pledged to call on Prime Minister Narendra Modi to revoke the draconian legislation. The UK media too has given a lot of space to the anti-CAA protests in India, including the violence in Uttar Pradesh.

The meeting organised by South Asia Solidarity Group (SASG) and Ambedkar International Mission (UK) also marked the release of a jury report from the People’s Tribunal on State Action in Uttar Pradesh. The report highlighted the gross violence committed against Muslims by the police and their accomplice- the right wing Hindutva groups- taking orders directly from the BJP-led Uttar Pradesh government of Yogi Adityanath.

Amrit Wilson of the SASG spoke about the police violence unleashed on protests led by mostly students and women of minority communities like Muslims and Dalits. She also highlighted that the nationwide protests include almost everyone from rural workers to urban professionals. A protest march from 10 Downing Street to India House has been organised on Saturday, by a host of UK-based organisations in solidarity with the protestors in India to mark the National Demonstration Against Fascism in India on the eve of the Republic Day.

Concerns about how the Tory party had backed off from a law against caste discrimination in the UK under pressure from upper-caste Hindu groups were raised by Pat McFadden. Satpal Muman of Caste Watch UK, which has been at the forefront to outlaw caste discrimination by including it in the Equalities Act, spoke how overseas Hindutva groups lobbied extensively to block the inclusion. “B.R. Ambedkar had warned that that ‘Hindu Raj’ would be a calamity for India,” he said, adding that more work needs to be done to create awareness that caste discrimination is real.

There are 15 Indian-origin MPs in UK Parliament, with the highest-ranking, cabinet minister Priti Patel, holding the position of secretary of state. While Indian-origin MPs have raised concerns with the Indian ambassador in private, the silence of the Tory MPs is almost deafening. This divisive politics was also evident during the general elections in December 2019 when Indian-origin voters got WhatsApp messages to not vote for Labour because of the party’s leader Jeremy Corbyn raising concerns with the communication blockage in Kashmir. Webbe confessed that she faced an ‘unprecedented hate campaign’ during the recent elections and Timms said that some of his constituents confided in him that they were “told by the (Hindu) temple authorities not to vote Labour”.

Despite this, all Indian-origin Labour MPs and Labour candidates from constituencies with a high Indian vote won their seats. These Labour candidates are now emerging as the torchbearers of protests against CAA and NRC in the British parliament.

Note: The article was updated to remove a line which inadvertently misquoted lawyer Gautam Bhatia.