The Senate probe reveals that the Covaxin scandal could be much bigger, as the Brazilian government intended to buy 50 million more doses of Bharat Biotech’s vaccine. The report concludes the doses would never have reached Brazil, despite advance payment to the Indian firm. 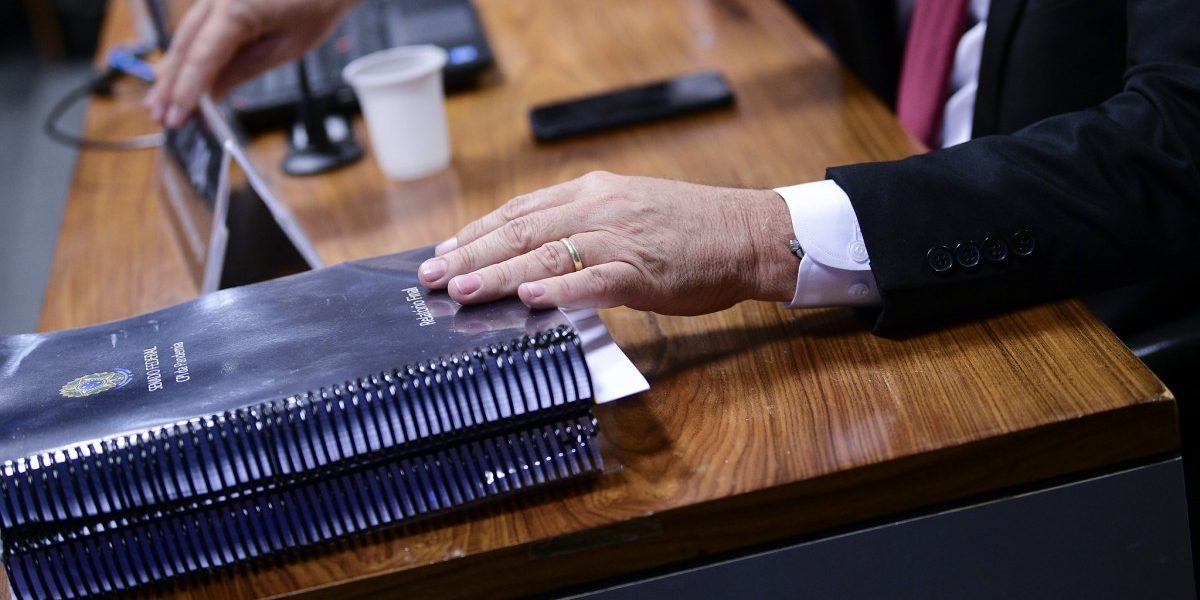 The commission report, which runs into 1,282 pages, has more than 110 pages devoted to the Covaxin deal which is the highlight of the probe. Photo: Pedro França/Agência Senado

Sao Paulo: On the eve of completing six months of non-stop investigation into the handling of the COVID-19 pandemic by Jair Bolsonaro’s government, a parliamentary commission of inquiry (CPI) approved on Tuesday night its report that indicted the Brazilian president with 10 serious offences, including crimes against humanity. Holding Bolsonaro “criminally responsible” for the government’s miserable response to the pandemic, which has killed more than 6,06,000 Brazilian so far, the 11-member senate panel approved by seven votes to four its recommendations of charging 79 persons and two companies – both linked to the contract for the purchase of Bharat Biotech’s Covaxin – with 24 different crimes.

The report will now be submitted to the country’s prosecutor-general and the speaker of Congress. Though both of them are unlikely to act on the CPI report, the Brazilian president can potentially face impeachment and criminal trials. The six-month-long probe has already damaged him politically.

After day-long deliberations at the senate, during which the opposition lawmakers took the government to task, the commission put its stamp of approval on the report which has indicted a serving president with serious crimes for the first time in the country’s history. The panel will submit its report to the prosecutor general, Augusto Aras, on Wednesday. As Aras may not accept the CPI’s request for action against Bolsonaro, the commission members are working on a plan to move the Supreme Court, which had ordered the inquiry in March. Senator Renan Calheiros, the CPI rapporteur, also plans to send the report to the International Criminal Court for it to look into the accusations of crimes against humanity against the Brazilian president.

The report, tabled at the chamber last Wednesday, was expected to be approved easily as opposition senators formed majority in the panel, but Bolsonaro’s behaviour during the past week made them go at him with all guns blazing. On Tuesday morning, just ahead of beginning of the CPI session, Senator Calheiros called Bolsonaro a “serial killer”, blaming him for the uncontrolled pandemic in Brazil. “It is (the responsibility) mainly of this president, this serial killer, who has a death compulsion and continues to repeat everything he has done before,” said Senator Calheiros. After six months of investigation, the 11-member senate panel approved its report by a 7-4 majority vote on Tuesday. Photo: Marcos Oliveira/Agência Senado

Despite indictment by CPI on 10 counts, Bolsonaro has shown little remorse or change in his attitude. In a social media live last week, Bolsonaro falsely claimed that COVID-19 vaccine could cause HIV infections. In the final version of the CPI report, the panel included and approved a request to remove Bolsonaro from all social media platforms. The request will now be sent to Facebook, Twitter and YouTube, which have all dropped Bolsonaro’s video from their platforms.

A ban by tech firms – far from certain yet – could be devastating for Bolsonaro, whose entire politics and campaign run on social media. Facing an extremely tough election next year, Bolsonaro has been slowly moving to web platforms populated by far-right crowds in Brazil and the US, where former president Donald Trump is planning to launch his own social media firm.

A parliamentary commission does not have powers to punish the persons it indicts. It is basically a fact-finding exercise which can indict people and recommend judicial actions against them. There have been several senate probes in Brazilian history, but the CPI into the handling of COVID-19 pandemic captured the country’s imagination as it exposed the reckless policies of Bolsonaro as the virus ravaged the country. The inquiry also looked beyond Brazil’s borders as it probed several dubious deals, including the purchase of chloroquine and Covaxin from India, and the complete lack of effort by the government for tackling the pandemic.

These policy decisions, concludes the CPI report, were not a mistake; they were made as part of geo-political alignment with the US government under Donald Trump. In the final draft of the report, voted on Tuesday, the panel added a whole new chapter, “International relations, geopolitics and denialism”, which explains how the Bolsonaro government refused to combat the pandemic as it “aligned with the foreign policy goals of Donald Trump” and followed far-right groups across the world. “This conspiratorial and paranoid worldview also advocated that the countries that threaten the US hegemony, such as China and Russia, are waging a war against the West and its values,” say the opening lines of the chapter, further adding that the spread of the virus was projected by the Brazilian president and his then foreign minister, Ernesto Araujo, as an attack by China to “undermine the Western economies”.

Just like Trump blamed China for the pandemic as he did little to control it, says the report, Bolsonaro rejected social distancing norms, mask mandates and vaccines, while pursuing the so-called “herd immunity” to keep the economy open. “The government adopted, as a state policy, an openly hostile attitude towards China, Russia and the BRICS group. In the geopolitical dispute between the US, on the one hand, and China and Russia, on the other, the Bolsonaro government chose to join the first pole, instead of defending Brazil’s own sovereign interests,” says the report, blasting the policies which have killed hundreds of thousands, infected millions and flattened the country’s economy.

By following Trump, who attacked all multilateral institutions in the middle of the pandemic, Bolsonaro not only let the virus spread in Brazil, he also blocked international cooperation with BRICS partners. The CPI report is scathing in its criticism of how Brazil “abandoned its diplomatic tradition of defending public health at the World Trade Organisation (WTO)” by opposing an initiative by India and South Africa which had called for the suspension of patents for better distribution of vaccines across the world. Also, the Brazilian leader had launched an attack on the World Health Organisation (WHO) when it recommended a science-based approach to the pandemic. The senate report recommends that Bolsonaro should be held accountable for causing deaths in Brazil by following Trump’s disastrous policies. “We hope that the ministry of justice and other competent authorities will be able to expand their investigations into these links between the Brazilian foreign policy and the crimes identified by this CPI,” says the report, whose recommendations can lead to opening of criminal cases by various agencies.

In 2020, when the whole world was scrambling for the few vaccines that were then available, it was reported in the media that Brazil was having serious diplomatic issues with India and South Africa over the patents issue at WTO. At that time, besides showing no urgency to buy the available vaccines, the Brazilian government failed to pick the full quota of doses it was eligible for under the COVAX facility of WHO. But, says the CPI report, the government showed a “sudden and urgent interest” in Covaxin, with the intermediation of Precisa Medicamentos, a “Brazilian company with questionable reputation”. “The price of Covaxin proved to be at least 50% more than the average of the other vaccines and significantly higher (about 1,000%) than the price offered initially,” says the report, which also points out that the contract for Covaxin was signed much faster (in three months) than the contracts for Pfizer and Janssen (10 months), though it was not approved by the Brazilian drug regulator (ANVISA). 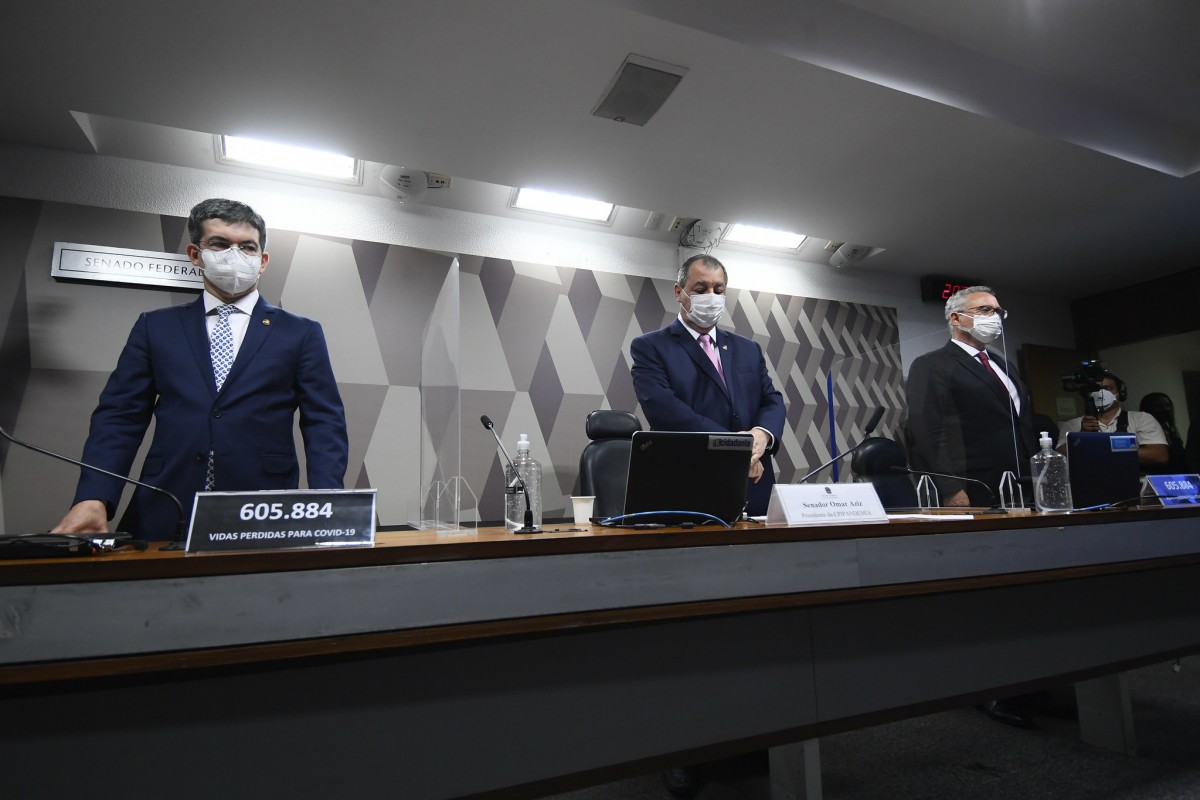 (From left) Senators Randolfe Rodrigues, Omar Aziz and Renan Calheiros observe a one-minute silence on Tuesday as a tribute to 6,06,000 Brazilians killed in the pandemic Photo: Marcos Oliveira/Agência Senado

The corruption scandal around the purchase of 20 million doses of Covaxin has been the main finding of the inquiry. Now, the CPI report has revealed that the scandal could have been much bigger because the Brazilian government was interested in buying another 50 million doses of Covaxin. This interest in additional doses, says the report, was expressed in an official letter (dated March 6, 2021), even after ANVISA had rejected to give a certificate of good manufacturing practices to Bharat Biotech.

A meticulous probe by the CPI and scandalous revelations about Madison Biotech, an offshore firm in Singapore, seeking $45 million in advance, resulted in the cancellation of the contract in July. “By preventing Brazil from buying 20 million (and eventually another 50 million) doses of Covaxin, the CPI saved Brazil from serious problems. In addition to the likely financial loss if the payment to Madison Biotech had been made, other serious damage could occur if Brazilians had been vaccinated with this vaccine,” says the report, questioning the lack of international approval of the Indian vaccine.

In total, the CPI report has given more than 110 pages to its findings about the Covaxin deal. The entire report, running into 1,282 pages, is replete with references to India, Bharat Biotech and its vaccine; several top executives of the Hyderabad-based company have their names and communications mentioned in the report; and two top executives of Precisa Medicamentos, the Indian firm’s partner in Brazil, have been indicted for “running a criminal organisation” besides other frauds.

Given the history of Precisa Medicamentos, which has been under the scanner for not supplying the medical products to the ministry of health after receiving millions in advance, the CPI probe went beyond Brazil and closely examined Bharat Biotech’s deal with Paraguay. Brazil’s southern neighbour, found the probe, ordered two million doses of Covaxin and made partial payment in advance but did not receive the doses from the Indian firm. “For all that has been exposed, it is possible to conclude that even if Brazil had bought Covaxin with advance payment, we might not even have received the doses,” says the report, adding that the inquiry saved Brazil from “a huge loss and an international embarrassment” because Bolsonaro was pushing for Covaxin while refusing to buy Pfizer and CoronaVac which were available and approved by ANVISA.

Even though cornered by the senate inquiry and facing the toughest challenge of his three-year-old presidency, Bolsonaro remains defiant – and in denial. On Monday, a day ahead of the voting on CPI report, the president already rejected the findings and indictments. “They call me as genocidal, charlatan, document forger and exterminator. It is absurd what these guys have done,” Bolsonaro said in an interview, attacking the senators who have investigated and indicted him.

But, on Tuesday evening, the CPI investigators were standing firm. At the end of the voting session, Senator Randolfe Rodrigues, the vice president of CPI, said the panel intended to pursue Bolsonaro’s impeachment. “The CPI report does not ask for impeachment. It points out the existence of a crime of responsibility. It is now time for civil society and jurists to make the request for the president’s impeachment, based on the report of the parliamentary commission of inquiry. We will follow it,” said Senator Rodrigues.

Shobhan Saxena and Florencia Costa are independent journalists based in Sao Paulo, Brazil