The target of their protests is Jair Bolsonaro, the right-wing populist presidential candidate who has puts democracy in Latin America’s largest country at risk. 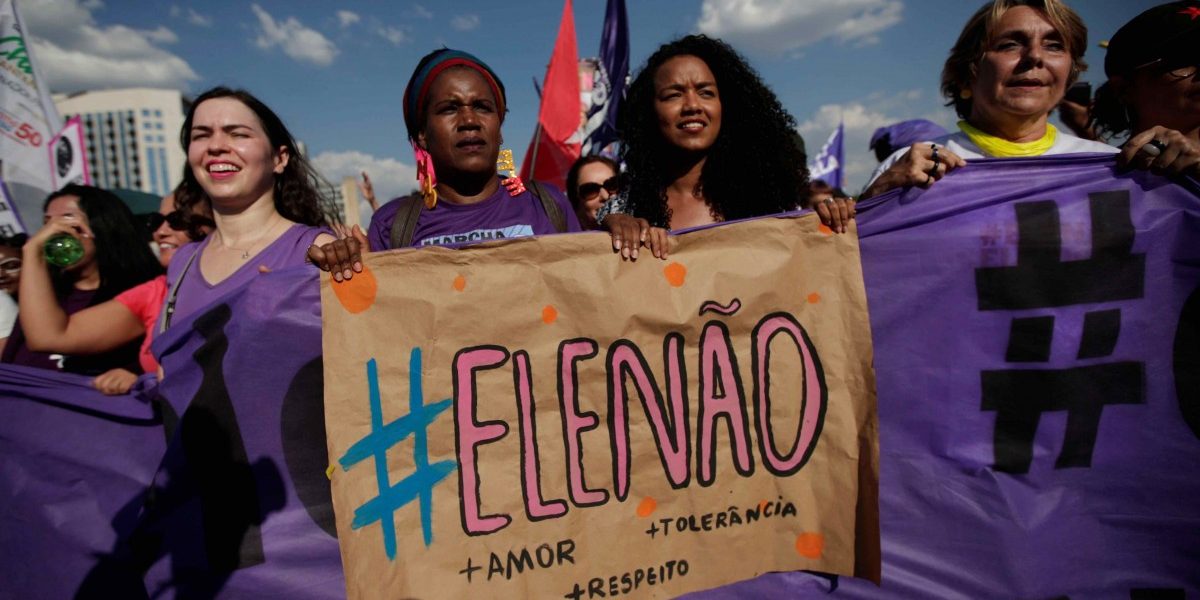 Women holds a sign that reads "Not Him" during demonstrations against presidential candidate Jair Bolsonaro in Brasilia, Brazil September 29, 2018. Credit: Reuters/Adriano Machado 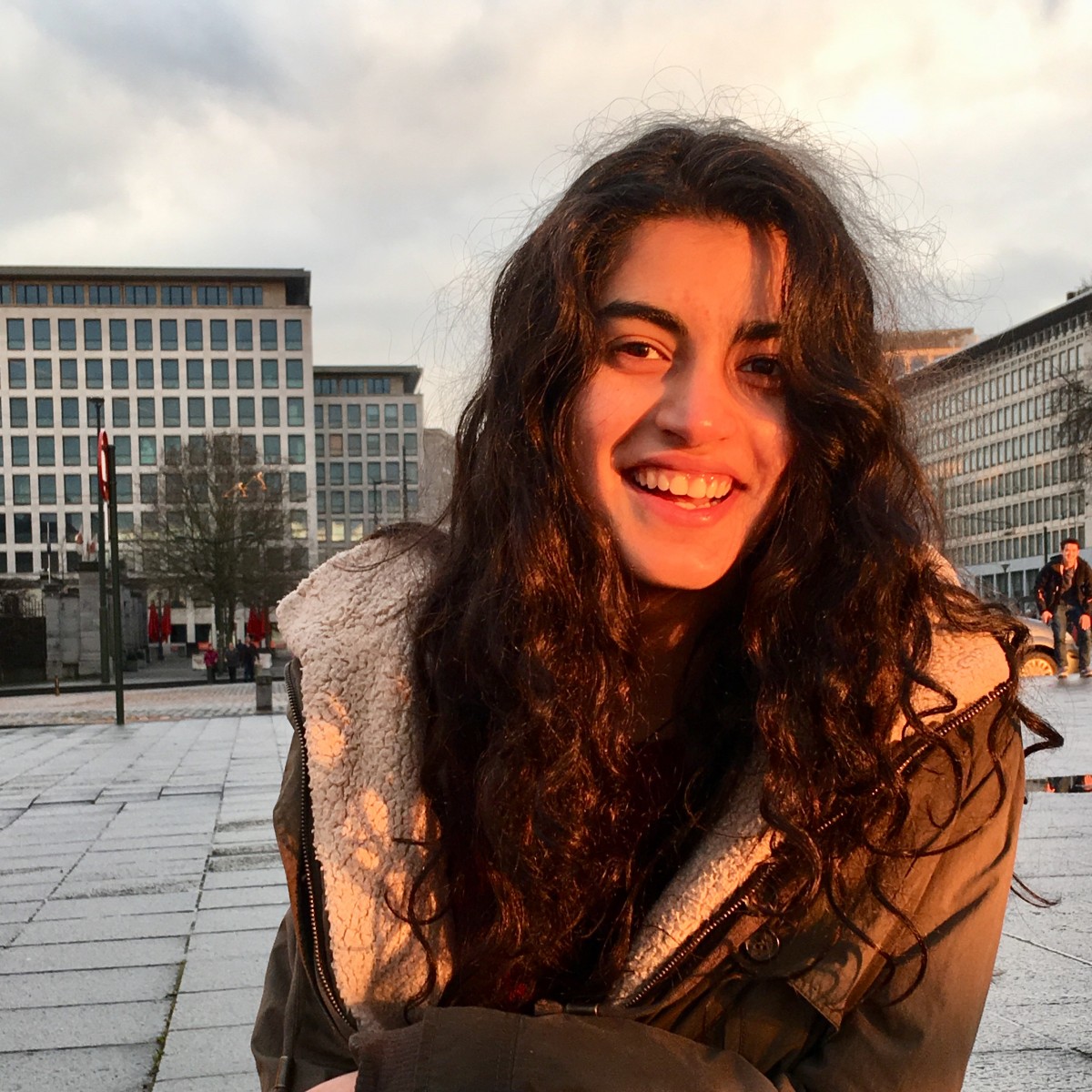 The Brazilian national elections are being conducted on October 7 and the country is abuzz with anticipation in a highly politically-charged environment. The elections have been riddled with controversies ever since the arrest of ex-President Lula for corruption earlier this year. Many have also called this the most divisive and important election in the history of the nation.

Social media has played a crucial role in election campaigns globally and Brazil has also witnessed its share of online activism. Political campaigns and propaganda are at their apogee, leaving no platform untouched. Brazil has a very prevalent internet culture and is the second largest user base on Facebook – India, along with the US are tied for the first place now. Quite similar to India in many ways – Brazil has a sizeable population with a huge market for mobile phones and the internet, with almost half of the netizen below the age of 30, and yet severed by rampant inequality and development challenges.

The internet has been a place to not just discuss memes/jokes but also to talk about political issues. In many ways, Brazilians are accustomed to online campaigns and this election has engaged them in interesting ways.

A campaign that went viral amongst the women, LGBTQ+ and the youth is against Jair Bolsonaro, one of the leading candidates in the poll. The hashtag #elenão #elenunca (translates to not him, never him) is ubiquitous on every form of social media – Facebook, Twitter, Instagram and even WhatsApp.

Bolsonaro, a right-wing populist from the Partido Social Liberal (PSL) has been accused of being sexist, racist, homophobic and transphobic – he went to the extent of claiming to never wanting to rape female Congressman Maria do Rosário “since she was too ugly.” He also reportedly said that he would prefer a “dead son over a gay one.” He doesn’t see a gendered pay gap (where women should be paid less for the same job) as a problem.

Also read: Women Are Shattering the Glass Ceiling Only to Fall off the Glass Cliff

His political opinions proliferate and reflect on his ‘machismo’ culture. This machismo is evinced through his violent, aggressive and chauvinistic opinions. Bolsonaro deifies the army, praises brutal and violent dictatorships, claims racism doesn’t exist while making racist remarks about black Brazilians and believes immigration from Venezuela is the cause of prostitution and crimes. Violence and hatred have been spreading and his supporters have often engaged in the display of aggression including an attack on Lula’s bus when he was campaigning earlier.

In a political backdrop brimming with such turmoil, Brazilian women and LGBTQ+ community heralded as the warriors. The hashtag and Facebook profile picture frame saying #elenão have gone viral. This movement was spearheaded by a group called ‘Mulheres unidas contra Bolsonaro’ (Women united against Bolsonaro) and garnered more than a million followers. Despite the Facebook group being hacked and renamed ‘Mulheres com Bolsonaro’ (Women with Bolsonaro), the movement has been burgeoning. 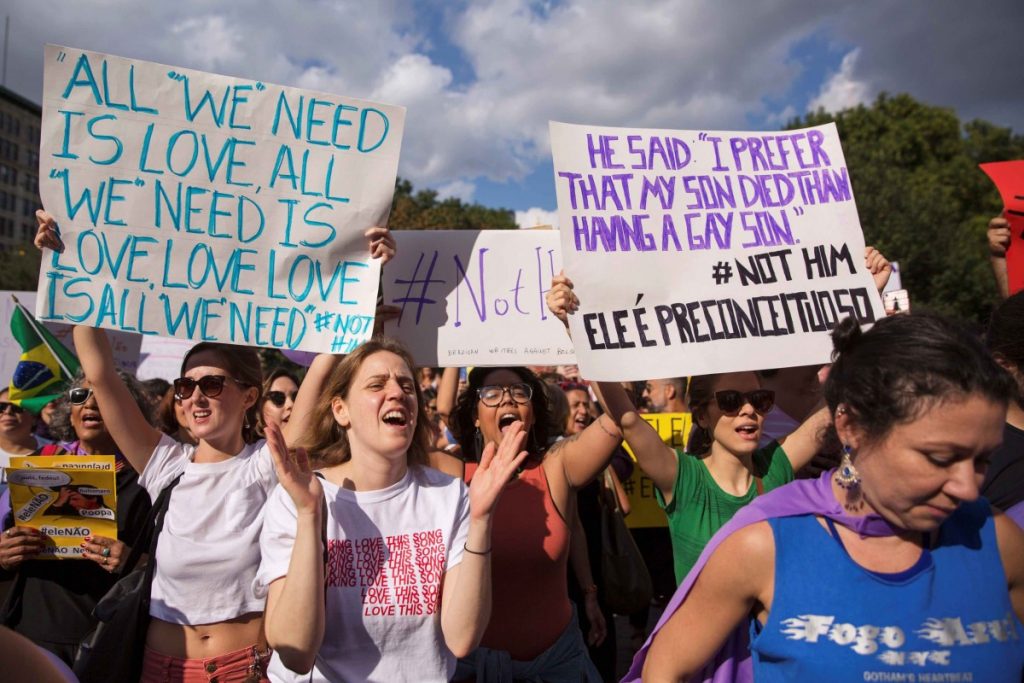 Women face many forms of gendered violence, among other challenges in Brazil. One women is sexually assaulted every 11 minutes (Institute for Applied Economic Research, 2013) and every 1.5 hour a woman is murdered due to a gender-related causes (Agência Patricia Galvão, 2017). The situation becomes worse when racism is intertwined with sexism: black women are most affected by gender and race-related violence. Earlier this year, councilwoman of the city of Rio de Janeiro, Marielle Franco, was violently murdered. She was one of the few black women in power and one among the handful of lesbians in office. Her death created an uproar amongst women and members of the LGBTQ community.

Brazilian women constitute about 52.5% of the electorate and have been the main opponents, creatia ng backlash against his arguments. Huffpost Brasil reports that according to latest polls, Bolsonaro is rising as a preference but is still the most rejected candidate amongst women. Historically, no other candidate has had such a gendered gap among voters.

Also read: Hate or Hope: In a Bitter Election, Brazil Fights for Its Soul and Democracy

According to Gabriela Andrea, an ex-student of the University of Brasília “women are making history in these elections by playing such a crucial role. They decided to stand up for themselves and actually became a real threat to Bolsonaro”. She says that “even though he may be ahead in the polls, the women’s movement has succeeded since Bolsonaro’s team realised the very consequences of his offensive statements. Hence, attempts were made to break the movement – by either hacking the Facebook group or creating their own digital army or organising pro-Bolsonaro protests which weren’t very successful and only attended by a handful. Now he is also denying that he made these statements and is portraying himself as being respectful of women using his wife and daughter in the forefront. They are afraid and that is a win for our movement.”

Activism is witnessed both online and offline with various protests being organised. Thousands of people marched in different cities like Rio de Janeiro, São Paula, Brasília and even internationally in France, Portugal and Germany. Other candidates like Fernando Haddad of the PT (Workers Party), Ciro Gomez of PDT (Democratic labour Party) and Marina Silva of the Sustainability Network have also expressed concerns and used this opportunity to further their cause among women and other minorities. 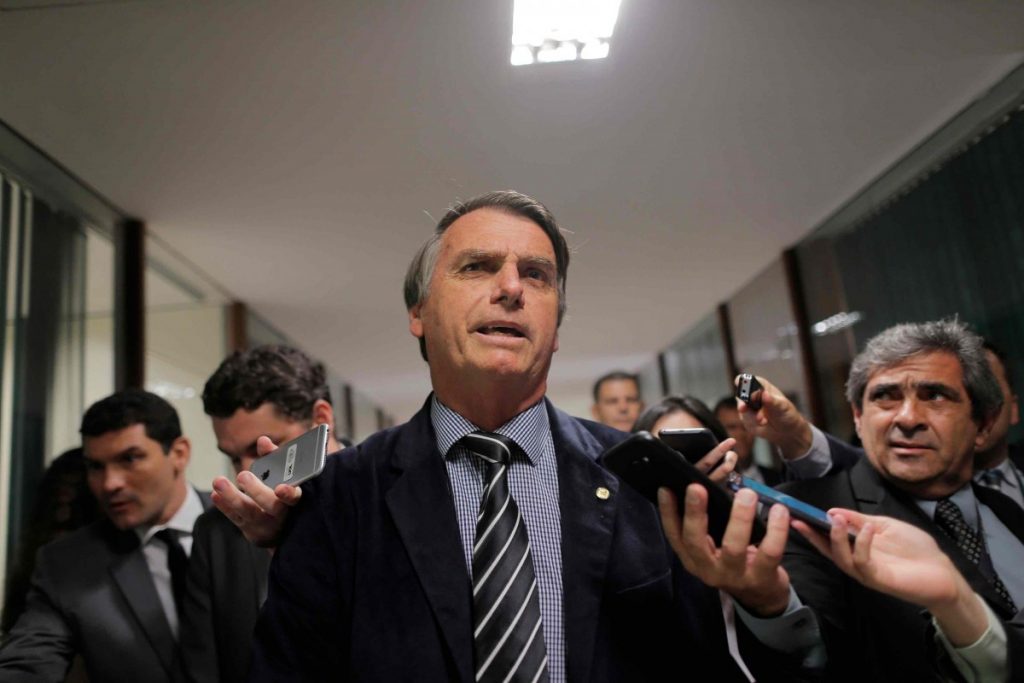 Joana Schmidt, a law student at the University of São Paulo says at one of the protests in Sao Paulo “there were almost 5,00,000 people – and these were women, men, families who were autonomous and not mobilised by any political party but had shown up against Bolsonaro. She believes his speeches and statements have also been spreading a machismo culture around Brazil, making people more conservative and men think their ‘sexist’ actions are legitimised because the presidential candidate endorses them.”

Isabelle Oglouyan, a law student at the University of São Paulo says “women are the protagonists of this movement which has spread everywhere, even to the countryside. Erstwhile, most movements were restricted to big cities. This is very important for the feminist movement in Brazil because women are not well-represented in politics but this is changing now.”

Irene Niskier, a researcher at FGV, Rio de Janeiro says “women have understood how powerful sorority can be – they comfort each other, grieve together and most importantly engage in politics together which is relatively new to our country.”

However, the Twitter war continues and hashtags like #bolsanoroamordobrasil (bolsanoro the love of Brazil) are trending as a contrast or rebuttal to #elenão. Bolsonaro was even stabbed at a rally on September 6 but is still leading the opinion polls. According to a Reuters report and an opinion poll by Datafolha (October 3), Bolsonaro was leading with 32% support followed by Haddad from the Worker’s party (PT). However, Bolsonaro’s rejection rate (people who say would never vote for him) has also increased to hit almost 45% making the election polarised.

Bolsonaro, prolonging the populist wave in Latin America’s largest country, puts democracy at risk which is already vulnerable and fragile- considering the continents history with dictatorship. He mobilises people on the idea of combating corruption and unemployment but among other things, his agenda includes no gun control and/or leniency regarding gun purchase, imposing more severe punishments for prisoners (including capital punishment) and his presidency can have major ramification on the future of LGBTQ+, women and human rights policies.

The result of the election is important, indeed, but this may also be a good opportunity to admire the strength and solidarity of the feminist and LGBTQ+ movement, simultaneously drawing inspiration from them.

Shreyya Rajagopal is a student of Political Science and International Development focusing on South Asia and Latin America.