Women voters hold the key as 148 million Brazilians head to polling stations on Sunday to elect a president, 27 state governors, 81 senators, 513 federal legislators and 1,059 state deputies in the most unpredictable and polarised election since the country’s return to democracy in 1989. 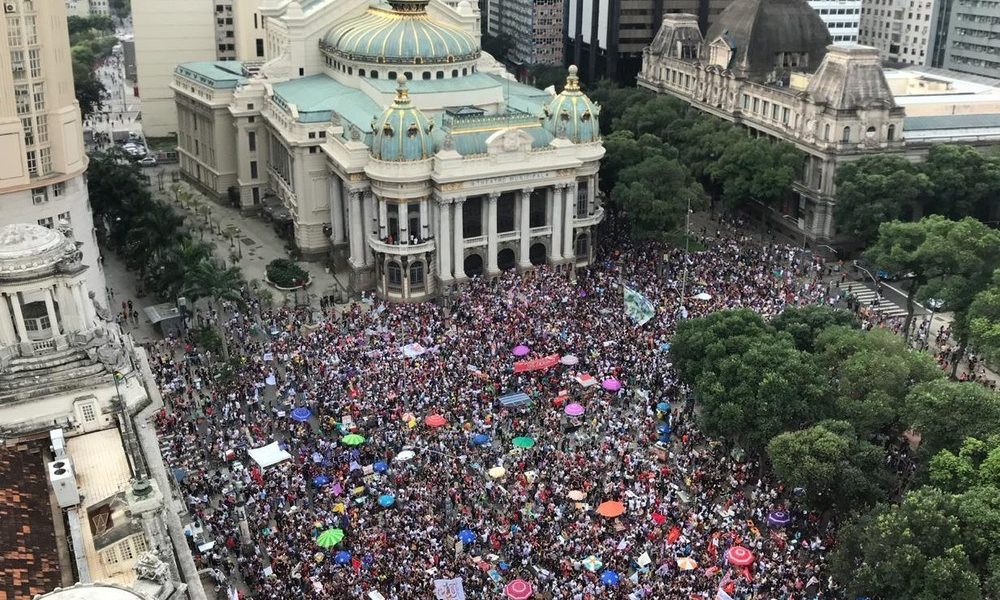 More than 100,000 women gathered in downton Rio to protest against then far-right candidate Bolsonaro who then became president. Photo: Cataraca Livre

Sao Paolo: On a tense Saturday evening, just 12 hours before the polling booths open across the three time zones of the biggest South American country, at least two big and one small opinion polls showed that Brazil was polarising on class, racial and regional lines and that the second round of the presidential election would pit Jair Bolsonaro, a far-right candidate who is high on hateful rhetoric and short on policies, against the Workers’ Party candidate Fernando Haddad, a former centre-left mayor of Sao Paulo who is promising to make Brazil “happy again” with more jobs and education opportunities. While two of the leading private pollsters put Bolsonaro at 36% and Haddad at 22%, a survey by Vox Populi, the first-ever funded by voters, gave Bolsonaro 34% as compared to 27% for Haddad. Ciro Gomes, another centre-left candidate who is trying hard to make it to the next round, was oscillating between 11% and 13%.

In the projections for the second round, as of Saturday, Bolsonaro was technically tied with both Haddad and Gomes. In the last week, as a couple of polls showed a sharp rise in Bolsonaro’s popularity by almost 6% as a top evangelical group which also owns a big TV network endorsed Bolsonaro, his supporters claimed that the former army captain, who has repeatedly lauded the country’s military dictators and spit fire at human rights activists and leftist parties, would sweep the election in the first round itself. But all the opinion polls on Saturday night put such speculation to rest. According to Marcos Coimbra, director of Vox Populi, which organised the crowd-funded survey, the “chance of not having a second round was close to zero.”

Also, as Bolsonaro has the highest rejection rate (46%) among the top five candidates, there is little chance of him making a big sweep – in either round. But, according to some other pollsters, Bolsonaro’s victory in the first round is still a “mathematical possibility”, depending on how many valid votes are cast on Sunday. As voting is mandatory for all citizens above the age of 18 (optional for 16-year olds), the Brazilian election system gives the voters the option of “nullifying” their vote or to leave it blank. The nullified and blank votes are not counted in the final tally of votes. According to polls on Saturday night, Bolsonaro was polling around 42% of valid votes – 8% less than the votes needed to win the election.

Also read: Hate or Hope: In a Bitter Election, Brazil Fights for Its Soul and DemocracyThe Brazilian general election is the biggest election exercise in a single day anywhere in the world. On Sunday, some 148 million Brazilians will head to the polling stations to elect a president, 27 state governors, 81 senators, 513 federal congressmen and 1,059 state legislators (The country will vote for more than 5,000 mayors and thousands of municipal councilors in October 2020). With each citizen casting six ballots on Sunday, some 888 million votes could be cast between 8 am and 6 pm across the country, with the polls in the Amazonian states closing at least two-and-a-half hours after polling ends on the Southern Atlantic coast states like Sao Paulo and Rio de Janeiro.

Exit polls, which have a history of being highly accurate, are expected to roll out as soon as the voting comes to an end in the state of Acre, which shares border with Peru and Bolivia.

After suffering 21 years of army’s brutal dictatorship, Brazil began to return to democracy in 1985, but the first direct election was held only in 1989. Since then, Brazil has conducted democratic elections every four years, making it one of the biggest democracies in the world – and the second biggest in the Americas. But the Brazilian democracy suffered a huge setback in 2016, when the country’s first woman president, Dilma Rousseff, was impeached by a clutch of right-wing parties on a very flimsy and questionable ground of budget manipulation.

But, ironically, Rousseff is now leading the polls for a seat in the Senate from her home state, and it’s the Brazilian women who are the biggest obstacle in Bolsonaro’s rise to presidency. In a country which has more women than men (a ratio of 97 males to 100 females), the women vote could be a clinching factor. Last Saturday, more than a million Brazilians, most of them women, filled the country’ streets and public squares in the country’s 27 states to protest against Bolsonaro. The protest grew out of a Facebook group called “Women United Against Bolsonaro” which nearly four million people have joined in the past three weeks. Bolsonaro, who has made his political career by attacking women, blacks and LGBT community. With the #elenao (Not him) trending on the social media and shared by the likes of Madonna, Cher and Stephen Fry besides many Brazilian artists and writers, women of all ages turned it into a day of outrage against Bolsonaro’s brand of hate politics. (According to polls, he is doing worst among the women voters, with 49% of rejection).

As women and LGBTQIA+ groups stormed the country’s streets and it seemed Bolsonaro’s growing popularity was stalling and Haddad was about to catch up with him, Brazil’s powerful evangelical groups, biggest media organisations, the country’s financial elite, the upper and middle classes threw their weight behind him, giving a boost to him and further polarizing the deeply divided country. With close to 14 million unemployed and more than 70,000 homicides in a year, the country has been in a grip of anxiety. Bolsonaro, who has promised to ease gun controls and launch a war on drug gangs, has very cleverly tapped the anger of ordinary Brazilians by blaming it all on the leftist Workers’ Party, which was in power from 2003 to 2016. 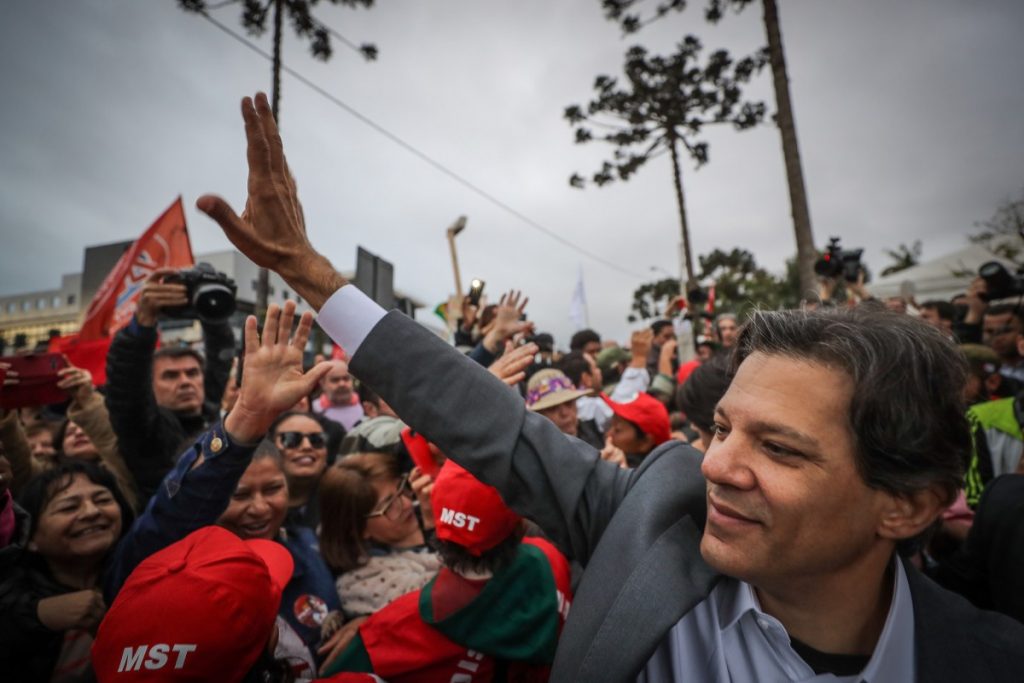 Fernando Haddad of Workers’ Party is being attacked by the Bolsonaro campaign through fake news on Whatsapp and social media. Credit: Author provided

Staying indoors – in hospital and home – since a September 6 knife attack left him injured, Bolsonaro has shied away from all TV debates, a tactic that has been criticised by all his opponents. Bolsonaro’s preferred weapon of electoral propaganda has been social media and WhatsApp, which has been filled with fake news and disinformation by his campaign. This week, Fernando Haddad complained to the electoral court about how the Bolsonaro campaign was spreading fake information about his family. With Facebook doing nothing about the flurry of fake news that has swamped the social media in Brazil, the Workers Party’s think-tank suspects an attempt to sway the election in Bolsonaro’s favour by outside forces. “It seems obvious that there is a finger – or an entire hand – of foreign intelligence agencies at work, mainly North American, in the Brazilian elections. The modus operandi shown in this final stretch is identical to that used in other countries and requires technical and financial resources and a level of manipulative sophistication that the Bolsonaro campaign does not seem to have on its own,” Marcelo Zero, a sociologist, international relations specialist and technical advisor to the Workers Party Senatorial leadership, wrote in a column this week. “The CIA and other agencies are here, acting in an extensive manner.”

Given Brazil’s history of US-guided coup in 1964 and continued interference in its affairs ever since, such a suspicion of coup through the ballot are well-founded. Some of Brazil’s biggest artists and intellectuals too have warned against the subversion of democracy. “It’s never too often to remember how throughout history and to this day fascist, Nazi leaders and many other autocratic regimes were first elected with the promise of rescuing the self-esteem and credibility of their nations, before submitting them to the most varied authoritarian excesses,” said the declaration, Democracia sim or “yes to democracy”, signed by among others Caetano Veloso, Chico Buarque and Gilberto Gil, three top composers who all spent time in exile during Brazil’s dictatorship years.

On the eve of Brazil’s most important election, Bolsonaro was busy selling a Trump-like promise of making “Brazil great again” in his message to the electorate.  These promises and fears of an iron-fist suppression will be on the mind of 148 million Brazilians who go to polling booths on October 7 – and October 28, if the election goes to second round.