Dozens of Indians, Pakistanis and locals urged the two countries to utilise dialogue to resolve tensions after the Pulwama attack. Massachusetts: It was 35°F (-2°C) and three hours before snow was to hit the Greater Boston area, when over 100 people gathered on the steps of the Massachusetts Institute of Technology (MIT) to protest for peace in South Asia on March 3, 2019.

The protesters gathered to oppose the escalating tensions between the nuclear neighbours and rivals, India and Pakistan, after more than 40 Indian paramilitary officers were killed by a suicide bombing in Pulwama, Kashmir, by the Pakistan-based terror organisation Jaish-e-Mohammed. The attack was followed by Indian air strikes on Pakistan. While tensions have subsided after Pakistan released captured Indian pilot, Wing Commander Abhinandan Varthaman, cross-border shelling continues on the Kashmir border. 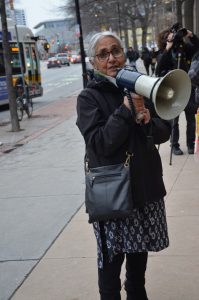 “I am a pacifist and I certainly don’t believe in war,” said Aruna Roy, a prominent Indian activist on why she decided to join the standout. She founded the Mazdoor Kisan Shakti Sangathan (MKSS) and led the Right to Information campaign. “There are issues between the two countries that need to be settled. I also believe that those who are affected by terrorism should have a recourse – not through violence but through dialogue,” she added.

Roy called for love as a solution over war, alongside dozens of Indians, Pakistanis and local South Asian and American activists.

“It is interfering with people’s lives, particularly people who don’t believe in war,” said Cyma Firdous, a Pakistani physician on why she travelled from the neighboring state of New Hampshire to join the Cambridge’s Global Standout for Peace.

“India needs to work on Kashmir. They cannot let children grow up with post-traumatic stress disorder (PTSD) surrounded by the violence. Pakistan also needs to tackle extremism in its borders. We cannot raid the camps once in a while and then forget about them. Both sides need to work on these issues,” she said.

The Cambridge Global Standout for Peace was held in conjunction with similar protests around the world in Bangalore, Kolkata, Karachi, New York, Washington DC and San Francisco. The event featured organisations like the Global Stand Out For Peace Community, Aazaad Lab, Answer Coalition, the Coalition for a Democratic India and Aman ki Asha.

Watch: Lessons From the Balakot Airstrikes

Activists like Satyanarayan Ray Pitambar Mohapatra, who spoke on behalf of the ANSWER (Act Now to Stop War And End Racism) Coalition, raised questions about war profiteering and capitalism. He particularly criticised how “war between the two nations will be a ​double whammy ​for the workers and the farmers as they are the one who will be slaughtered at the front, and not the ruling classes of both the nations.”

“Say no to war between India and Pakistan. Resist the warmongers. Fight the ruling classes and not with each other,” he added. 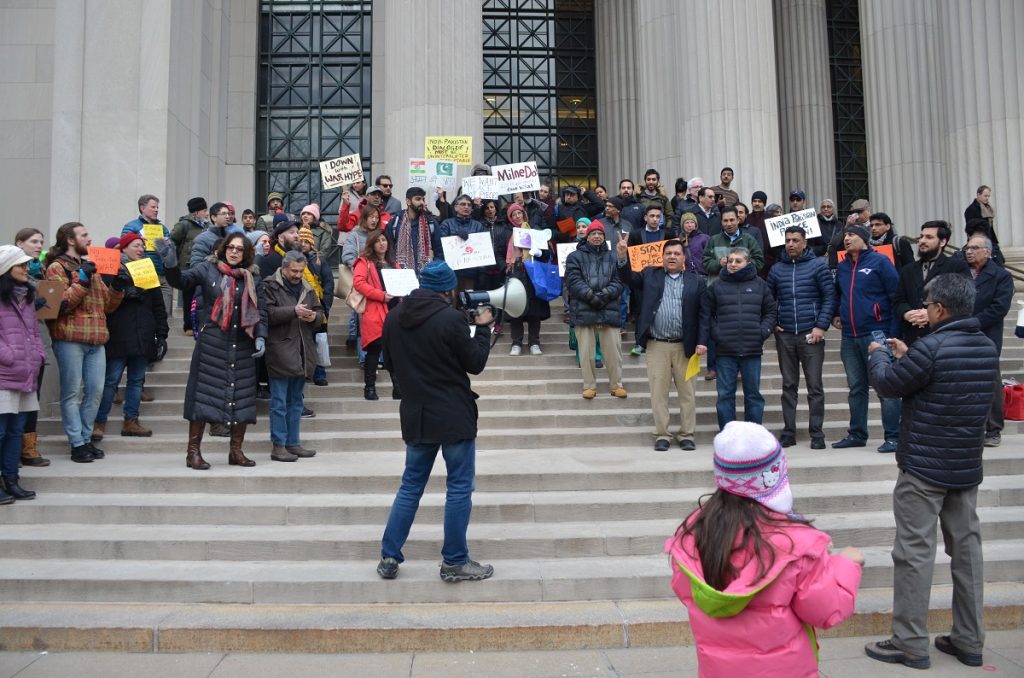 Other speeches called for dialogue between the nations. The protestors stood up for national anthems from both sides of the border. There were also speeches criticising the deteriorating state of Kashmir and the rising violence in the valley, Some Kashmiri activists raised calls for “azadi”. There was collective opposition to the cost incurred by Kashmir in the tug-of-war between the two neighbours.