Boris Johnson’s Free Ride Is Over. The Opposition Is Now Asking Tough Questions.

A series of lamentable gaffes and poorly prepared announcements has eroded public trust in Johnson's handling of the pandemic.

‘How on Earth did it come to this?’

With this taunt to the face of the prime minister, the new leader of Britain’s opposition Labour Party, Keir Starmer, made clear that the political gloves are off.

During the first few weeks of the pandemic, as the nation struggled to come to terms with the scale of the crisis, Boris Johnson’s government got, in political terms, a free ride. Johnson’s personal roller-coaster – coming close to death from COVID-19 then a couple of weeks later going back to the hospital to be present for the birth of his son – both prompted public sympathy and muted opposition criticism. And the government’s embrace of corona-socialism – pledging tens of billions of pounds to shore up the economy and save jobs and embracing the state-run National Health Service with expressions of undying esteem – wrong-footed left-wing critics.

No longer. A series of lamentable gaffes and poorly prepared announcements has eroded public trust in the government’s handling of the pandemic. There is a growing clamour for answers about how Britain, two weeks behind Southern Europe in succumbing to the virus, wasted that crucial window of opportunity. The Conservative government was late to realise the immensity of the public health emergency – late to lockdown, late to go for mass testing, late to source personal protective equipment, late to recommend face masks – and still hasn’t introduced quarantining for the continuous arrivals trickling into the UK, though that’s said to be imminent now.

The result: more than 33,000 lives lost to the virus, according to the government’s own figures. Only the US – with five times Britain’s population – has a heavier death toll. Of nations of similar size, only Belgium and Spain have significantly higher COVID-19 mortality rates.

When you take deaths per million of the population, this virus is proving almost 300 times more lethal in Britain than in India. To be precise, at the time of writing the figures on the authoritative Johns Hopkins site suggest that Britain’s death rate is 274 times greater than India’s. That’s more than can be explained away by flawed or partial statistics.

The epidemic in Britain is past its peak, but the number of deaths is proving stubbornly slow to edge down. Several hundred people are still succumbing each day after testing positive for the coronavirus. Yet in the past week, Boris Johnson has announced the first steps in easing the lockdown. The crystal clear government injunction to ‘Stay at Home’ has been replaced by the woolly, ‘Stay Alert’. Manufacturing and construction industries are being urged to get back into gear – though with some social distancing at the workplace. Primary schools will start to re-open from the beginning of next month. The hospitality industry is scheduled to come back to life from early July. 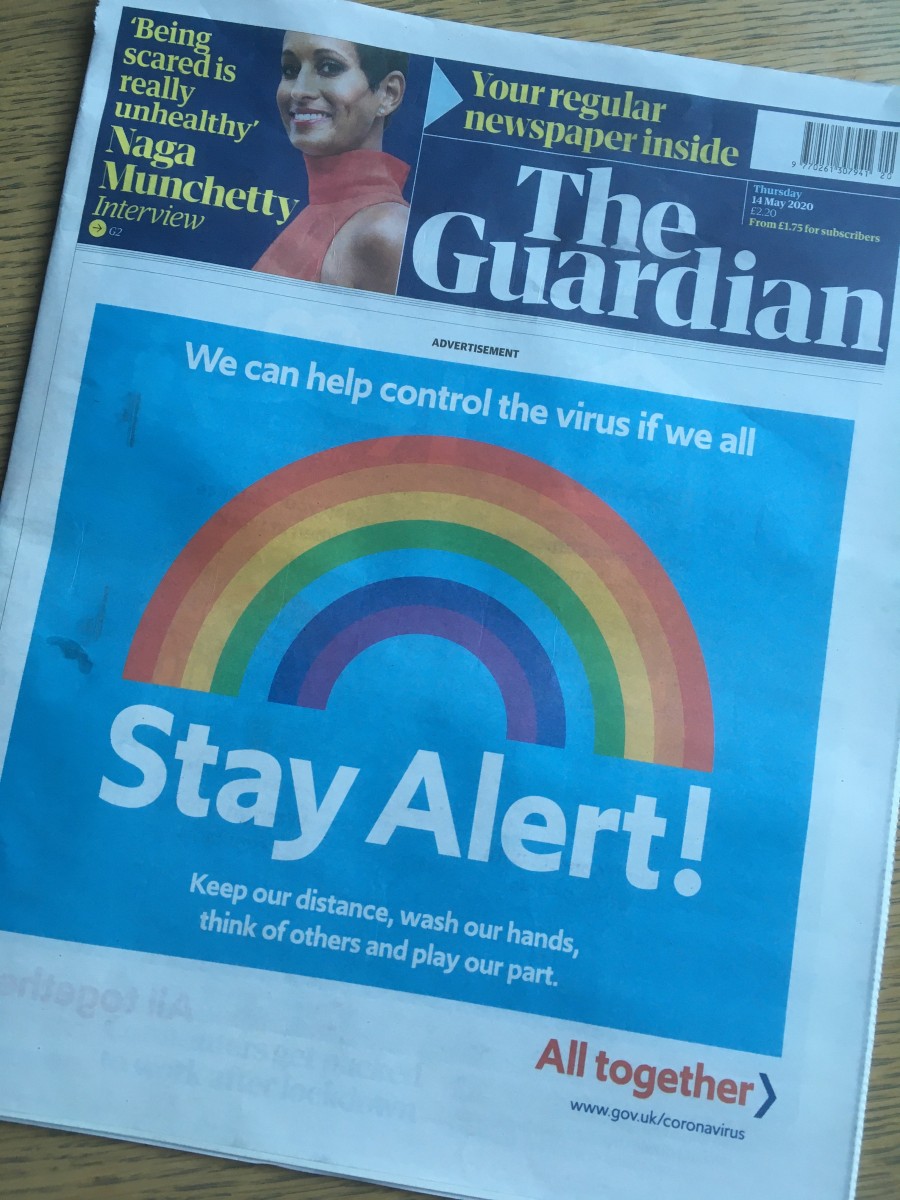 A ‘Stay Alert’ injunction on the front page of The Guardian from the UK government. Photo: Author provided

The change in approach was unveiled in a much-trumpeted prime ministerial broadcast to the nation last Sunday evening – an address which felt hammed up and inadequately prepared. Johnson even got a key point wrong – urging those who couldn’t work from home to consider heading back to work the next morning, even though the guidance on how best to ensure safety in the workplace had not then been published. The following morning a hasty correction was made: “no, don’t go back to work today  …  we meant Wednesday”.

The message was confused, its delivery haphazard and the reasons for the haste in opening up at best opaque. It’s about putting ‘wealth before well-being’ in the words of one critic. The devolved governments in Scotland, Wales and Northern Ireland, which have responsibility in their areas for public health, have refused to follow London’s lead, prompting comment that a prime minister intent on preserving the unity of the UK has succeeded in splitting it.

On Wednesday, Keir Starmer – so much more effective in holding the government to account than his predecessor, Jeremy Corbyn – resumed the attack in Parliament. His focus was on the nursing homes and care centres for the elderly, most privately run, which have felt forgotten and abandoned as the virus rampaged through their sun lounges and dining rooms. At least a third of all Britain’s COVID-19 deaths have been in these residential centres. If for Modi the plight of migrant workers is his weak spot in managing the virus, for Johnson the rapid spread of COVID-19 through care homes is his point of greatest political vulnerability.

Starmer, a senior and well-regarded law officer before entering politics, is more than a match for Johnson’s bluster. ‘The lawyer beating the showman hands down this week’, tweeted the BBC’s studiously neutral political editor as the latest Parliamentary duel was underway.

Johnson won a commanding general election victory just six months ago with the pledge to ‘Get Brexit Done’. On that, at least, he delivered. Britain left the European Union at the end of January. Brexit, the issue which so dominated British politics over the past five years, is barely mentioned these days. The afterglow of managing to extract Britain from the EU might explain why the government appeared so lethargic in its initial response to the pandemic.

When Boris isn’t changing nappies in what spare time he can find away from the cares of state, he may be giving a thought to his wedding (it will be his third), if the virus doesn’t disturb his plans. The feel-good factor of a summer or autumn marriage ceremony may give a boost to Johnson’s public standing. He will need it. COVID-19 may well prove as unforgiving of his political reputation as it has been of the lives of so many of his fellow citizens.