Roman Protasevich is now in a rented flat in the Belarusian capital Minsk. Sofia Sapega, a Russian citizen, was moved to a separate rented flat. 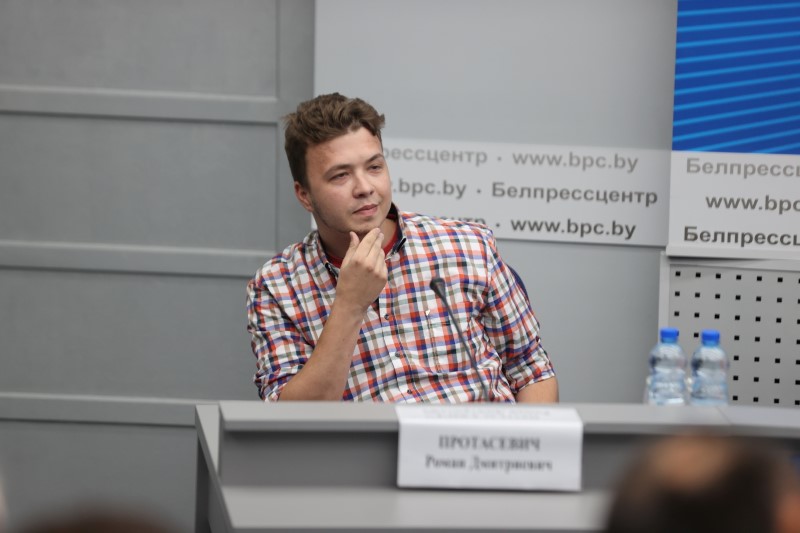 Moscow: An opposition blogger who was arrested after his flight was forced to land in Belarus has been moved from a detention facility to house arrest, an opposition leader and the Belarus prosecution authority said on Friday.

The arrest of Roman Protasevich and his girlfriend Sofia Sapega after Belarusian authorities intercepted their Ryanair flight from Athens to Vilnius on May 23 caused international outrage.

Protasevich is now in a rented flat in the Belarusian capital Minsk, his father Dmitri Protasevich told the BBC. He said the authorities had provided no further information.

Sapega, a Russian citizen, was moved to a separate rented flat, her stepfather told the BBC. The Kremlin said on Friday that Russian diplomats would continue to “guard” her interests. The Kremlin spokesman Dmitry Peskov did not say whether or when Sapega may return to Russia.

Opposition politician Sviatlana Tsikhanouskaya’s office confirmed that both were under house arrest.

“The fact that Roman and Sofia were moved to house arrest and are not in cells any more is good news,” Tsikhanouskaya, who is based in Lithuania, said in a statement. “But house arrest does not mean freedom… They remain hostages.”

Also read: Minutes to Touchdown: The Moment a Belarusian Dissident Knew His Time was Up

The European Union imposed economic sanctions on Belarus on Thursday, targeting its main export industries and access to finance.

Belarusian President Alexander Lukashenko, who faced street protests last year over a presidential election which opponents say was rigged, said the interception was justified to prevent a rebellion. He denies electoral fraud.

Supporters say the accusations against the two are false and dismiss video confessions which they say were made under duress in detention.

The Belarus investigative committee, the law enforcement body charged with prosecuting major crimes, said in a statement on Friday that both Protasevich and Sapega continue their confessions and have pledged cooperation with investigators in exchange for house arrest, which was later granted.

Protasevich’s father was quoted by the BBC as saying that his son and Sapega were “still under the full control of the authorities” and the charges against them had not been dropped.