At Senate Hearing, Christine Blasey Ford Says She Is '100% Sure' Kavanaugh Assaulted Her

Ford told the committee she feared Kavanaugh would rape and accidentally kill her during the alleged assault when both were high school students in Maryland. 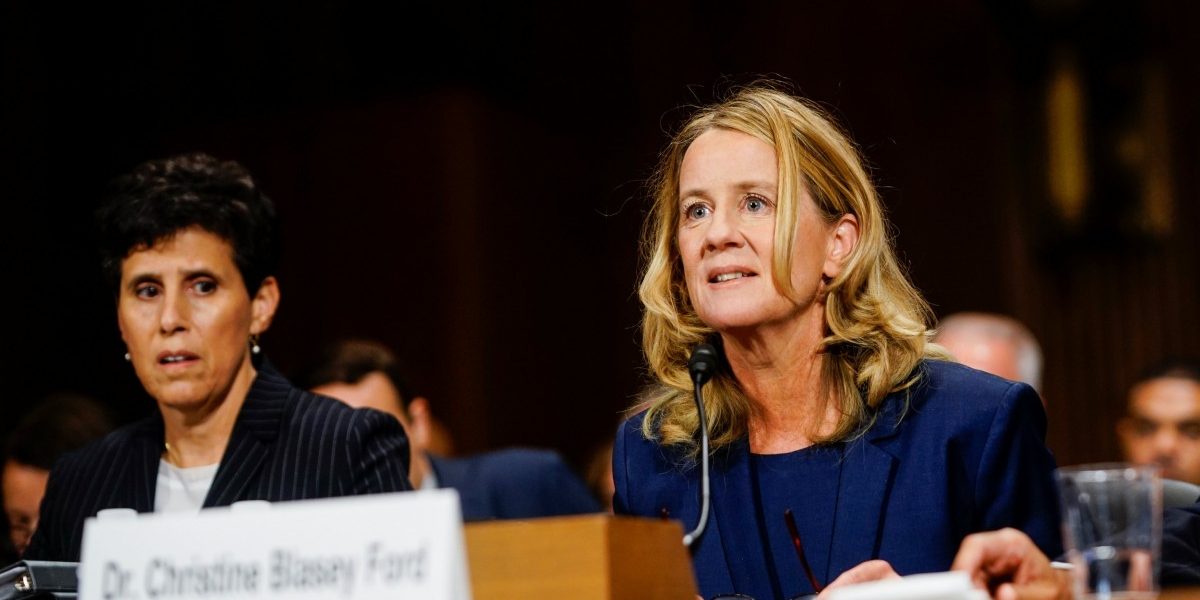 Washington: Fighting to salvage his US Supreme Court nomination, Brett Kavanaugh angrily and tearfully denied on Thursday a university professor’s accusation that he sexually assaulted her 36 years ago and complained about a “political hit” after she told a dramatic Senate hearing she was “100% certain” he did it.

Christine Blasey Ford, her voice sometimes cracking with emotion, appeared in public for the first time to detail her allegation against Kavanaugh, a conservative federal appeals court judge chosen by President Donald Trump for a lifetime job on the top US court.

Ford told the committee she feared Kavanaugh would rape and accidentally kill her during the alleged assault when both were high school students in Maryland.

Kavanaugh testified after Ford finished her appearance, and they were never in the hearing room together.

“I swear today, under oath, before the Senate and the nation, before my family and God, I am innocent of this charge,” Kavanaugh told the Judiciary Committee.

The clash pitted her word against his. Members of the Senate, controlled 51-49 by Trump’s fellow Republicans, must now decide whether to vote to confirm him after the extraordinary nearly nine-hour hearing.

Senate Republicans planned to meet on Thursday night to discuss their next steps. The Judiciary Committee, on which Republicans hold an 11-10 majority, will meet on Friday morning, when several senators said a vote was expected. A senior Republican Senate aide said the first procedural vote in the full 100-member Senate would be held on Saturday.

Four senators who have not taken firm positions on Kavanaugh met separately after the hearing. They were Republicans Susan Collins, Lisa Murkowski and Jeff Flake, along with Democrat Joe Manchin, according to a Senate aide.

The four are seen as swing votes that could decide the outcome of the closely contested nomination.

“I will not be intimidated into withdrawing from this process,” Kavanaugh added.

Writing on Twitter after the hearing, Trump said of Kavanaugh: “His testimony was powerful, honest, and riveting. Democrats’ search and destroy strategy is disgraceful and this process has been a total sham and effort to delay, obstruct, and resist. The Senate must vote!”

Kavanaugh at times choked back tears, especially when he mentioned that his daughter suggested they pray for Ford, when he spoke of his father and when he mentioned women friends who had rallied to support him.

Kavanaugh sharply attacked Democratic senators, calling himself the victim of “a calculated and orchestrated political hit” fuelled by anger on the left at Trump’s 2016 election win over Democrat Hillary Clinton, his conservative judicial record and revenge on behalf of Clinton and her husband, former President Bill Clinton.

Ford, a psychology professor at Palo Alto University in California, said over four hours of testimony that a drunken Kavanaugh attacked her and tried to remove her clothing at a gathering of teenagers when he was 17 years old and she was 15 in 1982.

The hearing, which has riveted Americans and intensified the political polarisation in the United States, occurred against the backdrop of the #MeToo movement against sexual harassment and assault.

“With what degree of certainty do you believe Brett Kavanaugh assaulted you?” Democratic Senator Dick Durbin asked Ford.

“One hundred percent,” she replied, remaining firm and unruffled even under questioning by a sex crimes prosecutor hired by the committee’s Republicans.

‘Nothing short of heroic’

For his part, Kavanaugh testified he was “100% certain” none of the alleged incidents of sexual misconduct occurred.

Ford said: “Absolutely not” when Democratic Senator Dianne Feinstein asked her if it could be a case of mistaken identity, as Kavanaugh has suggested.

Democrats lauded Ford’s testimony as credible, brave and, in the words of Senator Cory Booker, “nothing short of heroic.”

“I want to thank you for your courage. And I want to tell you I believe you. … And I believe many Americans across the country believe you,” Democratic Senator Kamala Harris said.

While some Republicans and Trump have called the allegations by Ford and the two other women part of a smear campaign, Ford told the committee she had no political motivation, adding: “I am an independent person and I am no one’s pawn.”

Ford was seated at a table in the packed hearing room flanked by her lawyers, facing a bank of senators. She told the senators she was “terrified” to testify but felt it was her civic duty to come forward.

“Brett groped me and tried to take off my clothes. He had a hard time because he was very inebriated and because I was wearing a one-piece bathing suit under my clothing. I believed he was going to rape me. I tried to yell for help,” Ford said, adding that Kavanaugh and a friend of his, Mark Judge, were “drunkenly laughing during the attack.”

Democratic senators sought to score political points during their five minutes apiece of questioning Ford. The panel’s Republican senators, all men, did not question her, assigning that task to Rachel Mitchell, a sex crimes prosecutor.

While Mitchell probed Ford’s account looking for gaps, her questioning seemed disjointed. She took turns with the Democratic senators to ask questions in five-minute segments, disrupting her flow. During Kavanaugh’s testimony, Republican senators sidelined Mitchell and asked their own questions.

The controversy has unfolded weeks before the November 6 congressional elections in which Democrats are trying to seize majority control of Congress from the Republicans.

If he is confirmed, Kavanaugh would cement conservative control of the nation’s highest court, advancing Trump’s push to shift it and the broader federal judiciary to the right.

Kavanaugh, sitting alone at the witness table, said he wanted to testify as soon as Ford’s allegation emerged last week and was not surprised other allegations followed.

“In those 10 long days, as was predictable and as I predicted, my family and my name have been totally and permanently destroyed by vicious and false additional accusations,” he said.

The delay in scheduling a hearing “has been horrible to me and my family, to the Supreme Court and to the country,” Kavanaugh said.

Looking sombre, Kavanaugh was accompanied by his wife as he entered the hearing room. A handful of moderate Republican senators, who have not announced whether or not they support Kavanaugh could determine his fate. One of them, Murkowski, told Reuters: “I find Dr. Ford’s testimony to be credible.”

Kavanaugh repeatedly tangled with Democratic senators, interrupting several of them, including Feinstein and Amy Klobuchar, during testy exchanges.

When Klobuchar asked him about his teenage drinking, he threw the question back at her, asking her whether she had ever been blackout drunk. He later apologised for the question.

Kavanaugh was careful not to denounce Ford, noting he wished her “no ill will.” He said he was not questioning that Ford may have been sexually assaulted by someone in some place at some time, but that he had never assaulted her or anyone.

Some Democrats have called on Kavanaugh to withdraw in light of the allegations. At the hearing, Republican Senator Lindsey Graham castigated Democratic senators, seeking to rally Republicans not to abandon the nominee.

“This is the most unethical sham since I’ve been in politics,” Graham said, adding that voting against Kavanaugh would legitimise the attacks on the nominee.

Ford said Kavanaugh put his hand over her mouth to stop her from screaming during the assault. She added: “This was what terrified me the most, and has had the most lasting impact on my life. It was hard for me to breathe, and I thought that Brett was accidentally going to kill me.”

Her strongest memory of the incident, Ford said, was the “uproarious laughter between the two (Kavanaugh and Judge) and their having fun at my expense.” She said the laughter had haunted her ever since.

Two other women, Deborah Ramirez and Julie Swetnick, have accused Kavanaugh of sexual misconduct in the 1980s.

Ramirez accused Kavanaugh of exposing himself during a drunken dormitory party during the 1983-84 academic year when both attended Yale University.

Swetnick said she witnessed efforts by Kavanaugh and others to get girls drunk at parties so they could be raped. She said Kavanaugh was present at a 1982 party where she was raped.

Trump, who has himself faced accusations of sexual misconduct, chose Kavanaugh to succeed Justice Anthony Kennedy, who retired effective in July.