An Indian Leader in the Fight Against Climate Change

For his critics, Rajendra Pachauri was "not a real Nobel Laureate". 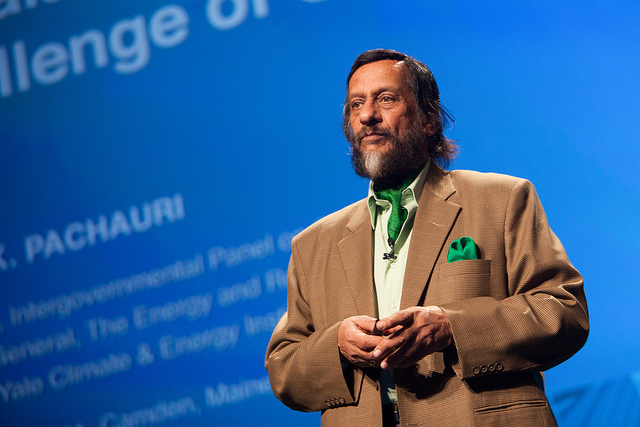 In the 120 years since the Nobel prize was instituted, only 10 Indians have figured among the 904 individuals, and 24 organisations that have received it. Of these 10,  only five have received it for work done in India. And one of these was a lady of Macedonian origin, Mother Teresa.

R.K. Pachauri was one of the remaining  four.  Rarer still, he was the only Indian to head an organisation that was awarded the Nobel Prize — the Inter Governmental Panel on Climate Change.

For his critics, of course, Pachauri was “not a real Nobel Laureate”. “It was the IPCC that got the prize!” they said. “Pachauri was only the courier who picked up the parcel.” Nothing could have been  further from the truth.

In a world that has become one large football stadium, where everyone has an opinion, and insists upon the right to express it, reducing the babble to a focussed discussion of policy and a coherent set of recommendations is perhaps the most difficult function any human being can perform.

Just how successfully Pachauri did this may be judged from not only from the contents of the IPCCs Fourth Assessment Report, which shook the world out of its complacency in 2007, but from the fact that the world’s leaders asked him to stay on and prepare the next report as well. It is largely thanks to him that the IPCCs reports have become the gold standard against which to measure humanity’s continuing delinquency in the face of Armageddon today.

To understand the full magnitude of Pachauri’s achievement one only needs to look at what went into the making of the IPCC’s Fifth Assessment Report,  which he released in November 2014. To absolutely ensure its comprehensiveness, clarity of message, and credibility, the IPCC first selected 831 experts from 3,598  world-renowned scientists, to be the Lead Authors, Coordinating Lead Authors, and Review Editors for its three working groups and its Task Force. Their preliminary reports were then peer reviewed by thousands of other scientists before a final report was prepared.

It would not be hyperbole to claim that, in all, more than 25,000 scientists from every major climate-related discipline, belonging to well over a thousand universities and research centres spread across the globe, took part in the preparation of the Working Group  reports.

Their three reports had then to be synthesised into a single consolidated report , and that in turn boiled down  into a Summary for Policy Makers to which  193 governments would have to agree. This required an endless round of meetings with heads of governments of large and small nations, rich and poor nations, oil importers and oil exporters, all facing divergent domestic compulsions and under no obligation to give ground to accommodate the concerns of others.

It was a measure of Pachauri’s success that no major dispute ever surfaced over the contents of the Fourth and Fifth Assessment reports. The combination of tact and charm  that made this possible explains why he remained the head of the IPCC for the preparation of its fifth report after having prepared the Fourth.

Also Read: ‘Overpowering Patriarchy at Work When It Comes to Workplace Sexual Harassment’

It will be decades before Pachauri’s full contribution to safeguarding the future of the world is fully appreciated. When the IPCC’s fourth Assessment Report was published, the mortal threat posed by global warming had barely dented the thinking of the world.

Today, 12 years and two more IPCC reports later, only a handful of diehard sceptics still do not believe that the world has to stop burning fossil fuels within the next fifty years if humanity is to survive into the 23rd century. Thirty-one countries have joined an International Solar Alliance and committed themselves to setting up no more coal fired power plants; pioneer companies have begun to convert waste biomass into transport fuels.

Across the world governments have ceased to minimise the threat of climate change and are actively seeking ways to end the use of fossil fuels well before the end of this century. The IPCC deserves the lion’s credit for bringing about this seismic, life-saving shift in perception. Rajendra Pachauri’s role, as catalyst that created it, must not be forgotten.

In a letter to The Wire’s Public Editor, Vrinda Grover writes:

My concern however, is that this piece while talking about Pachauri’s work, entirely suppresses the fact that multiple women have spoken out about being sexually harassed by him. At the time of his demise Pachauri was facing criminal prosecution for the crimes of sexual harassment, stalking, outraging modesty and criminal intimidation, which he committed in the course of his work, and by taking advantage of his professional position, both in TERI at India and while being Chair of the IPCC.

The multiple allegations of sexual harassment and the defamation suit that RKP filed against me, as I am the lawyer for two of the women, and against these two women survivors, have been reported widely, including by The Wire–

The Wire’s report about Pachauri’s passing away too includes these facts- https://thewire.in/environment/rk-pachauri-passes-away

As you may know, Prem Shankar Jha was a long standing friend of RK Pachauri. In 2017, Jha deposed as a witness in support of RK Pachauri in the defamation suit that he filed against me and the two other women. As an experienced journalist and guest writer, Jha ought to have disclosed this fact.

In these circumstances, does an article, even an opinion piece by a guest writer, which does not even refer to these allegations not amount to an erasure of this aspect of RK Pachauri’s professional reputation?

It may be said that Prem Shankar Jha is only writing about Pachauri’s contribution to the 4th and 5th IPCC Report and is under no obligation to mention the sexual harassment allegations.  While the piece focuses on Pachauri and the IPCC, its tone and tenor is that of an obituary, a paean to a “leader”.

It says “It will be decades before Pachauri’s full contribution to safeguarding the future of the world is fully appreciated.” Surely this statement can only be made by concealing the fact of multiple sexual harassment allegations.

As one journalist pointed out on twitter, RK Pachauri’s professional “legacy”  is as much about deterring several women from pursuing their career’s in the climate change field, as much as it is about the accomplishments listed by Jha.

The Wire claims that it is “firmly committed to the public interest and democratic values.” Can an opinion piece that is at best glaringly incomplete and at worst suppressing the issue of sexual harassment be considered worthy of publication?

Sexual harassment as we know is not a private dispute, or a tangential issue, but one of public interest and importance, and in the recent past public debate has once again informed us of the significance and centrality of the issue, especially the ways in which it impinges upon women’s lives and work.

Note from the Editors:

A number of readers have objected to Prem Shankar Jha’s opinion piece above for not referring to the sexual harassment allegations against Pachauri.

Jha is a regular columnist with The Wire. As a matter of editorial policy, the opinions expressed by opinion writers are their own.

The published opinion piece dealt only with Pachauri’s climate change work as part of IPCC, on whose behalf he received the Nobel prize. It was not intended to be, or presented as, an assessment of Pachauri’s life and work, where one would naturally expect some critical reference to the sexual harassment allegations.

The obituary which The Wire published on February 13, four days before Jha’s article, not only provided those details but devoted roughly half its length to them. The obituary story was included in Jha’s article as an  ‘Also Read’ recommendation, and is appended below for quick reference.

The Wire will also be separately publishing some of the responses Jha’s piece has elicited.

The winner of many awards and honours for his work in sustainable energy solutions, Pachauri had been named by at least two women for alleged sexual harassment.

New Delhi: Former TERI chief R.K. Pachauri has passed away. He was 79.

Pachauri, who had been admitted to the Escorts Heart Institute in the national capital had suffered from a prolonged cardiac ailment. He was put on life support on Tuesday and underwent an open heart surgery at the hospital, PTI quoted sources as having said.

He passed away at his residence in Delhi.

It is with immense sadness that we announce the passing away of Dr RK Pachauri, the Founder Director of TERI. The entire TERI family stands with the family of Dr Pachauri in this hour of grief.
(1/4) 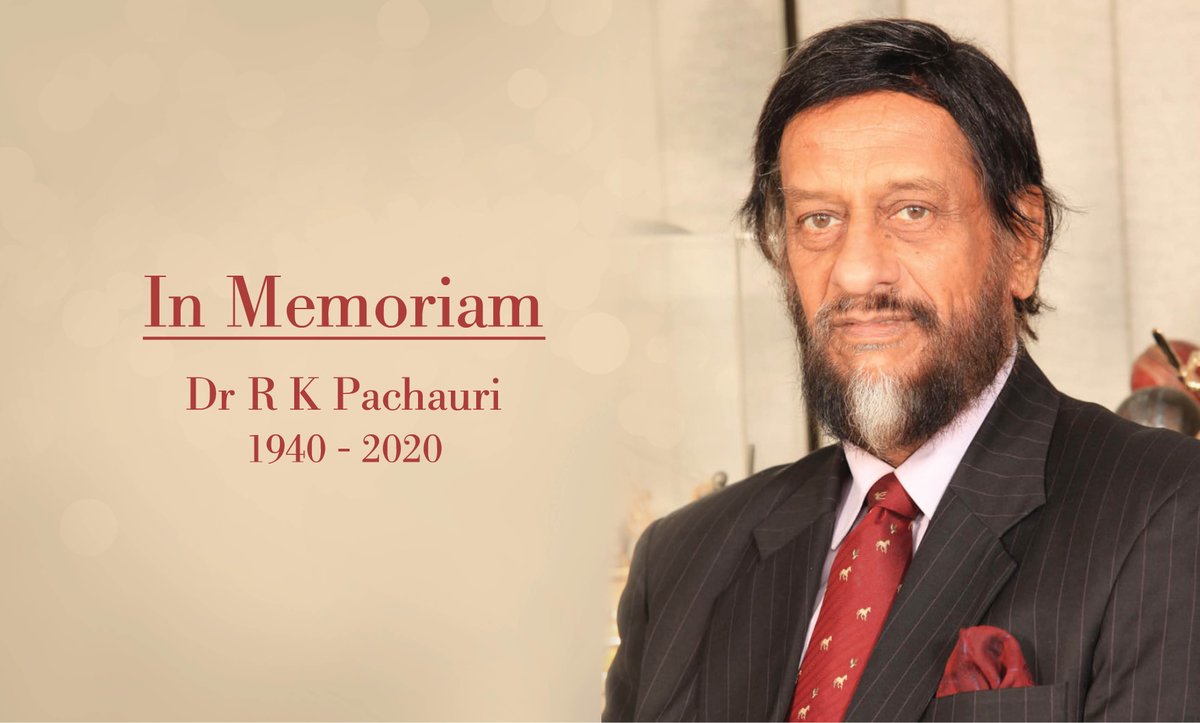 123 people are talking about this
The environmentalist had suffered a heart stroke in Mexico in July last year, PTI has further reported.

Pachauri had to step down from his position in TERI, an organisation he founded, after he was accused of sexually harassing a former woman colleague.

A district court had in October 2018 framed molestation charges against Pachauri, who had repeatedly denied the allegations levelled against him. During the court hearings, Pachauri had sought a speedy trial saying he and his family were suffering from hardship since 2015, when an FIR was lodged in the matter. A second woman had come forward with similar charges against him in the meantime.

After the FIR was registered in February 2015, Pachauri was given anticipatory bail the next month.

The Caravan had published an investigative report on allegations that Pachauri had systematically used his position to sexually harass several women employees of TERI.

Pachauri had, in the course of the proceedings, filed a civil suit against lawyer Vrinda Grover for her efforts to get other women to come forward in the case.

Pachauri was the chairman of the Intergovernmental Panel on Climate Change (IPCC) from 2002 till February 2015. The IPCC was awarded the Nobel Peace Prize during his tenure.

The IPCC is sorry to hear of the death of its former Chair Rajendra K. Pachauri 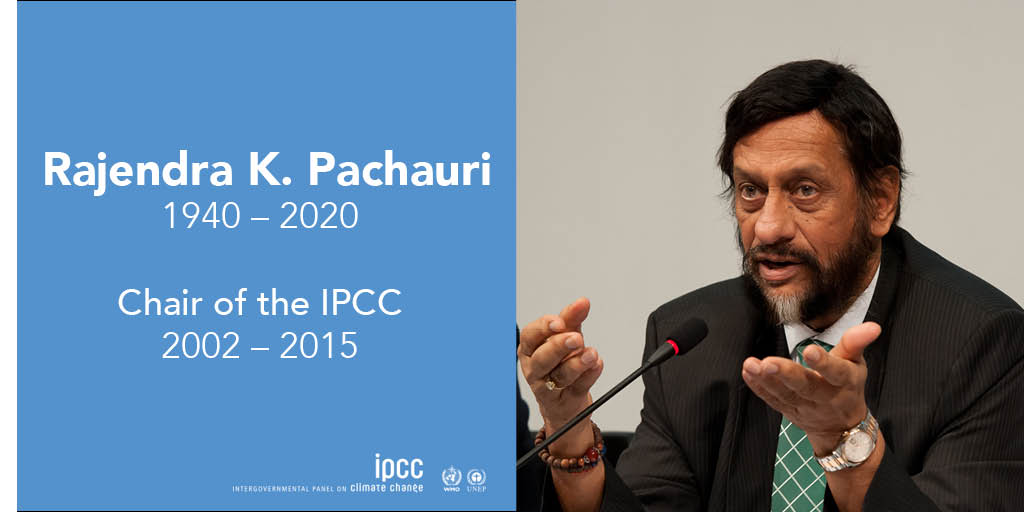 127 people are talking about this

“Dr Pachauri’s contribution to global sustainable development is unparalleled. His leadership of the IPCC laid the ground for climate change conversations today,” said TERI chairman Nitin Desai in a tweet.

A Padma Bhushan winner, Pachauri conceptualised and launched the ‘Lighting a Billion Lives’ initiative in 2008, to facilitate clean energy access for all.

He is survived by his wife and two children.

“His courageous leadership allowed climate change to be recognised world over as the most pressing issue confronting the world and launched a new era of international deliberations and actions,” his family told PTI.