A Terrible US Deal With the Taliban Delayed

While Trump has drawn bipartisan criticism within the US for coming up with the time and location of the now-scuttled accord, Afghanistan will now have to get its domestic and diplomatic ducks in a row.

Afghan former President Hamid Karzai and other participants pray during a conference arranged by the Afghan diaspora in Moscow, February 5, 2019. Photo: Reuters/Maxim Shemetov

US President Donald Trump has cancelled what had appeared to be an imminent deal with the Afghan Taliban.

In a series of tweets over the weekend, Trump blasted the Taliban for not agreeing to a ceasefire and continuing to kill in order to buttress their negotiating position. He cited the death of a US soldier last week as the reason for his decision.

But the real bombshell was that he had a meeting planned at the Camp David presidential retreat literally on the eve of the 18th anniversary of the 9/11 attacks. Granted that Afghanistan President Dr Ashraf Ghani was supposed to be there as well, the whole idea is still deeply disconcerting.

….only made it worse! If they cannot agree to a ceasefire during these very important peace talks, and would even kill 12 innocent people, then they probably don’t have the power to negotiate a meaningful agreement anyway. How many more decades are they willing to fight?

An eye on the Nobel?

Camp David has a long history of hosting world leaders, including formidable Soviet adversaries like Nikita Khrushchev and Leonid Brezhnev. A not-so-direct foe like the Palestinian leader Yasser Arafat was also hosted there by President Bill Clinton, along with the Israeli premier Ehud Barak.

But the presidential retreat’s highest point perhaps was President Jimmy Carter bringing together the Egyptian President Anwar Sadat and Israeli Prime Minister Menachem Begin for a two-week secretive marathon meeting that culminated in the famous 1978 Camp David Accords. The latter two leaders received the Nobel Peace Prize that year, while Carter got it in 2002 for his peace efforts worldwide.

No US leader has, however, hosted any individual or group that has gone to a direct war against America – let alone a terrorist group that had harboured the masterminds of the 9/11 attacks and has killed and maimed thousands of US service persons since.

While the latest US overtures to Taliban have been reminiscent of the ignominious defeat in Vietnam, even the peace accord ending that war was signed at Paris. Trump has already drawn bipartisan criticism within the US for coming up with the time and location of the now-scuttled accord.

While the details of the things leading up to the planned tripartite meeting are still sketchy, in all likelihood Trump wanted this supposed grand finale of the year-long US parleys with the Taliban to be about him, not Afghanistan. For all one knows, with an eye on the Nobel, he might have been trying to one-up Carter and Clinton.

And the US special envoy, Zalmay Khalilzad, was too willing to oblige. Not exactly known for speaking truth to power, Khalilzad seems to be have been telling the US president what he wanted to hear and, in the process, had cut the Afghan people and the government completely out of it. Khalilzad had also been hinting at a transitional or interim government in lieu of the already delayed presidential elections in Afghanistan.

The Camp David idea could not have happened at the spur of the moment, though both the Taliban and the Afghan government probably got the invites at a very short notice. Afghan media was reporting Dr. Ghani’s impending travel to the US, a couple of days before the Trump tweets. Dr. Ghani likely found himself between a rock and a hard place but opted to take the plunge after all.

The Afghan government is seething with anger over Khalilzad first locking it out of the negotiations room, and then declining to actually hand it a copy of his draft agreement with the Taliban. However, as an Afghan adage goes: ‘qahr e dervish bar jaan e darvish – the anger of the weak is for the weak themselves’; Dr. Ghani agreed to show up without much details in hand.

Afghans have a vivid memory of not just being completely abandoned by the US after the Soviet withdrawal in 1989 but also being left to Pakistan’s devices. They do not wish to give the US an excuse to leave them high and dry yet again. The Afghan security forces are doing most of the fighting against the Taliban but remain dependent on the US for monetary and logistic support.

In fact, the Afghan state would continue to need the US and western support for foreseeable future, something the wily Khalilzad has used as a leverage against it. By accepting the Trump invite to Camp David, Dr. Ghani took a huge gamble. He was about to land into a deal, over the negotiations for which he had no control, and which would essentially have been presented to him as fait accompli. He must have breathed a sigh of relief.

Indications are that the Taliban, who sense victory, did not wish to be in US territory for a deal, which they could easily sign in Doha without the Trump and Ghani shadow looming over them. For the past one year, thanks to Khalilzad’s tactics, the Taliban have virtually made diplomatic hay. They have been leveraging those talks to rub shoulders with diplomats in the full media glare with the Afghan government sulking on the sidelines. 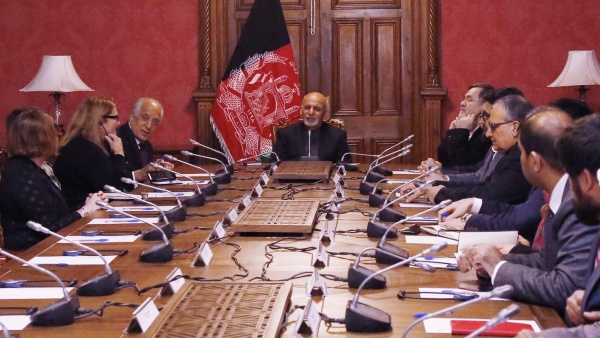 Khalilzad’s ominous shenanigans have simultaneously delegitimised the Afghan government and nearly legitimised the Taliban killers. None of the previous prerequisites for a peace deal – a ceasefire, not insisting on complete US troop withdrawal, talking to the Afghan government – are in play anymore. But had they shown up, the Taliban leaders would have been seen by their cadres as pandering to the US and Afghan leaders in Camp David. The optics would not have suited the Taliban; they are, after all, a ruthless killing machine, not Nobel-chasing peaceniks.

As the subsequent Taliban reaction shows, they remained restrained in their criticism of Trump’s move and haven’t given any inkling that they won’t return to the table. It smacks of increasing confidence on their part, not weakness. And is stoking it is not just their ability to spill more Afghan blood but also the appeasement on Khalilzad’s part that betrayed his desperation. The Taliban have him hooked.

Also read: Trump Sees Kashmir – and Pakistan Too – Through the Prism of Iran

Nine former US envoys wrote that the Khalilzad plan is rushing to failure. Members of the Trump administration, military and intelligence officials have been warning the US president of the pitfalls of Khalilzad scheme for months, but they too had been shut out. In fact, news reports suggest that Trump had overruled Vice President Mike Pence and National Security Advisor John Bolton over the Camp David venue, timing and substance. Secretary of State Mike Pompeo, despite his reluctance to sign the deal himself, appears to be backing Khalilzad’s moves.

Appearing on the Sunday morning talk show circuit, Pompeo was evasive about the future of the talks, troops withdrawal, and terms of the future US engagement with Afghanistan. All indications thus are that Trump pulled the plug on a rotten deal, for the wrong reasons. There is a slim possibility that he might have heeded one or some of the naysayers in his inner circle or to the rising chorus in Washington, DC against the deal with Taliban.

Despite Trump reiterating to the media that talks with the Taliban are dead, as fickle as he has been in his domestic and international dealings, who is to say that something equally terrible could not be back on the anvil again, and soon.

What next for Afghanistan?

The Afghan state and people would have to make the best of an awful situation and get their domestic and diplomatic ducks in a row. The presidential elections, scheduled for September 28, must be held and should be seen as free and fair. The Afghan state would not be able to sustain a round of bickering like the 2014 post-elections wrangling.

The international community does not have any stomach for it either. Flush with fresh political capital, an Afghan leader can and must press for proximity talks, if not direct talks, with the Taliban before agreeing to sign anything. Despite their claims to the contrary, the Taliban remain hugely unpopular in Afghanistan and are unlikely to make transition to a political entity. But if they wish to become part of any future dispensation without blood-letting they would have to agree to ceasefire and participate in the political process.

Also read: How Successful Were the Afghan Peace Talks in Qatar?

The post-elections leadership could make a case with the US to insist on it before, not after a deal. The Afghan proposition should not be for an endless US military presence but for an open-ended military and financial support that helps keep the government and security forces afloat. According the US Congress’ own figures the overwhelming bulk of current US expenditure does not go to the Afghan state but to servicing the US troops and logistics.

While there is an Afghan negotiating team, ostensibly ready to meet the Taliban, the Kabul government would have to ensure that is representative and empowered. The Afghan government should prepare for saying a hard no to a flawed deal.

They are a weak dispensation indeed, but it isn’t like countries in that part of the world are falling over each other to hop on the Trump bandwagon. As desperately as the Afghans need peace, what would be worse is a perpetual civil war imposed on them in the garb of a moth eaten peace deal.

On its part, the US administration must introspect as to why it came perilously close to letting brutal killers have a seat in the Mecca of US diplomacy.