75 Years After Fascism's Defeat, Trump and Others Have Thrown Its Main Lesson to the Wind

For all its flaws, the world system which emerged in 1945 left the door open to deliberation, to access a body of laws and protections – with the memories of the sacrifice made by millions of dead and those who lived to utter those immortal words, “Never Again”. That is now being jeopardised. 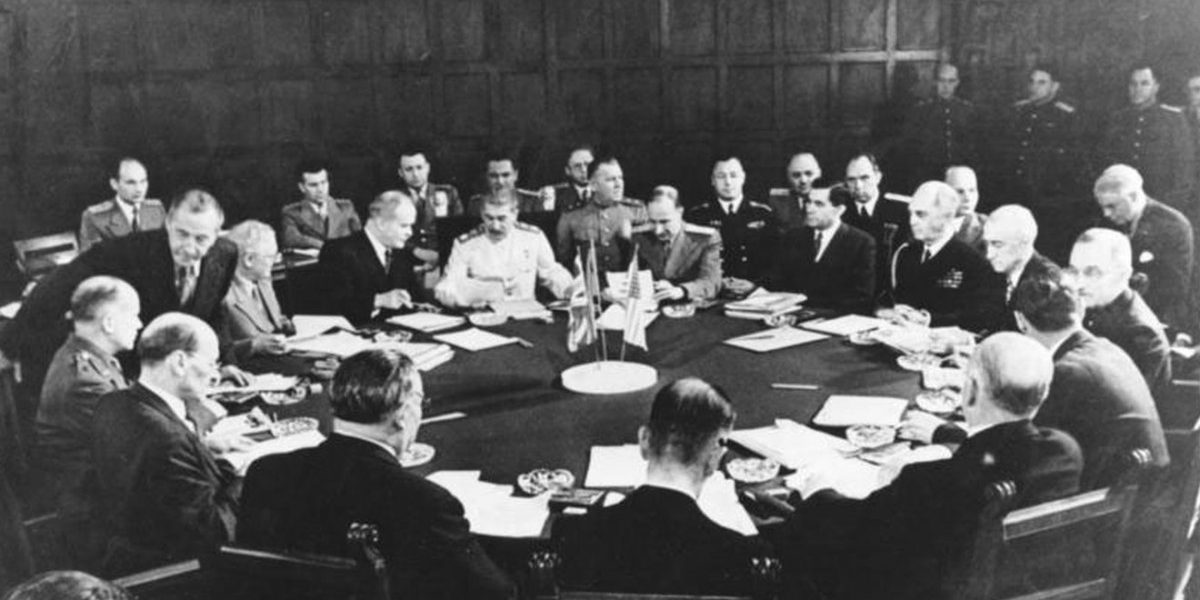 The Potsdam Conference, July 17-August 2, 1945. Generalissimo Joesph Stalin from the Soviet Union is in the Centre, US President Harry Truman on the right and British Prime Minister Clement Atlee on the lift, each surrounded by their high-ranking officials. Photo: Wikimedia

What are the lessons of Victory in Europe (VE) Day 75 years since the defeat of Nazism and, with it,  the entire edifice of theories of racial superiority and inferiority, of white supremacy and the rule of the master race?

It is 75 years since the world repudiated Hitlerism and the principle that “might is right” – since the defeat of an ideology and its industrial-financial sponsors whose ultimate end point was the Holocaust, genocide against the Jewish and other peoples. It is 75 years since the Potsdam Declaration that announced without hesitation or ambiguity the goal of permanently extirpating Hitlerism, the Nazi party doctrine, all its clubs and institutions and culture.

We mark on VE Day the sacrifice of the 60 million killed in the most destructive war in history – dead due to an overt and bellicose ideology of hate backed by the machinery of modern industrial mass murder.

Nazism and fascism rarely ascend to power without the initial and continued support of the industrial and financial plutocrats and the parties they back. Indeed, those forces survived the war and prospered in the peace.

Look around today – in Germany, the Alternative for Germany declares Hitler incidental in the architecture of the Holocaust, states its weariness over war guilt and wants a new drive to make Germany great again. And mainstream political parties compromise, connive, cajole and co-opt the rhetoric and policies of xenophobia and islamophobia.

In France, the fascists of the National Front – whatever they may call themselves today – parade the politics of divide and rule, of scapegoating refugees from war, repression and poverty. They punish those who have washed up on Europe’s shores due to what those European great powers have done in and to the peoples of the Middle East.

We see Viktor Orbán in Hungary openly lauding the virtues of the authoritarian bigot and the jackboot, declaring opponents and critics “enemies of the people”.

Prime Minister Narendra Modi in India plays the politics of Islamophobia and Hindutva to divide and rule a country whose people had united to defeat colonial rule and create a republic in which everyone would be equal regardless of religion, caste and language.

The US leads the descent

In the United States, President Donald Trump calls Neo-Nazis “good people” and equates them with anti-fascists upholding a key lesson of WWII – that Nazis have no right to promote doctrines of racial supremacy. When extreme right-wing militiamen, white supremacists, and neo-Nazis adorned with swastikas stormed the Michigan capitol building while it was in session, Trump demanded that the state governor do a deal with these “good people”. i.e. appease the aggressors.

As Michigan Congresswoman Rashida Tlaib tweeted, unarmed black men get shot by the police for merely being, while armed white men wearing swastikas and carrying nooses got away without even being arrested. The link between the mainstream Republican party, the far right, and the fascistic alt-right is an enabling one. Its glue is the discredited doctrine of fascist appeasement.

President Trump refers to “shithole” African countries while praising Norwegians. His networks include the Ku Klux Klan, neo-Nazis and the Alt Right from Stephen Bannon to Breitbart, and the eugenicists and “peaceful ethnic cleansing” advocates of the National Policy Institute. This network is backed by the GOP – the long-gone party of Lincoln that freed the slaves and defeated the hated slave states of the ‘stars and bars’ Confederacy.

We see the Trump administration violating the US constitution and rule of law at home and abroad, recklessly endangering the lives of Americans in his horrific mishandling of the COVID-19 pandemic – which is literally killing thousands, particularly working-class people. He is shifting attention away from his own catastrophic failures towards a xenophobic and openly racist campaign against China, “the Chinese virus”, or the “Wuhan virus”, a barely disguised return of the “yellow peril” politics that stretches deep in to American history.

Trump openly denounces the progressive effects of the Second World War – especially the United Nations and, most recently the World Health Organisation – as worthless because they dare to be independent and internationalist as against the selfish nationalism of “America First”. Where the UN and WHO build bridges, open doors, encourage dialogue, and the peaceful resolution of disputes, Trump went to the UN to threaten genocide in Iran and North Korea. Trump builds walls and barriers and tariffs, and mental fortresses. The Trump administration breaks US and international laws on asylum and refugees, separates children from their parents, and has presided over the building of detention camps at the US-Mexico border.

Of course, the post-1945 order was never anywhere near perfect but it was a step forward in human progress towards recognising the rights of peoples across the world to their humanity, representation, and nationhood. It recognised the obsolescence of national rivalry and conflict in the face of a shrinking planet, the end of empire, the arms race and utter discrediting of colonial and racial hierarchies. The spirit of the UN was towards peace and against war, against the principle of might is right.

The promise of the United Nations

The UN system had and has many flaws – some fundamental – but the underlying demand of the world’s peoples, their aspirations, were for peace, progress, material and cultural betterment. That represented a broad inclusive and cooperative project on a global scale, and not the politics of racial or religious or national superiority.

But even as the great powers ‘played’ the world’s people and ‘managed’ their lofty aspirations, the international system which emerged after the Second World War was an improvement on what had gone before.

No doubt, the American foreign policy establishment – the entire network of Wilsonians backed by the ‘arsenal of democracy’ – was driven by its desire to use the newly-formed international institutions, headquartered in New York and Washington, to rule the planet. For the British ruling class, the architecture of internationalism would help its move towards an Anglo-American alliance in which the open and now untenable oppressions of a discredited and unworkable colonial system would make way for the softer depredation and structural violence of “development” of the Third World.

The seeds of the undermining of the progressivism of the UN system were there in the darker motives of its great power founders. The more just new world order was radically different but embedded in it were the politics and interests of the most powerful – enveloped within organisations dedicated to openness and representation of all. This meant and means, in principle and in practice, that the door was open to discussion, deliberation, to access a body of laws and protections – with the memories of the sacrifices made by millions of dead and those who lived to utter those immortal words, “Never Again”.

For the ruling establishments in the West, VE Day is a nationalistic celebration – note how in the West, Russia’s outsized contribution to the defeat of fascism is downplayed, let alone the sacrifices of the millions all around the world who fought against German, Italian and Japanese militarism. But at its core, VE Day is the story of the millions of ordinary working men and women of all races and nationalities who came together to defeat a murderous ideology of racial hierarchy, class oppression and industrialised war and violence. They vowed to build a world better than that of the post-1918 period – with its devastating depression of the 1930s, the Amritsar massacre, Jim Crow racial violence and segregation, the politics and horror of the master race and the politics of divide and rule with its scapegoating of minorities.

To my mind, the Potsdam declaration of 1945 put it best. So on VE Day, we remember Potsdam, and the chief lessons of World War Two:

“To destroy the National Socialist Party and its affiliated and supervised organizations, to dissolve all Nazi institutions, to insure that they are not revived in any form, and to prevent all Nazi and militarist activity or propaganda.

“To prepare for the eventual reconstruction of German political life on a democratic basis and for eventual peaceful cooperation in international life by Germany.

“All Nazi laws which provided the basis of the Hitler regime or established discrimination on grounds of race, creed, or political opinion shall be abolished. No such discriminations, whether legal, administrative or otherwise, shall be tolerated.”