'Zabardasti': Transcript of Videos Shows Hathras Woman Spoke of Rape From Day One

Videos circulated by BJP leaders intent on suggesting the woman was not raped actually show her saying the attackers strangled her because she resisted their efforts to force themselves on her. 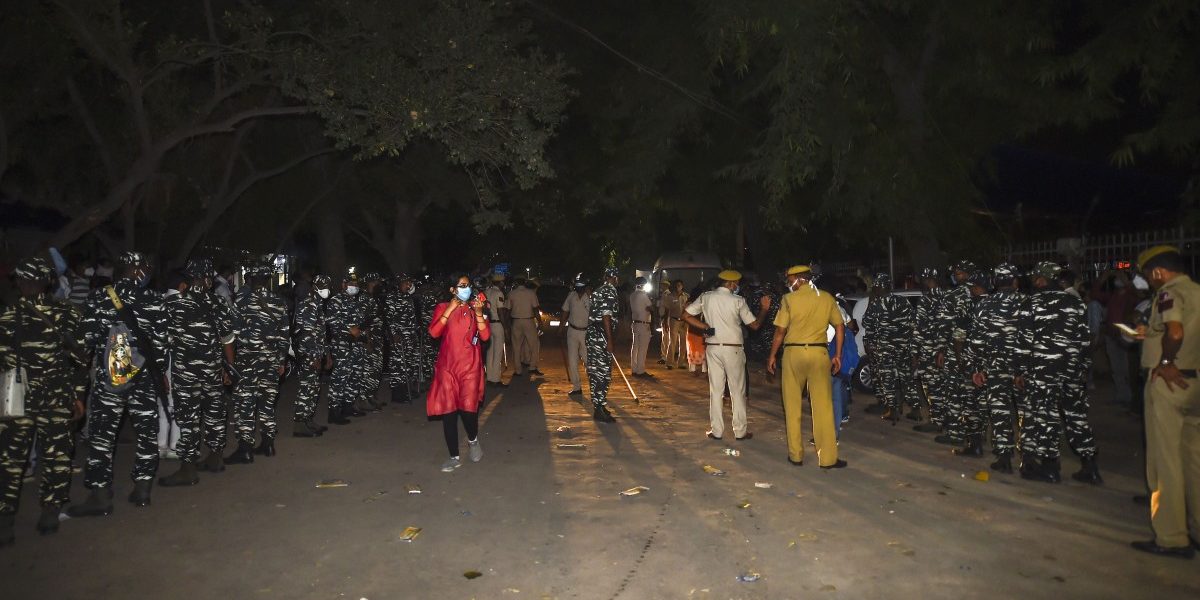 New Delhi: There are three short videos circulating the internet in which the 19-year-old Dalit woman from Boolgarhi village, Hathras, Uttar Pradesh, who was gang-raped, allegedly by four ‘upper caste’ men, on September 14, speaks about her ordeal.

The videos cannot legally be shown by the media as the law prohibits the disclosure of the identity of a rape victim who has died, unless her parents or next of kin authorise this via an official process. But their contents assume tremendous significance in the face of the Yogi Adityanath government’s official claim that the woman was not raped, and its demand that her relatives be subjected to ‘narco analysis’ – a dubious method normally prescribed for crime suspects and not victims and their families.

It is not known who shot these videos or even where and when they were made. But though two of the three videos have been posted on Twitter by Bharatiya Janata Party functionaries to make the case that the Hathras victim does not speak about being raped on the day of the crime, the audio and transcript of her statements make it crystal clear that she very much does. The third video, recorded in a hospital setting at a later date, also leaves no doubt about the nature of the crime she describes.

Also read: BJP IT Cell’s Amit Malviya Tweets Video of Hathras Victim to Claim She Was Not Raped

While the woman also made a dying declaration to a magistrate on September 22 in which she said that she had been raped and identified four men as the attackers, the UP police have sought to undercut that statement by claiming she did not mention she was raped when she first went to the police on September 14. The transcript of two of the videos – which appear to have been shot on September 14 at what seems to be Chandpa police station and a local clinic in Hathras – flatly contradicts this claim.

The videos begin and end abruptly so their transcripts at best constitute a fragment of what the woman said and not the complete record.

But even if they have been arbitrarily shortened or edited, what the videos contain clearly establishes the fact that the victim had spoken about rape and named some of the attackers both in a police and hospital setting on day one. And yet the police did not get the mandatory forensic examination in the case of sexual violence conducted promptly. It was not until September 22 that this was conducted – eight days after the crime – by which time the probability of finding evidence was already zero.

We are providing below the transcript of the three videos in which the woman describes what happened to her. In deference to the law, we are not uploading the videos or providing links to where they might be found.

In this video, first shared on Twitter by the head of the BJP’s IT cell, Amit Malviya, the victim is seen wearing the same clothes that she is seen wearing in another video that has been shown, in a blurred fashion, on Zee TV, where she is prone on a platform, in a police station (presumably Chandpa PS), her body twisted, while policemen calmly photograph her and stand around. That video was apparently recorded shortly after the incident.

Malviya claimed in his tweet that this video is from outside the AMU Hospital (JNMCH). In all likelihood, it was shot in the Chandpa police station, given the cement platform and the position of her body.

The woman is in great distress, and seems a little dazed, which makes it more likely that this was shortly after the attack.

VICTIM: Hai gala daba diya (In pain – ‘He strangled me’)

OFF SCREEN MALE VOICE: Kyon daba diya batao (‘Why did they strangle you?’)

VICTIM: Zabardasti nahin karne di (In a muted voice – ‘I didn’t want him to force himself on me’ – here ‘zabardasti’ is the word for rape)

OFF SCREEN MALE VOICE: Kyon daba diya batao (‘Tell us, why did he strangle you’)

VICTIM: (this time, louder and clearer) Kyon – maine zabardasti nahin karne di, indistinct (‘I resisted him while he was trying to force himself on me’)

OFF SCREEN MALE VOICE: Kaise dabaya gala? (‘How did he strangle you?’)

VICTIM: Haathon se (‘With his hands’)

ANOTHER OFF SCREEN MALE VOICE:  Aur kahin chot hai? (‘Are you injured anywhere else?’)

VICTIM: Nahin gale mein. Says something more about her throat/neck (‘No in my throat, neck’ – she is clearly in a lot of pain in her throat, neck area, which is what she is focusing on)

The victim shows her tongue

Then the man asks her where her father was. She says, “Papa mere seedhai. Seedhe mere roj ka karma hai’

Someone asks the female offscreen voice (the mother) where she (mother) was, and the mother says (in dialect) that she was close by.

In this video, shared on Twitter by C.T. Nirmal Kumar, state convenor IT and social media for the BJP in Tamil Nadu, the woman is still wearing the same clothes that she was in the first video but is no longer at the police station but some kind of medical facility, where this video was likely recorded.

VICTIM: Sandeep ne. (‘Sandeep did it’)

VICTIM: Sandeep ne. (‘Sandeep did it’)

VICTIM: Koi baat nahin. Ham to ghaas lene gaye they. (‘Nothing. We had gone to collect grass’)

OFF-SCREEN FEMALE VOICE (Possibly of the woman in red sari whose hand is seen holding the railing of the bed – most probably mother of the victim): Voh to chal hi rahi hai. (‘That’s been going on’, referring to the enmity)

VICTIM: (indistinct words, possibly something about money – the word ‘paise’ can possibly be heard)

This video was clearly taken in a hospital setting, perhaps the JNMCH hospital in Aligarh. The victim is wearing some kind of neck brace. and has a plastic transparent ventilator type/oxygen mask on her face. The date of this recording is not known.

MALE VOICE: Ek baar aur rape karne ki koshish ki thi? (‘They had tried to rape you one other time?’)

MALE VOICE: Accha is se pehle, rape karne ki koshish ki thi? (‘Okay, so they tried to rape you one other time?’)

VICTIM: Main vahaan se bhaag aayi. (‘I ran away from there’)

VICTIM: Phir mujhko dekh ke kah raha hai, Ravi, “Kuch hua hai ki nahin?” (‘Then once he looked at me, Ravi did, and said “Has anything happened?”’)

VICTIM: “…Phone karke” (She continues quoting, Ravi saying “Phone him and ask him”)

VICTIM: Haan, to main samajh gayi, ke miley huey hain… (‘Yes. So I understood. They’re in it together…’)

MALE VOICE: Yeh donon miley hue hain? (‘Both of them are in it together?’)

MALE VOICE: To us samay to bach gaye aap. Phir? (‘So that time you escaped. Then?’)

VICTIM: Phir, us din hua (‘Then, it happened that day’)

MALE VOICE: Us din, jis din aap ke chot lagi hai. Us din rape hua hai? (On that day, when you got hurt [Referring to September 14] ‘That day you were raped?’)

MALE VOICE: Accha, donon ne kiya tha, ki koi aur bhi tha? (‘Okay. Did both of them do it? Were there other people as well?’)

VICTIM: Voh donon they…Aur baaki sab bhaag gaye they. (‘Both of them…The others ran away’)

MALE VOICE: Accha baaki sab bhag gaye they? (‘Okay. All the others ran away?’)

MALE VOICE: To Mummy ko dekh ke bhaag gaye they? (‘So they saw your mother and ran away?’)

MALE VOICE: To aap us samay hosh mein they? (‘Were you conscious at that time?’)

VICTIM: Thoda sa hosh tha (‘I was a little conscious’)

MALE VOICE: To rape hua hai aap ke saath? (‘So you were raped?’)

MALE VOICE: Uske baad kya kiya? (‘What happened after that?’ or, ‘What did you do after that?’)

The recording cuts off here.