Chief minister Pinarayi Vijayan confirmed the women's visit, adding that it was the constitutional obligation of the government to provide security. Thousands of women took a pledge while participating in the women’s wall against communalism and gender discrimination in Kochi on 1 January. Credit: PTI

Kochi: It might have taken 96 nagging days after the historical verdict by the Supreme Court of India, but the moment did arrive. Two women of menstruating age set foot in the Sabarimala sannidhanam early on Wednesday morning.

Bindu Hariharan (42), an assistant professor at the School of Legal Studies, University of Kannur, and Kanakadurga (44), a Kerala government employee, were the two women who made history.

It was no coincidence that this happened close on the heels of the ‘Women Wall’ organised by the government of Kerala to reclaim the values of renaissance. Around five million women had joined hands to form a 627-kilometre long wall across the state on the new year, which, according to the regional and national media, was a grand success.

Bindu and Kanakadurga reached Pamba at around by 2 am. They were accompanied by plainclothes police during the trek to the shrine. Both had attempted to visit the shrine on December 24, 2018, resulting in huge protest by the members of right wing groups. They had been admitted to the Medical College Hospital in Kottayam after Kanakadurga felt fatigue. The police had promised to arrange security for them after January 1.

“We reached Pamba with some male friends by dawn. The police honoured their promise and provided us security by accompanying us to the shrine. We proceeded as any other ordinary devotee, none of the fellow devotees protested or were even bothered by our presence,” Bindu said.

Not just the media, but even the policemen on duty at the shrine did not get wind of their visit until they reached near the sanctum sanctorum. Only some top police officials (including the state police chief, Trivandrum range IG and district police chief of Kottayam) and the five or six policemen who accompanied them had prior knowledge.

Bindu and Kanakadurga were taken through the gate which is used by the temple staffers only, avoiding the usual path of the 18 sacred steps. Chief minister Pinarayi Vijayan confirmed the women’s visit, adding that it was the constitutional obligation of the government to provide security.

After the regional media flashed the news with the video clips shared by the women, confusion loomed for a couple of hours. Immediately after confirming that the women entered the shrine, the chief priest closed down the shrine to perform “purification rituals” which took an hour.

CPI(M)’s state secretary Kodiyeri Balakrishnan said the chief priest (tantri) is taking on the judiciary. “What he has done is nothing but contempt of court. We will ask the government to take this matter to the court,” he said.

On the other hand, the BJP claimed that the state government is conspiring to malign the traditions of the temple. P.S. Sreedharan Pillai, the state president of the party, said the party would elevate the protests to the national level. The party would fully support the hartal called by the Ayyappa Karma Samiti (Action Committee for Lord Ayyappa), he said.

BJP-RSS workers have already taken to the streets, protesting against the women’s pilgrimage. Clashes with police have been reported in several parts of the state. Many, including police, have been injured.

Hindu Aikya Vedi leader K.P. Sasikala also announced a hartal, warning the government and the CM of dire consequences for his “betrayal of the Hindu community”.

It is unclear what impact the historic entry will have on the state’s polity. The BJP and the opposition UDF, led by the Congress, are on the same page. They are competing to project themselves as the “saviours of the devotees”.

On the other hand, Pinarayi Vijayan, who has handedly taken on the combined right-centrist onslaught, has got a life line. He was accused of playing a double game by not taking sincere steps to facilitate women’s entry to the shrine. This was gaining momentum after the feminist collective, Manithi from Tamil Nadu, failed to enter the temple due to stiff resistance from the Sangh parivar. 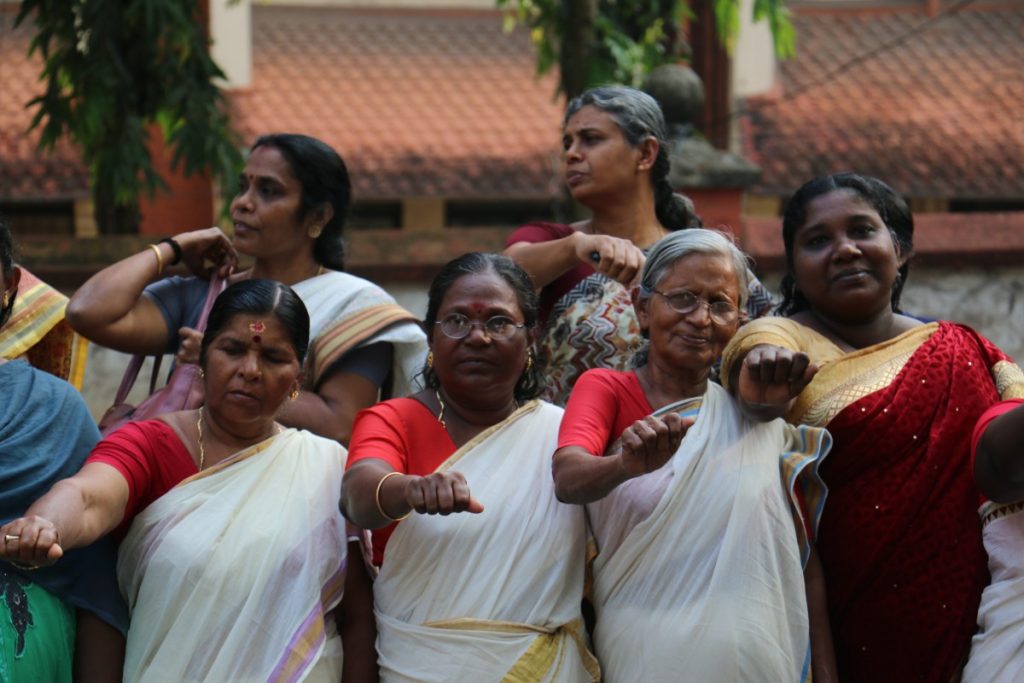 ‘The women’s wall was the proclamation that Kerala’s women stand with progressive thinking. It is a warning against the conservative and communal forces which are denying women their constitutional rights and renaissance values. The entire women society in the state, irrespective of their caste- religious and political affiliations, stood with the wall. They ignored the resistance to uphold the state’s dignity,” Pinarayi Vijayan said.

Despite having political differences, many civil society groups participated in the wall, while other opted out.

“In my opinion, Kerala renaissance is an ideological construct. It is not the mere imitation of the eurocentric concepts of constituting the history of modernity. It was willfully and consciously made to establish the historicity of what was later referred as another achievement namely the Kerala model. It is a conscious effort to consolidate all the progressive social changes that were brought about by the missionary programs and the colonial rule under one single idea of progress. It also deliberately attempted to distort the historic Dalit struggles that happened in Kerala,” said Dr. T.T. Sreekumar, a staunch critic of the CPM-led government.

Other lauded the wall. As author K.Satchidanandan wrote on his Facebook page:

“I would like the Government of Kerala to declare January 1 as the Kerala Women’s Day, considering both that it made the entry of women possible in Shabarimala and that women proved the strength of their sisterhood by forming a human wall, a fortress more than a wall,transcending class, caste, race ,party, religion and creed- as it consisted of Christian ,Muslim, Dalit and Adivasi women and women from every caste and religion including nuns, believers and non-believers, Gandhians, Ambedkarites, Marxists and women from diverse ideological backgrounds besides trans-women. I do not mean that the wall should be repeated every year, but there should be active discussions around women’s questions and huge women’s gatherings to celebrate womanhood, woman’s body and woman’s independence from patriarchy and oppressive and disabling social and religious customs and taboos of every kind on that day- not that it should not happen every day. Let women set their own agenda and discuss the ways to implement them.”

The entry of the two women to the shrine immediately after the women’s wall has changed the dynamics in the state once again in favour of Pinarayi Vijayan. He has re-emerged as a leader with conviction and determination. It is learned that the chief minister put a even kept his cabinet colleague in charge of temple affairs in the dark about Bindu and Kanakadurga’s visit to the temple.

The coming days will be a real test for the government as violence has already broken out, but as of now, the intelligentsia in the state has been left with no other option but to align with the chief minister.