A Year Since the Lockdown, Women Migrant Workers Remain Unrecognised

Although for the first time, the government has brought out the National Policy on Migrant Workers, put together by NITI Aayog, it spectacularly fails in considering the issues of women, who constitute a significant number. 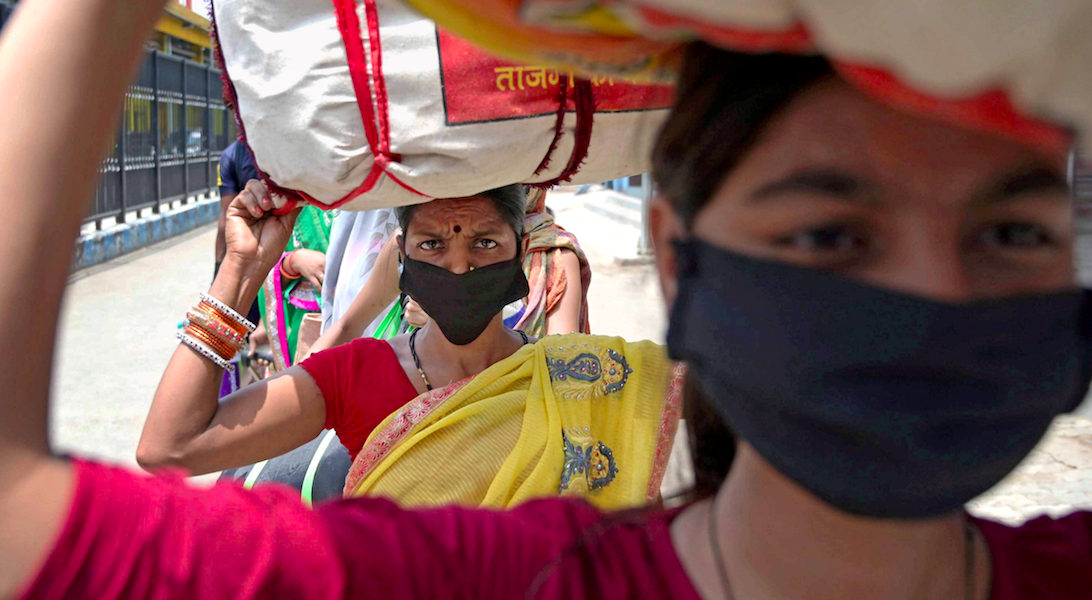 Migrants, who have arrived from Surat in Gujarat, walk to board buses to reach their native places, in Prayagraj. Photo: PTI

It has been a year since a poorly planned and violently implemented lockdown led to the forced displacement of migrant workers from our cities. Countless stories of violence, hunger, death and apathy were reported, and many continue to face precarity, unemployment and uncertainty even today. Many issues related to denial of rights, legal protection and recognition continue to plague the government’s response and recovery plans.

One among them is the absence of a gender lens in addressing the vulnerabilities and insecurities faced by migrant workers. This gap, among many others, seems to persist in the first draft of NITI Aayog’s National Policy on Migrant Workers.

Recently, highlights and recommendations from this draft were released across several media outlets, which shows specific needs and gender-based vulnerabilities of women migrants remain unrecognised. This precludes its rights-based approach and objectives of “facilitating internal migration… (through) enhancing individual agency and human capabilities”. While we await the final policy, this omission should alert us to the pervasive invisibility that women migrants have endured.

The status of women migrant workers

Even within the scant official data available on short-term migrants, who form the most vulnerable proportion of internal migrants, women have been grossly underestimated. A large part of female labour migration is linked to marriage and/or movement with family. Women’s decisions to migrate are mediated by their location within homes, individual and household-level socioeconomic conditions, as well as gender-based discriminatory practices.

As a result, women’s work-related migration often gets discounted. Therefore, it needs to be reaffirmed that a significant proportion of women, migrating independently or with family members, do take up various forms of paid work in cities. The Working Group on Migration’s Report released in 2017 had noted that “women who move for marriage are a majority of the female workforce in India”.

The nature of employment in the urban informal economy makes women migrants further vulnerable to invisibility, lacking protection. A large proportion finds work in sectors such as domestic work, home-based work, informal manufacturing, or construction work. Employment in these sectors is highly informal – there are no written contracts owing to which they routinely face coercive and exploitative work relations. Migrant women often have limited control over earnings and long working hours. They also regularly work in unsafe conditions and face various forms of gender-based violence. 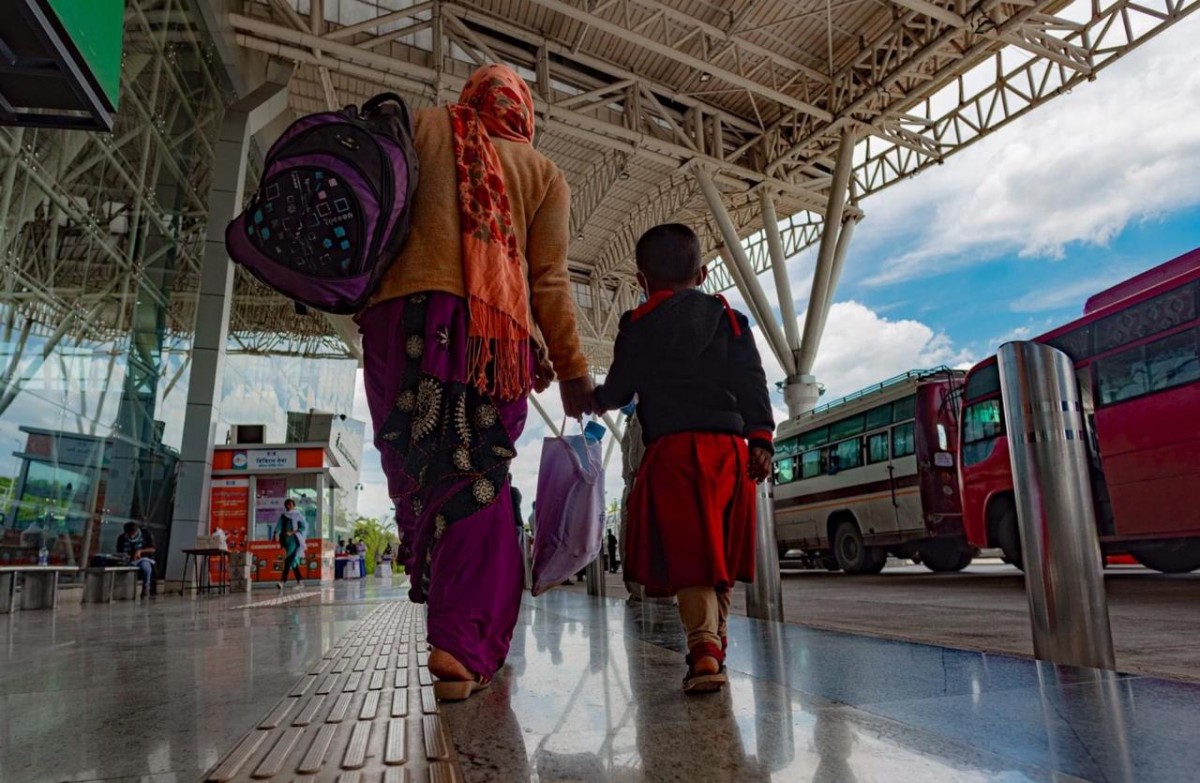 Migrant workers leaving Hyderabad after the lockdown was announced to curb the spread of COVID-19. Photo: Devjyoti Banerjee

Labour markets in these sectors are highly gender-segregated with women typically finding low-paid and low-skilled work. Data from the Periodic Labour Force Survey 2017-18 shows that women informal workers almost always earn less than men and are more susceptible to lower than minimum wages due to under-valuation of work. Such a wage gap is common across most of the prominent sectors of employment.

In addition to wage inequality, women are employed at the lowest skill levels and in occupations rarely identified as skilled. Moreover, gender plays a crucial role in mediating work outcomes right from the time of hiring. Female labour migrants in sectors such as construction or domestic work are hired through layers of formal/informal intermediaries and as part of systems that do not recognise them as workers. As a result, women migrants occupy the most precarious jobs in our economy. Even during the pandemic these were among the worst affected sectors and recovery has been sluggish.

A third factor that needs consideration in addressing female labour migration is urban planning. Our cities are increasingly being designed with the male white-collar worker as the norm. Such ideals exclude a large section of the working poor as beneficiaries and co-producers of city spaces, aggravating their access to basic services such as housing, sanitation, drinking water and public transport. Migrant workers, particularly short-term migrants and women, are more vulnerable in this regard.

The costs associated with the inability to claim rights and access basic services are disproportionately borne by women in the form of higher unpaid work burdens. Women have to spend long hours on-foot in accruing these services which reduces time available for paid work. Additionally, women face added risks associated with safety and gender-based violence due to the non-provision of crucial services such as housing, public toilets, public taps and affordable public transport.

It is these nuances that one hopes to find in the final draft of the National policy. Integrating the economic realities of migrant women requires a stronger will to tackle structural challenges around visibility and recognition. For instance, if the complexities in their mobility make it harder for targeted policy, how do we ensure that migrant women are not left out of social protection nets and other schemes?

One way is through comprehensive and rights-affirming legislations to all informal workers. This was also what the Working Group on Migration had suggested in 2017. Furthermore, enhancing women migrant workers’ agency would mean adopting a legal framework that specifically recognises protection and social security to domestic workers, home-based workers, and women in the construction sector. This would include ensuring the implementation of universal wage equality, minimum wages and occupational safety. However, with the passing of the Labour Codes, we are further away from such a framework.

Migrant women are estimated to be the most vulnerable to precarity and job loss over the next decade due to long-term technological advancements such as artificial intelligence. Already, the pandemic has deepened the extent to which technology mediates work, even in sectors such as domestic work and home-based work.

In this light, there need to be concerted efforts to target women in the informal economy, and particularly migrant women, for training and upgradation of skills. Such interventions should seek to dismantle gender-based recognition and designations of skills and take into account the accelerated role of technology in shaping the future world of work.

Most importantly, while measures to enhance the portability of voting, access to health and social security are laudable, they should account for the specific needs of women workers. These include quality and affordable child care, pedestrianisation of roads, street lighting, affordable and accessible sanitation, reliable public transport services, and comprehensive sexual and reproductive health services. These need to be integrated as key public services in advancing collective ownership of cities. Many of these changes have to accompany a radical re-imagination of who the city belongs to, who it is built by and who lives in it.

Abhishek Sekharan works as a Research Consultant at the Institute of Social Studies Trust, New Delhi.