To Stop Violence Against Women, We Must Start Asking Ourselves Some Questions

What do we owe and what are our obligations, aside from just expressing dismay staring at our smartphones? 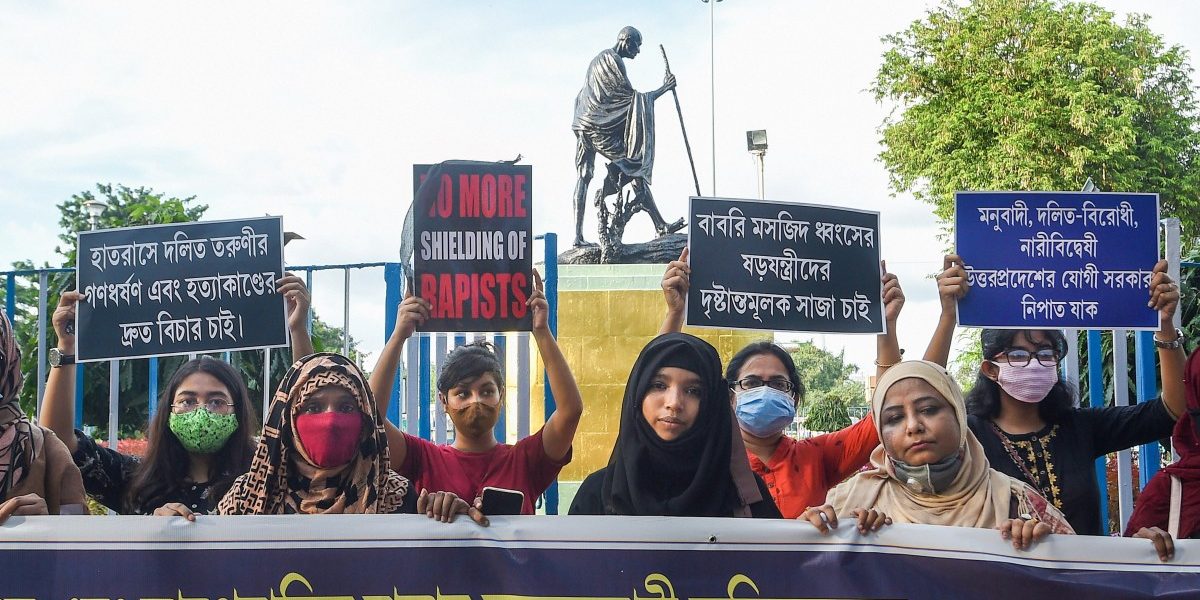 The brutal gang rape of a 19-year-old Dalit woman in Hathras and her subsequent death should shock everyone’s conscience. The cruel and vicious manner in which four men, supposedly from a dominant caste, attacked an innocent young woman, leaving her paralysed with severe injuries to her spinal cord, serves as a dreadful reminder that as a nation we have once again failed our country’s daughters.

Cutting her tongue and attempting to strangulate her is nothing short of barbaric and reflective of our failure to cleanse the deep societal malaise which has systematically crept in. The fact that our society continues to be divided across religious, class, caste and economic lines, where the ‘superiors’ feel they have a right to subjugate the supposed ‘inferiors’, is a failure of our polity to instil within the populace the constitutional values of equality. The belief that the powerful can get away, and a different system applies to them, is a failure of our administrative authorities who need to immediately address the existing imbalance. Such repeated incidents are a failure of policing in our country and, in a nation governed by the rule of law, also of our criminal justice system.

One had thought that the Nirbhaya case of 2012 would have served as a wake-up call. But 2013 witnessed the Shakti Mills gang rape case, followed by the Baduan gang rape and murder in 2014 and then the infamous Sivaganga and Kandhamal gang rape incidents in 2015. The subsequent year marked the Bulandshahr gang rape and in 2017 the Unnao gang rape came to be recorded. Last year had many ghastly incidents of gang rape; first of the Hyderabad veterinarian, followed by a similar occurrence in Buxar. These repeated incidents are a reflection of our collective failure as individuals and a testimony of the depravity in our human values. But above all, they are a manifestation of our patriarchal ridden society and a culture that normalises sexual violence. Immediate change is needed.

Madhumita Pandey, a lecturer in criminology, conducted the first of its kind research where she interviewed several hundred convicted rapists. She concluded that when you talk to the accused, “you realize these are not extraordinary men, they are really ordinary [part of our own society]. What they’ve done is because of upbringing and thought process.” She goes on to state that a commonality in everyone she spoke to was a sense of entitlement, which pointed to a male privilege in Indian culture and society. Pandey further notes that “a lot of these men don’t realize that what they’ve done is rape. They don’t understand what consent is.”

The Justice Verma Committee constituted in the aftermath of the Nirbhaya case noted that if “necessary steps are not taken by the State to provide basic amenities and guarantees in line with the Constitutional mandate, the State runs the risk of alienating its own citizens.” The state has clearly failed in its duties, as there is only a steady increase in these atrocities. The latest National Crime Records Bureau data reveals the crime rate per lakh women population has increased to 62.4% in 2019, in comparison to 58.8% in 2018. Shamefully, rape is one of the fastest growing crimes in India.

No matter how enraged we are today, the demands for the immediate death of the accused and their public shooting, as alleged to have happened after the Hyderabad incident, doesn’t bode well for a country where due process was afforded even to Ajmal Kasab. In fact, as social scientists point out, there exists a complex relationship between punishment and sexual violence. Research associates from the Centre on the Death Penalty at the National Law University, Delhi, note that “to believe that the death sentence is a solution to violence against women, so deeply embedded in society, is to provide a false sense of security to women. It is also no more than a knee-jerk reaction of the State to a problem that has grown wildly beyond its control; the death sentence, at most, is a consequence not a solution.”

Therefore, while candlelight processions and marches are needed to bring about accountability and to create public awareness, our rage really needs to make way for action. Before we start asking others for answers, we all need to ask ourselves some questions on what we, each one of us, can do in our microcosm to bring about change. What do we owe and what are our obligations, aside from just expressing dismay staring at our smartphones?

We can begin by directing our attention towards “structural societal change that addresses the asymmetric power relationship between men and women in our country.” This needs to be followed by a deep cleaning of our thought process and a drastic change in our social conditioning. We also need to change our inherent attitude towards women and the role which our culture historically attributes to them in our society. It sounds rather simplistic but, really, we need a reform in our perception and psychological outlook which routinely promotes inequalities against women. As a society we need to promote alternate forms of masculine expression.

The rancorous Nirbhaya attack in 2012 and the several subsequent incidents should serve as an unpleasant reminder that we can no longer wait. We need to collectively act in a constructive manner and we need to act in the here and now. If we don’t, there will come a time when that flickering flame in our hearts would get extinguished, burnt out or just blown away. And then, each of us would be complicit the next time another daughter of our country is brutalised.

Satvik Varma is an advocate based in New Delhi.