The real victim of the anti-Romeo squads seems to be the idea that men and women in UP can share healthy relationships. 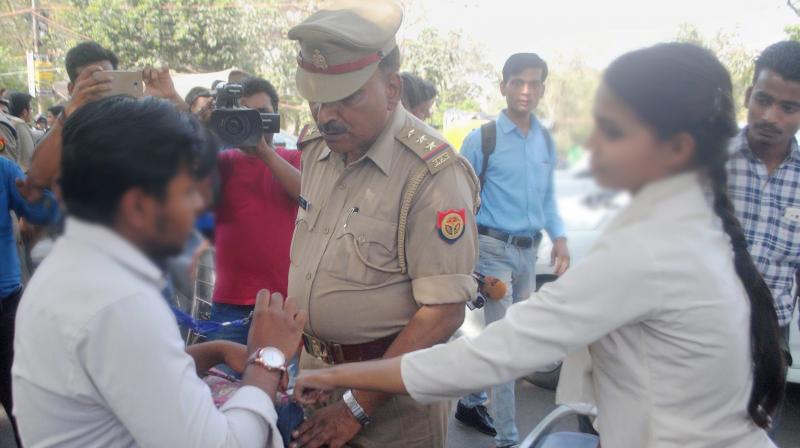 A police member assigned to an 'anti-Romeo' squad hauls up a young man in Lucknow. Credit: PTI

“Yeh toh hamaari sixth eye hai (This is our sixth eye),” says Vijay Lakshmi, station officer (SO) at the local police station in Chitrakoot district. She is in charge of all “Romeo-related activities” in the area. Or, to re-phrase that, she is the minion, the foot soldier, the official face on the ground of a policy that was implemented to combat hard crime in a state that according to the most recent National Crime Records Bureau data, holds the questionable distinction of being the worst when it comes to crimes against women.

Vijay Lakshmi is referring to the strategy she deploys while spotting these potential harassers or rapists, which more often than not, reads like a list of trending fashion statements in Bundelkhand – “kala chashma”, “top three shirt buttons undone”, “bikes”.

Though violence against women is not a laughing matter, the officials ensuring the execution of this well-intentioned policy on the ground seem quite amused. The chief invigilation officer at Banda manning the ‘anti-Romeo squad’, Rakesh Kumar Mishra, is definitely suppressing a smile when he tells us how vigilance has been tightened around areas “young girls and women frequent and/or are likely to be found”. Even as that urges a million more questions, he adds that they’re also most active during the “time(s) of the day” when women are mostly out and about, apparently.

But how do they spot a potential harasser, we insist? The identity of the “Romeo” is ascertained, we’re told, because it’s obvious – he allegedly wears it on his sleeve. “Asamajik ladke”, he calls them. Plus, the cops have “experience” and “vivek (good sense)” to boot: the same good sense they use to summarily dismiss cases of violence that come to their notice almost every single day.

“Anti matlab viruddh (Anti means against),” explains SO Anupam Shrivastav at the Banda thana, who keeps an ‘anti-Romeo register’ – “aur Romeo matlab aise ladke, toh uske anti (and Romeo means boys like that, so against them).”

We met with some of these “aise ladke”, the Romeos – the register holds contact details – and found the stakeholders in this scenario who have been left un-amused. “I was just driving past the coaching centre after dropping off my uncle to the station, and the cops flagged me down. They said they were cutting a chalan for me, they asked for Rs 500.” Abhishek Kumar argued with the cops initially, showing them the vehicle papers, certain that he had been stopped for driving without a helmet. But he was being flagged under the anti-Romeo directive, he was informed. Abhishek had to finally wake up his chhote mamaji to bail him out. Why didn’t you ask them for the receipt, we asked, but Abhishek just shrugged, “Who’ll argue with them? They might do worse.”

The anti-Romeo idea was originally the brainchild of BJP party president Amit Shah; during the campaign for the 2017 Lok Sabha elections in UP, Shah had announced how it would be a special team of officers whose sole duty it would be to patrol the spaces outside colleges, so that girls could “study without fear”.

In 2018, a year after Adityanath was sworn in as chief minister, Vrishabh, standing outside his college in Jhansi, tells us that the “masti” they would all indulge in, as college-going friends, has been on hold, thanks to the squads who ask one too many questions if they see girls and boys hanging out together. Ashish Gupta, a student in Banda, is livid, reflecting on how the landscape around Nawab Tank, a local popular youth hang-out, has altered ever since anti-Romeo squads became the rage. “What was a friendship has been labelled as something wrong.” So healthy relationships between girls and boys – possibly the thing that perhaps comes closest to being the panacea for the social mindsets that perpetuate violence against women – has suffered, it seems, through this process of implementing a policy that was meant to combat violence against women.

When news reports of a few girls hanging out in a Lucknow park being troubled by a squad member surfaced, the chief minister intervened. Weighing in favour of the popular vote, he seemed to take a stand on what was increasingly headed for a free-for-all scenario, and made a statement about how consensual couples should not be bothered as part of the new directive.

Young men in Banda speak of real fears over their careers, because imagine being labelled a Romeo in the midst of your struggle to make something of your life? As Shobhit, a Banda student, puts it, “It can affect your mental health, because one minute, you’re hanging out with your friend who happens to be a girl, or maybe dropping her home, and the next minute, you’re being hauled off to the thana, your family’s been called, and you’ve been labelled a Romeo.”