If it can be established that there was (a) no rape, and (b) no intent to murder, then the suspects, even if proven guilty, can get away with a sentence of culpable homicide not amounting to murder. Which is a fairly light sentence. 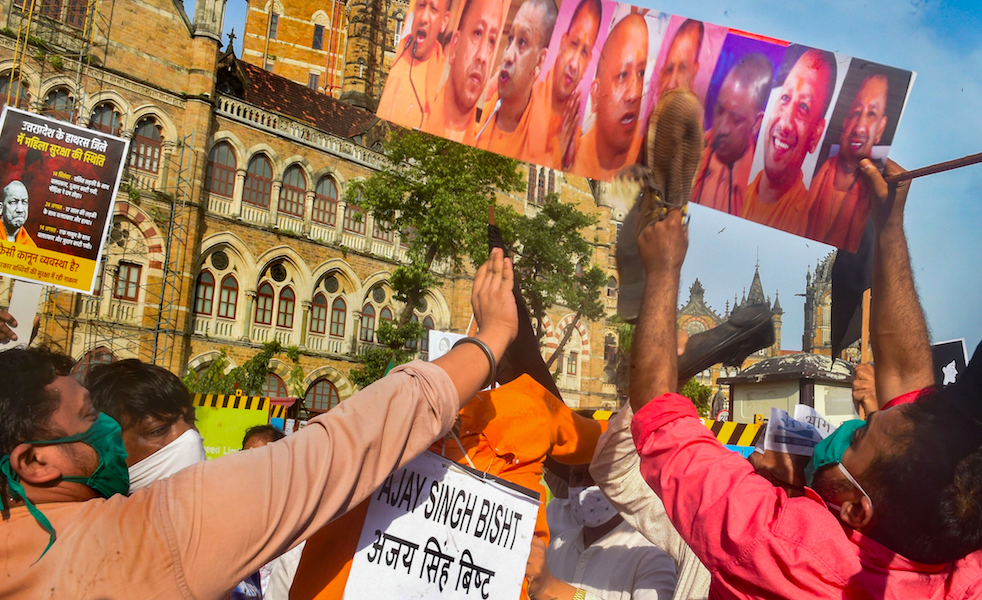 Protests against the Hathras brutality in Mumbai. Photo: PTI

The additional director general of police of Uttar Pradesh, one Prashant Kumar, has claimed that the young Dalit woman from Hathras who died two days ago was not raped as ‘no sperm samples were found on the body of the woman’.

This is an odd thing for him to say, for several reasons.

First, absence of sperm is not an indication that rape did not occur. The presence of sperm cells on any body is evidence of ejaculation, not necessarily of rape.

Just as most instances of ejaculation are not the conclusion or climax of an act of rape, so too, many rapes may occur without an ejaculation event. Those who confuse these two issues think that rape is identical with intercourse that ends in male ejaculation.

It need not be. Rape is not even primarily about sex, it is fundamentally about sexual violence and the assertion of power.

Sex and sexual violence are not the same thing. It is unfortunate that one has to even say this, but when senior police functionaries give voice to irresponsible and unscientific statements of the kind that the ADG of UP Police has made, then even what is banal and obvious needs to be stated.

In rape investigations, forensic analysis of biological evidence has to be undertaken – at the right time – based on samples taken, not just from the body of the victim, but also the the body or bodies of the suspect or suspects.

These traces can help establish the veracity, degree and nature of physical contact between the different parties and also whether or not there are signs indicative of violence, struggle and absence of consent. The ADG of UP Police has casually gestured to the forensic report of the victim’s body. He has not even bothered to mention whether or not forensic analyses of the suspects’ bodies were carried out.

#WATCH Postmortem report says victim died due to her neck injury. FSL report hasn’t found sperm in samples, making it clear that some ppl twisted the matter to stir caste-based tension. Such people will be identified & legal action will be taken: ADG Prshant Kumar on Hathras case pic.twitter.com/qMOUct7t92

Secondly, sperm cells, if present, and deposited on the body of the victim, are properly detectable only if vaginal swabs are taken within three days, and at the most, if cervical swabs are taken within seven days of the incident of sexual assault. Furthermore, the victim needs to have been in an unwashed state, when such samples are taken, and the collection of samples needs to be undertaken by a person trained in the collection of forensic evidence, with the aid of a proper ‘rape forensic kit’ and by following the correct sample collection protocol.

Can the ADG of UP Police say with any certainty that these conditions were met, in Chandpa village, where the incident took place, or in a certified medical facility in Hathras?

Were any proper forensic investigations carried out by qualified personnel at either of these stages? The Hindu reports that the gynaecological forensic examination of the victim was done at JNMCH Hospital in Aligarh on September 22 – eight days after the gang-rape – where the victim was subsequently taken for treatment, and samples sent to a forensic laboratory in Agra on September 25. 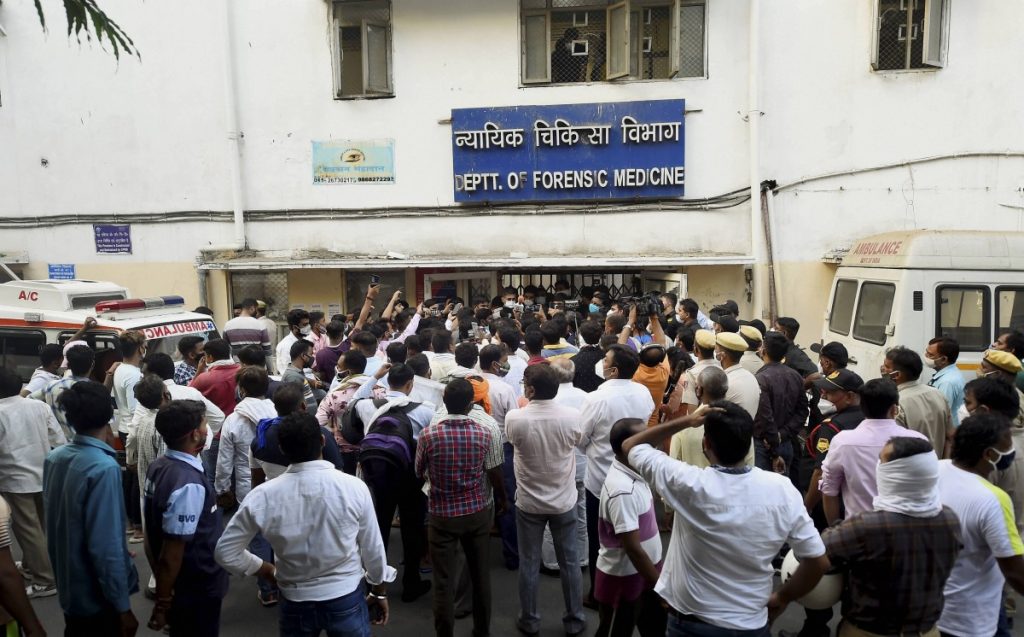 The Hindu report tells us exactly what the post mortem report says. The final diagnosis concluded that the cause or death is due to “alleged post strangulation with cervical spine injury with sepsis and cardiopulmonary arrest.”

So, by talking about the ‘absence of sperm being noted in the forensic report’ the ADG of UP Police is only trying to create a smokescreen.

There are other ways to forensically establish the incidence of sexual assault, but for that to happen, one has to have a body, and a proper post mortem, and forensic analysts trained and experienced in discerning traces of sexual assault by looking for signs of tissue damage, injury marks, inflammation, infection and other kinds of evidence.

Yes, there is a slim chance that the nail clippings (which can be useful in establishing the possibility of a physical struggle) may still yield contact DNA from the suspects’ bodies. But the time that has passed between the crime and the post mortem makes that increasingly unlikely.

The inordinate hurry and the surreptitious manner in which the Uttar Pradesh police ensured that the victim’s body was cremated (in the absence of the victim’s family) suggests that the police were trying to avoid precisely the possibility of a proper forensic examination.

They have succeeded. There is no body left to examine any more. Ashes can say nothing about rape.

But what we do have are the victim’s statements, and they say a great deal. These statements have been uttered and recorded while the victim was conscious and lucid, and show no signs of coercion. There is, by now, video evidence in which the victim has not only stated that she was raped, but she has also named the men who assaulted her, and has in fact stated that they had troubled her previously as well.

The words of a woman who died because of the suffering she had to undergo might count for more than the failure of a forensic report to note, at the right time, the presence or absence of sperm on her body.

So, what can be the explanation for this completely absurd statement from the ADG of UP Police?

We know now that the amended rape law provides for the death penalty for rapists in instances where death is a result of injuries sustained during rape. I am categorically against the death penalty in all instances, and will oppose it here as well. But that is a different matter. This does not mean that I am against stringent punishment for the accused, if they are found guilty.

But the way things are going in the wake of the UP Police ADG’s statement, I am not at all certain that a rigorous investigation or prosecution is on the cards.

Rather, if it can be established that there was (a) no rape, and (b) no intent to murder, then the suspects, even if proven guilty, can get away with a sentence of culpable homicide not amounting to murder. Which is a fairly light sentence.

If it is further established, as the ADG Police of UP is stating, that the accusation of ‘rape’ is being made only in order to foment ‘caste enmity’ and disturb ‘social peace’, then it could even be argued that the provisions of the SC/ST (Prevention of Atrocities) Act are not applicable in this case, as the ‘absence of rape’ is proof that the violence faced by the victim was in no way connected to her caste identity and simply a result of a persistent ‘feud’ between two families.

The consistent noise in sections of the right wing media in order to try and persuade people to see the crime ‘outside’ the framework of caste is already contributing to this narrative.

Further, The Wire report that listens to the family of the victim contains an important revelation. One family member can be seen saying that for the past two weeks there had been considerable pressure on the brother of the victim to go to Lucknow, the state capital, and meet with political leaders to work out an ‘understanding’. The relative says that the brother refused to go as he was more concerned about ensuring that the victim got proper medical attention, which required him to be with her constantly. This statement is a testament to the fact that the administration and political leadership of the ruling party were anxious to ‘settle’ the matter before it got out of hand.

All these are tell tale signs that indicate that the protocols of the ‘Thakur Raj’ of Ajay Singh Bisht-ruled Uttar Pradesh are working overtime to ensure that the suspects, if at all found guilty, get away with lax prosecution and feather-lite sentences handed down to the accompaniment of a few pious homilies about safeguarding traditional values.

That’s the direction in which the ball thrown in the air by the ADG Police of UP is set to land, and roll. Let’s see who picks up this ball, and who does not.

Meanwhile, a blue chip PR firm is already sending journalists, editors, ‘opinion makers’, ‘influencers’ and news anchors files of processed disinformation with the ‘no sperm’ theory dressed up to look like ‘forensic evidence’.

Also, BJP ‘IT Cell’ heads in different states are getting active and passing around conveniently edited videos of the victim to bolster the ‘no rape’ hypothesis.

Why a government and a police department should have to rely on the services of a PR firm and the IT cells of a political party defies reason. Or then again, maybe it does not.

Anything is possible in their so-called ‘Ram rajya’.