Women scientists are increasingly taking matters into their own hands to fight gender gaps in the field, supporting each other in the struggle for a level playing field. 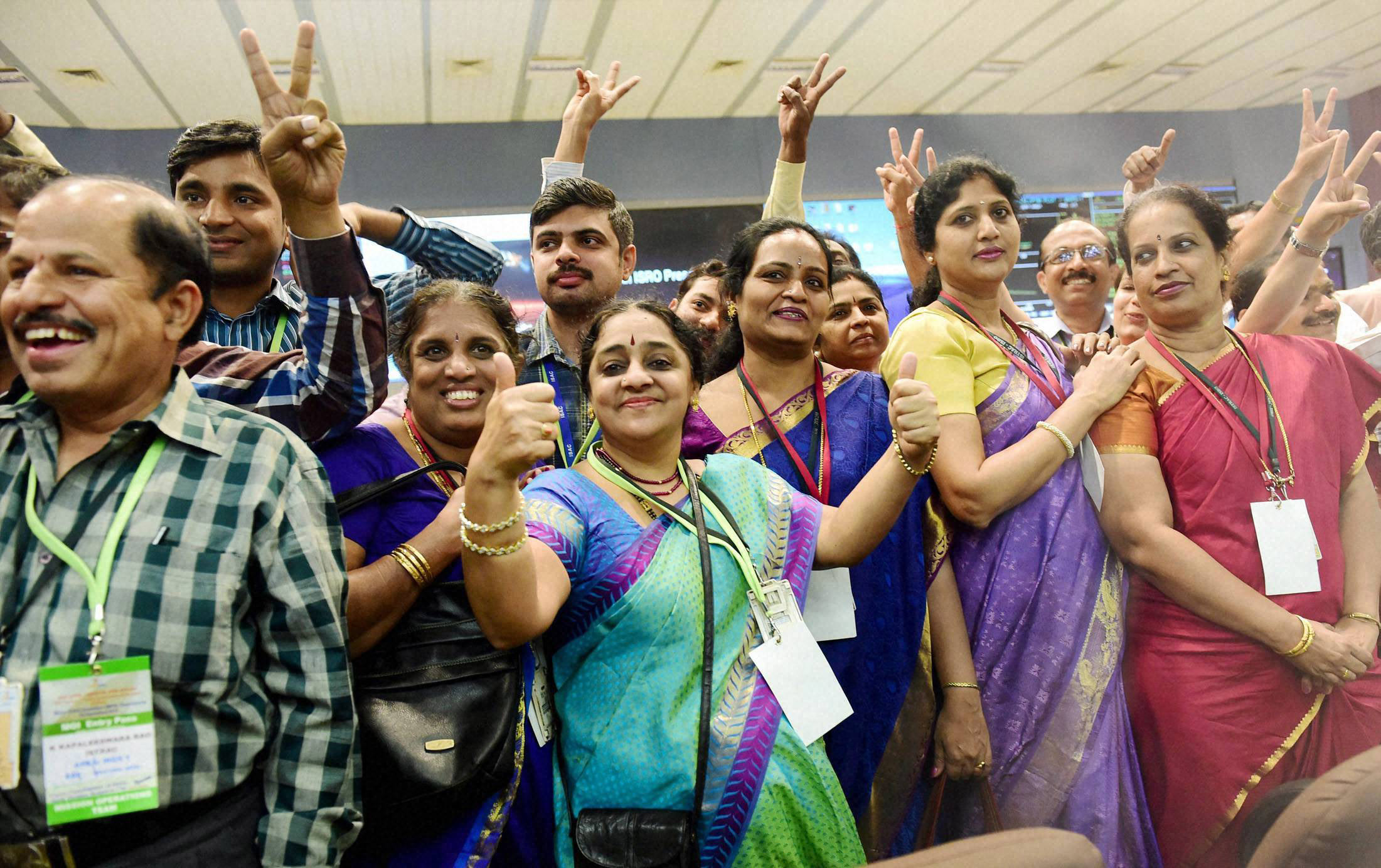 This photo taken at ISRO after the success of the Mars Orbiter Mission is one of the few times women scientists gained visibility in eyes of the common people. Photo: PTI/ Shailendra

Maria Thaker, an assistant professor at the Indian Institute of Science (IISc), Bengaluru applied for tenure, according to an article published in eLife, but her application was turned down. “The all-male panel did not factor in her six-month maternity leave, and compared her against a male colleague who had more publications. The result was that she received a three-year contract extension instead of tenure.”

All over India, women in science face similar biases as they navigate the patriarchal field of science. And these prejudices are reflected in the numbers – while women make up around 40% of the numbers at the undergraduate level in science, only 25-30% of the PhD workforce is made up by women. And the situation only gets worse thereafter – only 15-20% of science faculty are women and the numbers dwindle as one goes higher up.

India is one of the largest players in science and research, currently publishing over 100,000 peer-reviewed articles in science and engineering in 2016, making it the third largest producer of scientific articles in the world. But the existence of gender biases and related issues preempts the creative, intellectual and scientific contribution of women, who make up 50% of society.

In Thaker’s case, she enlisted the help of the chairs of biology at IISc and Sandhya Visweswariah, who heads the Indian Academy of Sciences Women in Science panel, to help fight her case. And this lobby resulted in an institute-wide policy change to take into account the time that a woman spends away from work during pregnancy and after childbirth while making tenure decisions.

The system in place at the institute now allows women to ‘stop the tenure clock’ for one year per child, along with a maximum of two-year extension. Visweswariah noted that male colleagues often fail to understand that it takes some time after childbirth for the body to return to normal.

Women face a myriad of issues in the field, but the biggest reasons for the drop in numbers with PhDs and faculty positions seems to be explained by the fact that they come right around the “child-bearing age” for women and the perceived inability of women to manage a career and a life.

According to the Association of Academies and Societies of Science in Asia (AASSA) report, the proportion of women in science who never married (14%) was much greater than male scientists (2.5%), which along with the observation that more women have spouses within the field (40%) than men do (19%) hints at the existence of a work-life tradeoff in science for women.

“The crucial period after your PhD coincides with the period when some women decide to get married or have children. Naturally, you tend to lag. Unfortunately, we can’t give up on that role of motherhood. But if we want to become scientists, we have to work twice as hard as men,” Aruna Dhathathreyan, who retired as chief scientist from Central Leather Research Institute two years ago told LiveMint.

She also pointed out that taking a break from research can lead to a situation where your work becomes outdated, due to the fast-paced nature of the field. And women, who are often entrusted with the entire responsibility of a family, then find it difficult to stay relevant.

The Indian government offers fellowships to women between the ages of 27 and 57 years who took a break to help them return to and establish themselves in mainstream science research. These women scientists’ programmes are an important step forward in bridging the gender gap in science and engineering. But the bigger step that needs to be taken is at the level of individual institutions and, more importantly, at the level of individuals, to educate people that it is not impossible to balance career and family and to encourage women to pursue fields like science and engineering.

Women scientists have started taking matters into their own hands, to provide necessary assistance to each other and make science a more level playing field. Across the country, they are speaking up and coming up with childcare and tenure solutions to help each other.

Mayurika Lahari, assistant professor, cancer biology at Indian Institute of Science, Education and Research, Pune, started a “daycare revolution” on the campus. Fuelled by her own child’s needs of a creche, Mayurika worked hard to set up and chair a daycare committee at the institute. The centre, called Hullabaloo, now serves around 50 children of IISER teaching and non-teaching staff, as well as research institutes in a radius of 2 km from the campus.

“It is very important to have a daycare facility on-campus. When I’m working I don’t even think about my child because I know she’s safe. My research has benefited from the daycare. I am able to spend more time here… till 6:30 the whole time is for me and my students,” she told the Life of Science. The government has since made it mandatory for all government-run institutes to have a creche on their campus.

Many people came together to fight biases against women obtaining a tenured position, which resulted in establishing a new system of ‘pausing the tenure clock’ for women in cases of maternity. Similar battles for spaces for breastfeeding, childcare and promoting hiring “two-career couples” are being fought across the country.

Facilitating women to excel in science

Vidita Vaidya, a neuroscientist at the Tata Institute of Fundamental Research and part of the Women in Science panel, thinks things will change quicker if the government adopted a uniform policy across all the institutes it runs. “These policies should not have to be reinvented every single time in every single institution all over the country,” she told eLife.

Many women researchers agree that a supportive family is necessary for them to concentrate on their research without having to worry too much about family responsibilities. According to Nandita Jayaraj, one of the founders of the website Life of Science, “a solid support system”, including a supportive spouse, is essential for success in the field.

The AASSA report recognised that a dearth of mentorship causes many women to drop out, given the lack of people to look up to and relate to. Ram Ramaswamy, at the department of physical sciences at Jawaharlal Nehru University, said, “Women in science need mentors that they can identify with, and that too locally.”

The book Daughters of Lilavati, released in 2008, sought to fill this gap by telling the stories of 100 women scientists in India. The title is a throwback to Lilavati, Bhaskaracharya’s treatise in which he addresses a number of problems to his daughter, Lilavati. This compilation of personal essays was an attempt to inspire young minds in the country and show them how women can succeed in academic environments across a range of disciplines.

Note: This article was updated on April 18, 2018, to clarify Maria Thaker’s position.